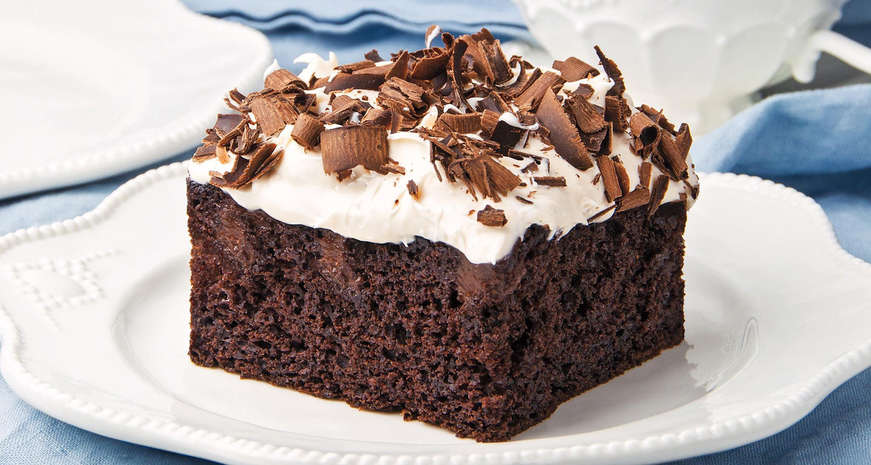 Bakers have been poking cakes so that sweet liquids can seep into them for as long as we've had modern-day ovens, but in the 1970s, "poke cakes" were big, thanks to a recipe from Jell-O that called for baking a white cake, letting it cool and then pouring hot Jell-O liquid in top so that it would soak into the crumb.

Modern bakers have revived this tradition by creating all kinds of Pinterest-friendly poke cake recipes featuring every kind of cake and filling you can imagine. Jamie Sherman, the blogger behind Love Bakes Good Cakes, recently wrote a book called "The Poke Cake Cookbook" that features 75 cake recipes.

Most of them call for starting with a boxed cake mix, but that makes the recipes approachable for even the most beginning bakers. Her recipe for a Mexican chocolate poke cake calls for adding cinnamon to the cake mix before proceeding with the instructions on the box. Once you bake and cool the cake for about 20 minutes, you can use the end of a wooden spoon to poke holes throughout the cake before pouring a cinnamon-spiced chocolate pudding on top. What puts this cake over the top is the decadent whipped topping made with cream cheese, dulce de leche and heavy whipping cream.

You can make the chocolate curls by using a vegetable peeler along the side of a bar of semisweet or milk chocolate.

Mexican Chocolate Poke Cake
It's easy to doctor up a chocolate cake mix to make this Mexican Chocolate Poke Cake. Adding cinnamon to the cake batter and poking it with chocolate pudding creates an awesome base for the decadent dulce de leche and cream cheese mixture that tops the cake. From "The Poke Cake Cookbook: 75 Delicious Cake and Filling Combinations" by Jamie Sherman (Page Street Publishing, $19.99).

Instructions
Prepare and bake the cake according to package directions, adding 1 teaspoon of ground cinnamon to the batter and using a 9- by 13-inch cake pan. Let the cake cool for 15 to 20 minutes. Using the round end of a wooden spoon, poke holes in the cake every 1/2 to 1 inch.

Empty the pudding mix into a medium-sized bowl and add the milk along with the remaining 1/2 teaspoon ground cinnamon. Whisk briskly until the pudding is dissolved, about 2 minutes. Evenly pour over the poked cake, filling the holes as much as possible. Place the covered cake in the refrigerator until the pudding is set, 2 to 4 hours.

Beat the dulce de leche and cream cheese on high speed with an electric mixer in a large bowl until well blended and smooth. Scrape down the sides of the bowl. Beat in the cream until stiff peaks form. Spread the frosting over the cake. Just before serving, garnish with chocolate curls. Store covered in the refrigerator.