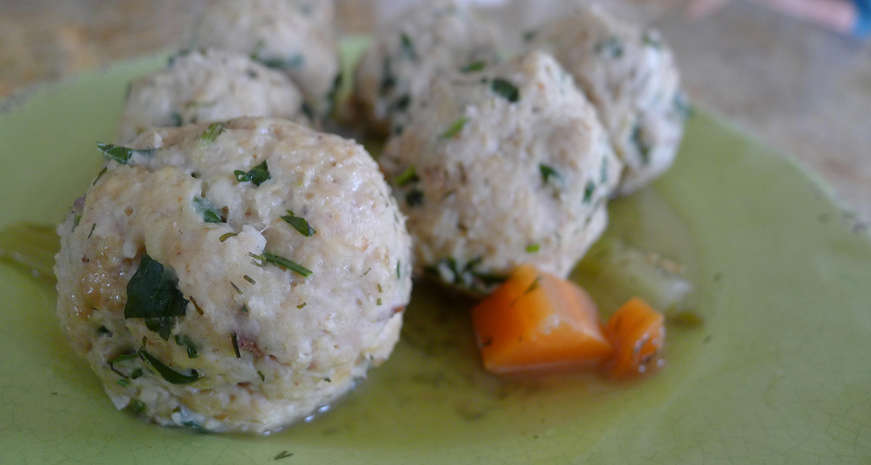 When I was a restaurant critic in Albuquerque, I reviewed a small Mexican establishment named Dahlia's, tucked into a strip mall on the city's west side. The meal had its ups and downs, but the highlight was as unexpected as it was impressive: a bowl of matzo balls worthy of my Jewish mother's respect.

Technically, they were albondigas, Mexican-style beef meatballs served in a shallow bowl of tomato-based vegetable soup. But they felt like Mexican matzo balls.

Mom's matzo balls were always my favorite part of Passover. They have a mellow, soothing flavor and a supple structure that absorbs broth without softening, and I could always count on the juicy, savory satisfaction of a matzo ball dunked in her dilly chicken soup.

Food and faith
Albondigas don't always taste like good matzo balls, especially Mom's, but Dahlia's had that general quality. I wondered if they had anything to do with the secret Jews of the Southwest.

For centuries, rumors have persisted of so-called "crypto-Jews" in New Mexico, old Mexico and Texas, and historians have gradually come to a consensus that the crypto-Jews were indeed real. And that they had good reason to keep their faith and rituals a secret.

The crypto-Jews are descendants of Spanish Jews who converted to Christianity — sometimes by force — to escape persecution during the 1300s. Many of these marranos, as they were called, continued to practice Judaism covertly, and some migrated to the New World with the Spanish colonists.

During the Inquisition, Spanish officials would go from village to village, asking residents if they had seen evidence of Jewish behavior among their neighbors, such as the lighting of candles on Friday nights, or avoiding pork. This attitude, understandably, kept Judaism underground.

Matzo vs. masa
In hindsight, I wish I had asked Dahlia the question that truly burned in my belly: "Is there matzo meal in the albondigas?" (Matzo meal being the pulverized matzo used to make matzo balls.)

I decided to find out for myself, by using matzo meal in a typical albondigas recipe in place of the rice or masa (corn tortilla flour) traditionally used. My plan: Make matzo albondigas, with chicken instead of beef, because they would be floating in chicken soup, like a matzo ball should.

I conducted side-by-side comparisons of my matzo albondigas against versions made with rice, masa and even a combination of matzo and masa. Only the pure matzo meal-based albondigas had that special quality, reminiscent of Mom's matzo balls or Dahlia's albondigas.

If you are attending a serious, traditional Passover seder, I don't recommend bringing these albondigas and attempting to pass them off as matzo balls. Not all Passover veterans are as tolerant as my mom. But you could bring them to a Mexican party, call them albondigas, and be fine.

Instructions
In a medium bowl, combine the matzo meal, pecans, salt, pepper, garlic powder and nutmeg. In a large bowl, combine the chicken, eggs, parsley and garlic. Add the dry mix and use your hands to combine well. Transfer to the refrigerator and chill for at least 30 minutes.

Divide the mixture into 15 walnut-sized balls. Drop them into the chicken soup broth and simmer, covered, over medium-low until tender, about 30 minutes. Serve.

Mom's Chicken Soup
If you're pressed for time, you can purchase a pre-cooked rotisserie chicken and skip the first step in the recipe.

Instructions
Heat the oven to 325 degrees.

Sprinkle the chicken with salt, garlic powder and and black pepper, and roast, periodically turning and/or basting the bird until it's as soft as a rotisserie chicken from the store, about two hours. (See note.) When it's cool enough to work with, remove the meat from the bones and refrigerate.

Heat the water to a simmer over medium-high heat and add the onion, along with the chicken bones and as much skin as you wish, as well as the pan drippings, reduce the heat to low, and simmer for 1 hour. Strain and return the liquid to the pot. Add the carrots, celery, lemon juice, 1 teaspoon salt, dill and any chicken meat you haven't already devoured, and simmer for 1 hour. Season with salt and dill. Serve.