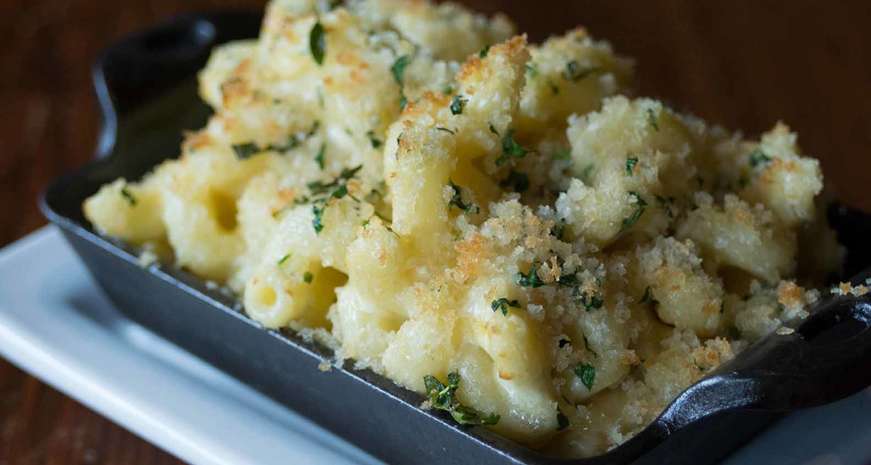 Our 10 favorite macaroni and cheese recipes perfect for lovers of cheddar, Gruyere and even Kraft singles

A beloved soul food, homemade Southern macaroni and cheese is easy to share, and even easier to eat on as an appetizer, side or even the main course. These 10 recipes make achieving that gooey goodness as easy as one, two, cheese.

Mac and cheese is one of the South’s most delicious, sharable and soul-settling foods, and we love it just as much as we are led to believe it loves us.

Here at Southern Kitchen, we don’t doubt for a second that your own macaroni and cheese recipe is the greatest mac and cheese recipe ever. But there's really no good reason why you shouldn't at least try a new recipe or two. So we’re passing on to you a few piping-hot takes on mac and cheese that are worth serving up as early as, well … ASAP.

With options for the beginner as well as the connoisseur and those somewhere in between, you’ll not only enjoy reading these picks below and eating what comes from them, you’ll also appreciate that they’re all as easy as they are cheesy (much like this joke). 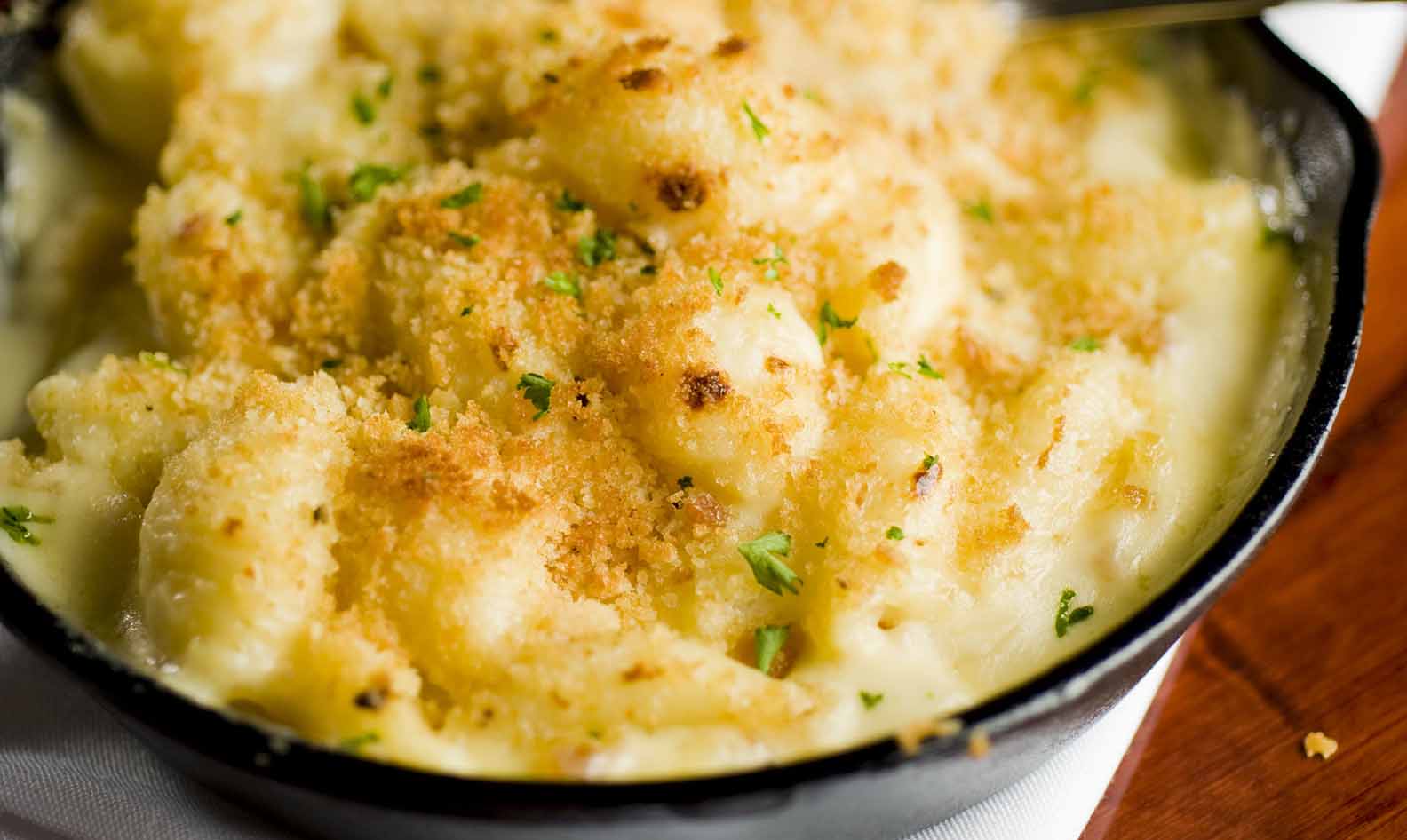 Baked Mac and Cheese
Using a blonde roux as a thickener will give you a mac and cheese that’s more stable in the oven, and will prevent the fat from separating in the sauce. This recipe is a good basic version, but you can add a little extra flair by sprinkling the top with Parmesan cheese, buttered panko bread crumbs or even crushed-up cheese crackers for texture. (We love flair almost as much as mac and cheese.)
Get the recipe

Triple Cheese Mac and Cheese
Many cooks believe in using a blend of cheeses in their mac. This is an opportunity to truly test the limits of your imagination by incorporating any combination of your favorite cheeses. And you shouldn’t have any misgivings about using a certain vilified processed cheese product – you might be surprised by what comes from even the most unconventional blend. Gouda, manchego, gruyere, taleggio, or even that stuff in the center aisle of the supermarket that starts with the letter V: all can be part of a delicious and unique mac and cheese. With a blend of cheddar for sharpness, Monterey Jack for meltiness, and Parmesan for saltiness, this recipe, which came to Southern Kitchen via Atlanta’s OK Café, is a nice jumping-off point for experimentation.
Get the recipe 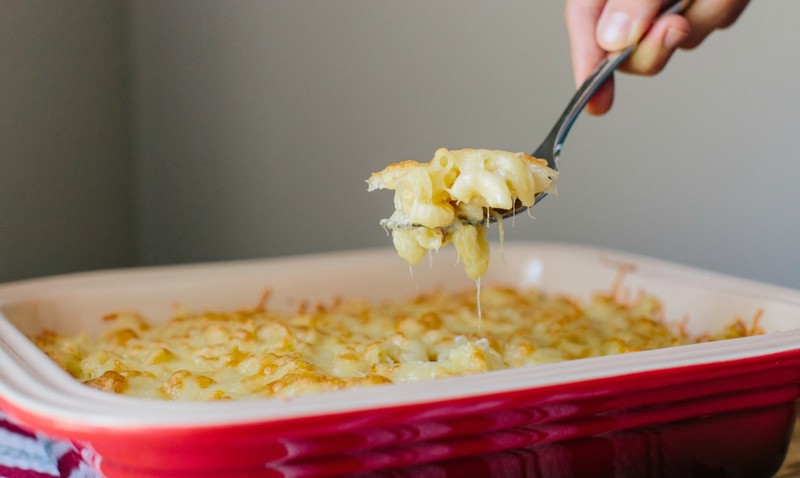 Extra Cheesy Mac and Cheese
This particular recipe uses a cream-based sauce with dry mustard, nutmeg and hot sauce added to cut the richness of the cheese. On its own, it makes a great accompaniment to any potluck or barbecued meat, but you can add additional ingredients to make it stand out. What sort of extras? Diced city ham and sweet peas is a classic combo, but lobster, crab, roasted cauliflower, asparagus, broccoli and sweet grape tomatoes would all make fabulous additions. The only rule? Use the sharpest white cheddar you can find to impart the most flavor possible.
Get the recipe

Cheeseburger Macaroni Casserole
There's nothing wrong with going a little wild on this list, and cheeseburger macaroni casserole is just the right wild for us. Between the ground beef and Monterey Jack cheese (obvious additions), this potluck-friendly dish gets moisture from cream of mushroom soup and fast food flair from ketchup, onions, steak sauce and diced tomatoes. It'll never be the prettiest mac and cheese around, but it just may be the tastiest.
Get the recipe 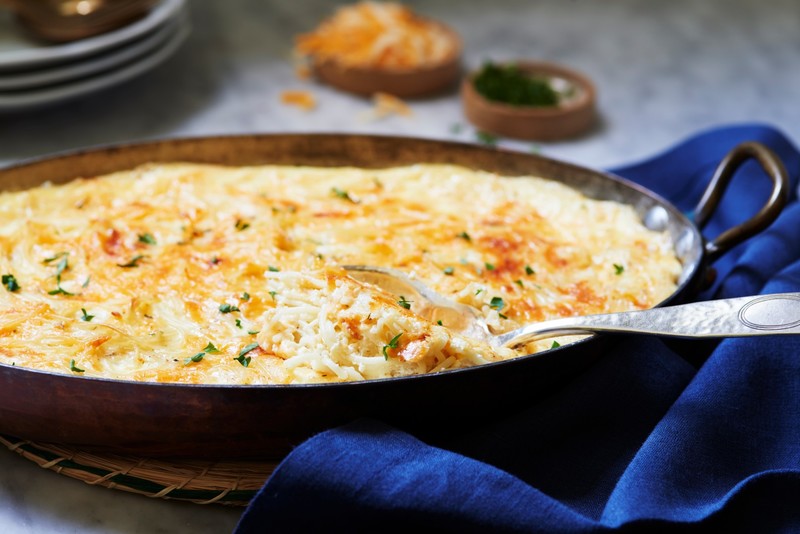 Anne Byrn's Macaroni Pie
For Anne Byrn's version of old-fashioned macaroni pie, she created a recipe for this famous dish that is quick and easy but also intensely flavored. Feel free to have fun with this recipe. You could go crazy and season the pasta with some pressed fresh garlic or dried oregano. And should the spirit move you to add some meat to this recipe, what about chopped prosciutto or minced country ham? Sprinkle that on between the layers of pasta, custard, and good Parmesan cheese. To pick up the flavors at the end, shower the top with minced fresh oregano or parsley and add a big grind of black pepper.
Get the recipe

Chilled Macaroni Salad
Does this classic picnic side count as mac and cheese? Well, it does contain both macaroni and grated cheese, so we're gonna give it a pass, especially since this old school combination of ingredients is just too darn tasty to pass up. An old Southern favorite from contributor Virginia Willis, it's got creaminess from mayonnaise (Duke's, of course!); crunch from celery, onion and carrots; and plenty of grated cheddar to make it official.
Get the recipe 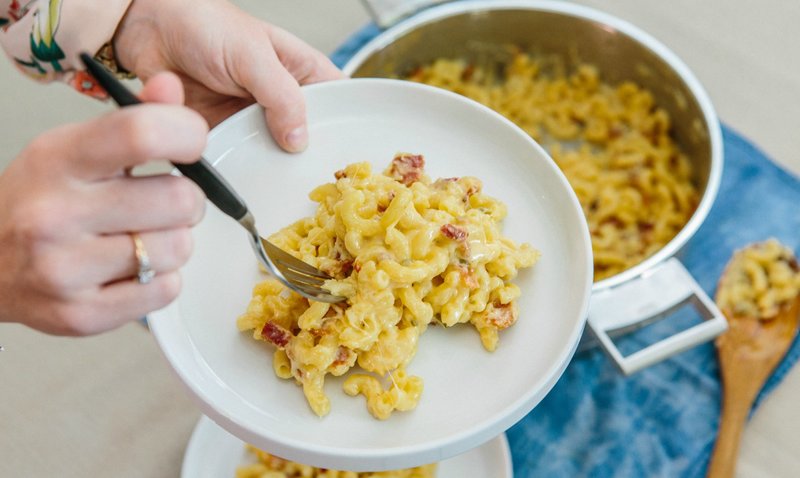 Bacon-Jalapeño Mac and Cheese
Everything is better with bacon — especially mac and cheese, and especially when you counter that extra richness with spicy pickled jalapeños. A triple cheese blend — Monterey Jack, Gruyere and cheddar — doesn't hurt either. Even better? This recipe gets cooked, start to finish, on the stovetop, so it's done faster than you can teach your five-year-old to spell macaroni.
Get the recipe

Chef's Morning After Mac and Cheese
Whether you're out at a bar with other restaurant chefs or just had one too many glasses of wine at a dinner party, a bowl of cheesy, porky pasta will certainly help sooth whatever's ailing you. And yes, hot dogs and bacon together may sound like a little much, but don't knock it 'till you try it, especially with a more-than-generous topping of Sriracha sauce.
Get the recipe 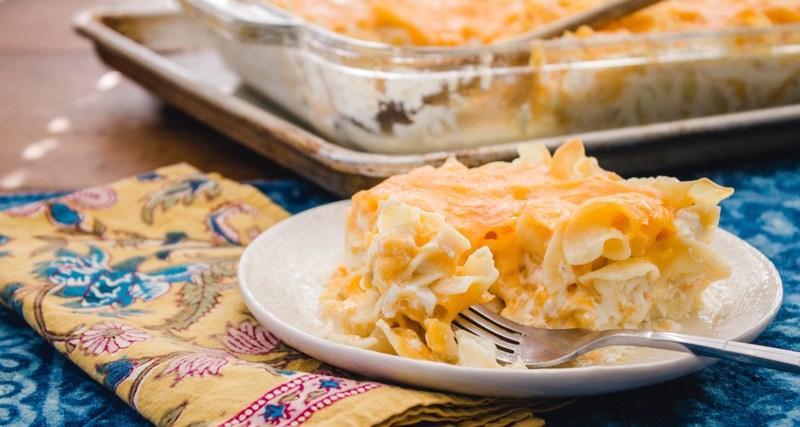 Old-Fashioned Macaroni and Cheese Casserole
Tired of all these wild mix-ins? Try this old fashioned, sliceable mac and cheese, made with eggs, milk and a generous amount of sharp cheddar cheese melted over the top. You can even get this one almost ready to go beforehand; just add the milk mixture right before you pop the whole thing in the oven.
Get the recipe

Truffled Mac and Cheese
There are two items that make this dish special: the white truffle oil, of course, and the 10-year aged white cheddar cheese. But don't expect to find these items in a regular grocery store. You'll need to make a special visit to an upscale grocery, farmers market or cheese shop. Ray's Killer Creek executive chef Daniel Frier says the aged cheese is worth the extra trip, but you can still get acceptable (though not as notable) results with extra-sharp cheddar from the grocery store.
Get the recipe 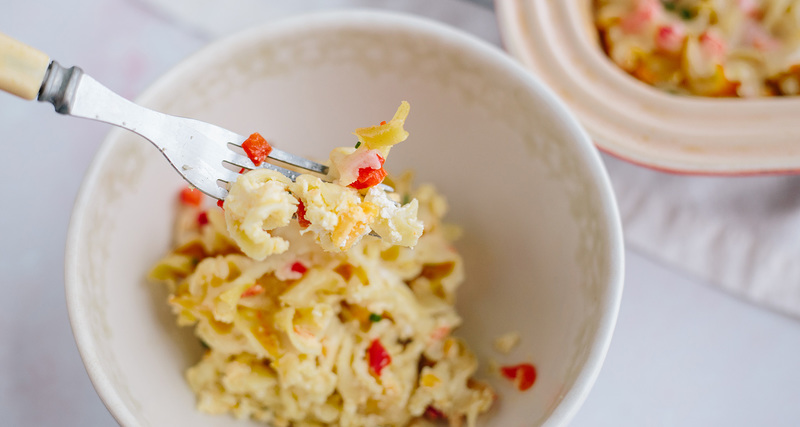 Pimento Cheese Noodle Kugel
OK, you got us — we added another totally non-traditional mac to the mix, but we promise it definitely belongs. Between the pimento cheese and the custard filling, this Southern twist on the homey Jewish classic is basically a pepper-filled version of macaroni and cheese casserole. Don't believe me? Try it and tell me it isn't mac and cheese in its heart.
Get the recipe