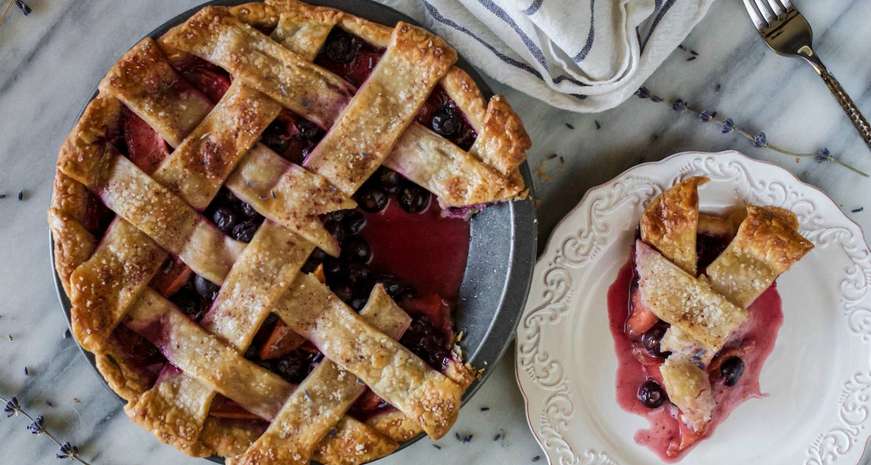 The beginning of this pie recipe doesn’t start like most. There were no nostalgic thoughts of grandma cooking something on Sunday morning after church, nor a dreamy memory of picking blueberries in North Georgia with family a year prior. No; it started on a mundane semi-annual run to the store for cleaning supplies.

With no plans for the day besides checking off my to-do list, I took the time to smell each scent of Mrs. Meyer’s dish soap before making my selection. As I picked up the lavender variety, one quick whiff had me shouting internally, “This would make a delicious pie.” But I wasn’t quite sure what seasonal fruit (if any) would mix well with lavender for a pie until another eureka hit me -- blueberries.

I began to jog my memory for this flavor combination and I was reminded of just one. A few summers back, I had briefly enjoyed a taste of a wildberry lavender ice cream and figured the fresh tartness of Georgia blueberries would be the best substitute for whatever berries make up the “wildberry.” I started devising a plan to put this idea into fruition.

The biggest question nagging at me was if lavender would even work in a pie. A hearty Google search and some cornered pages in Anne Quatrano’s “Summerland” yielded positive results. My confidence that this was becoming more of a possibility than a problem was rising, so I came up with a simple plan: With fresh Georgia blueberries, lemon zest and a splash of lavender extract, I would be able to create a delicious pie. I was ready to begin testing. 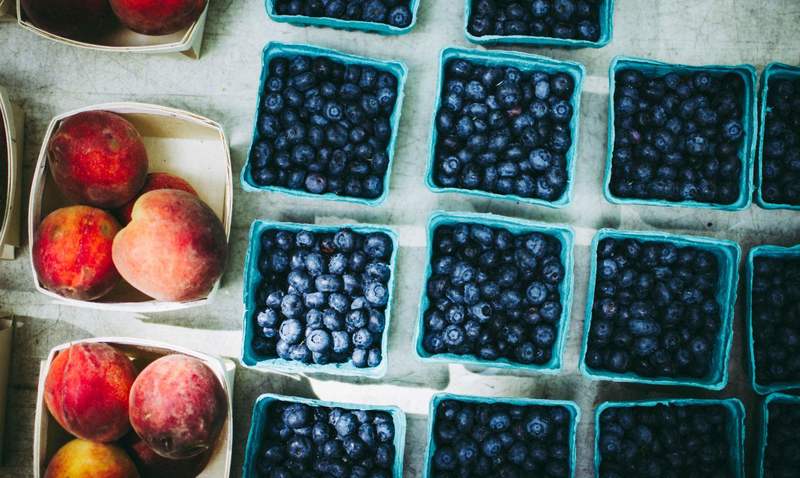 In my research, I did find an important note about pie baking -- always use a dark coated pan. Glass pie pans leave you with a soggy crust as they don’t conduct heat the same way that a metal pan does.

With the supplies purchased, the research completed and my personal recipe ledger open and ready for note-taking, I was ready to bake. To make sure I was testing every lavender-scented pie possibility, I decided to bake four mini pies (in 5-inch metal pie pans) with four different fillings. The first would be the original blueberry lavender pie, another would be a test with cinnamon, the next would be a test with peaches, and finally a test with all three.

The procedure was working. The lattices were laid, and the temperature was set to 400 degrees. After 15 agonizing minutes and one tin foil tent later, the pies came out beautifully golden, with their fillings bubbling and the softest scent of lavender wafting through the air. When an hour of cooling had passed, the ultimate test was conducted -- taste.

It turned out I was right. Lavender is a great match to sunny seasonal fruit. It was delicious in the most bare-bones of my pies, but my favorite result was the final pie, with peaches, blueberries and a hint of cinnamon.

Now is the time to jump on this pie recipe, while peaches are still at the market in their giant, juicy, free-stone glory. Let's get baking. 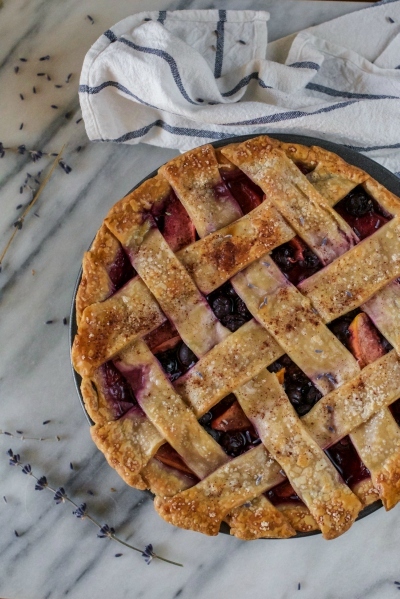 Note: If making your own pie dough is too cumbersome, you can substitute for store bought frozen pie crust. Just make sure to follow instructions for preparation, starting on step 3.

Instructions
To make the pie dough: In a medium bowl, stir together 2 1/4 cups of the flour with the sugar and salt. Add the grated butter. Use a spatula to toss the butter and to coat with the flour. Using a pastry cutter, cut the butter into the flour mixture, working quickly until pea sized pieces of butter remain -- do not overwork.

In a liquid measuring cup, stir together water, ice and vinegar. Sprinkle 2 tablespoons of the ice water mixture over the flour mixture. Continue to use the pastry cutter to cut the water into the flour mixture until it is fully incorporated. You want the dough to be sticky but not overly wet. Some of the pieces should still crumble off.

Once chilled, remove the dough round from the fridge and cover the counter with flour. Roll the dough out into a round, measuring 11 to 12 inches in diameter and 1/4 inch thick. Transfer the rolled-out dough to a 9-inch dark-coated pie plate, and press it firmly into the bottom and sides. Use kitchen shears to trim the excess dough from the side of the pie plate, leaving 1/4 inch of overhanging dough over the rim. Cover loosely with plastic wrap and freeze while rolling out the remaining dough.

Re-flour the counter and roll the second square of dough into a large rectangle 1/4 inch thick. Use a pastry wheel or sharp paring knife to cut the rectangle into seven to eight 2-inch-wide strips. Transfer the dough strips to a parchment-lined baking sheet and freeze while preparing the filling.

To make the pie: In a large bowl, combine the peaches, blueberries, sugar, cornstarch, lemon zest and juice, vanilla paste, lavender extract, and cinnamon. Toss until the fruit is evenly coated with the sugar and seasonings. Let sit for 5 minutes.

Use a spoon to transfer the pie filling into the cold pie dough base, leaving any remaining juice behind in the bowl. Make sure the filling is as flat as possible.

To make the lattice weave, place a four pie strips in a row on top of the filling, about 1 inch apart. Weave the remaining strips perpandicular to the first rows, starting from the bottom and moving upwards, placing each strip about 1 inch apart. Use kitchen shears to trim off any overhanging dough, and then use a fork to crimp the lattice weave to the pie dough base, moving all the way around the edge of the pan. Cover loosely with plastic wrap and freeze for 1 hour before baking.

Place a rack just below the center of the oven and heat the oven to 400 degrees. Line a baking sheet with aluminum foil.

In a small bowl, whisk the egg with 1 teaspoon water until very smooth. Use a pastry brush to brush the egg wash over lattice and edges of the chilled pie. Sprinkle with additional sugar. Place on the prepared baking sheet.

Bake for 20 minutes. Check the crust and cover the top of the pie with aluminum foil if the edges are browning quickly. Lower the oven temperature to 350 degrees and continue to bake until the crust is golden brown and the filling is bubbling, about 15 minutes. Let the pie cool completely on a cooling rack before serving. 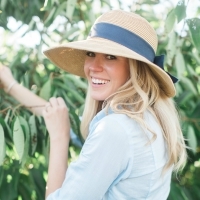 A Californian by birth, and a Yankee by heritage, Cynthia has adopted the South and its traditions for the majority of her life while living in Atlanta, Georgia. Fascinated by the rich and complex culture of the South, she started documenting the modern Southern experience through her blog Darling Down South in 2014. Darling Down South is an experience for readers on how to live the fascinating Southern lifestyle. From hosting your own dinner party in style, to travel guides of great Southern cities, Cynthia curates an experience for all Southern enthusiasts to relate to and engage with. The blog is more than just entertainment material, it is a destination for rich Southern experiences, appreciating a life well situated in Southern splendor and how Southern culture can be applied in every facet of life wherever you are geographically located.