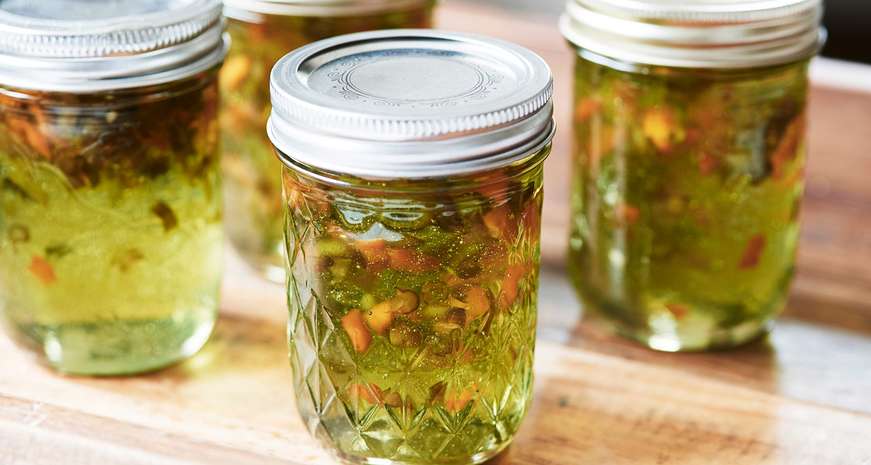 Make pepper jelly and be as Southern as you can be

In this edition of Anne Byrn's column, the bestselling author talks proper Southern pepper jelly. Below, she shares a recipe and guides us through the process of making this traditional Southern spread whether or not your garden peppers have ripened.

The March green of my backyard makes me think vivid green in the kitchen — specifically, pepper jelly. It's the last-minute salvation of Southern parties, and we all know the ritual. Open a jar, pour over cream cheese, and find crackers fast because guests are at the front door! 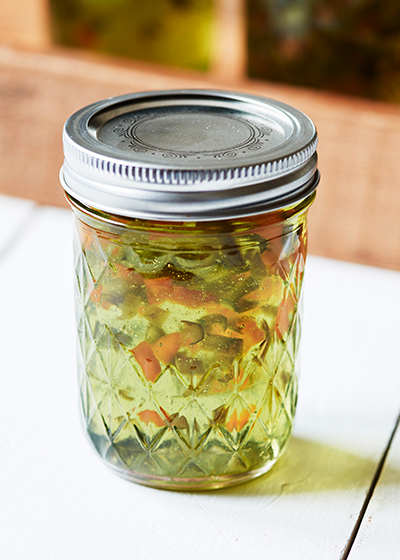 This last-minute appetizer would not have endured the generations had the flavors not been pitch-perfect. It is sweet, hot, and tangy. And better yet, we Southerners can make our own pepper jelly from home-grown peppers, then pour it over soft goat cheese, surrounded with salty crackers.

What makes pepper jelly so delicious and perfect for springtime entertaining is that it's a beautiful pantry stable that pleases just about everyone. Plus, we can make it now. We could wait until summer when our garden peppers are harvested. But why? Seize the moment and buy a combination of hot and sweet peppers. We can pull sugar and vinegar from the cupboard, and add something called "pectin" to help the jelly set.

In scientific terms, pectin is a complex carbohydrate found in underripe fruit. It is essential to helping jams and jellies thicken. When you make peach jam from a mixture of ripe and underripe peaches, those less than ripe peaches are naturally high in pectin. But when making jelly from something like a pepper, a vegetable that does not contain its own natural pectin, you've got to use the commercial kind, which is found on supermarket aisles, usually made from apple or citrus, fruits high in the gelatinous starch.

So let's go on and jump the gun, now. With peppers, sugar, vinegar, pectin, a cooking pot and jars, let's make pepper jelly.

Why Pepper Jelly?
The late great North Carolina food writer Bill Neal observed that Southerners can make jelly out of anything. So true.

Preserving was and still is an important way of extending the season in the South, and it's a way to savor the bounty of the harvest months later. A dab of pepper jelly might remind us of spring and summer, and also might add color and flavor to field peas and cornbread, a grilled cheese sandwich, burgers, fried chicken, and even scrambled eggs.

A dab of pepper jelly adds excitement, too. It's made with a mix of sweet bell peppers and hot peppers, but because no two peppers are created equally on the heat index, pepper jelly can vary in sweetness and heat. It's up to the jelly-maker to create a condiment that is smoking-hot, nearly hot, sort-of-hot, or not-so-hot, depending on how many hot peppers are added to the pot. Thankfully the sugar tames the heat, and in the end you have the Southern equivalent of Asian sweet-hot sauces or Mexican pineapple salsas. 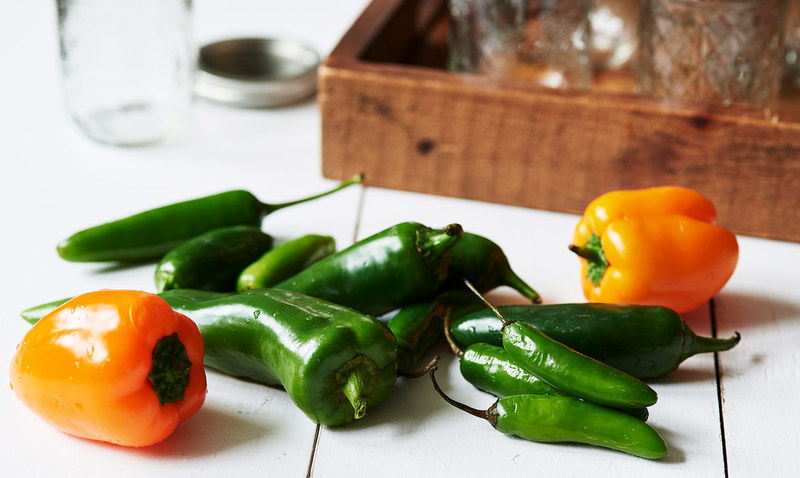 Bill Meador of Nashville has been making his own pepper jelly as long as he has been growing peppers. Bill got into making jelly when he had a plum tree in his yard and needed to find a way to use all the really tart plums it produced. "But when the plum tree died," he said, "I had to figure out something else to make jelly out of. So I started growing my own hot peppers."

Bill's mother didn't can fruits and vegetables. This was just a hobby he learned, to use up the bounty of his garden — especially the Serrano peppers that proliferate in the summer heat. Bill likes the flavor of Serrano or jalapeno in pepper jelly, but he is not a fan of cayenne. And how much hot pepper to add to the pot comes down to his "eagle eye," not a recipe. "I guess I err on the side of not making it hot enough because I give it away to people who don't like really spicy food."

Making Pepper Jelly
The recipe I use is a blend of a few different methods. I made jams, jellies, and all sorts of canned foods when I lived in Atlanta years ago. I took the master preservation class, a complete and utter immersion into canning, from the Dekalb Extension Service. After that extensive course, I felt confident to can just about anything my garden grew.

But canning is like other hobbies — you need to keep up with them to be proficient. Raising small children didn't provide time or kitchen counter space for much canning back then, but now that those kids are grown, I'm dusting off my canning tools and reentering the preservation world. And I find I bring a life's worth of cooking experience back to preserving foods. 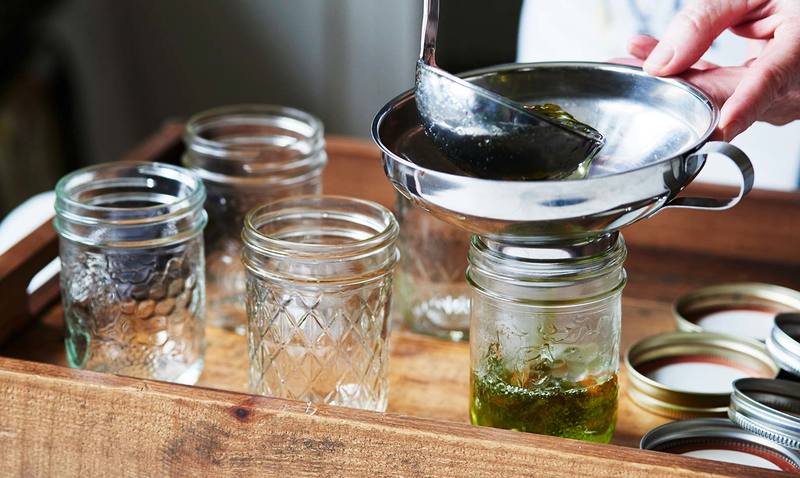 As a curious baker, it's hard for me to take someone else's word on even a jelly recipe, for example. I like to adjust the sugar to be sweet enough, but not overpowering. The heat should be dialed up, and I admit to being a little unapologetic about this. Just my opinion: bland pepper jelly is for sissies. I like things hot.

So, unlike Bill Meador, my pepper jelly goes to friends who also like food hot. That's why the recipe I include has a range of peppers to use. And while you may think that keeping the seeds and veins in the mix will make the jelly even hotter, they aren't very pretty to look at. I make sure to remove.

I agree with Bill that Serrano or jalapeno are best for heat, and I will go against the grain and add an yellow or orange bell pepper instead of green if that's what is in my fridge (no more do I dash to the grocery store to get the exact ingredients called for in a recipe). But I have learned from experience that not just any vinegar will do. It needs to be white vinegar, or your jelly will look murky from cider vinegar, or be oddly flavored from sherry or tarragon. Use white granulated sugar; save the precious organic sugar and brown sugar for making peach or apricot jam this summer.

And here are a few other must-dos to remember:

Use real canning jars and lids. Run them through the dishwasher to sterilize, or boil 15 minutes in a pot full of water. Always make jelly in small batches. To fill the jars, ladle the hot pepper mixture into jars, leaving 1/4-inch headspace at the top of the jar. 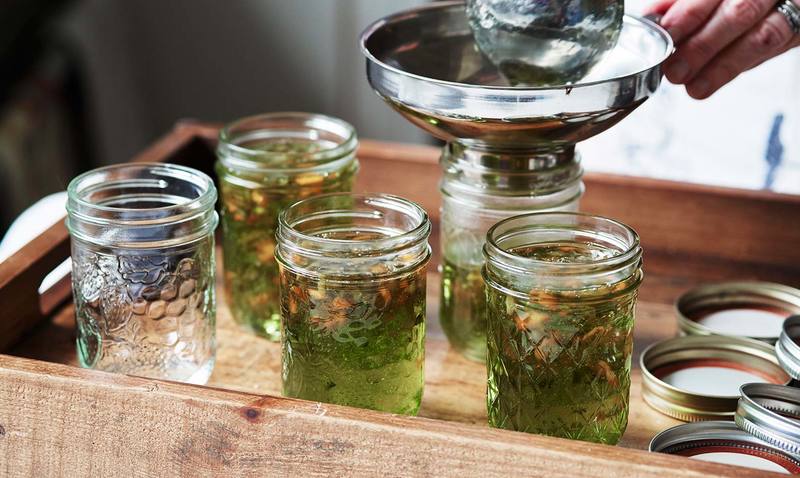 Another way of making this recipe is to puree the bell peppers and half of the vinegar in a blender or food processor first. Then add these pureed peppers, the rest of the vinegar and the sugar to the pot, and boil for 10 minutes before adding the rest of the peppers and the liquid pectin. It makes a pureed, smoother, pepper jelly without little bits of pepper suspended in the jars. But you may like the little bits of pepper. I do!

And if the jelly simmered on your stove isn't green enough? Stir in a few drops green food coloring before ladling into jars, or forgo the coloring and go "au naturel," which really is best.

Enjoy the sweet heat and the ritual of serving your own pepper jelly!

Instructions
Sterilize five half-pint canning jars, lids, and rings by running them through the dishwasher or simmering in boiling water for 10 minutes. Let air dry.

In a large pot, combine the sugar and vinegar. Bring to a boil over medium-high heat. Continue to boil vigorously for 5 minutes. Add the sweet and hot peppers and continue to boil, stirring constantly, for 1 minute. Stir in the pectin and boil for 1 minute more.

Pour the hot jelly into the jars, leaving about 1/4-inch headspace. Clean the jar rims with a clean, wet dish towel. Place the lids on the jar. Press down on the lid while you place the ring on the jar and twist until nearly tight. You should hear the jars "ping," which means they have sealed. Twist the rings until they are tight. Turn the jars upside down to seal for 20 seconds. Then, turn upright to cool at room temperature. Use at once, or store in the refrigerator until ready to use or give to friends.