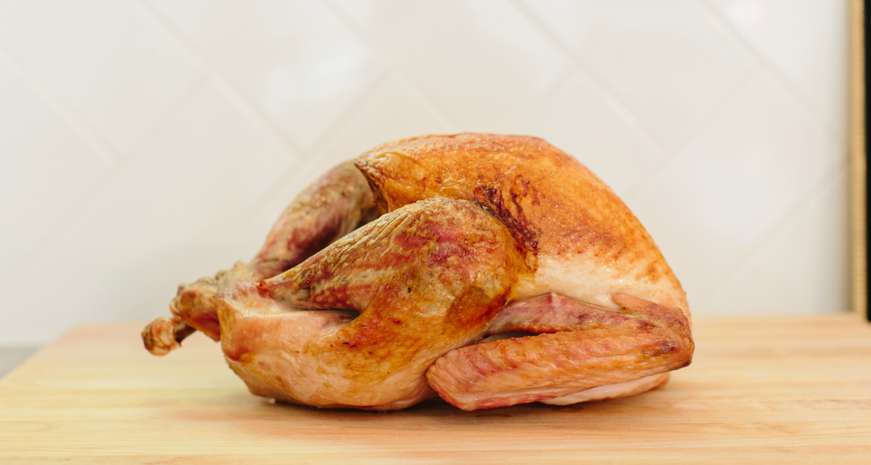 I'm not sure how Thanksgiving dinner goes at your home, but at my house, we spend a lot of the meal talking about the food we're eating — and what we're gonna eat next. In and among the descriptions of how we've made the pumpkin pie even better this year or how stuffing is not the same thing as dressing, we always come back to talking about turkey. It is, after all, the centerpiece of the meal (no matter how much more we love the sides), so it's kind of inevitable.

This year, I'm going to encourage you to do the same. Talk turkey, but instead of helping to spread myths about America's favorite poultry (at least come late November), let's disseminate turkey truths. There's enough nonsense out there in the world right now, so help your family and friends get these five facts straight.

Eating turkey makes you tired
While you may have heard this myth busted before, it still gets repeated over and over again this time of year. The fact remains: tryptophan, an amino acid that is found in turkey (in addition to all poultry and most protein-based foods), isn't what makes you tired on Thanksgiving. The massive amount of food consumed at once, coupled with alcohol consumption is the recipe for a post-dinner nap.

You have to brine your turkey in order for it to stay juicy and flavorful
While brines will certainly add additional moisture to your turkey, they won't necessarily make your turkey more flavorful. The only components of a traditional brine that make it more than skin deep into the bird are salt and water, so forget about that cider and sage and whatnot. (Those flavor molecules end up getting left behind.) More water isn't really a good thing when it comes to mild turkey, so we prefer to dry brine the bird — you'll get salt deep into the bird for flavor, but won't have to worry about flavor-diluting water as well. The only reason you'd want that extra water in there is in case you plan to overcook your turkey, which you're not going to do, right? Use a thermometer (a real thermometer) and pull the turkey out of the oven when the breasts register 150 degrees and the legs are at least 165.

Pop-up turkey thermometers are just as good as meat thermometers
Don't ever trust those little buggers. They're designed to pop up once the turkey reaches around 180 or 185 degrees, which is disastrously overcooked. If your turkey comes with one, throw it out and invest in a digital instant read thermometer. Digital thermometers don't have to be expensive, they'll tell you when your meat is cooked but still juicy, and you can use them again next year — or the next time you roast a chicken.

Basting makes your turkey moist
While basting your turkey can make it cook (slightly) faster and (often) increases browning, it won't do much to boost moisture. Basting will help distribute those little bits of rendered fat over the top of the bird, so it will add flavor the skin, but at the same time, that moisture makes it near-on impossible to have crisp skin. Beyond that, it's not going to seriously hurt your turkey, but why take that extra step? We skip it. Crisp skin forever.

You've got to cook a whole bird for Thanksgiving or it isn't Thanksgiving
OK, we get it. There's some glamour and showmanship that comes along with pulling out a whole bronzed turkey and carving it table-side. But cooking a whole turkey on a rack in a roasting pan is actually a terrible way to get perfectly cooked meat. This method insulates the parts of the bird that need extra cooking (the legs) and elevates the parts that need the least (the breast), so by the time the legs are cooked, the white meat is often hopelessly dry. A better solution is to butterfly the turkey (more on that later this week) or to simply scrap the whole bird and roast the part that most guests want to eat anyway — the breast. You can purchase whole, bone in turkey breasts easily this time of year and they cook far faster than a whole bird. Pick up two if you're feeding a crowd.

Here's how to safely fry a turkey

Be this happy on Thanksgiving by using our timeline

Here's how to safely fry a turkey

Be this happy on Thanksgiving by using our timeline