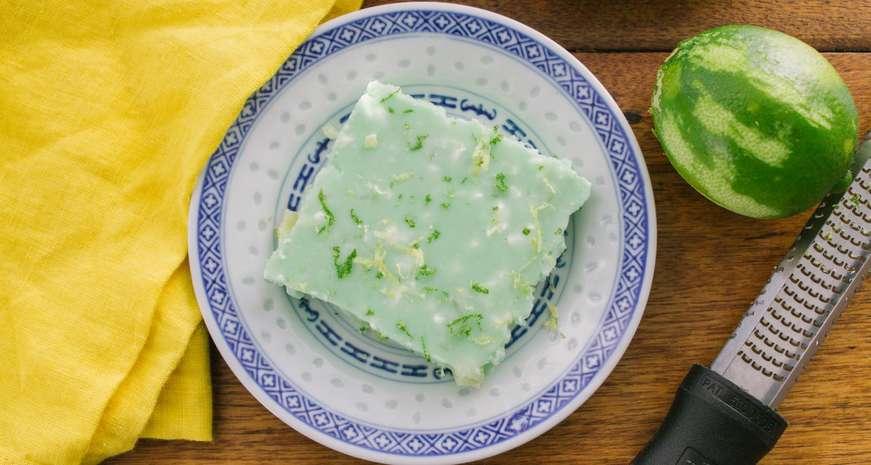 Let's face it: Congealed salads are not sexy. Molded and colorful, and full of canned and packaged ingredients, these not-really-a-salad salads are decidedly retro, and not in a sleek, West Elm mid-century modern kind of way. Even the word "congealed" is kind of ugly, and it's certainly not an adjective I think of when I'm thinking of, well, food.

But back in the 1950s, when Jell-O was peaking in popularity, congealed salads, variously known as jellied salads, molded salads and aspic, were the thing in entertaining. Towering layered dishes studded with all manner of fruits, vegetables and even meats, these dishes were a shining beacon of what American engineering could do.

Of course, gelatin-based dishes were nothing new. One of the most popular cookbooks in the pre-Revolutionary War colonies and later, in early America, was Hannah Glasse's The Art of Cookery Main Plain and Easy, which featured multiple recipes for "jelly" made from stewed calves' feet, and contained the first known mention of elaborate trifles made using such jellies. These jellies were elaborate and time-consuming to make, and they required access to ice, so dishes using gelatin were entirely the provenance of the wealthy — those who enslaved, and later, employed, cooks. Gelatin dishes continued to increase in popularity throughout the Victorian era, especially after the invention of powdered gelatin in 1845 and flavored Jell-O in 1897. 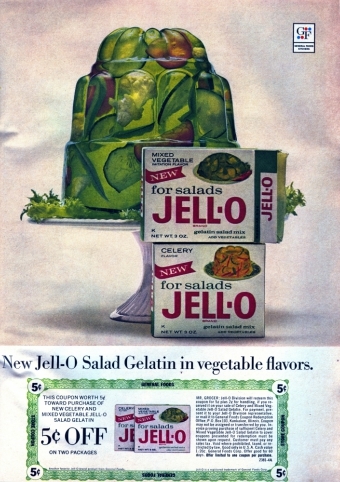 However, it wasn't until the invention of home refrigerators that Jell-O, and congealed salads, really began to take off, reaching the parts of the poorer, rural South that previously couldn't have afforded those elaborate dishes. Writing in the Southern Foodways Alliance publication "Gravy," Lora Smith explained: "After World War II, something happened in the kitchen. In many of the stories, Jell-O marked and divided a shift in home cooking. I came to think of time in Before Jell-O and After Jell-O eras. It seemed strange that Jell-O emerged suddenly as the first commercially processed food embraced by the women of rural Appalachia, especially since gelatin dishes had been popular in the United States—even in Appalachian cities—since the early 1900s. ... Refrigeration changed everything about household and farm labor. ... Among those advances, Jell-O was special. Many of the women mentioned a 'fancy Jell-O salad,' reserved for holidays like Christmas, as a modern dish that became a family traditions."

Jell-O salads became so popular in post-War America that the company began to manufacture savory flavors of the powder, such as celery, "Italian," mixed vegetable and tomato. These suited the vast numbers of recipes for congealed salads; in the 1950 edition of Charleston Receipts, over half of the salad recipes, from fruit salad to cheese aspic, called for some kind of gelatin product. However, despite the relative ease of Jell-O, these salads began to wane in popularity by the late 1960s as more and more women joined and stayed in the workforce. Elaborate Jell-O salads became special occasion and holiday dishes, much as they still are today.

Growing up, my exposure to Jell-O salads was limited. Unlike many other Southerners, my immediate family and grandparents didn't much care for the stuff, so I only saw them at larger family reunions. The most common was a dish we called "green squares," which is a molded, sliceable variation of lime-flavored "emerald salad." Filled with pineapple, cottage cheese and mayonnaise, the salad is one of those curious amalgamations of pantry ingredients that sounds (to me) quite absurd, but manages to still taste good. 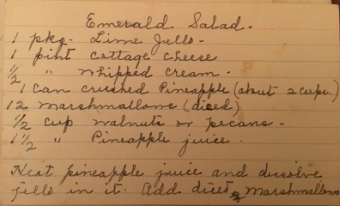 The oldest recipe for emerald salad I could find was stuffed inside a journal from the early- to mid-20th century. This version is thickened with both lime jello and melted marshmallows, and then lightened up with whipped cream, making it more of a neon marshmallow fluff than a molded salad. However, the sliceable version with which I was familiar is still fairly popular around the internet; a quick Google search revealed hundreds of similar recipes.

So instead of trying to recreate one particular recipe, I decided to pick and choose from a few different versions to create what I think is the best congealed salad you can make. In addition to the requisite mayonnaise and cottage cheese, I stirred in a cup of sweetened condensed milk for creamy texture. Upping the citrus flavor with fresh lime and lemon juice helps to balance the sweetness of the Jell-O and condensed milk, and blooming the Jell-O in pineapple juice also adds needed acidity. An extra packet of unflavored gelatin ensures that the whole, fat-filled salad sets up with ease. And a final sprinkle of citrus zest gives the whole thing a bit more pizzazz.

It may not be trendy, but this congealed salad certainly deserves a place at your holiday table. 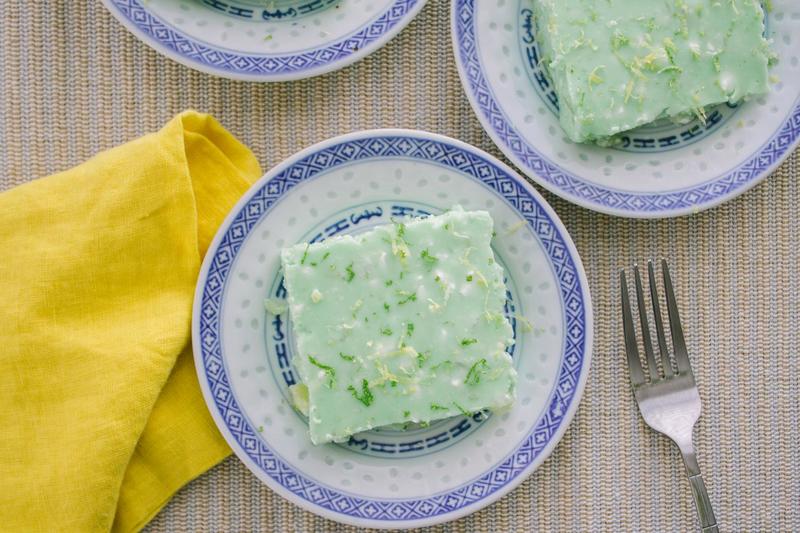 Instructions
Lightly spray a 9- by 13-inch baking dish or other mold with nonstick oil spray.

In a large bowl, whisk together the Jell-O and the unflavored gelatin.

Strain the crushed pineapple through a fine-mesh strainer set over a 2-cup liquid measuring cup. Measure out 1 cup of the pineapple and reserve. (Save the remaining pineapple for another use.) Add the lemon and lime juice to the measuring cup with the pineapple juice. Add enough water to bring the liquid level to 2 cups. Transfer to a small saucepan.

Bring the juice mixture to a boil over medium-high heat. Pour the boiling mixture into the bowl with the Jell-O and whisk to dissolve. Let sit until lukewarm, 15 to 20 minutes.

Stir in the cottage cheese, condensed milk, mayonnaise and reserved pineapple into the cooled Jell-O mixture until the milk and mayonnaise are thoroughly incorporated. Transfer to the prepared baking dish. Refrigerate until fully set, at least 1 hour.

When ready to serve, sprinkle both zests across the top of the salad. Slice the salad into squares and serve. (Alternatively, before zesting, dip the bottom of the baking dish into a pan of hot water to loosen. Flip the salad out onto a large serving platter and sprinkle with zest.)

'Tis the week for healthy eating

'Tis the week for healthy eating