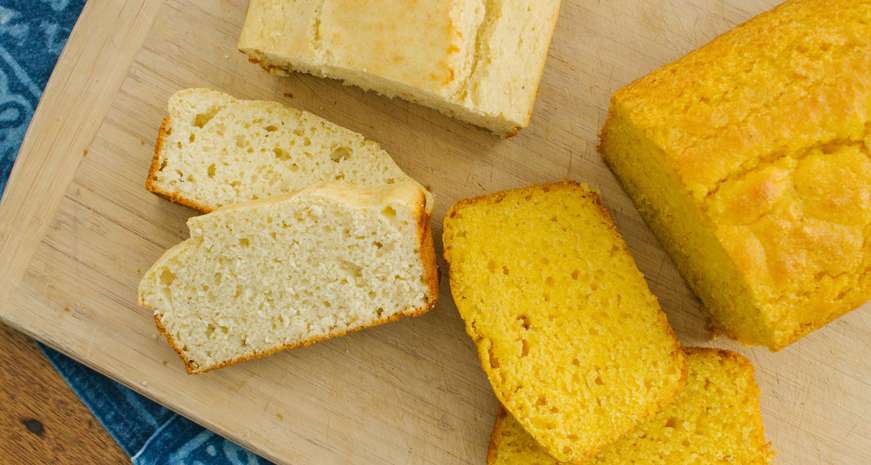 I was always taught that the way in which we make our cornbread down here in the South was as much of a defining characteristic as saying the word "y'all" or eating chicken biscuits for breakfast. Cornmeal, bacon grease, buttermilk, baking soda and powder, eggs — these ingredients are sacrosanct, and anyone who steps near a tub of flour or sugar is, bless your heart, not from here. (Never mind the fact that ever-popular White Lily cornbread mix contains wheat.)

But listen closely, and I'll let you in on an open secret: There's a traditional form of cornbread from deeply Southern middle Tennessee that calls for both — corn light bread.

I'm guessing that many of you reading this will say, "Of course! Corn light bread! What kind of Southerner are you that you have never heard of such a bread?" And yes, I'll admit that I had never heard of the name before, but I have certainly eaten it.

Baked in a loaf pan and often just as sweet as any cornbread coming from above the Mason-Dixon, corn light bread is a hybrid form of our beloved side dish that you'll generally only see in and around Nashville. Its curious name doesn't come, as you'd expect, from a "lightening" of ingredients; it isn't lower in fat, sugar or carbohydrates than any other cornbread. Instead, the name hints at the history of breads in the South.

When wheat flour was far more expensive than corn, the baked good most Southerners referred to as "bread" was actually cornbread. Breads made with wheat flour and yeast were called "light bread" to describe their relatively lighter texture compared to the dense crumbly nature of Southern cornbread. 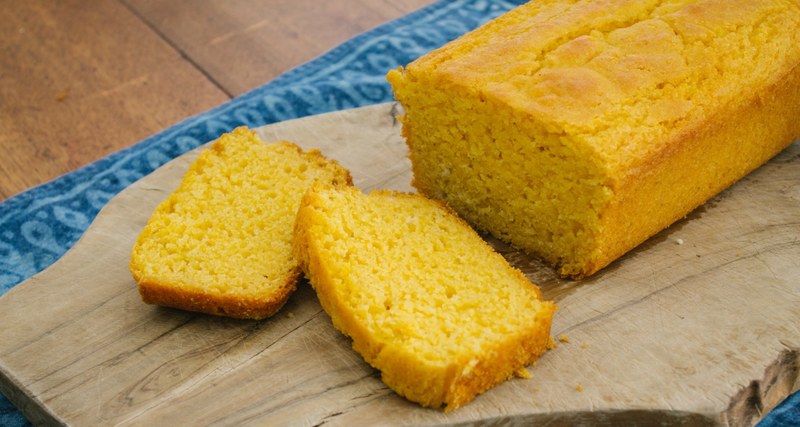 Corn light bread combined the two for an airy texture and sliceable crumb. Early versions of corn light bread actually contained yeast, and you can still find such recipes today. These curiously use both dry yeast and commercial leaveners, such as baking powder and baking soda, and usually contain less sugar than what you'd find in most restaurants and barbecue joints today.

I managed to track down a savory, yeasted recipe for the bread on the blog of journalist and forestry writer Claude Crowley, who wrote: "You can Google many recipes for corn light bread, but beware. They vary wildly, and many appear to me to have little kinship to the original.  Some call for odd ingredients, like rye flour, honey or molasses, and chopped chili peppers. Chopped chili peppers in corn lightbread? Good Lord! ... Most corn lightbread recipes call for sugar, generally too much, in my opinion. Sugar in regular cornbread was against my family’s religion; to me, that belief carries over to corn lightbread. ... Still, tastes differ. So consider sugar an option, if you like. But if you do add it, use discretion. You aren’t making a cake."

Crowley's recipe, lightly adapted below, is fairly light, with a spongy crumb and a subtle sweetness from the corn. And with its fat coming from only a couple eggs and a cup of milk, it is actually fairly "light" from a health perspective. Of course, I found the bread far more delicious once sliced, toasted and slathered with butter, but to each her own. 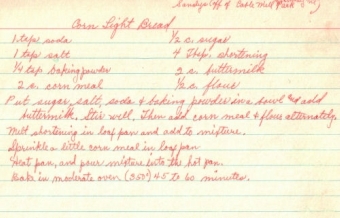 A far more typical recipe, at least today, is for sweet corn light bread. These varieties call for all kinds of sweeteners, from granulated sugar to sorghum, and they range in proportion of sweetness, from a more demure bread appropriate for dinner, to loaves more akin, as Crowley wrote, to cake.

And, yes, recipes abound. I've adapted my sweet corn light bread, also below, from an undated recipe card I found on the excellent vintage recipe site Recipe Curio. (Southern Kitchen also has two other recipes for sweet corn light bread in our recipe collection, which you can find here and here.)

With 1/2 cup of sugar for 2 1/2 cups of dry ingredients, this corn light bread isn't too-too sweet. Further, some of this sugar gets balanced out from the tang of the buttermilk, resulting in a bread that will pair perfectly with a bowl of chili or a half-rack of ribs. (I did, indeed, eat it with a bowl of chili.)

As I was pouring hot shortening into the batter for this dead-simple quick bread, I realized I had smelled this aroma before — it is the scent of a thick square of meat-and-three cornbread and a roadside barbecue corn muffin. I've been eating corn light bread for years; I've just been calling it something different. 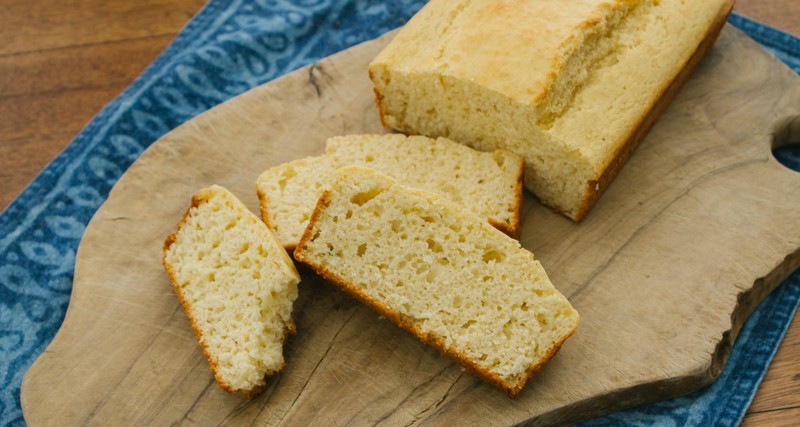 Instructions
Heat the oven to 425 degrees. Grease a 9- by 5-inch loaf pan with nonstick oil spray. Line the pan with parchment paper.

In a small measuring cup, stir together the water, yeast and sugar.

Pour the milk mixture into the flour mixture and stir until well-blended. Transfer to the prepared loaf pan and bake until golden brown and a toothpick inserted into the center comes out clean, 20 to 25 minutes. Let cool in the pan for about 5 minutes, and then carefully transfer to a wire rack to cool completely. Serve.

Instructions
Heat the oven to 350 degrees. Place the shortening in a loaf pan, and place the pan in the preheating oven to allow the shortening to melt and the pan to heat.

In a large bowl, whisk together the cornmeal, flour, sugar, salt, baking soda and baking powder. Stir in the buttermilk until well-combined. Pour the melted shortening into the batter and stir to combine.

Sprinkle a little cornmeal across the bottom and sides of the hot loaf pan. Pour the batter into the prepared pan and bake until golden brown and a toothpick inserted into the center comes out clean, 45 to 60 minutes. Let cool in the pan for about 5 minutes, and then carefully transfer to a wire rack to cool completely. Serve.