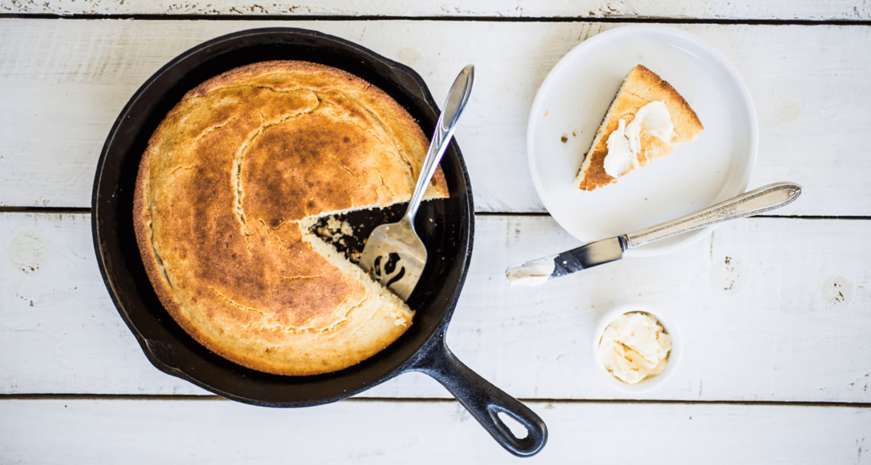 If you want to be a true Southern chef, master these 10 dishes

10 foods every Southern chef should master

The South is a vast place. Those who grew up in Appalachia, for example, probably didn’t have a regular diet of gumbo, while those in New Orleans might have favored pralines over chess pie. In an attempt to celebrate our Southern diversity and put together a democratic collection of edible essentials, we polled a few experts throughout the region to hear their favorites.

Through these dishes we can learn about other pockets of the South while also reconnecting with our roots, and while some require a little practice to catch the “feel,” they’ll give any kitchen repertoire a good dose of Southern soul. And because we know that everyone that has taste buds also has their own version of a top 10, we'll continue to highlight extra recipes you may not see in this list. After all, when it comes to Southern cuisine there's always room for seconds, thirds and so-on. 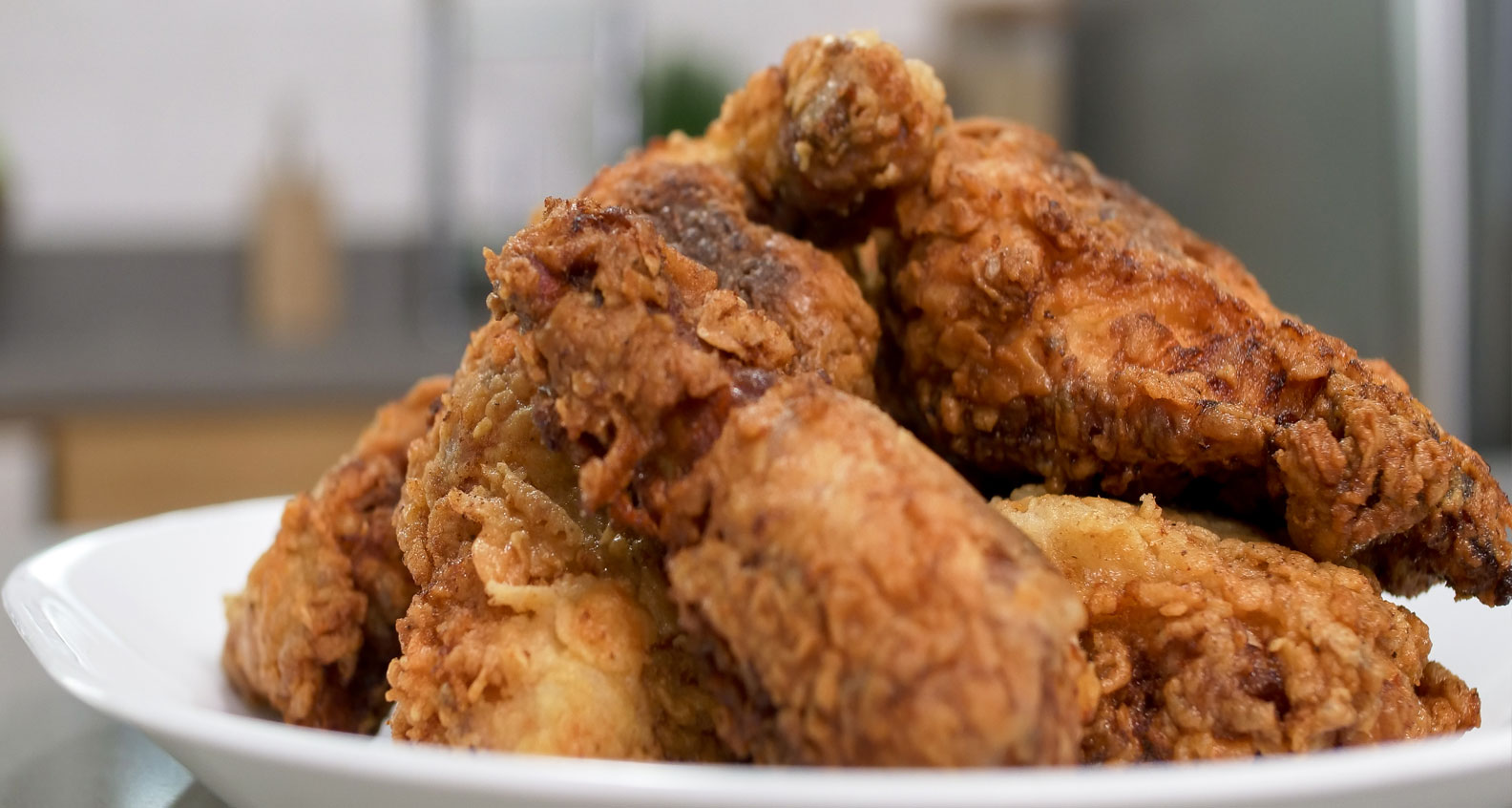 It’s first on the list for a reason. Fried chicken is like the Southern food version of a Beatles song — we all have our own favorites. But from Nashville hot chicken joints to the white tablecloths of Charleston, it’s a dish that looks and sounds different depending on preference. It can also be intimidating for first-time fryers dealing with all the ways to brine and bread, not to mention hot oil. As Kahlil Arnold puts it from his James Beard award-winning meat-and-three Arnold’s Country Kitchen, we can choose a more involved method or just go for it like many of our grandmothers, with simply seasoned flour and hardly more. To Southerners it’s a dish that’s like riding a bike. Once you find your balance and the feel of making it your own, it’s a skill you’ll never forget. 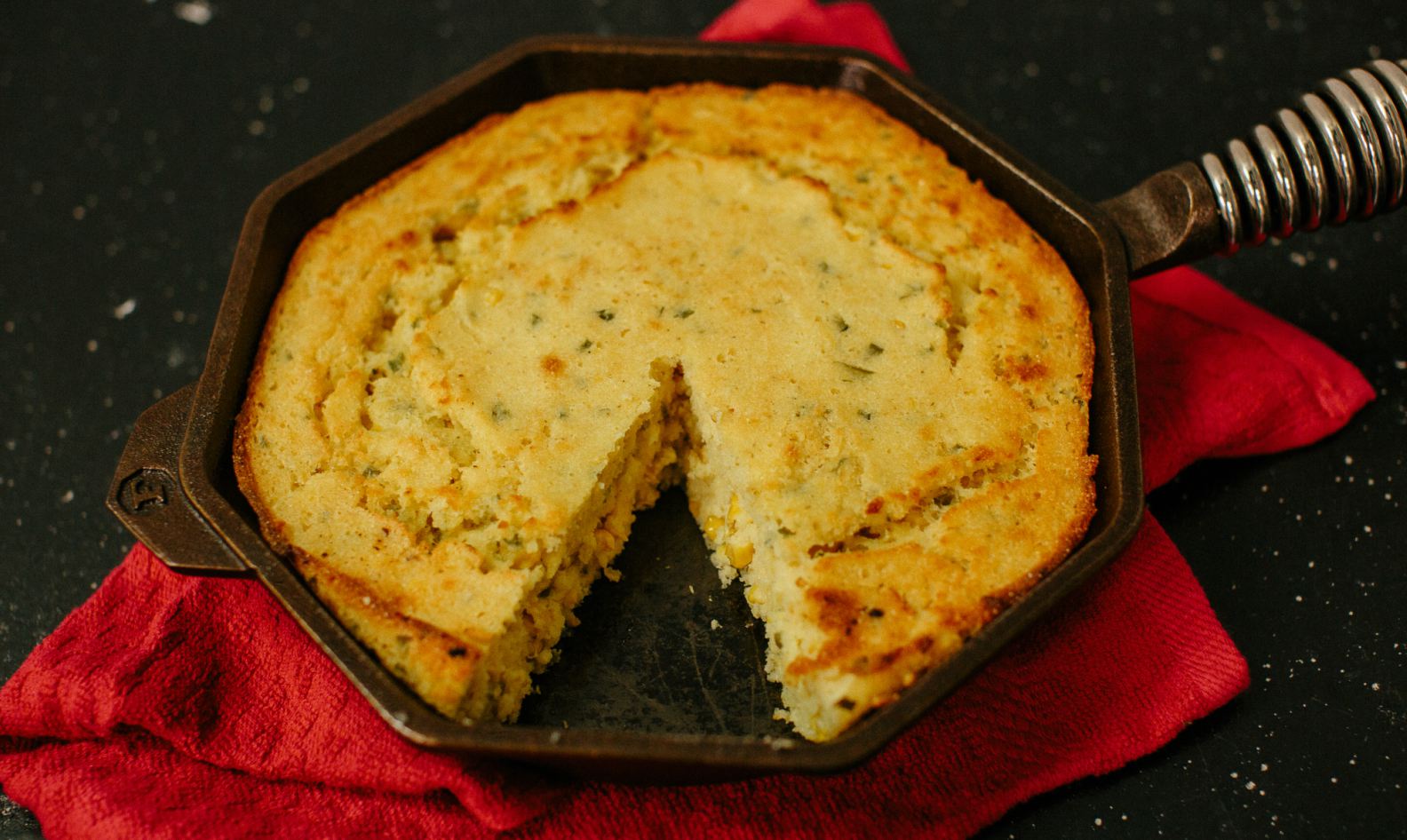 This is an easy bread to take for granted as a Southerner. Many of us grew up with or around adults who’d crank out pones of cornbread without recipes or measuring cups, using little more than cornmeal, buttermilk and a hot skillet. With its crusty edge and moist center, it’s a common scoop substitute whose use includes stews, white beans and greens. Yet sometimes it’s our elders’ memory-committed recipes that become endangered if we forget to properly record them. But learning to make this bread, whether it’s filling the dinner table on a quick whim or included early in a well-planned meal, is a worthy undertaking both for its soul-comforting taste and the rewarding experience of passing it on, whether by the plateful at the table or in cooking instructions to future generations.

Get started now with this 30-minute recipe to make your own corn muffins. 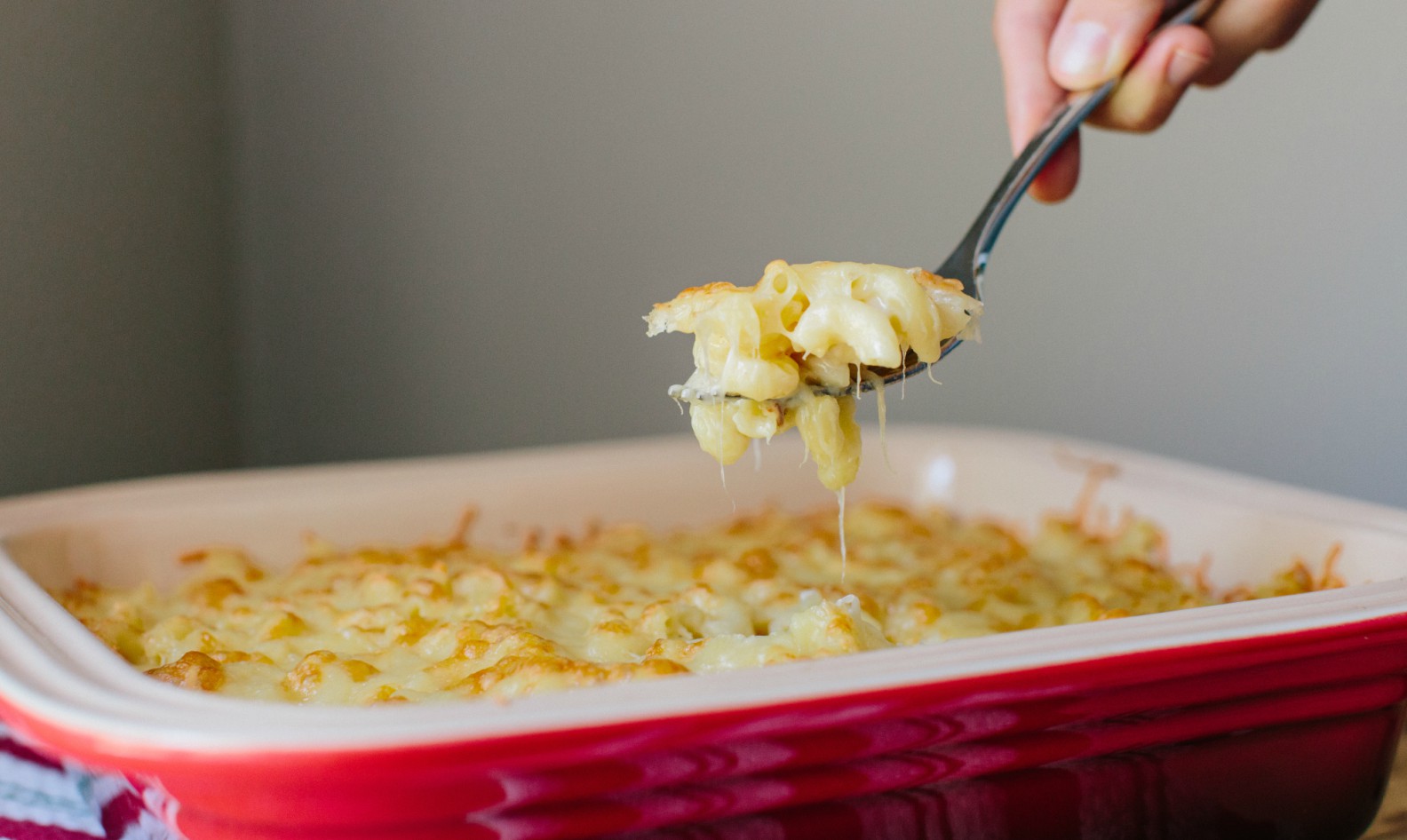 Though it’s not uniquely Southern, mac and cheese has a place on every meat-and-three steam table and in many a family’s Thanksgiving potluck in the South. It’s a quick and comforting dish for kids (of all ages). It also serves as rich canvas for showcasing additional flavor elements of Southern regions when extras such as crawfish, bacon or ham are added. Even in Charleston, South Carolina, with its special collection of coastal foods, Cru Cafe owner John Zucker named it as one of his essential dishes to master. “Has anyone ever had a Southern meal at their grandmother's house that didn't incorporate macaroni and cheese?” he asked. “It's a perfect Southern side dish and so delicious. I love that you can throw in most any cheese and it will be delicious.”

Here's a classic extra cheesy Mac and Cheese, because you can never have enough cheese, right? 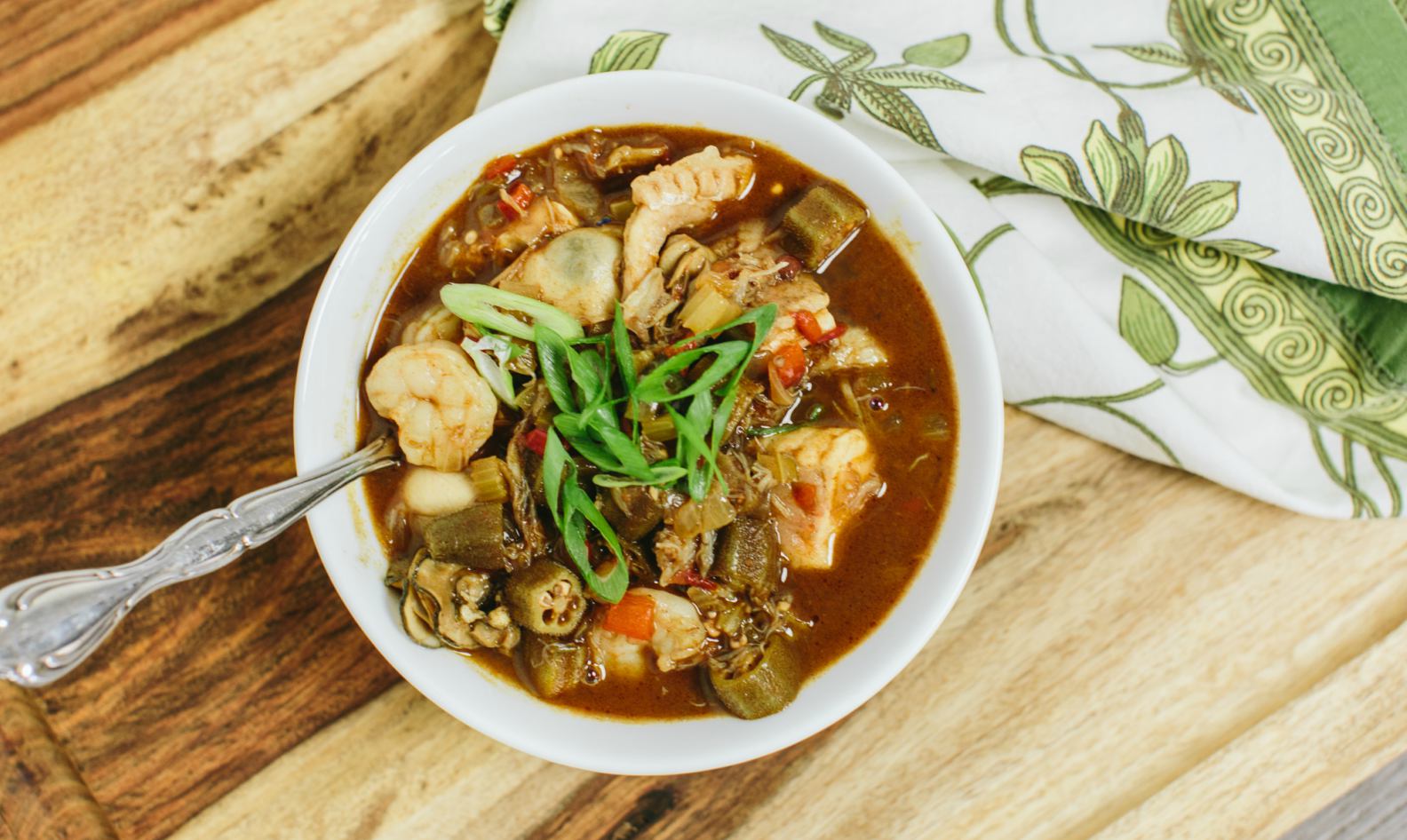 For those of us living outside Louisiana, it helps to know that there’s more than one way to make gumbo. Author Sara Roahen breaks down the vast world of gumbo types in the opening chapter of her book “Gumbo Tales,” from swampy seafood versions to those seasoned with pork sausage or thickened with okra or file. “Gumbo is a quintessential New Orleans dish that is engrained in the history of the city,” says Alex Harrell, chef-owner of Angeline restaurant in New Orleans’ French Quarter. And in finding your favorite, you might need to do research in the homes of others, even if it’s through the cookbooks or recipes they’ve written. For the best gumbos, you go to someone's house and experience their individual approach.” Through this world-famous thickened soup, whose contents largely depend on how you grew up eating it, we learn more about the city it celebrates — its interesting stew of people and influence from various cultures.

Here's one of our many versions, a classic seafood gumbo. 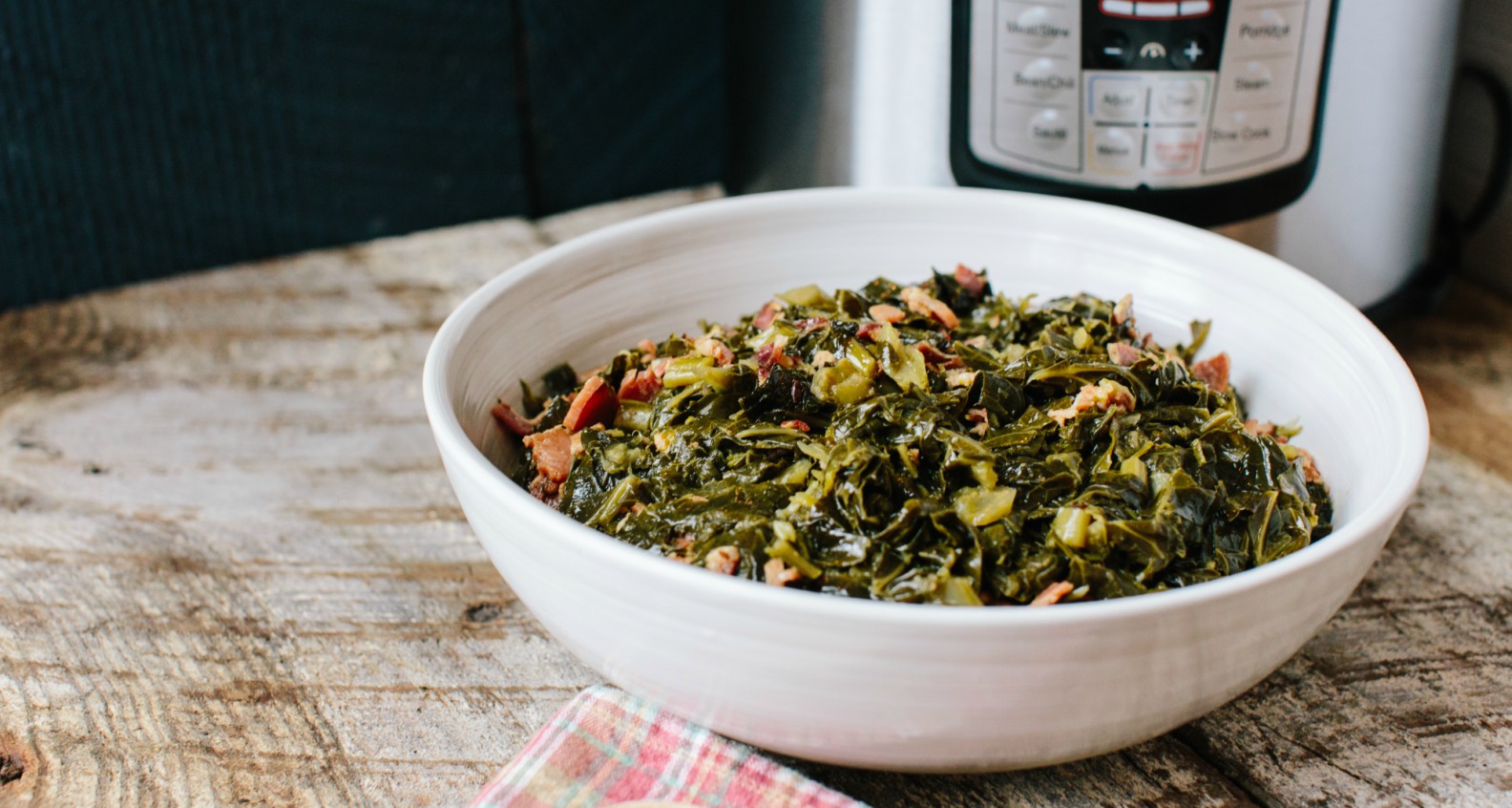 Yes, that’s a broad term. But while some prefer the softer turnip green to the sturdy collard or the bitter bite of mustard green, Southerners love to put on a mess of them — often seasoned with pork — and sop up the potlikker too. When talking salad greens, Ronni Lundy, author of “Victuals: An Appalachian Journey, with Recipes”, gives instructions on Killed Lettuce, which is deliciously tossed with green onions and hot bacon fat drippings. “Killed Lettuce was the dish overwhelmingly cited as their favorite by the musicians I interviewed for ‘Shuck Beans’ over 25 years ago,” she says, referring to her classic cookbook “Shuck Beans, Stack Cakes, and Honest Fried Chicken.” “It's the perfect tonic to break the winter blahs, and a whole delicious meal with just a skillet of cornbread.” Speaking of tonics, we've got a recipe for bourbon collard greens — you might wanna try that tonight.

Have you tried making collard greens in an Instant Pot? If not, here’s how to do it correctly. 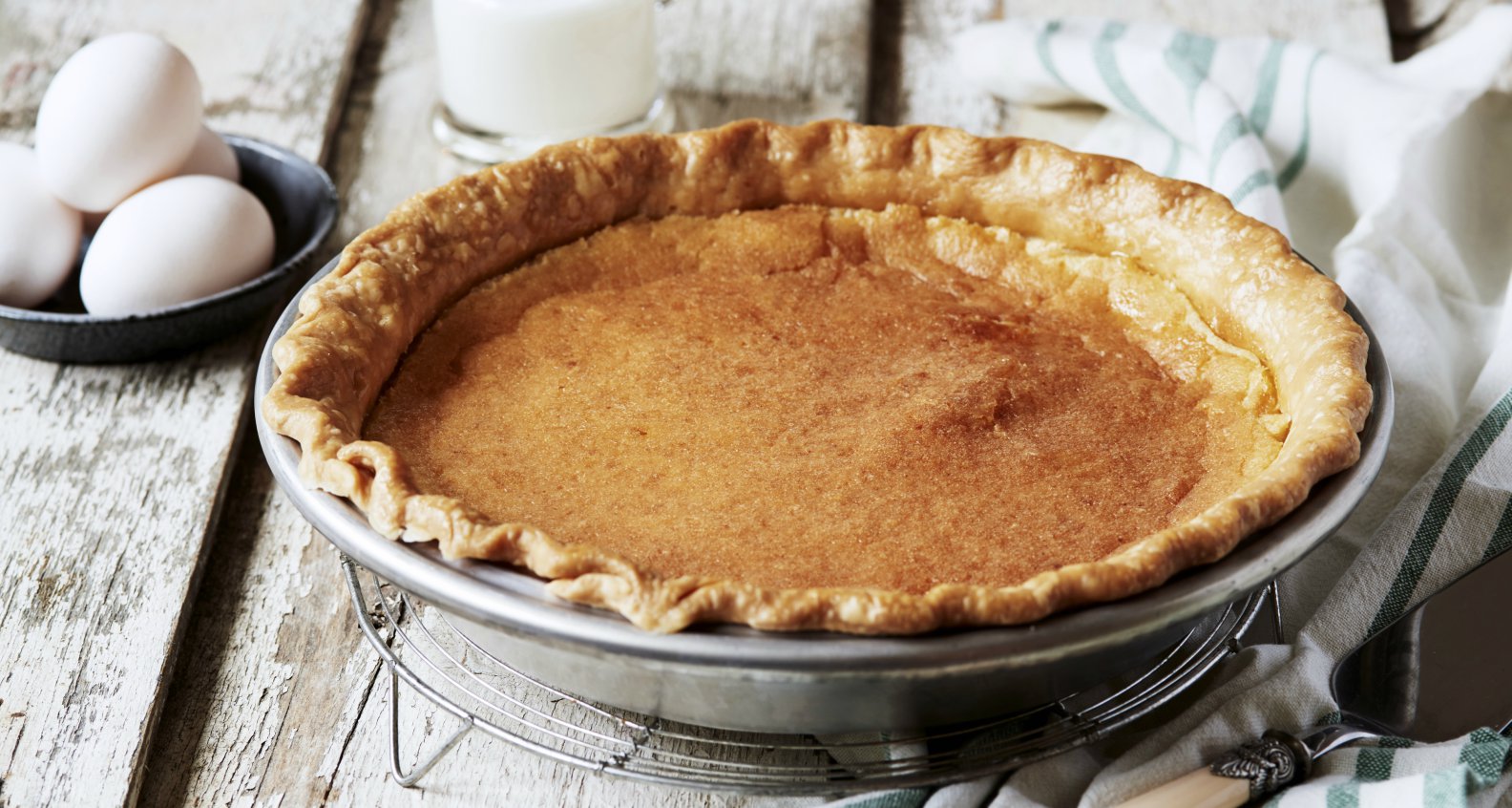 Lundy also recommends gathering the know-how for a simple custard pie known as “cupboard” or “pantry” pie, meaning “a pie that you make from whatever you have on hand without running to the store.” She says the eggs and butter add to the pie’s expense, making it more of a party food. “In the mountains, vinegar pie was probably the quintessential version, and likely made with a really good homemade apple cider vinegar, so it was sort of a combo apple and lemon thing, but all its own.” Lundy’s favorite is brown sugar pie, which is a kind of chess pie (and also contains cornmeal) but is made with brown sugar instead of white. She describes it by simply saying “It's heavenly.”

If a taste of heaven sounds good to you, go ahead and give this recipe for orange buttermilk chess pie a try. 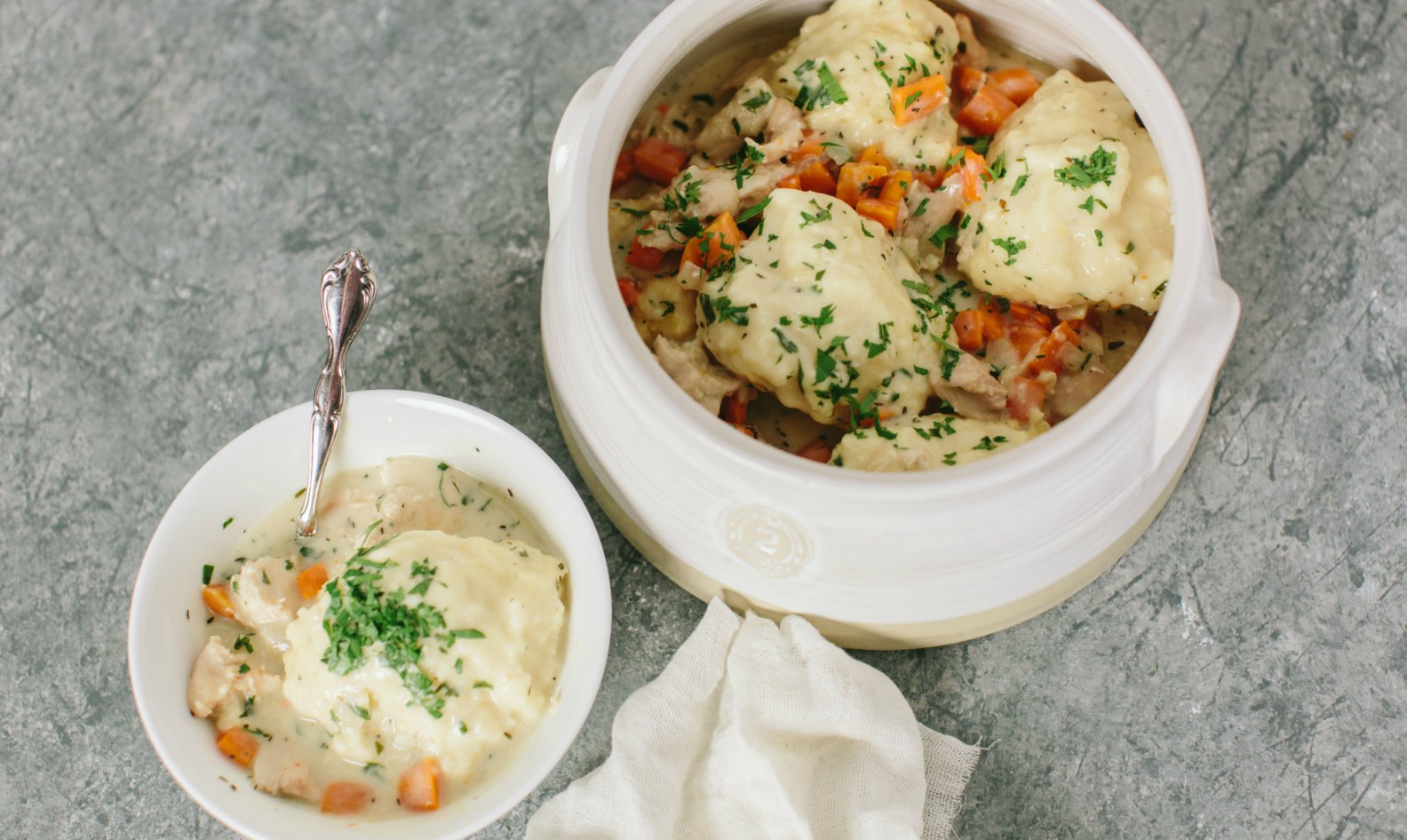 Combine the comforting elements of a soup, noodle and biscuit, and you’ll have a bowl of chicken and dumplings. With puffed pillows of dough floating in the stew, dumplings are like life rafts to rescue us from hard days or chilly nights. Served throughout the South, Executive Chef Ben Thibodeaux of Cavan in New Orleans chooses it as a top dish to learn (along with the super-local stuffed mirliton). “It's a Southern comfort dish that everyone loves,” he says. “It's easy to make and hits all the right spots.”

Remind yourself today just how comforting life can be with this chicken and dumplings recipe. 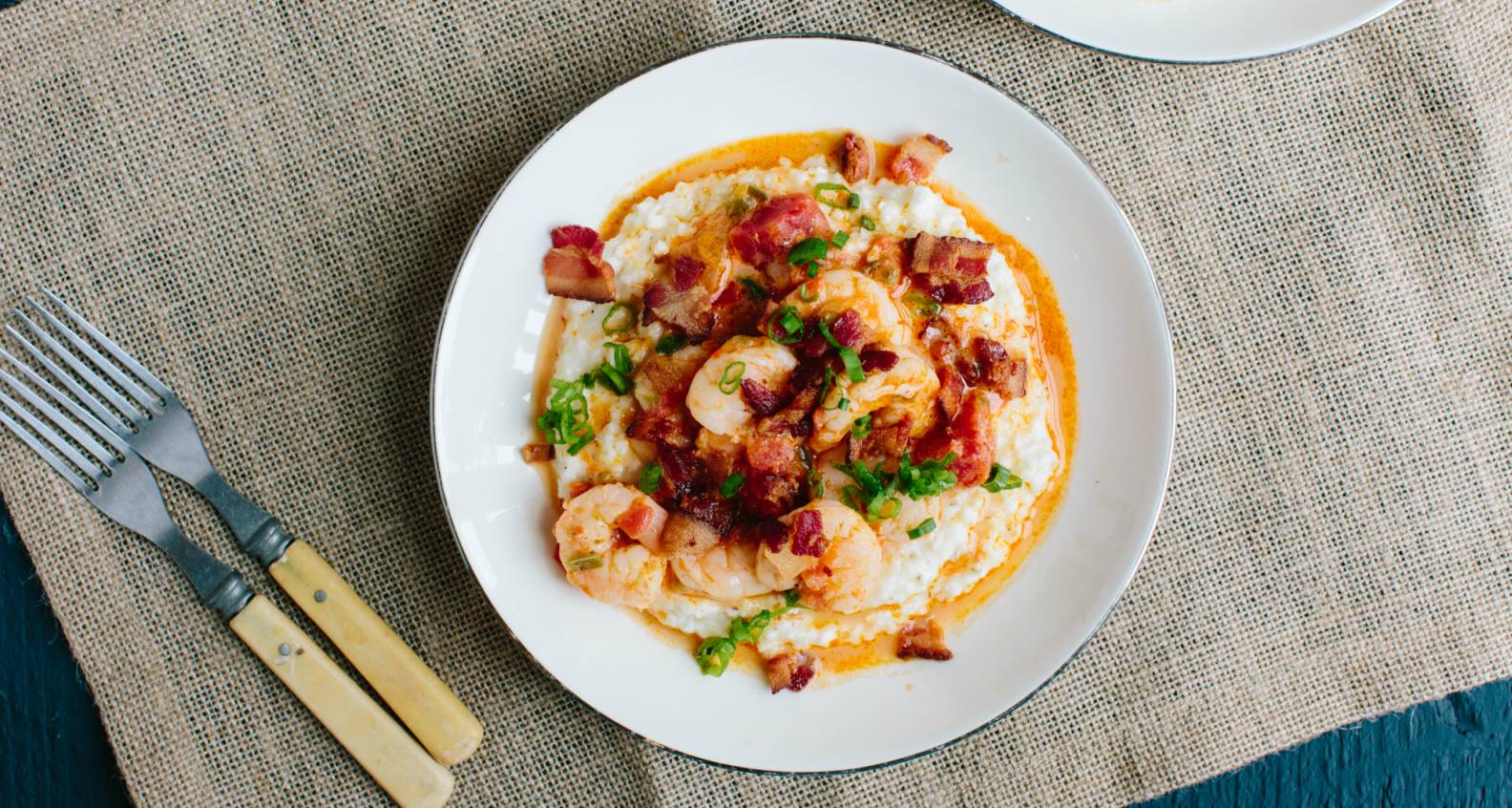 Shrimp and grits might have swept onto menus across the South, but it’s specifically lowcountry at its core. With shrimp from the waters and corn from the land, this dish brings together two of the region’s favorites in a dreamy collection of textures. The classic, comforting dish, warm and satisfying with sustenance to spare, has been riffed on endlessly, with elements that may or may not include green onion, mushroom, tomato, bacon and butter, among others. Finding your favorite elements to include is all part of the fun, and learning to master a favorite version guarantees a comforting dinner you can pull from your apron pocket and impress any Southerner anywhere, anytime.

Luckily this shrimp and grits recipe is perfect for anybody with one hour to spare. 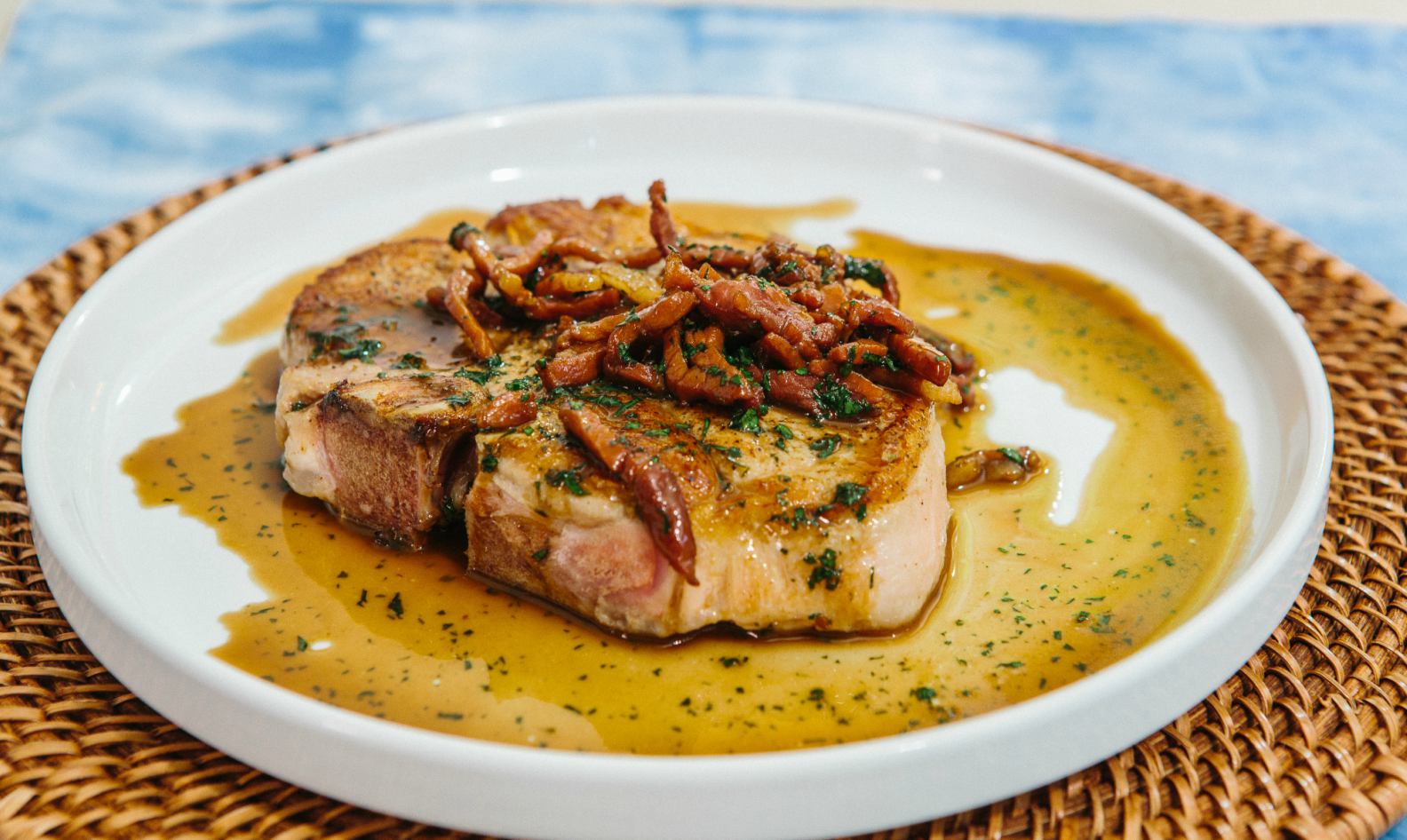 Ask Chef-Owner Justin Burdett of Local Provisions in Asheville, North Carolina, about essential Southern recipes and he’ll fawn over a humble gravy known as “red eye.” Made using a mixture of ham drippings and coffee, the process begins when country ham hits the skillet, marking it with salty drippings that are useful when making the gravy after the ham has been removed. The cook can then add on-hand ingredients, which can include coffee, a touch of butter to add a bit of richness and possibly brown sugar. “It's incredibly versatile and so specific to the South,” Burdett says. “It's more specific to this region than just about anything.” It’s also one of the most economical ways to bring Epicureanism to your kitchen without turning to excess. Next time you find yourself with a surplus of coffee, put it to use with this red-eye gravy recipe (plus a cast iron-seared pork chop). After all, no self-respecting Southerner should ever allow that one last swig to go to waste.

Get the recipe for cast iron pork chop with red-eye gravy. 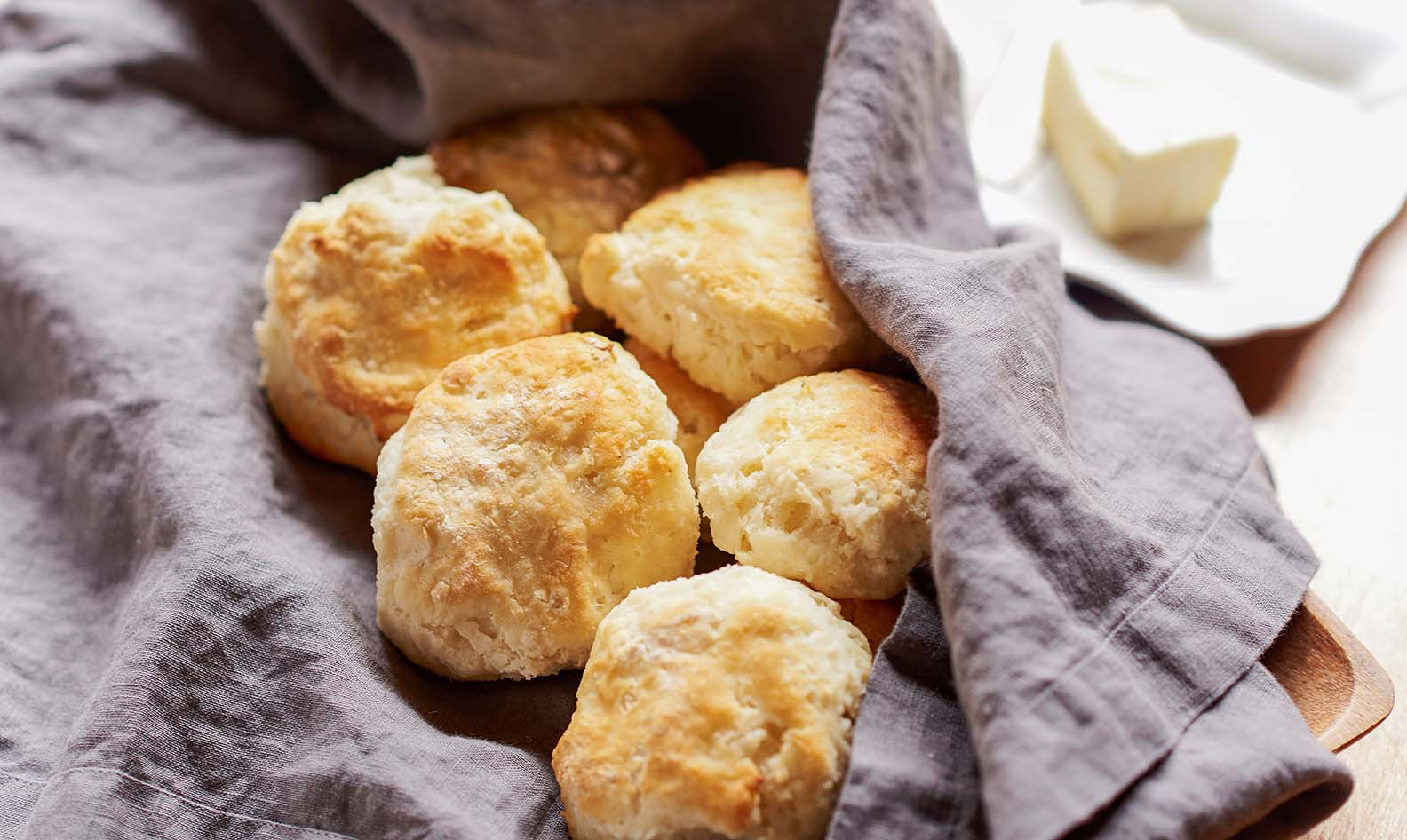 Not much says “home” in the morning more lovingly than a batch of scratch-made biscuits. Many of us in the South have stories about elders with inimitable talents for making biscuits, usually using no-frills, bootstrapping techniques such as scooping flour from a large sack with something like a jelly jar. Sure, baking has earned a reputation for precision measurements, but this bread is more apt to include directions that allow for that elusive and abstract “feel” thing (and few things make us feel better than biscuits). It also stirs in us that emotional connection to the people and places of our upbringing, which makes the effort in learning the nuances of biscuits enjoyable. While there are many ways to make a biscuit – with some preferring butter over lard and buttermilk over regular whole milk — it’s a process that takes practice before your method will be perfected. Don’t let that trouble you; the trick (and the fun) lies in experimenting with various versions until you find one you love and can make by heart.

A great place to start is this recipe for hot, crusty buttermilk biscuits, shared with us by famed Southern chef Scott Peacock.