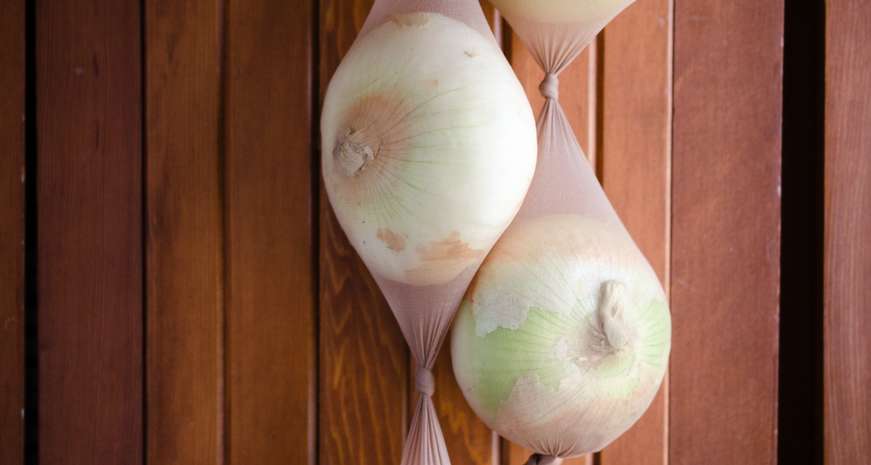 You might be a Southerner if you associate panty hose with onions. And, no, it’s not weird or kinky. Pretty much any Southerner worth their salt knows that the best way to store a springtime crop of Vidalia onions is to tie them up in a long, knotted train of sheer tights and hang them in a cool, dry place as long as they'll last.

The Vidalia onion harvest is typically from late April through mid-June. In this age of season-less grocery stores where both strawberries and winter squash are always available, there's something perfectly wonderful about that tradition of grabbing the onions at their peak.

Seasonality aside — why are these onions so special? Unlike a typical yellow or white onion, they are don't have that pungent bite and they're shaped more squatty than round. To be considered a true Vidalia, an onion has to be grown from a specific Yellow Granex hybrid in a 20-county area in southeast Georgia surrounding the town of Vidalia, where there is a naturally low level of sulfur in the soil. Sulfur is what gives alliums like onion and garlic their distinctive bite — so it makes sense that if there’s not much sulfur in the soil, there won’t be much sulfur in the onion. In addition, the sandy soil and temperate weather of the coastal plane create the perfect environment for Georgia’s sweet onion. Grown elsewhere, that same hybrid simply won’t have the same taste. 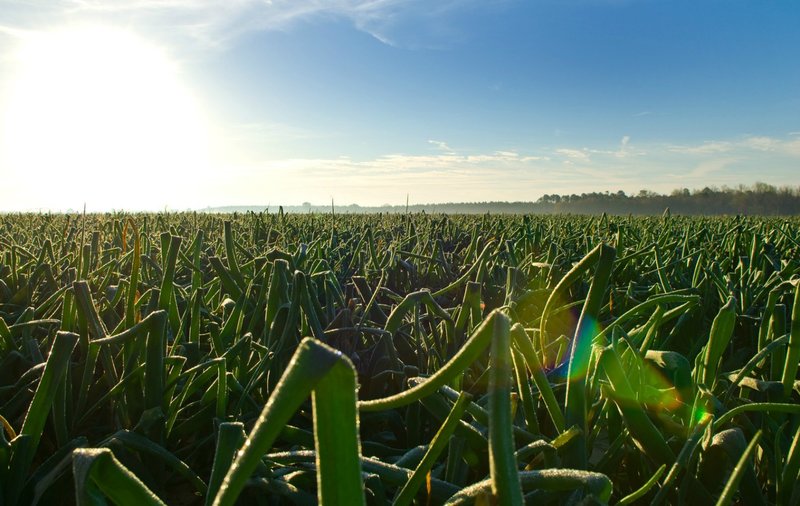 The Vidalia Onion Act of 1986 created regulations governing the growth and marketing of these trademarked onions, which included permitting the agricultural commissioner the authority to set the first date the onions could be shipped. This particular rules is not always popular with the farmers, but it is, in effect, a form of quality control. What if the onions are shipped too early, aren’t ripe, and someone purchases a Vidalia that’s not sweet? It damages the brand. These onion regulations are the closest thing we have in the state of Georgia to appellation controlee, the French government-mandated certification granted to certain French geographical indications for wines, cheeses, butters and other agricultural products.

And, we’re talking about serious money here — about $150 million dollars of Vidalia onions are produced in Georgia every year. Just last week, I was seeking out Vidalia onions for this article and was told by Holly Chute, the executive chef of Georgia Grown, that Georgia law states the Vidalia onions could not be shipped this year until April 20! I had to get specially approved bootleg onions!

Nearly every article about Vidalia onions says they are sweet enough to eat out of hand like an apple. Well, they may be, but I am not sure why one would. There are plenty of other ways to enjoy them, and pure and simple treatment seems to be best. 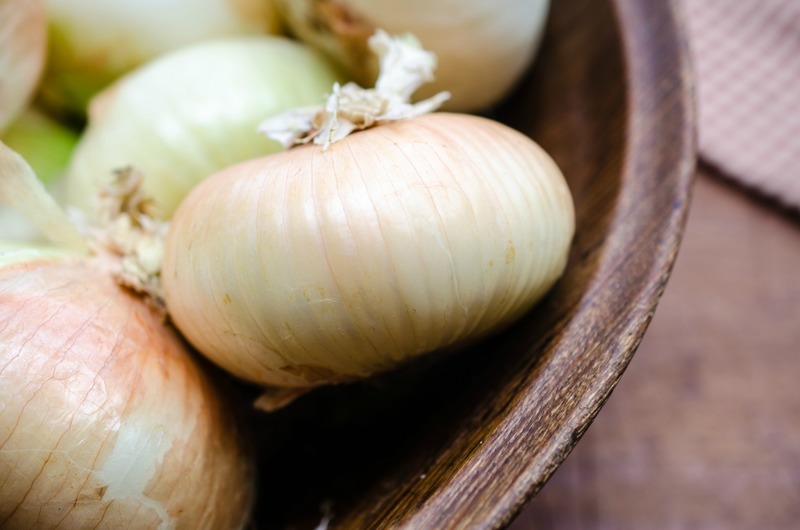 Vidalia onions are crisp, juicy and delicious served raw and thinly sliced on a sandwich, in a salad, or in slaw. A snappy white slab of Vidalia on a cheeseburger hot off the grill is one of life’s purest pleasures. Another favorite old-fashioned Southern side dish consists of translucent paper-thin rings of Vidalia onion and garden-fresh cucumber drizzled with a dash of sharp vinegar, seasoned with salt and freshly ground black pepper, and perhaps garnished with a snip or two of fresh chives or parsley. Later in the summer when the produce really begins to come in, the marriage of sweet sliced Vidalias and meaty, pungent tomatoes doused in green golden olive oil, kissed with smattering of sea salt, and swimming in their own winey juices is a dual exercise in glorious excess and restraint.

Though undeniably incredible raw, these special Georgia-grown onions become almost candy-like when cooked. A common first rite of spring is the tremendously popular recipe of scored whole onions topped with a pat of creamy butter and cooked in the microwave or baked in the oven until meltingly soft. The tender layers separate and bloom into a pale ivory flower tinged with a mere hint of green. They soar grilled, their blackened, deliciously bitter edges contrasting against the sweetness of the tender rings.

One of the most famous Vidalia onion recipes is baked onion dip. On the internet, there are pages upon pages of this ridiculously simple dip of raw Vidalia onions, mayonnaise, and copious amounts of cheese. Oh, and possibly hot sauce. Almost every recipe gets five stars! But, when you start reading the actual comments, there’s usually a hearty thread of irritation regarding pools and puddles of grease on top. 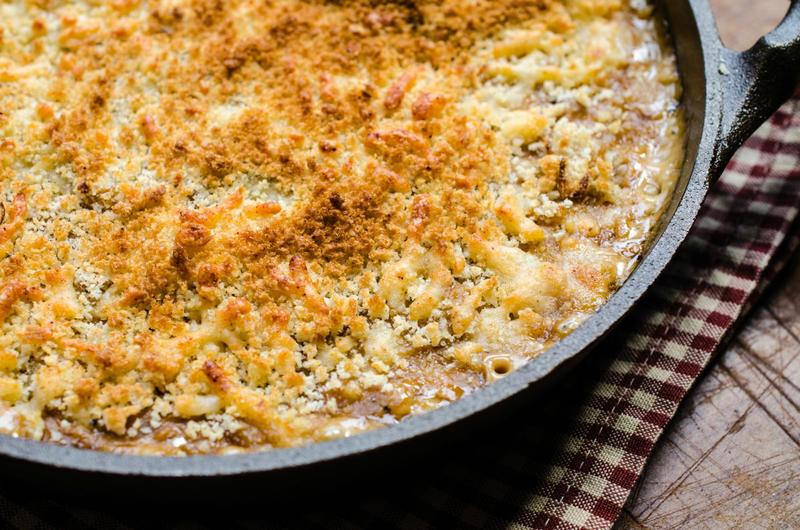 No kidding! One recipe I discovered called for one cup of mayonnaise, three cups of cheese, and a mere two cups of onion. This recipe made about three cups of dip, yet due to its high fat content, it claimed to yield forty-five servings! Now, I’m not overly puritanical about fat and calories. Yes, I wrote a book called "Lighten Up, Y'all," but I am, after all, a French-trained chef. I find success with balance and moderation — and perhaps more importantly, my philosophy in the kitchen is to use really good ingredients and do as little as possible so as not to mess them up.

My grievance with most baked Vidalia onion dips is not with the fat or calories, it’s that the cheese hides the bright, clean, flavor of the sweet onions. I don’t want these Georgia gems to be dull and lost; I want to celebrate them!

The classic bistro dish, French onion soup, crowned with a golden brown crouton that's topped with gooey, molten Swiss, is a superior example of achieving balance in a dish. It showcases the magical taste of tender, slow-cooked onions with just enough nutty cheese. With this soup, and a nod to my culinary training, as inspiration, I developed a recipe for baked, caramelized dish that can be served as a dip or as a vegetable side dish — a perfectly simple celebration of those panty hose-clad Vidalias I’ve now got in storage. 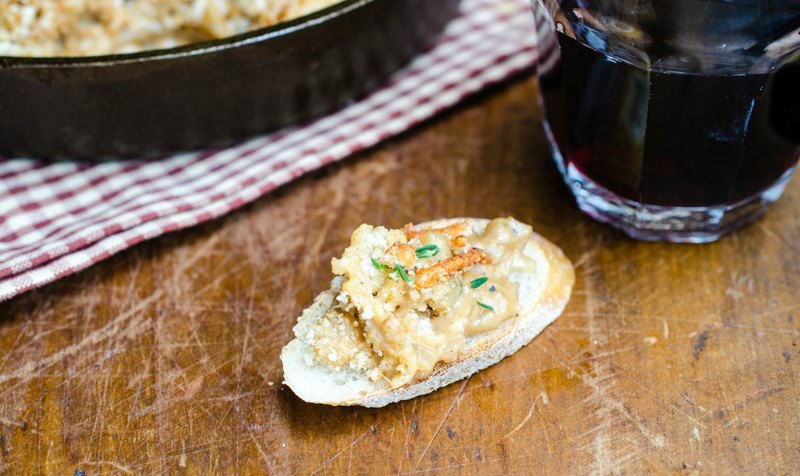 Instructions
Heat the oven to broil.

In a medium bowl, combine 1/2 cup of the cheese with the panko and paprika.

In a medium ovenproof skillet, heat the oil over medium high heat. When the oil is shimmering, add the onion and season with salt and pepper. Cook, stirring occasionally, until the onions are golden brown, about 15 minutes. Add the vinegar and cook until the skillet is dry, 1 to 2 minutes. Stir in the flour and garlic until thoroughly combined. (The mixture will be slightly dry and pasty.)

Stir in the milk and bring to a boil over high heat. Remove from the heat and stir in the remaining 1 cup of cheese with the thyme and cayenne. Season to taste with salt and pepper. Use a wooden spoon to level out the onions and top with the reserved panko mixture.

Broil until the cheese is melted and the crust is golden brown, about 5 minutes, depending on the strength of your broiler. Serve immediately.

Photo (field of onions): Georgia Department of Agriculture
All other photos: Virginia Willis