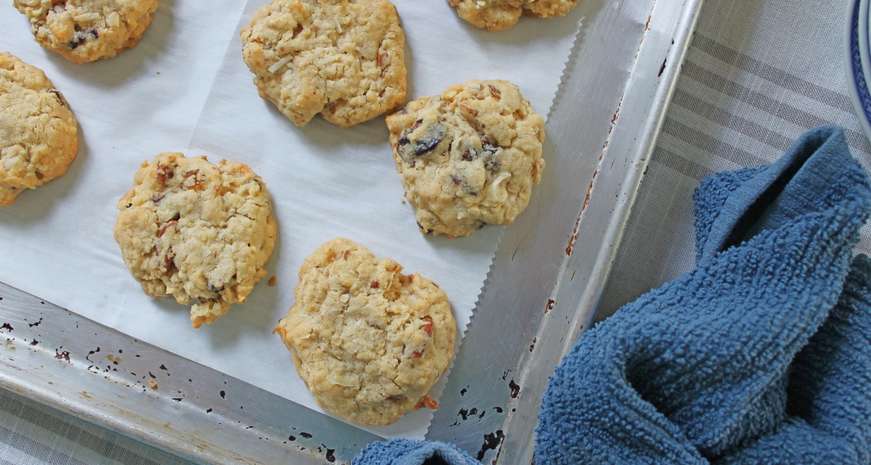 In our series Saving Southern Recipes, Editor-in-Chief Kate Williams explores the deep heritage of Southern cooking through the lens of passed-down family recipes.

There are few classic Southern dishes more contentious than ambrosia. Mention it around my mother and she'll cringe; her idea of the salad is marshmallow, gelatin and mayonnaise-laden, a strange and sweet concoction that is as far from her idea of a "food of the gods" as possible.

Of course, plenty other Southerners take pride in their version of the dish, whether it be made with sweetness dialed up to 11, or toned down and citrus-heavy. But whatever ambrosia is in your mind, its hard to argue with the salad when its ingredients are transformed into cookies.

Southern Kitchen reader Rafa Santos introduced me to the idea of ambrosia cookies earlier this spring. He said his grandmother used to make the cookies, but he had been unable to locate a recipe. From his memory, they were chock full of mix-ins: shredded coconut, chopped dates and raisins, chopped cherries and rolled oats. I had never heard of this particular combination, but, as it so often turns out, I was simply undereducated.

A quick Google search revealed dozens upon dozens of ambrosia cookie recipes, as varied as the recipes for the original salad. Some were more coconut heavy, like a macaroon, while others, with an oatmeal cookie base, sounded more like what Santos remembered. A few bloggers referenced the fact that similar desserts are also known as "fruitcake" cookies, which isn't particularly surprising, given the long list of dried fruit called for in most recipes. I'd side with Drick Perry, author of the Drick's Rambling Cafe blog, who insists on never calling them "fruitcake," as that name references a dish fraught with even more unease than ambrosia. 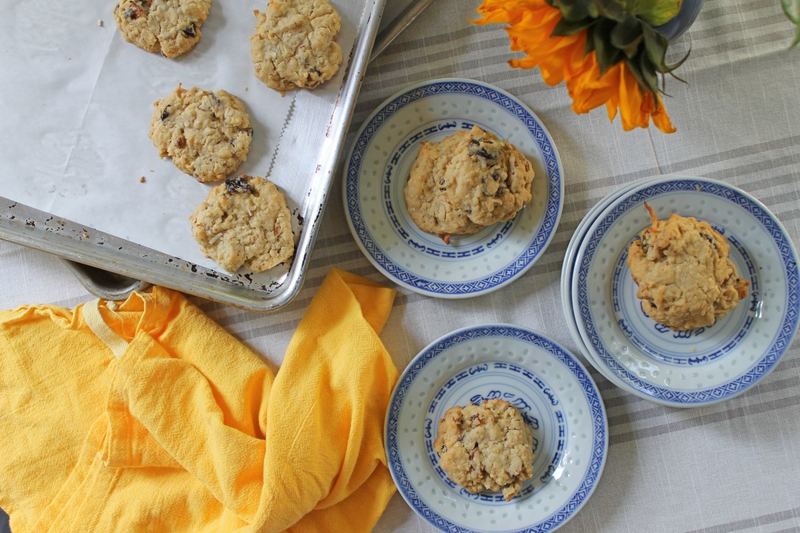 Perry said that the test of a good recipe is the inclusion of a few key ingredients — "brown sugar, coconut, pecans, dried fruit and flavors of citrus" — that mostly lined up with Santos's memory. Together, these two ingredient lists informed how I shopped for my batch of cookies.

I started with a basic brown sugar oatmeal raisin cookie and then added in a litany of ingredients. I really liked the idea of including cherries, but wanted to stay away from the sticky-sweet maraschino types. I also was able to find unsweetened coconut at my local Kroger, which I found a better match to all of the other sugar coming in with the dried fruit. Dried pineapple was a natural fit, and I also added in a small amount of chopped dates to suit Santos's preference. A generous amount of both lemon and orange zest keep the cookies strongly in ambrosia territory.

Ultimately, however, these cookie mix-ins are up to you. Aim to add about 3 cups of fruit and nuts, in addition to the coconut, to maintain the character of the original. And if you must add marshmallows, I'll agree to look the other way. 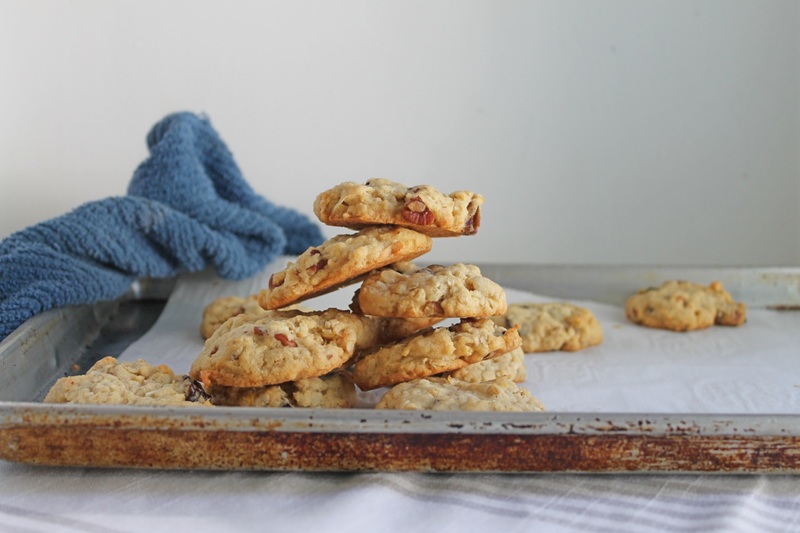 Ambrosia Cookies
Note: This recipe is highly adaptable; feel free to alter all of the mix-ins as you see fit. However, to keep the cookies in the spirit of ambrosia itself, make leave the coconut and citrus zests as written. (You can, if you must, use sweetened coconut flakes instead of unsweetened.)

In a large bowl, combine the oats, coconut, pecans, raisins, cherries, pineapple and dates. In a medium bowl, whisk together the flour, baking powder and salt. In a liquid measuring cup, combine the oil, egg, vanilla and citrus zests.

Shape the dough into 1 1/2-inch balls and place them about 2 inches apart on the prepared baking sheets. Press down to flatten the balls slightly. Bake the cookies, two trays at a time, until lightly golden brown around the edges, about 15 minutes. Rotate the baking sheets about halfway through the baking time. Let cool completely on the baking sheets. Repeat with the remaining dough. Serve, or store in a zipper lock bag for up to three days.

From the Amazon rain forest to spectacular fountains

From the Amazon rain forest to spectacular fountains