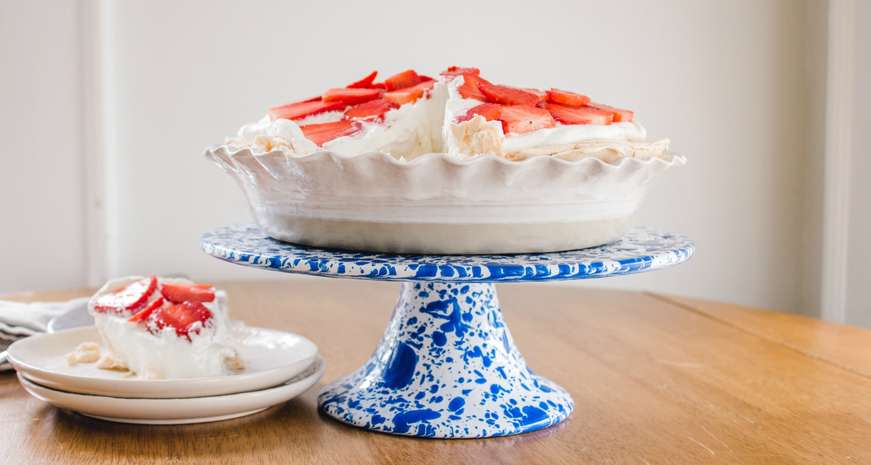 How to transform 3 pantry ingredients into a showstopping pie

Called angel pie, heavenly pie or the admittedly less-seductive upside-down meringue pie, this dessert is simply a meringue base, filled with cream, fruit, curds and (occasionally) syrups. When it inevitably falls apart into a delicious jumble, it is almost an Eton Mess, or Lanton Mess, depending on what fruit is on top. What I've decided to call an angel pie is a secret weapon of bakers across the country, but especially in the South, a pantry-ingredient pie that looks like a celebration dessert and is just as good for breakfast as it is before your evening nightcap. 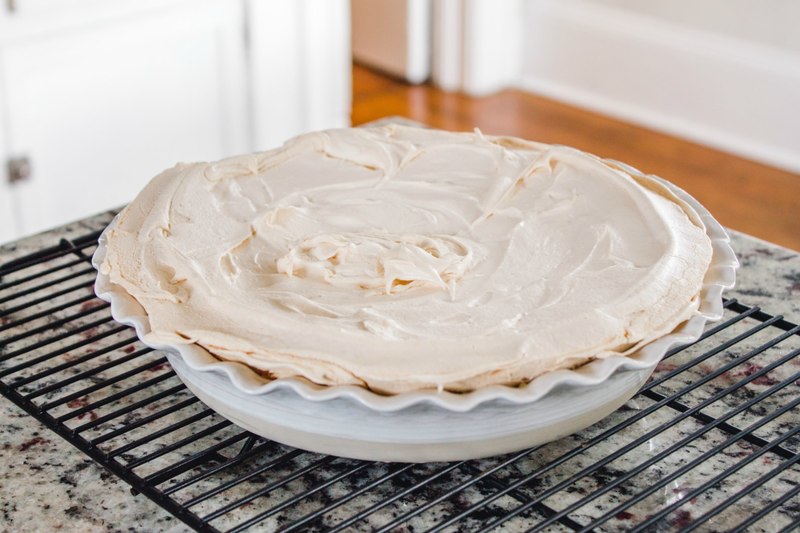 Recipes for meringues have been around since at least 1691, and cooks have likely been utilizing the aerating magic of whipped egg whites for longer. However, given the intensity of the beating needed to bring egg whites into a stable foam, meringues and meringue-like dishes were historically eaten by those with the resources to employ or enslave a cook to do all of that work. It wasn't until the advent of the mechanical egg beater around the turn of the 20th century that meringues really took off in home cooking.

The popularization of pavlovas, named to the ballerina Anna Pavlova, made meringue a full-on trend, the avocado toast of the 1920s, if you will. This angel berry pie is similar to that dish, yet by using a pie dish for meringue support, is far, far more forgiving. You needn't worry that your meringue is cooked perfectly to a crisp or that you billow its sides in the most beautiful manner. You'll be covering the whole thing in whipped cream anyway. 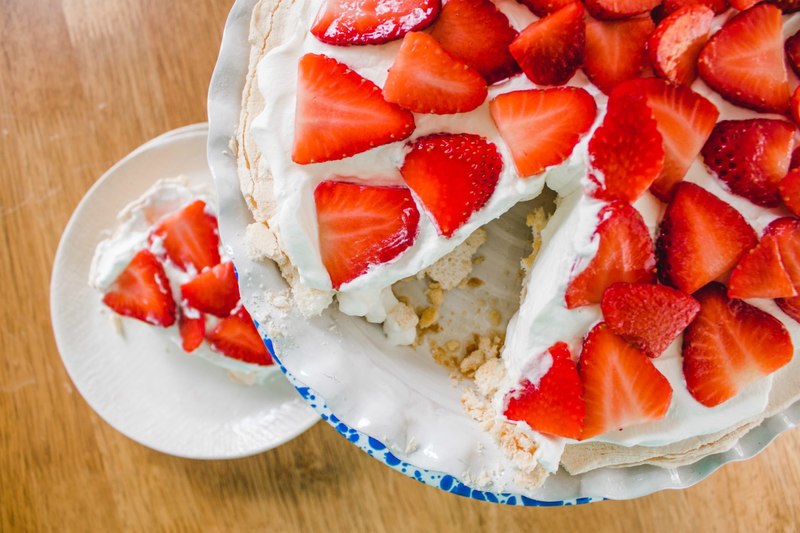 I've eaten this style of pie once before, but it was filled with cream-lightened lemon curd and topped with whipped cream. The strawberry-filled version I made this week, however, came from reader Elizabeth Lide's grandmother Emma. Lide told me that it is one of her favorites, and it's easy to see why. 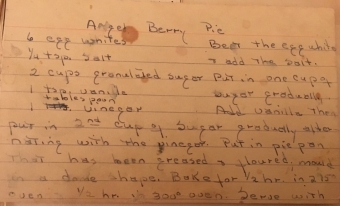 The meringue crust is just sweet enough to hold its form, with a hint of vanilla for depth. There's a soaring mound of straight-up whipped cream — no sugar — on top, followed by sliced strawberries or whatever fruit you'd like. Get a bite with all three components and it all balances out into a lighter, airier version of strawberry shortcake.

As written, Emma's recipe assumes a lot. You'd need to know already the proper texture for the meringue and how stiff to whip the cream to hold it all together. You'll need to guess at how to slice the berries, and how much of them to use. But beyond the meringue, these are fairly inconsequential issues. You can slip and slop your way to a great pie without much know-how. The only thing you do need — at least to make it easy — is an electric mixer. Yes, you can beat the egg whites and the cream by hand, but why would you? 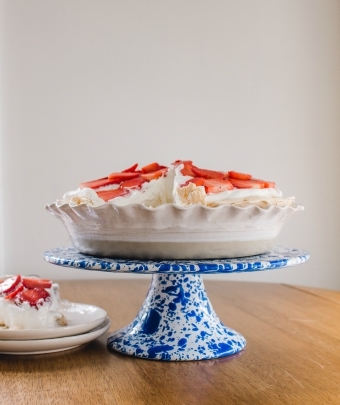 Using a stand mixer fitted with the whisk attachment, beat the egg whites and salt on medium-low speed until frothy, about 1 minute. Increase the speed to medium-high and continue to beat until soft mounds form, 1 to 2 minutes. With the mixer running, gradually beat in 1/2 cup of the sugar, followed by the vanilla. Gradually beat in about 1/4 cup more of the sugar, followed by the vinegar, and 1/4 cup more sugar. Continue to beat on medium-high, scraping down the sides of the bowl as needed, until glossy, very thick, and holds stiff peaks, 2 to 4 more minutes.

Transfer the egg white mixture to the pie plate and smooth the top. (It should completely fill the pie plate.) Run a finger along the inside rim of the pie plate to create an indentation along the exterior edge of the meringue. (This step will help the meringue to rise evenly.) Wash the mixer bowl and attachment.

Bake for 30 minutes. Increase the oven temperature to 300 degrees and continue to bake for an additional 30 minutes. Turn off the oven, but do not open the oven door. Let the pie cool completely in the oven, 2 to 3 hours.

While the pie is cooling, place the strawberries in a medium bowl and toss gently with the remaining 1 1/2 teaspoons of sugar. Refrigerate until ready to use.

Once the pie has cooled, place the heavy cream in the mixer bowl and beat on medium-low speed until frothy, about 1 minute. Increase the speed to medium-high and continue to beat until the cream forms slightly-firmer-than-soft peaks, about 2 more minutes.

Spread the whipped cream into a mound on top of the cooled meringue, leaving 1/2 to 1/4 inch of visible crust along the outside edge. Lay the strawberry slices in a decorative pattern on top of the cream. Refrigerate for at least 1 hour before serving.