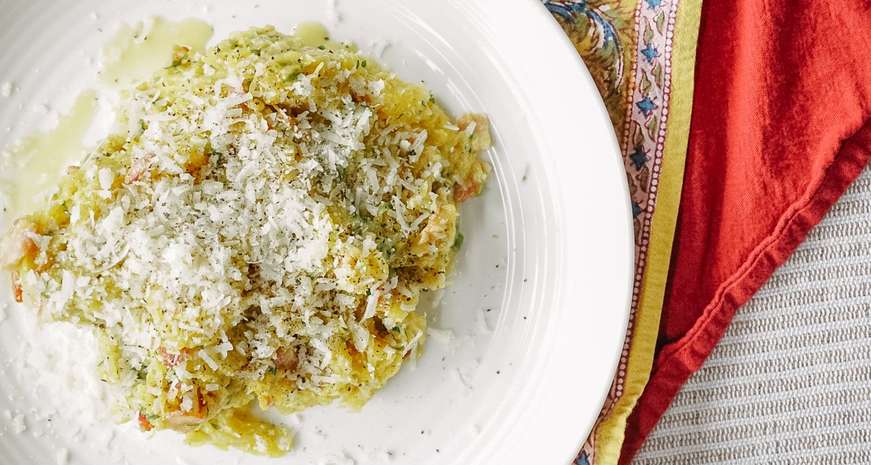 Alternatives to durum wheat pasta can be found all over the supermarket these days. You can find extruded pastas made from brown rice or quinoa mingling among the Barilla, as well as vegetables of various colors and textures spiralized into “noodles.”

However, before tools and science came into play, there was one pasta substitute to rule them all: the humble spaghetti squash. When properly prepared, this gourd can hit all the comforting notes of dried pasta without weighing you down with a mountain of carbohydrates.

First, while not similar in mouthfeel to pasta, cooked spaghetti squash can still be extracted in long strands, in a way that mimics a spaghetti or angel hair pasta.

Here's how we cook it: Cut the squash in half lengthwise, remove the seeds, brush the inside with olive oil and season with salt and pepper. Place in a baking dish, cut side down and pour about a half inch of water into the pan. Pop in a hot, 400-degree oven, and let 'er roast until the outer skin begins to feel tender and gives under the pressure of your fingers. Remove it from the oven and use the tines of a fork to scrape out the flesh into a bowl. There is a window of time during the cooking process that yields tender yet “al dente” spaghetti squash. Leave it in the oven too long and the squash becomes mushy. Granted, it’s still perfectly edible at that point; but if you let it cook 'til mushy, you'll lose some of the illusion that you’re eating “spaghetti.”

Next, because spaghetti squash is less sweet than most of its autumnal cousins — butternut and acorn squash, for example — it tends to be more of a harmonizing voice in savory dishes. Spaghetti squash can stand up as a hearty landing pad for meatballs in tomato sauce, whereas those classic Italian flavors would be much more dissonant with butternut squash. The stringy squash shines when tossed with a zippy pesto or a bright vinaigrette in an updated pasta salad.

For an unbelievable symphony of flavors, try using spaghetti squash as the base for one of Rome’s most popular pasta dishes: spaghetti carbonara. Smoky bacon, salty Pecorino Romano cheese and rich egg yolk form a sauce that clings to the cooked squash much the same way it would a pasta noodle. Since the dish’s name reflects its popularity among Italian charcoal workers, don’t skimp on the black pepper. The result is a plate of food that’s greater than the sum of its parts. Now, mangia bene!

Check out the recipe for our spaghetti squash carbonara