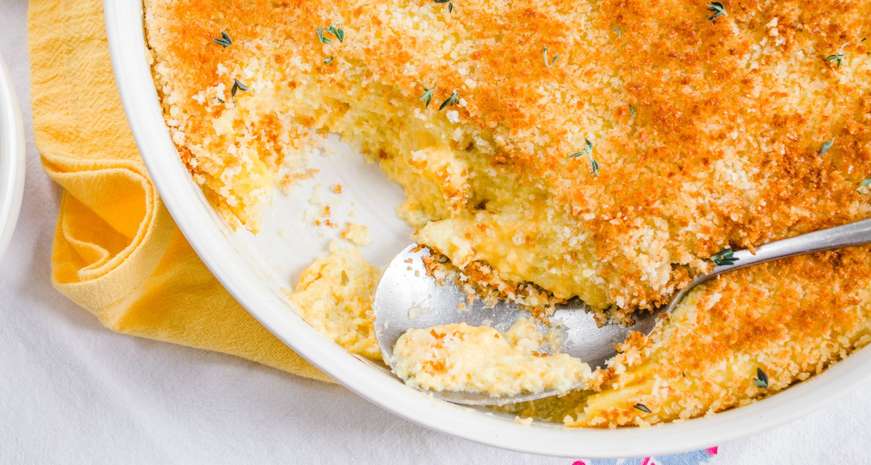 How to make the best-ever Southern squash casserole

I used to hate, hate, squash casserole. I'm not really sure what the root of my aversion was — of all the cheese-filled, cracker-topped casseroles out there, this one wasn't too offensive (I mean, you can't even really taste the vegetables) — but I would shudder at the thought of even trying it. Pair it with lima beans or succotash and eight-year-old me would shudder and suffer through the teensy bite I was forced to take in between forkfuls of chicken.

As I grew up and into my more adult palate that appreciated things like limas and buttered squash, I'd love to say that I got over my shudder-filled reaction to vegetable casseroles but, um, I didn't. I'd avoid it at buffet tables and family reunions, opting for mac and cheese and collards. I'd never even thought to try making it at home — why ruin a vegetable that tastes perfectly good sauteed with fresh herbs?

But listen, I can't really say that I'm cooking my way through classic Southern recipes without making squash casserole now can I? Summer squash, and its various relatives in the cucurbita genus, has been in the Americas since long before Europeans arrived. Evidence of the first domesticated squash, which was likely a relative of the yellow crookneck squash most commonly used in said casserole, was found in Oaxaca and thought to have been grown as far back as 8,000 to 10,000 years ago. A similar variety was thought to have made its way to the Missouri area around 4,000 years ago. Squashes were an important part of Native American agriculture; they were grown with maize and pole beans as part of what we call the "Three Sisters" system of companion planting. 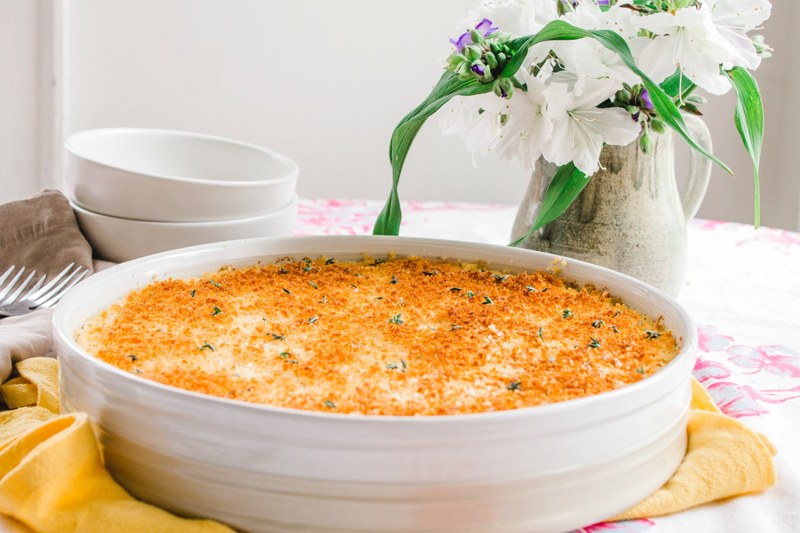 This is all to say that Europeans, and their descendants, were far from the first people who thought it was a good idea to eat these easy-to-grow vegetables. All that cheese, butter and other extravagances we added to our casseroles, however, came later.

I couldn't find a reliable timeline for when squash casserole made its way into the Southern culinary canon, but if I had to guess, it was a long, slow march from simple cooked squash to the dish with which we're familiar today. Writer and Southern food scholar Damon Lee Fowler wrote on his blog that older recipes from the 19th and early 20th century didn't contain cheese, but today, it is basically mandatory. I'd be willing to bet that the first squash casseroles were simply mashed vegetables with a little flour, egg and milk to bind. Many casserole recipes today scrap the egg and opt for a looser melange of sliced squash and toppings, while others, most often called "souffles" contain a high proportion of eggs and milk.

It is this second type, the "souffle," that I ultimately decided to make at home. This recipe is a fancier version of squash casserole, with pureed vegetables and a crisp, buttered breadcrumb topping. There is, of course, plenty of cheese, but the texture of the casserole is smooth, and there are none of those pesky squash seeds that smush, mush and sog out many a crisp topping.

While I was cooking this dish, which was an adaptation of a recipe from (once again) the prolific contributor Elizabeth Lide, I realized that my big problem with squash casserole was in its texture. Summer squash is watery; when the casserole is made with large rounds, they continue to leech water and just end up weirdly slimy and pulpy. If, however, you de-seed the squash before cooking, and steam the squash in its own juice, you'll wind up with more concentrated flavor in the vegetable itself. Drain it well and puree it until smooth, and you'll never have to worry about mushy veggies in your casserole again.

Yep, this requires more work, but you can 100 percent assemble the casserole ahead of time, stick it in the fridge (or freezer), and pop it in the oven when you're ready to serve. Just don't skip the breadcrumbs at the end — they'll add an undeniably wonderful crisp texture to what is now going to be a potluck classic in my house. 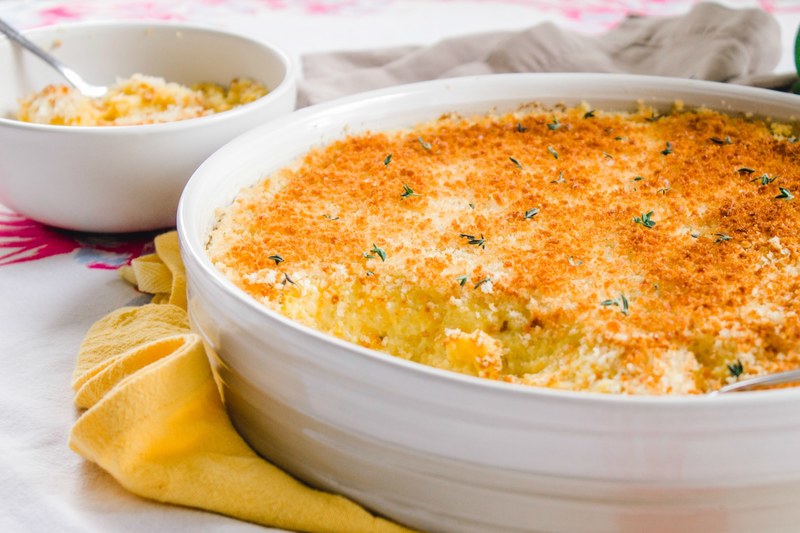 In a Dutch oven, melt 6 tablespoons of the butter over medium heat. When the butter is foamy, add the onions and 2 teaspoons salt. Cook, stirring occasionally, until translucent, about 5 minutes. Add the squash and sugar and stir to combine. Cover the pot and continue to cook, stirring about every 5 minutes, until the squash has given up much of its liquid, 20 to 25 minutes. Uncover and continue to cook, if needed, until the squash and onions are very tender, about 10 minutes.

Pour the squash mixture into a large strainer set over a sink and press gently to remove as much liquid as possible. Transfer to a food processor and process until the mixture forms a smooth puree, about 30 seconds. Transfer to a large bowl. Stir in the cheese, milk and flour. Season to taste with onion powder, garlic powder and additional salt, if desired. Stir in the eggs.

Transfer to the prepared baking dish and bake the souffle until it is only slightly jiggly in the center, about 45 minutes.

Meanwhile, melt the remaining 2 tablespoons butter. Pour it into a medium bowl and stir in the breadcrumbs. Season to taste with salt.

After 45 minutes of baking, remove the souffle from the oven and top evenly with the breadcrumbs. Return to the oven and continue to bake until set, about 10 minutes. If the top is not yet browned, turn the oven to broil. Broil just until golden brown, 1 to 1 1/2 minutes.

Let cool for about 10 minutes, sprinkle with fresh thyme, and serve.