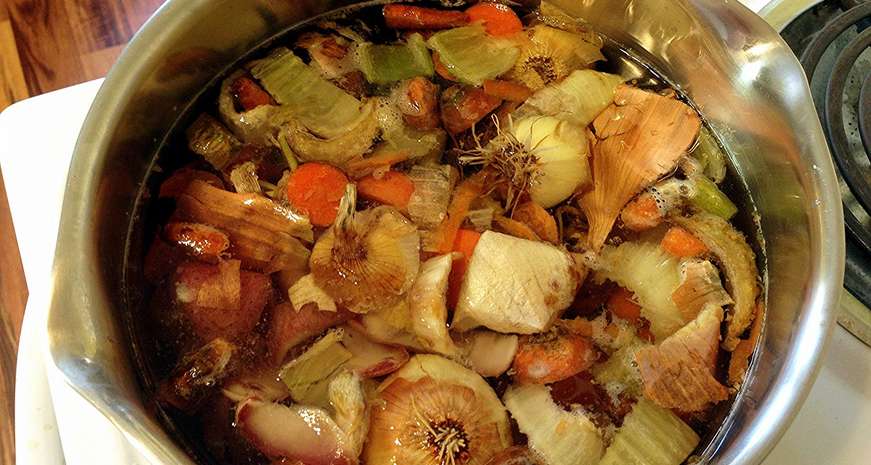 For always-on-hand comfort food, make a never-ending pot of stock

Every night at Wattana Panich, the leftover broth of the kway teow beef noodle soup is removed from the Jacuzzi-sized wok in the center of the kitchen and filtered. The chunks and particles are discarded, the broth is refrigerated, and the next morning the leftover broth is used as the mother of that day's kway teow.

This type of dish, and the method behind it, is sometimes called perpetual stew. The idea is that every day the stew/soup/broth/stock, depending on the exact ingredients, gets eaten, added to and heated. Perpetual stew makes use of the fact that extended heating can extract nutrients from food, while keeping it sterile and safe to eat.

Feed the beast
In some ways, perpetual stew resembles the sourdough starters that some bakers will adopt into their families and use for years, sometimes naming and even assigning them a gender. But while a starter must be painstakingly maintained, a perpetual stew is re-killed every day in the bubbling cauldron. Nonetheless, that dead elixir has the ability to breathe life into any savory dish you could imagine. Use it to cook rice, deglaze a pan, add subtle complexity to a pasta sauce.

And, of course, when you have perpetual stew you always have soup. Add some non-scrap carrots, cut into bite-sized chunks, some pieces of celery, an onion cut in half, some potatoes, maybe some meat. Eat what you wish of the soup and let the rest of the veggies cook into the broth, to be strained later.

If you happen to go through a lot of onions, carrots and celery, it may be possible to keep your perpetual broth going solely from scraps, without spending any money. If you can feed it a few bones once in a while, all the better. A vegetarian broth can have great flavor, but you won't feel it in your own bones the way you can feel a bone broth. Any kind of animal part — bones, meat and everything in between — will help.

The next most-important ingredient is some kind of tomato product, which adds acid and umami. Any undrunk wine can be added, as can most root vegetables, including the peels, taproots and stems.

Be careful to avoid ingredients that will swing the flavor of the broth in an irreversible way. Strong-flavored ingredients like kimchi, blue cheese or anything that might be described as "an acquired taste" probably won't help. If you are into aromatics like ginger or lemongrass, the unused peels and ends can be added. Nuts and beans will leave a lasting impression, but the stock itself can and should be used in cooking beans or lentils. Just don't add those leftovers back to the perpetual stock pot. 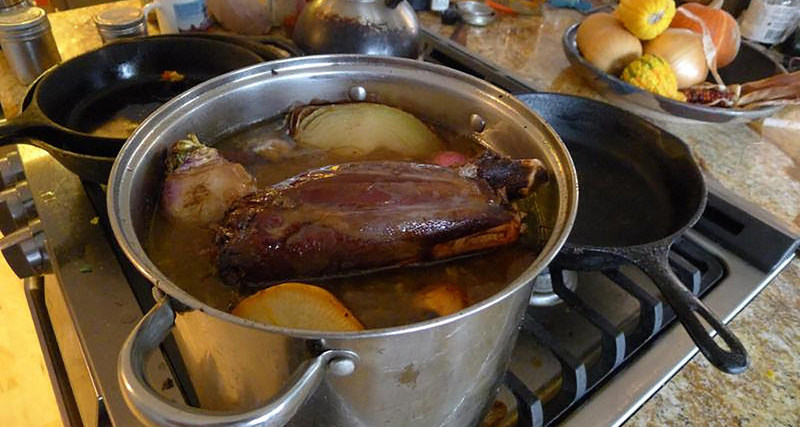 Fat broth or skinny stock?
The most subjective part of perpetual stew is the degree to which the fat is skimmed. It depends on the type of fat in the pot, and the preferences of your target audience — aim to please the least fat-tolerant. Chicken and pork fat tend to be appreciated more than lamb or wild game. If it has fat (and salt), it's considered broth. If the broth contains pieces of meat and/or vegetables, it's a soup or stew. Without fat and salt (and chunks) it's stock, which is more versatile but needs seasoning before serving. I prefer my perpetual stew at the stock end of the spectrum, so I skim that fat. It can always be added later.

At Wattana Panich, they strain the soup in the evening, after the close. I recommend doing the same. Turn it off early enough that you give it time enough to cool, then strain it and refrigerate the liquid portion.

You may ask, why not leave the onions and carrots and all the chunks in the pot forever, and let them continue to contribute more of their flavor and nutrients? The answer is that they have already given all they have to give, and have nothing left. Even meat will eventually give up the ghost. The bones, however, will keep giving. So you can pick them out and put them back in the pot a few times.

My attempts at perpetual stew have not withstood the tests of time. It might get to a week of age before a cold day when a lot of people want soup and it's gone. So I am perpetually making temporary stew. That's good enough for me.

Here is how I ran out last time: this recipe for cháo, the Vietnamese version of congee, a simple rice-based porridge common across Asia. This recipe comes from the queen of Vietnamese food, cookbook author Andrea Nguyen. Warm, soft and saturated with flavor, it is about as comforting as a food can get.

Instructions
Put the rice in a 4-quart pot. Fill the pot with water, and swash the rice around with your fingers. When the rice settles, pour off the water. Repeat.

Add the stock, ginger and green onion to the pot. Bring to a boil over high heat, then partially cover and reduce to a vigorous simmer for five minutes, during which time, as Nguyen describes it, the rice "... should bounce in the bubbling water without the water boiling over the pan sides."

Stir, to ensure none of the rice has stuck to the bottom, and reduce the heat to a gentle simmer. Continue to simmer, covered, for about an hour, "... or until the rice grains have bloomed and curled, releasing their starches to thicken the soup and turn it creamy white." Serve.

Get cozy with these Southern stews

Get cozy with these Southern stews