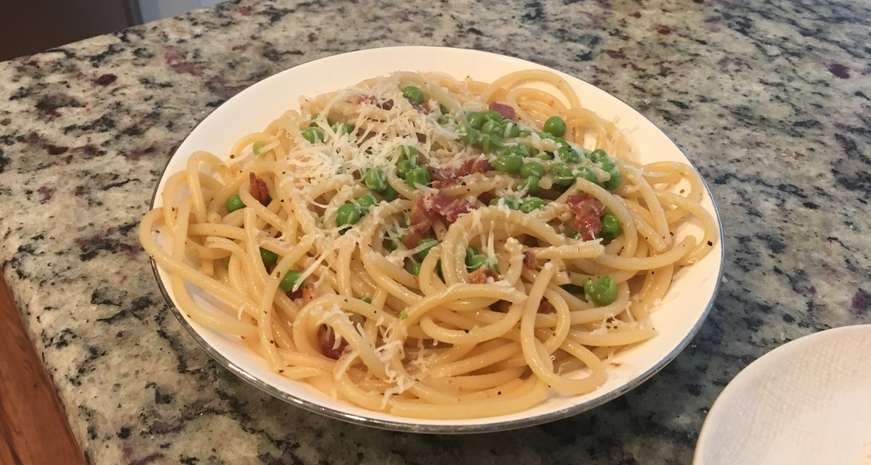 Bucatini with Peas and Bacon

You can make this bacon-y, cheesy pasta dish on any weeknight without a trip to the grocery store

I eat a lot of pasta. Like, a lot. In my two-person household, we probably go through three pounds of the dried stuff a week, and that's not counting what we eat when we go out to restaurants. This carb-centric lifestyle is partially a choice, and partially a necessity; pasta can be, after all, a super quick and easy weeknight dinner solution, and there are few things I like less than wading through an hours-long dinner recipe at 8 p.m. on a Wednesday.

Dried pasta can be an equally perfect blank canvas for highlighting the bounty of a colorful farmers market haul as it can be the centerpiece of a pantry staple-filled meal. It is the latter that I find myself cooking far more regularly than dishes filled with perishables. Pantry pasta is my new specialty.

In fact, I've started cooking these so-called pantry pasta meals so frequently that I've come up with some particular rules for them. Number one: The dish may only include up to (but not necessarily) one perishable ingredient. All of the other ingredients must be able to be held either in the pantry or refrigerator for at least a month or so at a time. In other words, they must be pantry staples. Rule number two: The dish must be quick; ideally the "sauce" should be able to be made in the same amount of time as it takes to boil water and cook pasta. There's a small amount of leeway here; I'll still count a dish as pantry pasta if the time between pulling out a cutting board and sitting down to dinner is 45 minutes or less. Rule number three: There should be very little measuring involved. Do you like cleaning all of your measuring cups and spoons every night? Nope. Didn't think so.

I've been documenting these meals on my Instagram stories (#pantrypasta) for the last month or so, and I figured it was about time I shared them with you. 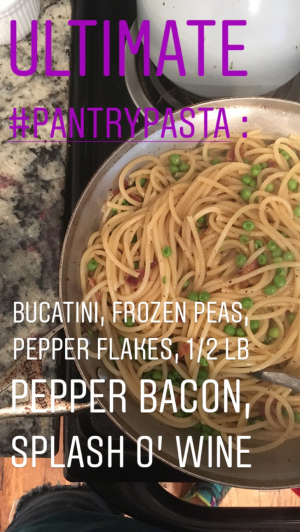 First up is a dish I've referred to as an ultimate pantry pasta — it's made up of all pantry staples, and, if you're efficient, can be ready to eat in less than 30 minutes. Bucatini (or spaghetti), bacon (preferably pepper-coated), frozen peas and Parmesan are pretty much all you need to pull it off. If you've got a half-drunk bottle of white wine in the fridge, great — use a splash or two. A sprinkle of red pepper flakes adds a little heat that is also totally optional. A final trick? Make sure your pan of bacon is cooked and crisp before the pasta and peas are finished cooking, and then you can simply transfer the hot pasta directly to the pan — no colander needed. It's not a one-pot pasta but it's pretty close.

Think of this dish as sorta carbonara-like, and sorta cacio a pepe-like, but it's not even trying to play being authentic. It's just gosh darn tasty.

Bucatini with Bacon and Peas
Note: To save time, cook the pasta at the same time as the bacon. Ideally, you'll want to time it so your pasta and bacon mixture are finished at the same time; however, it is easiest to start the bacon and return it to the heat once the pasta is finished.

Instructions
Spread the bacon slices out in an even layer in a large skillet. Place over medium heat and cook, stirring occasionally, until the fat has rendered and the bacon is crisp, 10 to 15 minutes. Stir in the pepper flakes and cook until they begin to sizzle, about 30 seconds, then dump in the white wine. Simmer the wine, scraping up any browned bits from the bottom of the skillet, until evaporated, 30 seconds to 1 minute. Remove from the heat.

Meanwhile, bring a large pot of heavily salted water to a boil. Add the bucatini and cook until almost al dente, 6 to 8 minutes. Add the peas and continue to cook until bright green and tender, about 1 minute. Remove the pot from the heat.

Use tongs and a slotted spoon to transfer the pasta and peas to the skillet with the bacon. It is totally fine to splash water into the skillet; in fact, this is desirable. Return the skillet to the heat and crank it up to high. Pour in about 1/2 cup of the pasta cooking water and bring to a boil, stirring the pasta rapidly with tongs to form a sauce. Add additional pasta water, as needed, if the sauce is too tight. Remove from the heat and stir in about half of the cheese. Serve topped with the remaining cheese.