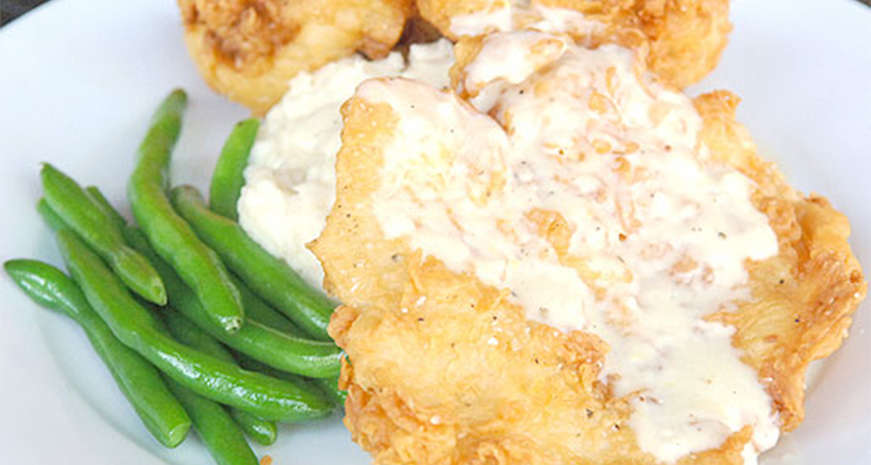 How to make Atkins Park Tavern’s fried chicken and gravy

Although there may be no dish as Southern as fried chicken, its roots begin elsewhere. The cooking style is actually both a Scottish and West African tradition, with Scots being the first to deep fry their chicken in fat. But while they did so without adding spices or herbs, West Africans combined the Scottish tradition with their own seasoning techniques. Introduced to the South through the institution of slavery, what we now know as fried chicken has come to be strongly associated with the region.

Sometimes, however, you need more than the traditional seasonings. Enter sawmill gravy, an addition that was reportedly invented around the time of the Great Depression when cornmeal was among the still-abundant products. These days, you’ll find plenty of recipes for sawmill gravy calling for flour, although some still use cornmeal as a thickener. The folklore says its coarse consistency is what prompted Depression-era lumberjacks to jokingly accuse cooks of substituting sawdust for cornmeal, which gave the gravy its name.

One Atlanta institution is especially famous for its fried chicken and gravy. Atkins Park Tavern, the city’s oldest licensed bar, began as a delicatessen in 1922 and remains a mainstay in the Virginia-Highland neighborhood. Of all the dishes they serve, none is more beloved than their unique spin on fried chicken.

Bone-in chicken is more commonly used in the South, but even skeptics will agree that Atkins Park’s boneless version can stand toe-to-toe with Grandma’s best. Its chicken bathes overnight in a buttermilk brine, which acts as a tenderizer and brings moisture to the bird. A simple but delicious salt-and-pepper mix is all the seasoning you will need.

Atkins Park makes its sawmill gravy with bacon grease and uses flour, not cornmeal, as a thickener. It is essentially a dairy-less béchamel sauce, one of the French “mother sauces” that gets its white color from blending milk with roux (flour and butter).

If you’re in either the Virginia-Highland area of Atlanta or Smyrna, Georgia, where Atkins Park Tavern launched a second location, make sure to drop by for its spin on one of the South’s time-tested favorites. The dish also makes a great homemade brunch entree on the weekend or anytime Southern comfort food is needed … which is literally anytime.

For the fried chicken:

For the sawmill gravy:

For the fried chicken:

Heat the vegetable oil in a fryer or heavy pan to 350 degrees. In a mixing bowl, combine the flour, salt and pepper. Into a separate bowl, pour about 1 cup buttermilk. Remove the chicken pieces from the soaking buttermilk (then discard this liquid) and shake off the excess. Roll each piece of chicken in flour, then dip it in fresh buttermilk to coat. Roll again in the flour to completely coat.

Fry the chicken in the hot oil for 10-15 minutes until brown and crispy on the outside and cooked through. Let the chicken rest on paper towels to absorb excess oil. Serve hot with sawmill gravy.

For the sawmill gravy:

In a small saucepan over medium heat, melt the bacon grease. Stir in the flour and cook, stirring regularly for 2-3 minutes. Slowly whisk in the milk and cook, whisking until mixture comes to a simmer and gravy thickens. Stir in the pepper and season to taste with salt. Add additional pepper if desired.