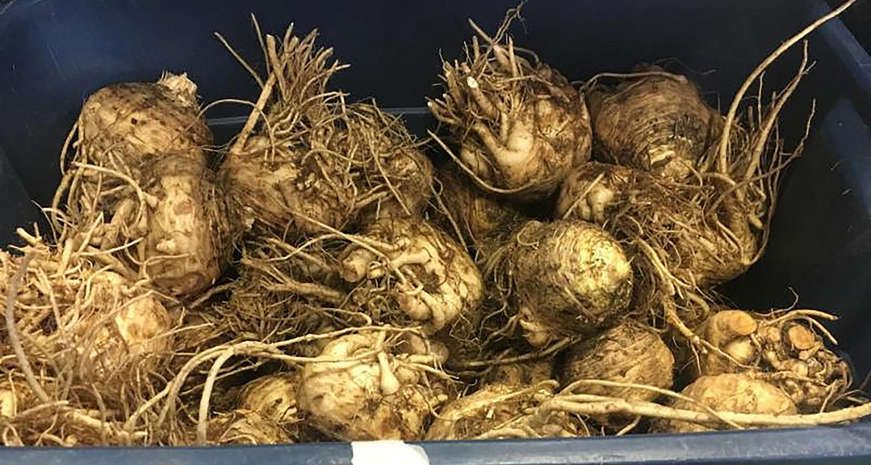 A bin of celeriac, also know as celery root, at a farmers market.

Beneath its mottled exterior, celeriac is a shining star of wintertime cooking

"The utility rating of celery is a clear 100 per cent, for every part of this all-year vegetable can be eaten."

These words by Louis P. de Gouy, from his 1947 "The Gold Cook Book," are true, but barely. I will cut him some slack because he was my first cooking teacher. And because celery does indeed offer every percent of year-round utility he promises. Alas, we don't in fact eat the roots of the celery plant. We could, but we don't. Even celeriac, which often goes by the name celery root, is not a root, but a swollen knob of stem called a hypocotyl.

A celeriac hypocotyl with its roots left untrimmed resembles the head of Medusa, writhing with snakes. Medusa, of course, is the ugliest thing in the world. Those snakey roots, covered as they are with scabby skin with dirt-packed wrinkles, are usually trimmed soon after harvest. At my local winter farmers market there is a vendor who brings a bin of untrimmed celeriac. I made a purchase, thinking wintry thoughts.

Once in my cozy kitchen, I stood like Perseus with Medusa's severed head in my grip, and pondered the fate of my prize.

One thing that I knew, beyond any doubt, was that I would not make celeriac puree. Nor celeriac soup, which is little more than overhydrated celeriac puree. No celeriac mash, either. There is too much flavor and crunch within that scabby knob to treat it like some russet potato. Raw celeriac is delicate and crunchy, with a quiet sweetness and verdant aroma. It's winter, after all, and we aren't flush with opportunities to eat food this fresh, with crisp, living flesh. Why kill it first?

If I had the time, and the recipe, not to mention a kitchen full of sous chefs, I would make the celeriac shawarma from NOMA. That famous Copenhagen restaurant's gyro-style spit of layered, slow-cooked celeriac slices was the toast of 2018 in the vegetable cuisine community.

If you aren't going to such heroic lengths, simply don't cook it at all. Cooking reduces celeriac to a faceless, personality-free vessel of starch. It becomes too sweet, with too much celery flavor and a cloying aroma. Even celeriac fries disappoint, as they are never crispy enough. 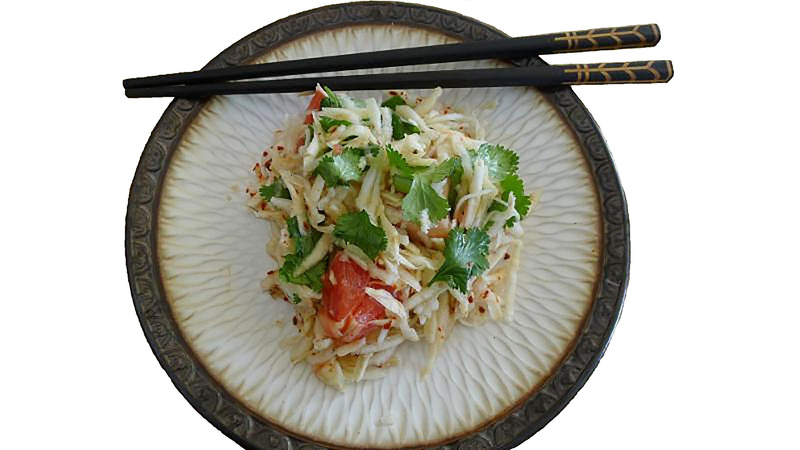 There is one singular, special, lonely case in which cooking celeriac is worth it: when you are making soup. Not celeriac soup, of course, but most any other type of soup will benefit from the quiet, behind-the-scenes magic of celeriac. Don't make a big deal about it. Just quietly use celeriac and let your guests wonder how you did it.

I have been known to use actual celery roots in the soup, after scrubbing their spindly tendrils clean. It's not like I had other plans for those dead serpents. Plus, using the true celery root validates the words of my old master. But remember: If you add too much celeriac and don't balance it with commensurate amounts of carrot and onion, it will swing the broth in a decidedly celer-esque direction.

There are many examples of salads where celeriac shares the stage with carrots, apples, turnips and other dense vegetables, getting lost in a sea of sweet, crunchy earth tones. But unlike in soup, where celeriac would be best advised to hang back, in salad it deserves a starring role, and needs little more than dressing and perhaps an antagonist, like protein. In the French classic celeri rémoulade, matchstick slices of raw celeriac are mixed with aioli — as formidable an antagonist as you will find. In the case of my Thai-style Celeriac and Grapefruit Salad, fish sauce and grapefruit provide the tension and backbone.

Grapefruit, which is also in season, adds a spectacular counterbalance of sharp, bitter sweetness to the other, more grounded ingredients, including that just barely above-ground celery knob. Peel the hypocotyl with a knife, then shred or mince the firm, lily-white flesh.

This is a fat-free salad. If that makes you feel naked, add a splash or two of spicy olive oil. It may not be authentic Thai, but it adds a lovely nuttiness.

Instructions
In a large bowl, combine the celeriac, grapefruit, cilantro and scallions. Stir in the lime juice and fish sauce. Mix well. Season to taste with pepper flakes and salt. Serve.