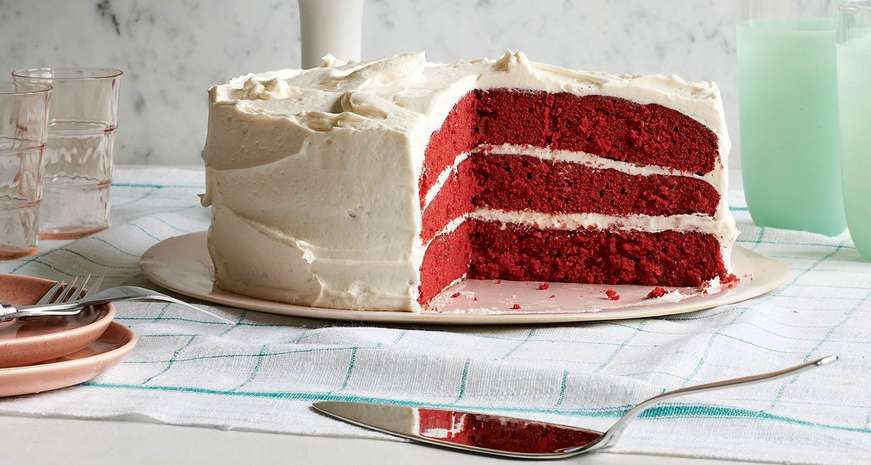 In this edition of her Taste of a Place column, author Anne Byrn talks red velvet cake and provides a recipe with great tips on how to make the famously decadent desert with a reputation for running away with our hearts.

Not that Americans hadn't been obsessed with red cake before that. Dyeing foods red started in the early 1800s using red fruit. In the Kentucky Housewife cookbook (published in 1839), there is a simple red food coloring recipe that uses the juice of ripe cherries and strawberries. By the late 1800s the Victorians tinted watermelon cake red to mimic the real fruit using cochineal, the crushed dried tropical beetle. That gave way to red food coloring in the 1920s, which continues to be the coloring of choice in red velvet cake today.

Maybe it's the eye-popping red color, but something about red velvet cake creates excitement on the plate and stirs discussion. From the name to the ingredients, to the place and time in which the first red velvet cake was born, historians and cooks have been mesmerized with it, and disagreed about its origin. Most believe it is a Depression-era cake born in Texas due to a shortage of cocoa. Others like the more glamorous tale of it starting in the kitchens of the Waldorf Astoria Hotel in New York.

Red Velvet in its Early Days
Back before cake flour, when wheat flour wasn't soft and refined, cooks would get downright creative trying to come up with a tender-textured cake. In the late 1800s, "velvet" was an adjective for fine-textured cakes and it implied they contained cornstarch or rice flour to create a softer texture. The "red" color was originally the chemical reaction between an acid (cocoa, buttermilk) and a base (baking soda), which combined to create a naturally reddish batter.

Hershey's shared a "demon cake" with such a color in 1934, and chocolate cakes with this coloring came to be known as "red velvet cake" by 1951. Throughout the 1950s, cakes baked with or without the red food coloring were called red velvet or "Waldorf red velvet." One such cake won the Maryland State Fair in 1960.

Down in Texas, red velvet cakes were and still are everywhere. The Lone Star State has always had a strong connection with the cake because of Austin-based Adams Extract company. It claims that it provided homemakers with the first red velvet cake recipe to use with its red coloring. And in my research for the book American Cake, I was in contact with Patricia Adam of Navasota, Texas, who remembered teaching school in 1960 in Port Arthur, and sampling one of the first red velvet cakes.

But using that much red food coloring is something that has always turned me off. I love the look and I like the taste, but I can't in a good conscience bake it often. And yet, for Valentine's Day, I make the exception. After all, what is Valentine's without the color red?

I chuckled when reading how the late Southern food historian John Egerton summed up the heavy use of red food coloring in this cake. "To me there seems no culinary reason why someone would dump that much food coloring into a cake," he said. Unless they were trying to sell you food coloring. Extract and food coloring companies like Adams have contributed much to the staying power of red velvet Cake. It has been a perennial American favorite, suitable at Fourth of July, birthdays, Christmas, and now Valentine's, thanks to their marketing efforts.

Baking a Special Valentine's Red Velvet Cake
Here is a recipe I adapted from the Adams Extract company and The New York Times.

The ingredients are straight-forward, and baking this cake is a lot like baking any other cake from scratch. You need butter and eggs at room temperature. The combination of the buttermilk, vinegar, and baking soda is an old-fashioned step, but it's part of the recipe. You could always forgo the food coloring and let the natural chemical reaction of the acidic and base ingredients determine the color of the cake, but then, you might be disappointed come Valentine's that it isn't red enough.

And as for the frosting, I am sharing a basic cream cheese frosting, not the classic Ermine — or cooked — frosting (if you want that recipe, you'll find it in American Cake).

Follow the directions as to skimming the coating, chilling and then completing the frosting of the cake. This creates a barrier which keeps your cake red and your frosting white. Otherwise, you will have a pink velvet cake on Valentine's. Enjoy!

Instructions
To make the cake: Place a rack in the center of the oven, and heat the oven to 350 degrees. Grease three 9-inch round cake pans with butter and dust with cocoa or flour. Shake out the excess cocoa.

Place the butter and sugar in a large bowl and beat with an electric mixer on medium speed until light and fluffy, about 3 minutes. Add the eggs, one at a time, beating well after each addition. Beat in the food coloring and vanilla.

Divide the batter between the pans and bake until the cakes just begin to pull away from the sides of the pan, 16 to 18 minutes. Let the cakes cool in their pans, set on a wire rack, for 10 minutes. Run a knife around the edges of the pans and give them a gentle shake to loosen the cake. Flip the cakes onto a plate and then back on to a rack to cool completely, top side-up.

While the cakes cool, make the frosting: Place the cream cheese and butter in a second large bowl, and beat with an electric mixer on low speed until combined, about 30 seconds. Beat in half of the powdered sugar and the salt. Beat in the vanilla and the remaining powdered sugar. Increase the mixer speed to medium and continue to beat the frosting until fluffy, about 1 minute more.

To assemble the cake, place one layer on a cake plate. Spread about 3/4 cup of the frosting evenly to the edges. Place a second layer on top and repeat. Place the third layer on top, and spread a thin layer of frosting on the sides and on top, making what is called a crumb coat. Refrigerate for 15 minutes to seal in the crumbs.

Generously frost the top and sides of the chilled cake with the remaining frosting. Slice and serve.