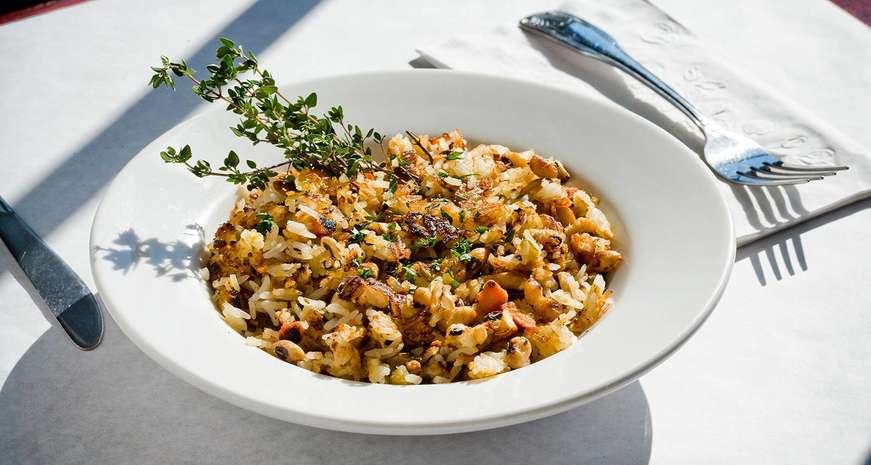 I’m gonna go on and make a prediction: Sometime in 2018, whether you’ve had it or chatted about it before or not, you will be talking about Gullah and Geechee food. And while it's certainly not new — Gullah Geechee might literally be the most not-new Southern food to ever exist — I believe the cuisine’s time to be fully appreciated has come.

The Gullah Geechee people can directly trace their lineage back to the first African-Americans to arrive in the U.S., during the transatlantic slave trade, from Sierra Leone and other West African countries. Theirs is a way of life developed over generations of living in isolated communities from North Carolina to Jacksonville, Florida, mostly in the Sea Islands and low country area of coastal Georgia and South Carolina. 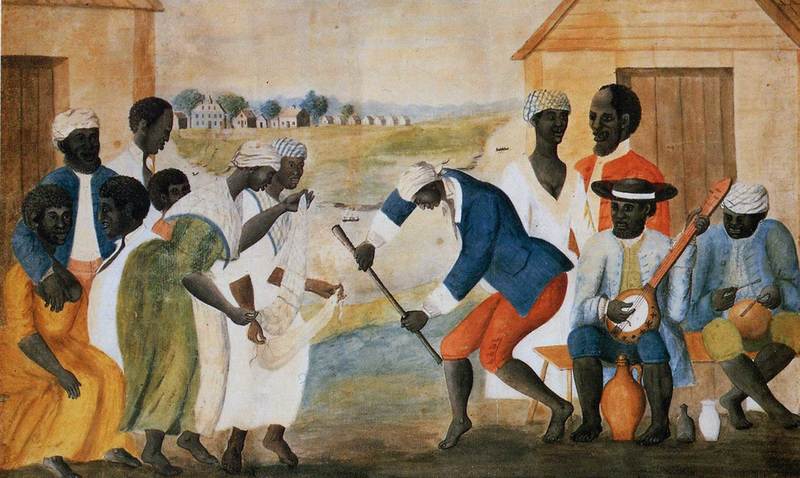 Because they stayed mostly to themselves rather than assimilate into wider Southern society, the Gullah Geechee people held onto unique customs and ways of living either lost, abandoned or forgotten outside the land where they are most concentrated today. This is due to migration of African-Americans around the country — voluntary or otherwise — and to the diaspora of African people throughout the world. And their culture not only includes fantastic food, but also the beautiful Gullah Geechee language: a Creole dialect that mixes English and African tongues.

Just as many other styles of Southern food have emerged and gained cult followings throughout the country, Gullah Geechee is primed for a takeover for several reasons. The first of those is that the food is soul-smackingly good. 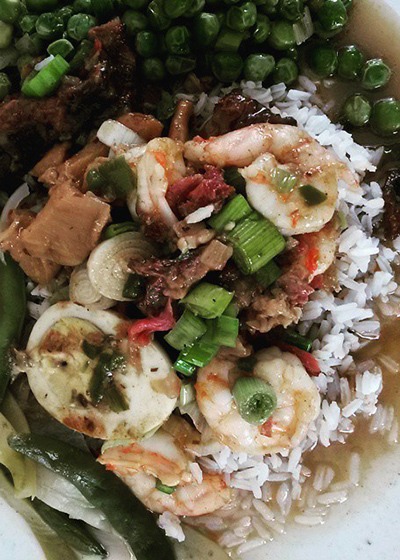 If you’re familiar with it, you know the grain-based cuisine’s worthiness and the depth of flavor found in its most popular dishes. Rice is a base ingredient, as the Gullah Geechee people are rice experts, having farmed and cultivated the crop for more than 3,000 years along Africa’s “Rice Coast.”

It's easy to find similarities between Gullah Geechee and the Creole cuisine of Louisiana and the Gulf Coast, but there are specific details that make it stand apart. The main dishes often include rice and seasonal local seafood, yet other grains like millet and benne seed are also used consistently. You’ll also notice the omnipresence of okra, tomatoes, braised vegetables and stewed greens. The results are dishes that are thick, hearty, savory and unmistakably Southern.

Another cool thing about Gullah Geechee food is that it doesn’t require silver spoons or fancy cutlery to be enjoyed. Because of the ways in which it is usually cooked, it's not always photogenic, but couldn't we use fewer ridiculous food selfies these days? Besides, the hallmark of good food is that it's made to be devoured, not cast in a Calvin Klein commercial.

But because of its history as a food created by and for enslaved people, there have always been ugly, stereotypical associations between Gullah Geechee food and lower-class citizenship, not to mention appropriation.

VICE News explored the community during a visit to St. Helena Island, South Carolina, where its correspondent Danny Gold spoke on camera with Marquetta Goodwine, also known as Queen Quet, Chieftess of the Gullah/Geechee Nation, and founder of the Gullah/Geechee Sea Island Coalition. Today, on the land where her great-great-grandfather was forced to work but eventually was able to legally purchase, she grows okra, peanuts, cantaloupe, watermelon and other foods that are automatically associated with the South.

When Gold remarked to Queen Quet that the island seemed isolated, she replied with a smile, saying, “That’s what we call ‘insulated.’ We feel like we’re insulated and kinda kept warmed and keep our culture alive away from the mainstream culture.” And she’s probably wise to be cautious, since the VICE video also reminds viewers that the resort area of Hilton Head, which was propped up on property that once was home to Gullah Geechee families, is spreading throughout the land. 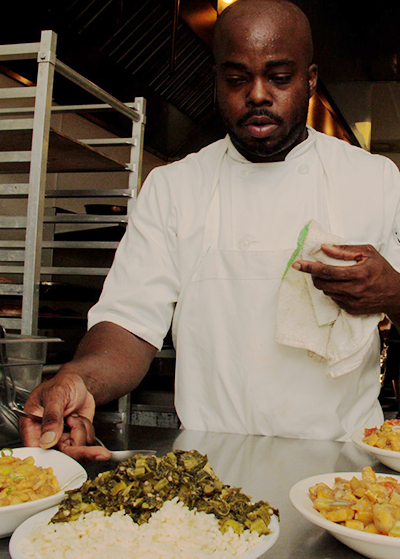 Probably the biggest name in Gullah and Geechee cuisine right now is Chef BJ Dennis, a Charleston native who has become sort of an ambassador. Dennis travels the country, and even ventures into the Hilton Head mainstream from time to time, cooking pop-up dinners for guests who’ve never experienced Gullah dining. He takes issue with the food being described as overcooked, and he reminds people frequently that it's a totally different world than fried chicken and macaroni and cheese, regardless of what you've heard or been served.

He has described Gullah cuisine as “a lot of the basis not only of South Carolina food, but Southern food, and the original food culture of the New World.” Still, Dennis has said he didn’t appreciate the food of his youth, prepared by his grandparents, until he traveled outside the country to another island and realized that it was something that deserved pride. "We don't embrace it like we should," he told Charleston City Paper in 2012. "It's almost a stigma."

Another reason the food has had trouble getting out to the rest of the world is the difficulty people have finding it. Sure, if you grew up in the area, your parents, neighbors and everyone else might have prepared okra soup (similar to gumbo, but using a tomato base instead of roux), winter greens and other standard dishes on a daily basis in their own kitchens. But the isolated and insulated nature of the community, along with hindered access to the food due to closures of beloved restaurants like Gullah Cuisine in the last decade, means that it just hasn’t been easy to find a bowl or plateful of authentic Gullah Geechee grub. And of course when there are products and places that borrow the name “Geechie” without being part of the culture or giving back to it, its identity becomes a little murky. 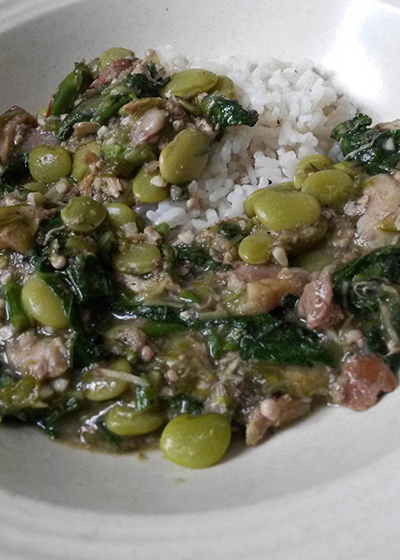 Fortunately, in the last 12 months, momentum has been rising to bring Gullah Geechee food and culture closer to visibility, which hopefully will open the door to more awareness and appreciation of Gullah Geechee cultural foods. For the past two years, the media has begun to shine more light on the brilliance of the people and what they've given America, and everybody’s finally noticing. And while there are concerns that the Gullah Geechee people are being pushed out of the land they’ve held for hundreds of years, and that cultural leaders are needed to step up in after the death of storytelling preservationist Cornelia Bailey, a new Gullah movement seems to be picking up steam.

South Carolina is embracing its Gullah Geechee heritage more than ever in the past year — a visitors center opened in Beaufort last April and a new restaurant called DaufusKEYS Gullah Bistro and Piano Bar is now up and running Columbia. The Weather Channel recently called attention to the damage that climate change is having on Gullah Geechee lands. Also, the Charleston Gullah band Ranky Tanky just hit the top of Billboard magazine’s jazz charts with its self-titled debut album of traditional and spiritual songs. Even Harvard is in; it launched a class on Gullah language this past fall and is now offering it for a second semester.

Imagine what’s going to happen as more people visiting Charleston start venturing just outside the city to sample beloved dishes like garlic crab or shrimp at Ravenel Seafood. Or when they discover one-pot Gullah Geechee meals like purloo and realize how much the dish has influenced more familiar foods like country captain and chicken bog. Or, as BJ Dennis said in an excellent Eater story on Gullah cuisine’s past, present and future, when Charleston diners start finding more Gullah cuisine on restaurant menus, they'll also start to see more Gullah restaurant owners.

In today’s society, many people are taking a second look at our surroundings and wondering anew what it means to be American. The Gullah Geechee community is certainly an African-American group, but their story is as American as anyone else’s, if not more. As we all continue to try new things and become more aware of the spectrum of societal fabric that has been woven by Southern food, we’ll realize how invaluable these traditions are, and how they redefine the accepted meaning of words like “heritage.”

And all that said, I have faith that the Gullah Geechee people are going to get all the good coming to them, which is the recognition, respect and revenue deserved for sharing their traditions in a world where the only constant is change. And to me, that’s all the more reason to celebrate their culture and join them for a one-pot dinner.