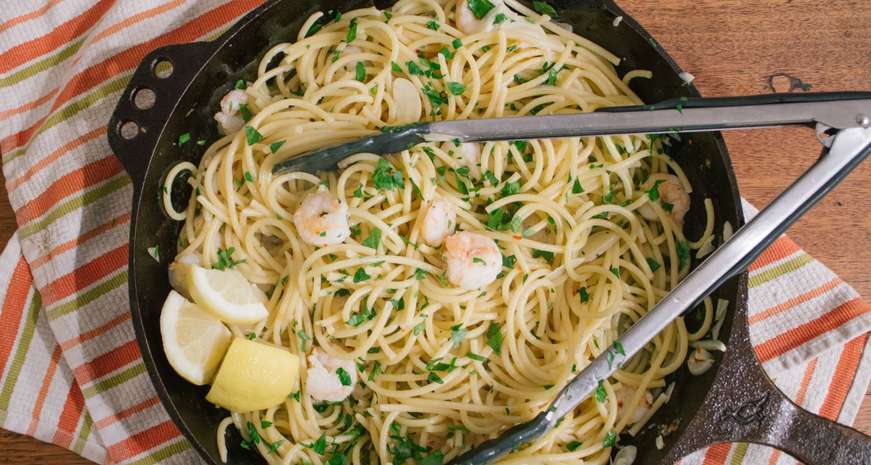 Does cast iron really cook better than your other pans?

Don't tell Southern Kitchen's chief merchant Sean Pruett, but I'm a stainless steel gal. Yes, I've got a few cast iron skillets in my kitchen, but they mostly just sit in my cabinet.

I can write about why cast iron is great all day, but I'm going to be honest: I love the look of cast iron, and I love the idea of cast iron, but the thought of having to spend any time thinking of how to care for cast iron makes me turn to my precious stainless steel every time.

In an effort to broaden my horizons, I was tasked with cooking a week's worth of meals exclusively in cast iron. This "week" ended up stretching over the holidays, so what you'll see below is more a collection of dishes I cooked when I wasn't celebrating Christmas or New Year's. Here's what happened:

Cornbread
Over the holidays, I hosted several of my childhood friends for a White Elephant party. Many of them are vegetarian or have other dietary restrictions, so I cooked up a big pot of veggie chili for the group. Alongside, I decided to make cornbread in my skillet. This was an easy decision, as cornbread and cast iron go together like milk and cookies.

Because I had gluten-free diners, I made a traditional Southern flour-free cornbread, the batter of which I poured into the pre-heated skillet filled with hot butter. It didn't take long to bake through and turn golden brown and delicious. The ultra-crisp and brown butter-coated crust was the highlight — really, no surprise there.

Grade: A+
Is there a better use for a cast iron skillet? I think not. So far, so good. 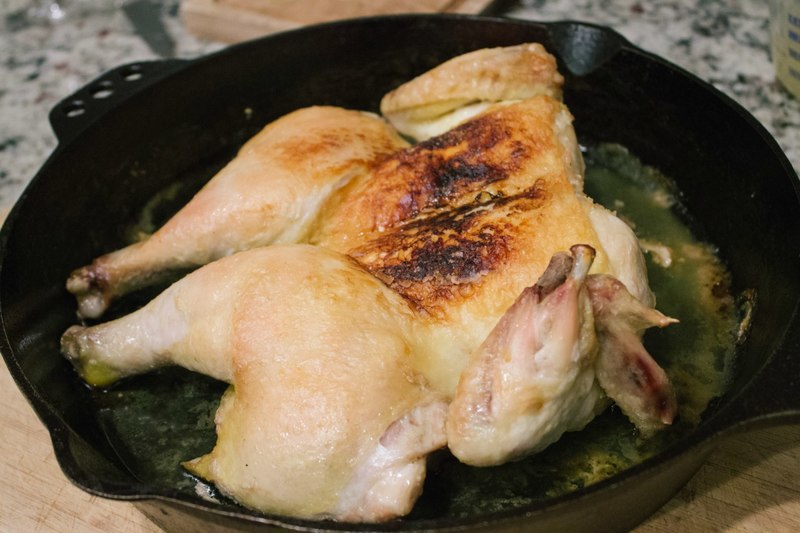 Chicken under a Brick with Sautéed Kale
One of my go-to weeknight recipes is butterflied (or spatchcocked) roast chicken. It cooks relatively quickly, makes great leftovers, and you really don't need to do much to a roast chicken to make it taste good. And while I usually make it on a baking sheet, I figured this would be a great place to use my skillet.

To really highlight the skin-crisping properties of cast iron, I decided to modify my usual method of just popping the chicken in a super hot oven by smashing it under a "brick." This technique, for the uninitiated, calls for starting the chicken on the stove, on a ripping-hot skillet, skin-side down. You press the chicken firmly into the skillet with a brick (or, in my case, a second cast iron skillet), and then transfer it to the oven. The chicken cooks, smushed under the skillet, for 15 minutes or so, and then is flipped over to finish cooking skin side-up. The result, if you do it right, is deeply browned skin, a crisp crust, easy to carve meat and (bonus!) plenty of browned pan drippings for making a sauce and/or a sautéed side.

As you can probably tell in the photo, my chicken was slightly too big to get a good hard sear on all of the skin. It fit in the skillet — barely — but only the breast got the full effect of the "brick." The good news? It still tasted great and was ready to eat in less than an hour. Plus the kale I sautéed in the drippings was full of great schmaltzy flavor. (P.S. You can find the recipe at the bottom of this page.)

Grade: B+
A smaller chicken would have brought this dish into A-level territory.

Chicken Pot Pie
In my house, I'm most often just cooking for two, so a whole roast chicken always leaves plenty of leftovers. What better way to make use of last night's dinner than to make a pot pie with the flavorful chicken meat?

I sauteed up some leeks in butter in the skillet and added a few diced carrots and chopped garlic to the mix. Flour and chicken stock made for a good saucy base, and then in went the leftover chicken, plus some roasted potatoes from another meal. I topped the stew with big dollops of buttermilk biscuit dough, because when don't biscuits make a dish better? A hot oven and another 20 minutes were all it took to bring this ultra-quick one-dish dinner together.

The finished pot pie was excellent, especially the ultra-crisp sides of the biscuits that touched the skillet. (Crisp edge fans, raise your hand!). And the leftovers (there are always leftovers) stayed warm in the hot cast iron long after we were finished with our dinner. If you're making pot pie for a pot luck or any other function, any cast iron skillet will make it easy to bake, transport and serve, without worrying about the dish getting cold.

Grade: A
There's really no reason not to cook chicken pot pie in cast iron because its stove-to-oven-to-table functionality reduces pots and pans and, frankly, the pan itself looks great as a piece of serveware. Of course, you could also do the same trick with stainless steel, but it wouldn't look as pretty, now would it?

Shrimp Scampi Pasta
Another easy weeknight dish that I love to make year-round is a simple, buttery pasta recipe inspired by shrimp scampi. I thought this dish would be a great way to test out the skillet's searing abilities with seafood — and to see if that shrimp flavor would infuse into the skillet, which is not really what you want unless you're eating shrimp every single day. There's not much to this recipe: All you need to do is slice up a head of garlic and cook it slowly in a stick (or more!) of butter to infuse its flavor into the fat. Sear off the shrimp in some of that garlic butter, and then toss in cooked pasta, more garlic butter, and some pasta cooking water. Lemon juice, parsley and red pepper flakes add balance to the rich, buttery sauce.

While this dish never really goes wrong (nothing is ever wrong with all that butter), my desire to get dinner on the table quickly made the dish suffer a bit. I didn't pat the shrimp quite dry enough before searing, so they didn't get as deep, golden crust as they should have. Some stuck, and some overcooked, but it was made all the better with, of course, that sauce. So we ate it anyway.

Grade: B-
The errors here were mine and probably not the skillet's, but this dish certainly could have been better. And the clean up required a bit of elbow grease, but, fortunately, no lingering shrimpiness. 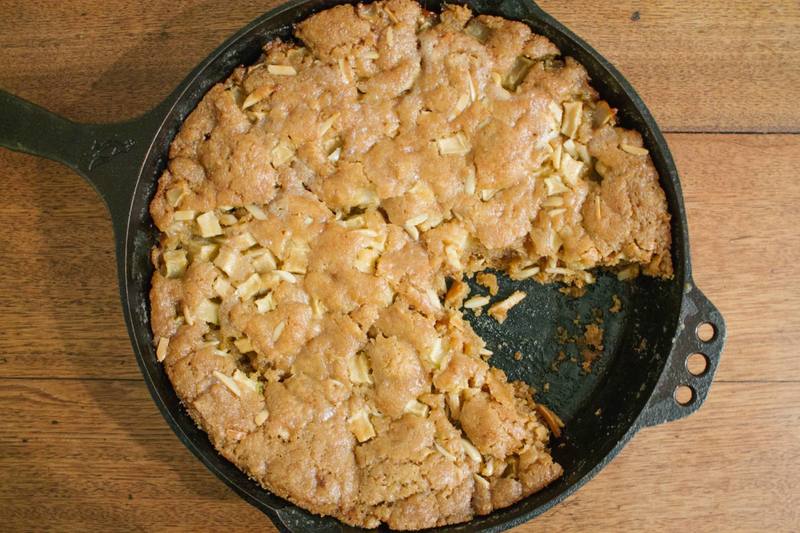 Nama's Apple Cake
For my final skillet dish, I went even more in the comfort food direction by baking up a cast iron skillet version of Nama's Apple Cake. Most cakes actually bake beautifully in cast iron, as long as you like crisp edges (this is a theme), and dense, oil-based cakes like this one are some of the best.

I followed my recipe almost to the letter, although it did need to bake about 10 minutes longer than in the original recipe — a 12-inch skillet is about the same volume as a 9-by-13-inch pan, but it is narrower and deeper, which results in a thicker cake. I also ended up substituting about 1 cup of cornmeal for flour because, well, I ran out of flour. The good news is that cornmeal is a wonderful addition to the recipe.

The great news is that this apple cake is even better when baked in cast iron. In the final step, when I poured the caramel sauce over the hot cake, it hit the sides of the skillet and sizzled, bubbled and caramelized even more to create a crackling, crunchy and bittersweet edge that completely blew my socks off. 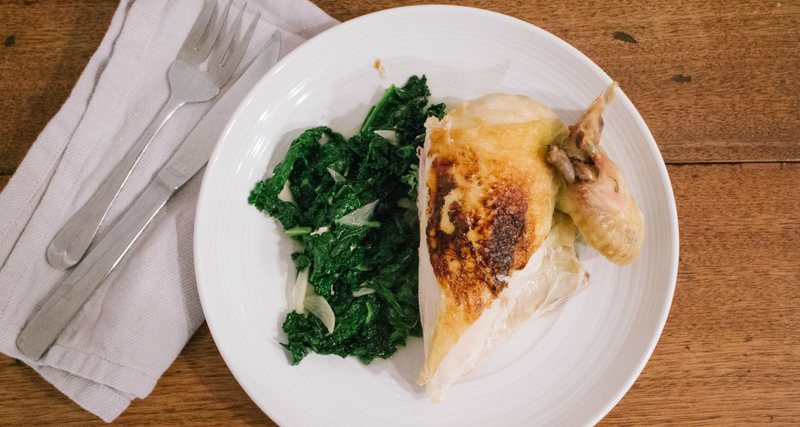 Roast Chicken Under a Brick with Kale
Note: If you're in a hurry, you can skip the initial resting time after salting the chicken.

Instructions
Using heavy-duty kitchen shears, cut the backbone from the chicken. Snip the breast bone, and then flip the chicken so it is skin side-up on a cutting board. Press down firmly on the breast to press the chicken flat. Twist the wing tips behind the breasts to secure. Using paper towels, pat the chicken very dry and place on a wire rack on a rimmed baking sheet. Rub 2 tablespoons of the salt all over the skin and underside of the chicken. Let sit at room temperature, skin side-up, for 45 minutes.

When you're ready to roast the chicken, heat the oven to 475 degrees. Wrap the bottom of a heavy skillet or Dutch oven with aluminum foil.

Place a large cast iron skillet over medium-high heat. Let heat for 5 minutes. Place the chicken, skin side-down, in the hot skillet. Place the foil-lined skillet on top of the chicken and press firmly to flatten the chicken into the skillet. Let cook until the skin begins to brown, 2 to 3 minutes.

While the chicken is resting, carefully pour the drippings in the pan into a small bowl. Skim off about 1 tablespoon of fat from the drippings and place in the hot skillet. Discard any additional fat in the bowl, reserving any juices.

Carve the chicken and serve with the kale.

Been neglecting your cast iron skillet?

Been neglecting your cast iron skillet?