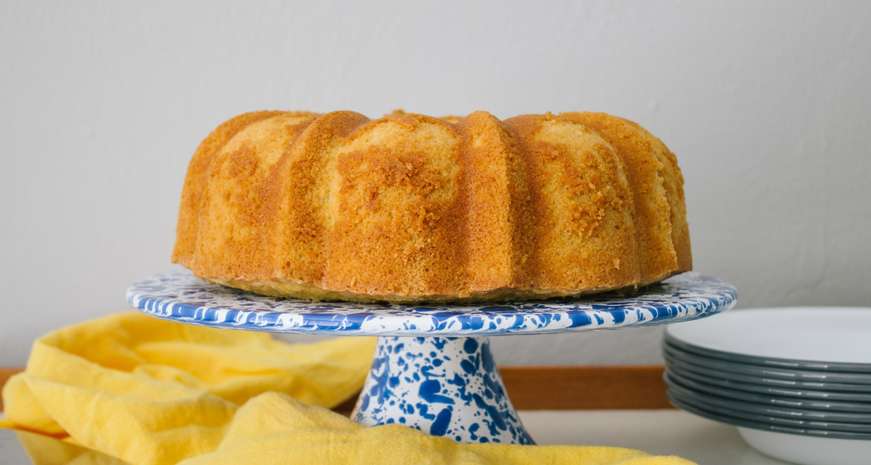 You know a cake recipe is going to be good when it starts with directions to cream a pound of butter. Yes, sugar and flour and eggs are all great, too, but — really — who doesn't love a cake that is first and foremost all about the butter?

I can't even keep track of the number of pound cake recipes that shy away from such things. I've seen recipes calling for a meager 14 tablespoons or an only slightly more generous two sticks, but those that fully embrace the history (and simplicity) of the recipe are surprisingly few and far between. And sure, there's likely some science, and a few tricks, behind lower butter amounts, but come on. It's called a pound cake for a reason.

POUND CAKE – One pound sugar, one pound butter, one pound flour, ten eggs, rose water one gill, spices to our taste; watch it well, it will bake in a slow oven in 15 minutes.

POUND CAKE – Work three quarters of a pound butter, one pound of good sugar, till very white, whip ten whites to a foam, add the yolks and beat together, add one spoon rose water, two of brandy, and put the whole to one and a quarter of a pound flour, if yet to soft add flour and bake slowly.

An 1824 version of the cake, more similar to Simmons' first variation, was published in Mary Randolf's The Virgina Housewife, but the second version, with egg whites, didn't seem to appear again until 1881, when Abby Fisher published What Mrs. Fisher Knows About Old Southern Cooking.

There, Fisher, who was enslaved in South Carolina before becoming one of the first published African-American chefs, describes two pound cakes, one "gold" and one "silver," and both leavened with a combination of whipped egg whites and "the best yeast powder." Adding egg whites and yeast made pound cakes far more foolproof, as the most traditional recipes are risen only by the mechanical process of properly creamed butter and sugar, a feat that was much more challenging before the advent of household electric mixers in the early 20th century. Just imagine beating a pound of butter into something light and fluffy using only a wooden spoon. 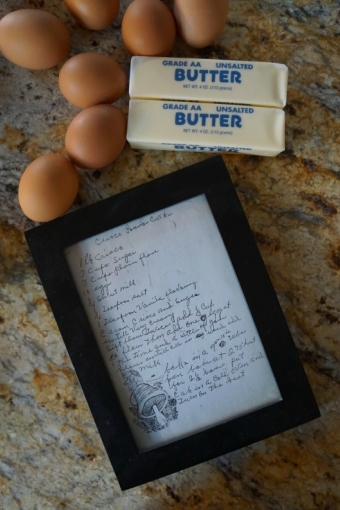 Once those mixers came into common use, it made creaming the butter and sugar a breeze, and made it possible for even the least experienced baker to turn out a successfully risen poundcake. Anyone could bring together the dead-simple combination of butter, flour, sugar and eggs, and create a delicious cake.

Southern Kitchen reader Joe Roy Pendarvis grew up eating his great grandmother Susie Bryant's pound cake. He wrote on his blog, Bayou Boston, that "she was a hard worker and a Southern cook, not by choice, but by necessity." Bryant was a vegetable and tobacco farmer in Sampson County, North Carolina and she, Pendarvis said, "could work us all under the table, and she only had one leg."

Really, that fact is all I needed in order to understand she was likely a no-nonsense kind of lady who cooked and baked with what she had. Her pound cake recipe is written using Crisco instead of butter, likely a result of mid-20th century preferences and easily affordable resources. Otherwise, her recipe is very typical, with only the addition of a bit of vanilla for flavoring and "sweet milk" for its tenderizing effects.

Over time, Pendarvis has adapted his great-grandmother's recipe, adding back the butter and swapping in half and half (or egg nog!) for the sweet milk. He also likes to dribble in a couple tablespoons of peach brandy for a little bit more decadence. But the techniques — starting in a cold oven, beating in the eggs slowly, and cooking the cake low and slow — remain the same. They're tried and true, and they produce a cake that is dense and buttery in the best kind of way: a real-deal poundcake that stands the test of time. 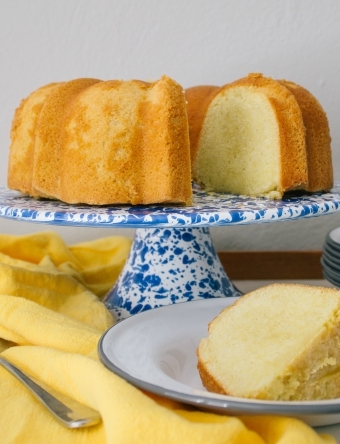 Instructions
Generously butter a bundt or Marianne pan, or use nonstick oil spray to generously grease the pan.

In a stand mixer fitted with the paddle attachment, or using an electric mixer, cream together the butter and sugar on medium speed until light and fluffy, 3 to 5 minutes. Beat in the brandy, if using, and the vanilla and salt until combined.

Reduce the speed to low and mix in 1/2 cup of the flour. Mix in two of the eggs. Continue to mix in the flour and eggs in the same amounts until completely incorporated. Mix in the half and half. Pour the batter evenly into the pan. Bang the pan on the counter several times to release any air bubbles.

Place the pan on the center rack of a cold oven and turn the heat to 275 degrees. Bake until the cake edges are golden brown and a toothpick inserted deep into the center of the cake comes out clean, 2 to 2 1/2 hours.

Let the cake cool in the pan for 10 minutes before turning it out onto a wire rack to cool completely. Serve.