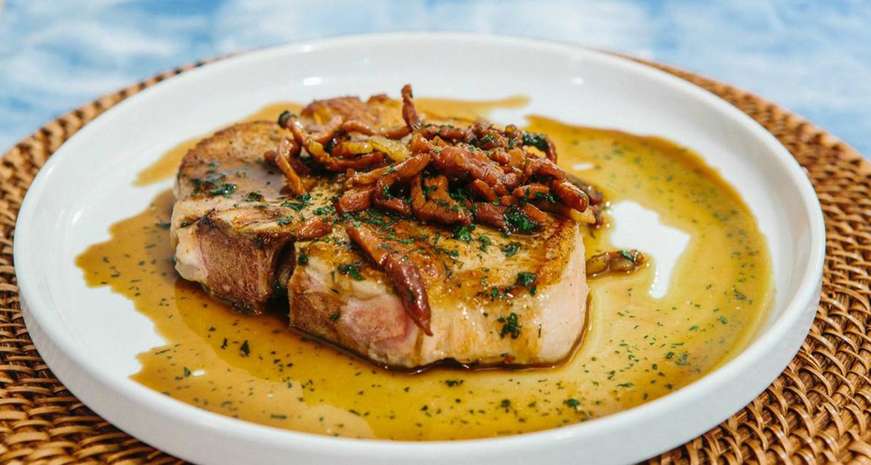 It's gonna be hard to have a happy new year if you walk into January with a plate-full of bad luck. Read below to make sure your New Year's Day dinner puts you in position for a prosperous 2018, or at least make sure you don't eat anything that'll cause you to jinx yourself.

All around the world, people have long believed in the power of food to boost their fortunes for the next 12 months. If you were raised in the South, you know we take it very seriously, and you've probably heard the phrase, “Peas for pennies, greens for dollars and cornbread for gold.” Maybe it's real and maybe it's a big pot of mumbo-jumbo-gumbo, but there are certainly worse ways to start a new year besides putting warm, delicious food in your stomach, whether you believe in good luck or don't.

Fill up a plate of good fortune, or at least help carry on Southern tradition, by eating these classic, generationally recommended Southern foods. And stay away from chicken, turkey and a few other things — I'll explain below.

Pork
When pigs roam around looking for food, they “root forward” with their snouts. This symbolizes progress and moving ahead in life, which is the goal, right? Also, pigs aren’t known for their skinniness; by enjoying the rich, fatty, flavorful meat you’re setting yourself up for prosperity and abundance. So if a friend or loved one remarks about any winter weight you may have picked up, you can tell them that even Wall Street Northerners know to invest in pork belly futures.
Recipe: Cast-Iron Pork Chop with Red-Eye Gravy 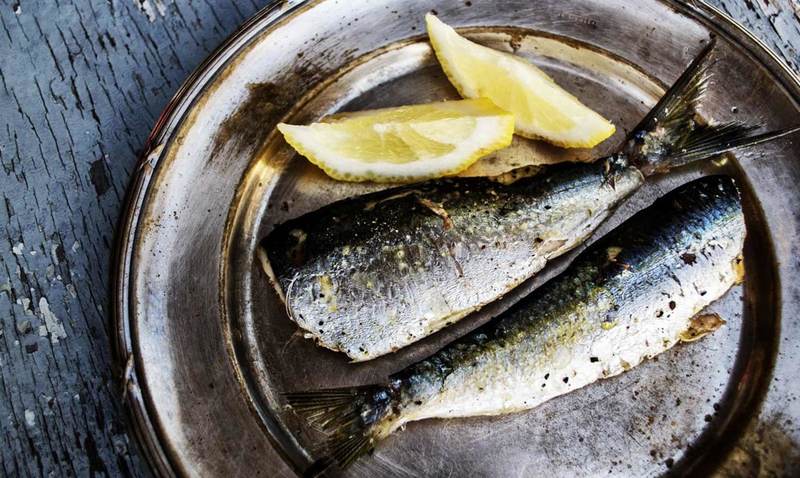 If you like dinner with fins, you really are in ... luck! As long as it swims forward, that fish on your dish should help fulfill your biggest 2018 wish. And since the South is more multicultural than ever, consider incorporating a little food culture from around the globe to up the ante even higher. In China, for instance, a whole fish is thought to bring good luck (especially for whoever gets the head, which is the most flavorful part), and German and Polish people are known to enjoy pickled herring — not only for the flavor but also because the scales are very shiny. If all else fails, you should certainly be able to find a nice filet of trout or bass somewhere in the South.
Recipe: Pan-Roasted Fish with Herb Compound Butter 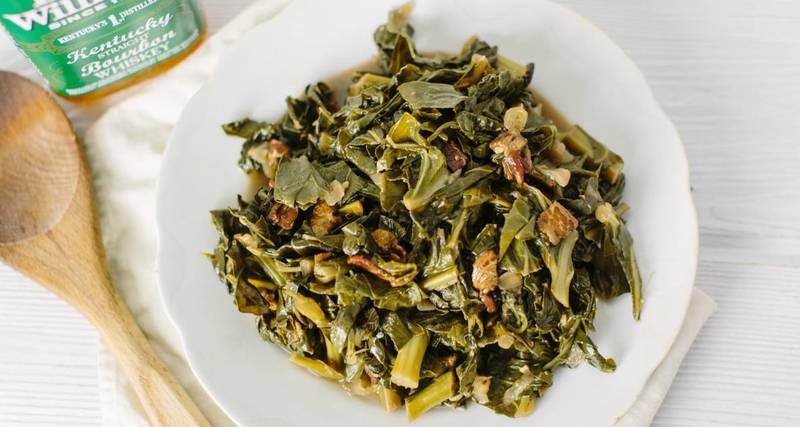 If you’re interested in making the kind of money that folds or has to be bagged in 2018, go ahead and fix up a pot of greens for your first dinner of the year. Their flatness and color represent the mighty dollar bill, and you could even triple your earning potential by including any or all of the Southern greens standards. After all, there’s no evidence that collard greens, turnip greens or mustard greens are better or worse, other than kale, which is soooo 2015.
Recipe: Bourbon Collard Greens 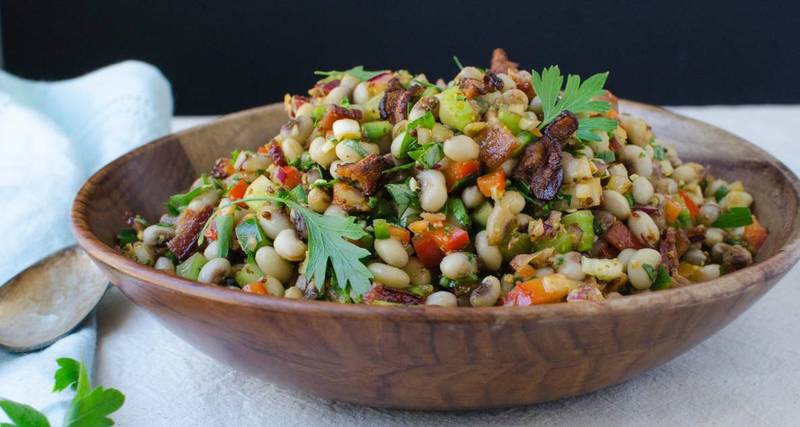 There are all sorts of historical reasons why black-eyed peas are considered to offer blessings, starting with the fact that they symbolize money in the form of coins. The beans, native to Africa, first arrived in America through the South, due to the slave trade. African-Americans have long associated them with a hopeful new year due to the Emancipation Proclamation, which took effect in 10 Southern states on January 1, 1863. It's also said by Civil War historians that black-eyed peas were spared by Union soldiers during Sherman’s March, helping Confederate soldiers survive. So whatever your Southern heritage, we can all agree that black-eyed peas should be celebrated and eaten.
Recipe: Hoppin’ John Rice Fritters with Collard Green Pesto 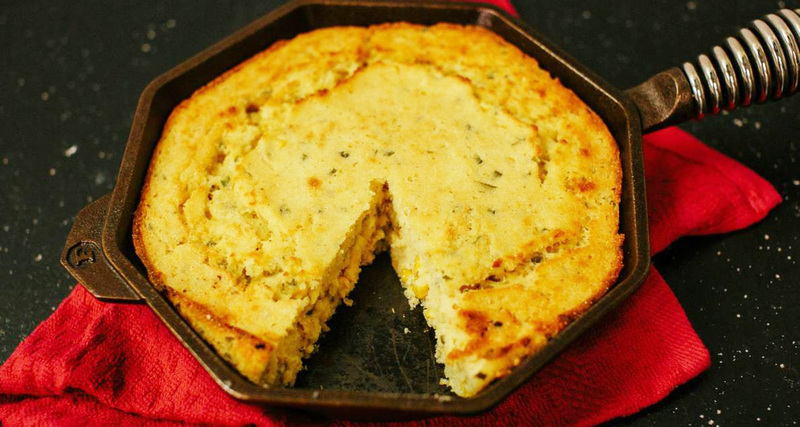 Is there ever a case for not eating cornbread? The answer is no, and it’s especially a ridiculous idea to forget to put cornbread on your New Year’s Day plate when you consider that it represents gold. Sure, gold may no longer be the standard to which the U.S. dollar is tied, but it’s still a precious metal that people put lots of money into, whether in heavy bars because of stock market scares, or brilliant charm bracelets and other jewelry. And sure, we know that everyone is spending the final weeks of 2017 going Bitcoin-crazy, but we’d rather put our faith into something you can actually bite.
Recipe: Classic Southern Cornbread 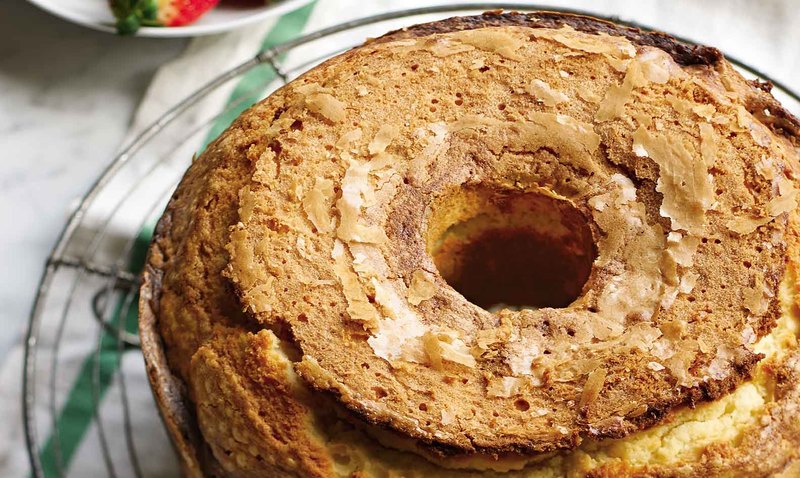 Our planet and everything on it revolves around the sun every year. Show appreciation for coming full-circle since 2017 by eating a slice of ring-shaped cake on the year’s first day. It’s sweet, loopy and full of good cheer, similar to how many of us act on New Year’s Eve after a glass or two of bubbly.
Recipe: Leah Chase’s Butter Cake

What to avoid: Catfish, crab, lobster, and poultry
For the opposite reason you’d eat pork — chickens and turkeys scratch the ground backwards when looking for food — you’re not supposed to have any yardbird on your fork, and yes, that includes wings (sadly), because apparently they’ll encourage the possibility of good luck to fly away.

Also, lay off the bottom-feeding scavenger fish on NYD; it’s kind of a bad statement about how you’ll survive over the next four seasons. And as much as we Southerners love crab and lobster, both crustaceans move sideways, and sometimes backward, rather than straight ahead. So maybe enjoy a dinner of freshly cracked shellfish on New Year’s Eve instead? Just make sure you’re finished munching by 11:59.

And finally, don't keep all the good luck to yourself; share these recipes with your friends and family to help them have the best 2018 ever. Happy New Year!