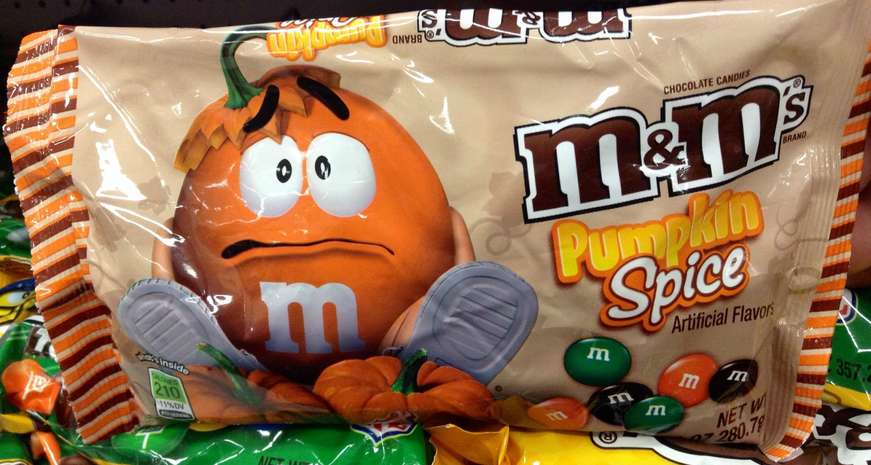 We feel you, pumpkin spice M&Ms

This week, op-ed columnist Frank Bruni of the New York Times penned the story, "Will Pumpkin Spice Destroy Us All?" The title, while perhaps hypberbolic, more than hints at the ways in which our obsession with this fall flavor aligns with our political and cultural milieu. Calling the flavoring "invention run amok, marketing gone mad ... the transformation of an illusion," he writes: "One day we’re still catching the faint perfume of Coppertone on summer-bronzed arms; the next we’re trapped, aromatically speaking, inside an enormous orange gourd. It happens that quickly, that insidiously: a zombie apocalypse, if the zombies wore nutmeg cologne. And it really must stop. But it won’t. It can’t. I finally realize that, because at last I see that pumpkin spice is more than a curiosity, bigger than a phenomenon. Pumpkin spice is America."

It's a strong statment, and one that has been echoed in other media outlets: In September, the Washington Post's Maura Judkis sampled every pumpkin spice product she could find, and determined that "it is possible to spend an entire day subsisting off nothing but pumpkin-spice products." She finally hit her pumpkin-spice wall with organic (!) spray-on pumpkin spice flavoring that "tastes like you squirted an air freshener directly into your mouth" and that she says she'll keep in her purse to use it as mace.

Both Mother Jones and Eater are chronicling the best (worst?) of this year's pumpkin spice releases. Stand-out items, among around 65 in total, include pumpkin spice bar soap (don't worry; it's "all-natural"), pumpkin spice deodorant, pumpkin spice kale chips and, for the college student in all of us, pumpkin spice instant Jello shot mix.

I wish...I wish for a guitar. And four more months of fall. And a roller skate. Oh, and one of those standing desks...#HBD2ME pic.twitter.com/RM9OsZZruZ

Hard-core pumpkin spice fans likely follow @TheRealPSL, the Twitter handle created by Starbucks, which constantly posts images of a latte outfitted with sunglasses sitting in various fall-ish scenes. Is this as unnecessary as pumpkin spice protein powder? You tell us.

Pumpkin spice, beyond pies and lattes

Pumpkin spice, beyond pies and lattes