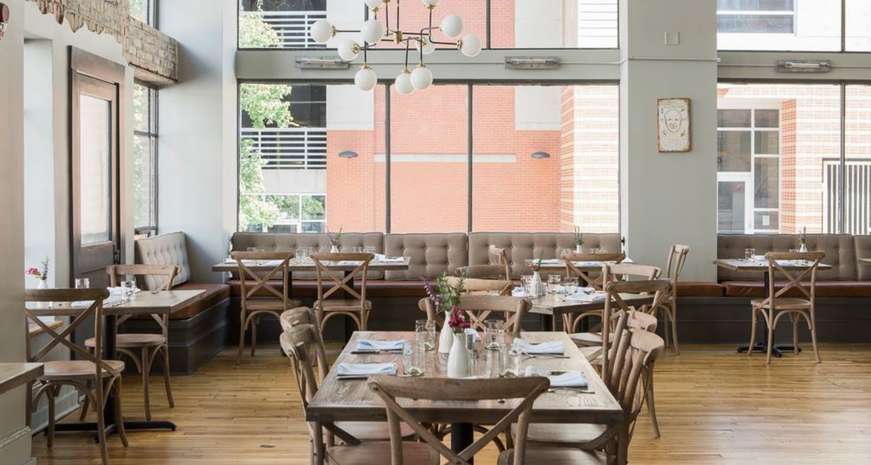 Situated at the foothills of Tennessee’s Great Smoky Mountains is one of the South’s best kept secrets. Often overshadowed by Memphis and Nashville, Knoxville is a small city filled with charm in unexpected ways.

The restaurant scene is up and coming, and there are plenty of chefs working to elevate the city's cuisine. We've spoken with five of the chefs changing the game in new and exciting ways. 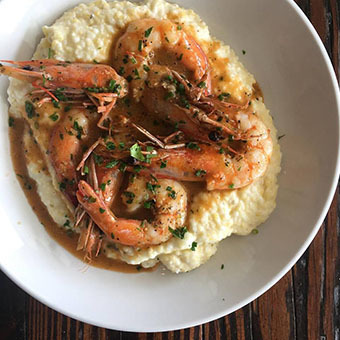 After working in kitchens in his native Tennessee and across the sea in New Zealand, chef Drew McDonald came back home to open his own restaurant. Along with his wife and a lot of blood, sweat and dedication, their dream came true. Seven years later, The Plaid Apron is one of the best places in town to experience “farm-to-mouth cuisine.” (McDonald doesn’t particularly like the term “farm-to-table,” as he thinks it’s overused and been blown out of proportion.) But McDonald’s cooking truly brings local Tennessean products to the consumer. He sources his pigs from a hobby farmer who raises them only six miles from the restaurant, and he stretches each one as far as he can using every single part of the pig. 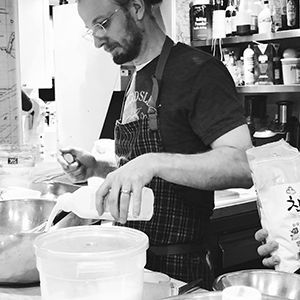 You’ll find some protein on the plate, but he focuses mainly on veggie-centric dishes. “Our responsibility is to make the customers eat healthier with great well-proportioned dishes,” he said.

The relationships McDonald has built with local farms and farmers show the great sense of community that Knoxville is built on. Restaurants rely on farmers and farmers rely on restaurants. Sustainability is always on his mind. Whether he’s picking up produce at the farmers market or sourcing fish from fishermen on the Gulf Coast, McDonald makes a conscious effort to know where every ingredient comes from.

The Plaid Apron, which underwent a renovation last year, was one of the first chef-driven restaurants to set up shop in Knoxville. When it opened seven years ago, the Knoxville restaurant scene was slowly starting to move forward. McDonald has seen some change in the growth of the dining scene, but still thinks there’s room for improvement and hopes his cooking continues to push that growth. “To me, Knoxville is a grits and gravy town, but it’s moving away from being just that,” he said.

As for his culinary dreams, McDonald hopes to open a bakery and fine dining restaurant in the future. “Not to toot my own horn, but I think we're one of the best restaurants in town,” he said. “I’m more confident about our food than I ever have been before.” 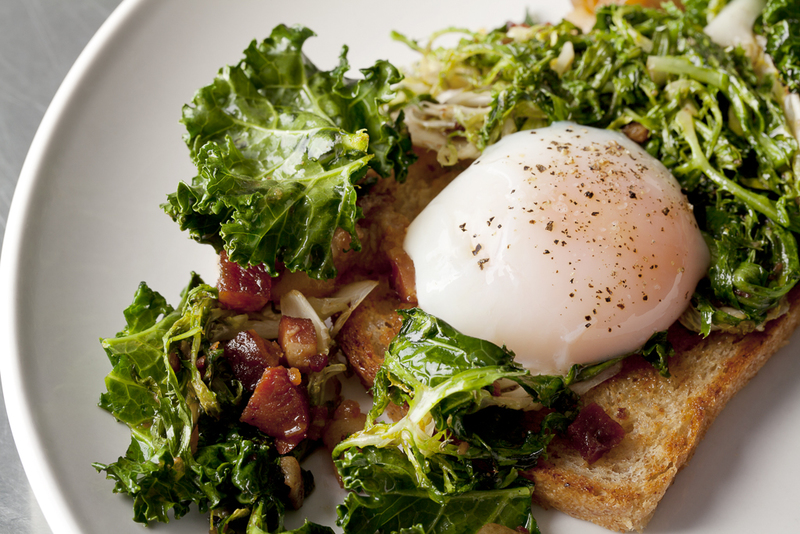 Matt Gallaher, Knox Mason and Emilia
Native Tennessean Matt Gallaher began his culinary journey at a young age. His mother cooked using produce from their family farm and when he would visit his father in Chicago he got a taste of many different cuisines including Greek and Sichuan food. “[Trying] all of these neat different cuisines at a very early age encouraged us to be adventurous so I’ve never been a picky eater,” Gallaher said. “That exposure to different, but meaningful culinary scenes from home cooking and stuff we grew to going out to eat ethnic food kind of helped form who I am as a chef.” 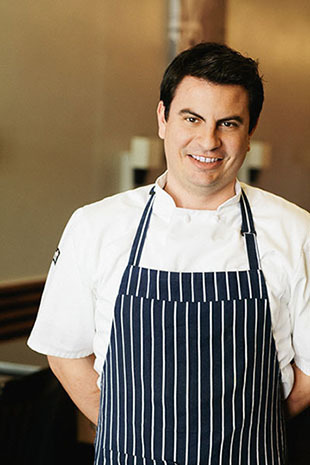 After deciding a career in chemical engineering wasn’t going to be a fulfilling career, he dedicated himself to the culinary world. His career took him to East Tennessee’s Blackberry Farm, and on the road as a chef catering to musical stars, like Sugarland and Keith Urban. Before settling back down in Knoxville, Gallaher toured the world while serving as the personal chef for Kings of Leon. Gallaher came back to Knoxville to serve as personal chef to Governor Bill Haslam for two years before opening up his first restaurant, Knox Mason.

Gallaher’s goal for his restaurant was to introduce a chef-driven restaurant to downtown Knoxville. At Knox Mason, the menu is focused on approachable Southern food made from local ingredients grown on Tennessee farms. The restaurant recently celebrated its fifth anniversary and will be moving into a larger space in Knoxville’s Embassy Suites in 2019, giving the restaurant a chance to expand and allow the staff to spread their legs a little bit.

After seeing the success at Knox Mason, Gallaher wanted to open another restaurant, but wasn’t exactly sure what direction he wanted to go in. “I thought what we were lacking downtown was just ... simple homemade Italian food,” he said. So that’s the direction he headed, and Emilia was born.

The decision to name the restaurant did not come easy. “I bought over 60 Italian cook books and just read as much as I could to really educate myself on Italian food. Over and over again in these books Emilia-Romagna kept coming up as basically the birthplace of all the ingredients, [like] Parmesan, Pecorino, prosciutto, mortadella,” Gallaher said. “All of these iconic Italian foods are coming from this small region in Italy, and that’s kind of the philosophy we had at Knox Mason.” He applied the same philosophy at Emilia with everything made from scratch.

“Emilia-Romagna was turning over in my head because that’s the birthplace of all these great ingredients,” he said. “And then I realized my grandmother and sister are both named Emily, so I kind of thought the idea of 'Emilia' as a way of bridging the Southern hospitality my mother always showed us and the cuisine of Italy. That’s how we got the name.” 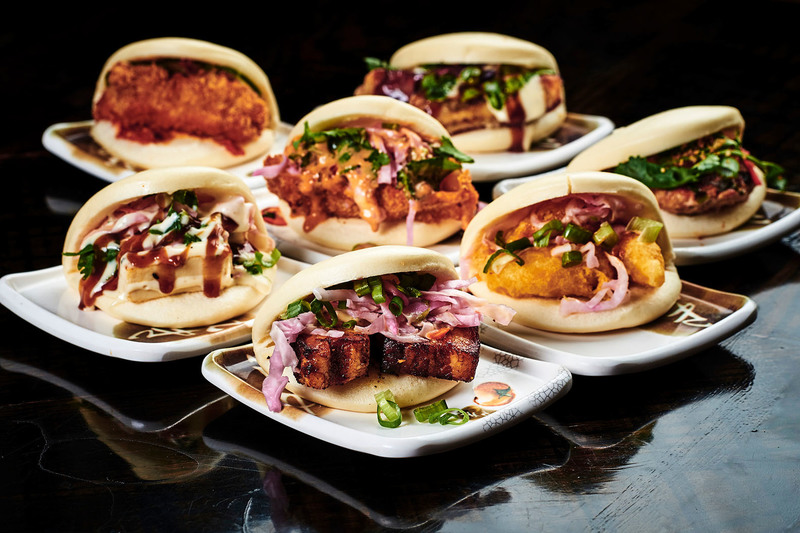 Jesse Newmister, Kaizen
Chef Jesse Newmister came to Knoxville to help open Northshore Brasserie. This experience gave him first-hand experience on what it takes to build a restaurant from the ground up. Looking to open his own restaurant, Newmister signed a lease on a space and saw it as a chance to help diversify the cuisine in downtown Knoxville. Knowing he wanted to go focus on Asian cuisine, Newmister researched what type of Asian restaurant would fit the space. 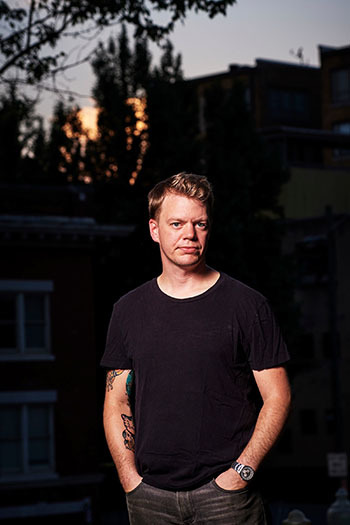 “After doing some research I never really knew what an ‘izakaya’ [Japanese-style pub] was before, and this space is perfect for a restaurant modeled after that,” he said. “We kind of had to fit into the space. When I signed the lease, I actually didn’t know what I was going to do with it.

“The word ‘kaizen’ basically means continuous improvement by looking at the details and seeing what you can improve, also taking input from everybody to better the whole,” Newmister explained.

Kaizen is focused on small-plate dishes. From pork belly buns to oyster fried rice, Newmister tries to keep the menu fresh and creative. Newmister also tries to use the Knoxville Farmers Market and local produce as often as possible in his cooking. “One thing I really like about this restaurant is that we don’t have as many constraints as other places do. There’s a pretty loose mold we have to adhere to,” Newmister said. “One of the great things about doing pan-Asian is that Asia is so big, there're so many ingredients to use. You could study Thai food for the rest of your life and not know all of it. We can continue to introduce new ingredients and techniques and frame them around local things.” 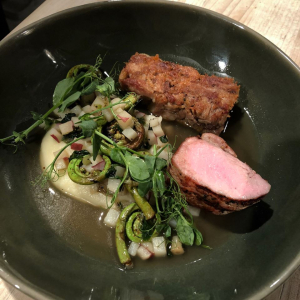 Joseph Lenn, J.C. Holdway
After a decade of cooking and mastering his skills at Blackberry Farm, James Beard Award-winning chef Joseph Lenn decided he wanted to open his own restaurant. The Knoxville native saw a shift in the dining scene and decided that if his former colleagues could open successful restaurants in Knoxville, he could probably do it too.

Inspired by his love of cooking over a wood fire, Lenn opened J.C. Holdway in 2016. “The decision to go with wood fire spawned from work I had done at Blackberry. And [it] came full circle from my childhood when we would camp out, and I was kind of a pyro as a child building fires,” Lenn said. 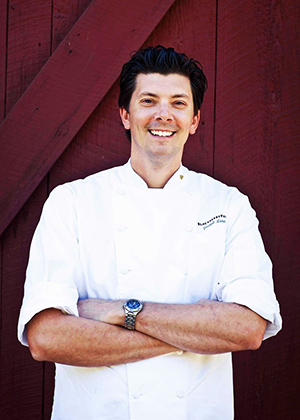 He went all in, purchasing a $20,000 wood fire oven to help him with that style of cooking. “I know it's an old-world technique, but I like things with some sort of smoke influence and that really comes from this region’s tradition of smoking and curing meats.”

The restaurant, which is named after Lenn’s uncle, Joseph Charles Holdway, has a creative menu that brings a twist to typical Southern cooking. When creating a new dish, Lenn bounces ideas back and forth with his staff to create innovative dishes, like a new take on Chinese sausage, that wouldn’t normally be found at a Southern restaurant. “I now have the ability to cook what I want and what tastes good,” he said.

Lenn’s response to customers who question his use of non-traditional ingredients? “Someone could say bok choy isn’t Southern, so why are you serving it, and [my response] is, why not? Farmers are growing it not far from here so how is it not Southern?” 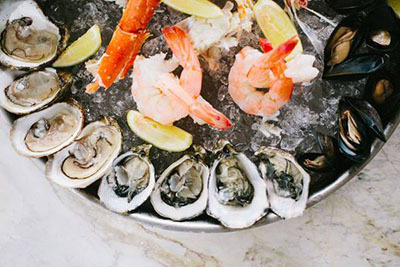 Northshore Brasserie is West Knoxville’s eurocentric neighborhood restaurant. On the menu you’ll find steak frites, mussels, roasted chicken and handmade pastas. Chef Joe Cunningham, who joined the restaurant almost two years ago, is dedicated to using local produce and ingredients from local farms to create classic dishes with a twist here and there. Cunningham, who is a D.C. native, has worked in kitchens up and down the East Coast including in New York City, Chapel Hill, North Carolina and East Tennessee’s Blackberry Farm.

When Cunningham joined Northshore Brasserie, he was looking for a new challenge and helping the restaurant establish itself sounded like a good option. Having lived and traveled throughout Europe, and having attended the French Culinary Institute, Cunningham was attracted to the fast-paced Eurocentric style of cooking at Northshore. “I’m all about classic cooking,” he said. “One thing I don’t like is when cooks try to recreate the wheel. Some of these things have been around for a while because they’re actually pretty good.”

Cunningham takes pride in knowing where his ingredients come from. “Even if it’s the dead of winter, we still have guys every week deliver to us,” he said. “We’re open lunch and dinner, so we have that need for supply, and for me it feels good if anyone asks, ‘Hey where are things coming from?’ we could tell you.”