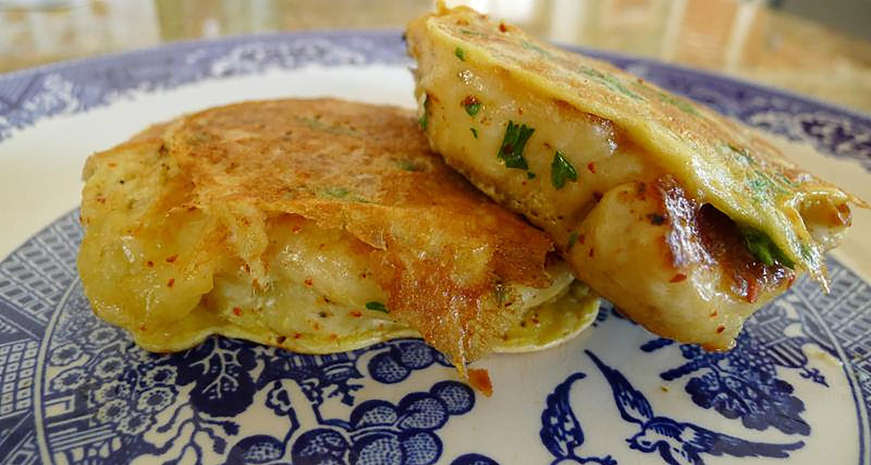 French toast pancakes are the best of both breakfast worlds

Necessity is the mother of invention, and I am the father of two young necessities. That is why, in the foggy hours of a recent morning, I invented pancake French toast.

They wanted French toast for breakfast, but we were out of bread. I wondered if we had any other bread-like materials in the house that could be soaked in egg and fried in butter. I decided on pancakes.

Making French toast out of pancakes involved an extra step of making blueberry pancakes first, but disaster was averted. After the school bus left I got back to work. Though I rarely eat breakfast, I was curious about those golden brown disks of French toast pancakes. I'm not a sweet-breakfast person; I like my eggs salty and spicy. I saw no reason why pancake French toast couldn't be savory.

After all, crepes — those beloved French pancakes — come with both sweet and savory fillings. So savory French toast pancakes made sense, at least on paper. I began my experiments. A mushroom and garlic version was lovely, as was the tofu scallion. My favorite so far, which I will tell you how to make, is ham and cheese.

One thing they all have in common is their supple, spongy-yet-toothy texture. A brown, crispy, French toast-like exterior guards an eggy batter below the surface, and a dry puffy pancake in the middle. At the table, they are formidable adversaries: fat, rounded and heavy. Unlike most pancakes, which leave you hungry a few minutes later, these won't abandon your belly.

I don't have a waffle iron, so I haven't explored French toast waffles. I'm bad at making gravy, so I haven't smothered a pancake with it. Surely there are more winning variations to discover. They will all taste great with coffee, I'm quite certain, which is my definition of a truly great breakfast, regardless of the time of day it is served.

In this recipe, pancakes are dipped in beaten eggs, as if they were slices of bread. For lovers of sweet breakfast, the same technique can be used, with berries in the pancake mix and cinnamon, nutmeg and vanilla in the French toast batter.

I hate to sound like a shill, but the best pancakes I've ever made have been with Krusteaz Buttermilk Pancake Mix. I first tried it in Alaska as a breading for deep-fried halibut, mixed with beer instead of water. It's magical stuff. 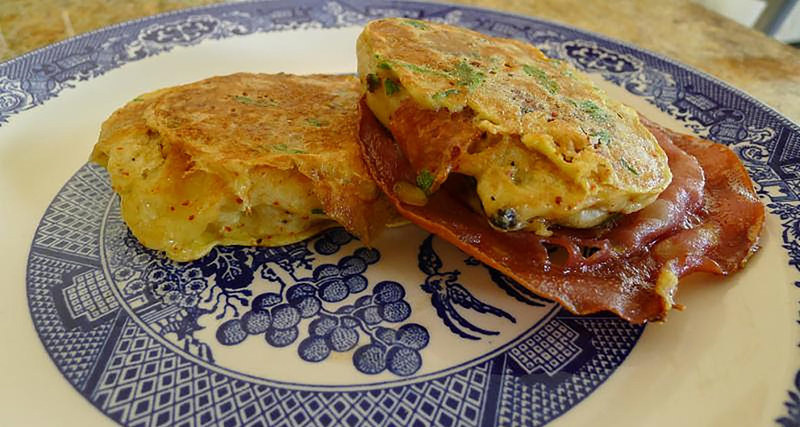 Instructions
In a medium bowl, combine the pancake batter, ham and cheese.

Heat a stovetop griddle to medium-high. Coat it with 1 tablespoon butter, and the scoop out the pancake batter to form 3 large pancakes. Don't worry about any protruding pieces of ham or cheese. They will fall in line when you flip the pancakes. Cook for about 2 minutes per side; overcooking will create an impermeable skin that won't soak up the French toast batter.

Remove the cooked pancakes and let them cool on a plate for about 10 minutes.

Meanwhile, crack the egg into the unwashed vessel in which you mixed the pancake batter. Add the milk and spices, if desired, and beat. Incorporate as much of the leftover pancake mix as possible in order to give body to the French toast batter.

In a pan on medium heat, add the remaining tablespoon of butter and swirl to coat. Add the battered pancakes, then pour any remaining batter on top of the pancakes; it will run down the sides and start cooking into scrambled eggs. When the egg around the sides looks cooked, about 2 minutes, flip the pancakes and cook for 2 minutes on the other side. Serve with salsa, mayonnaise or gravy. And coffee, of course.