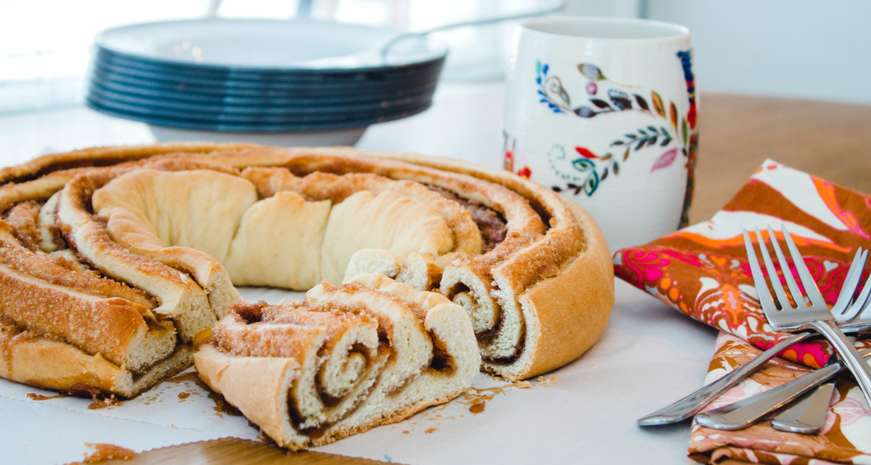 Stop into any bakery near New Orleans this time of year and you'll likely be greeted by a flood of purple, yellow and green ring-shaped cakes, sparkling with sprinkles and displayed with brightly colored beads, masks, and doubloons. Yes, it's King Cake season, and with it comes plenty of tongue-dying food coloring, plastic babies and way too much sugar.

Said to honor the three kings, or wise men, who visited the baby Jesus on the 12th day of Christmas, versions of King Cakes have been eaten by Christians since at least the Middle Ages. According to Scientific American, this tradition was picked up not from ancient Christian elders, but from cakes eaten for the winter solstice celebration of Saturnalia:

Cakes were made to celebrate the harvest and, according to Larousse Gastronomique, “During the Saturnalia the “king of the day” was chosen by lot, using a bean concealed in a galette. It was only in the Middle Ages that this cake ceremony began to be associated with the festival of Epiphany.” 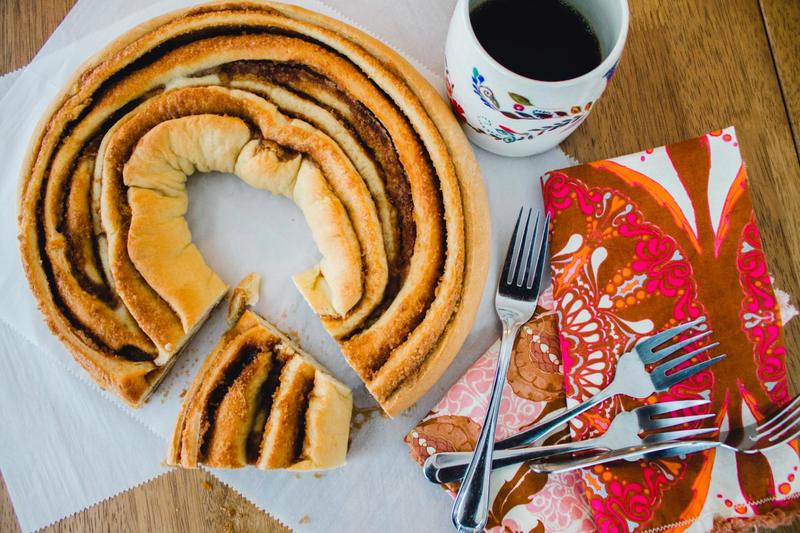 As the tradition was adopted by Christians, the bean became symbolic of the baby Jesus (or a king, depending on who you ask), and, by the 1300s, the cake had become popular throughout France. While they were originally eaten just around the holiday of Epiphany, king cakes gradually became a season-long treat enjoyed up until the beginning of Lent.

It's easy to forget that these cakes didn't always come in varying shades of neon; they varied depending on the region from which they came. Northern French king cakes are, at least now, more often made from puff pastry and filled with an almond-sugar mixture. Further south in France, and into the Basque region of Spain, king cakes are made from brioche-like dough and filled with cinnamon and spices. It is this Southern-style cake that made its way to New Orleans in 1718.

Over time, this simple cake adopted the more raucous nature of the pre-Lenten season, gaining more fillings and more frostings with each passing year. In the mid-20th century, the bakery McKenzie's popularized the practice of hiding a plastic baby figurine inside the cake, and today, many bakeries offer dozens of flavors of the cake, including cakes as elaborate as praline crunch, and the Elvis-inspired bacon, chocolate and banana. Decorations are as simple as a dusting of colored sugar, or as elaborate as multicolored metallic glaze.

Southern Kitchen contributor and cookbook author Anne Byrn included two king cake recipes in her book, "American Cake," one of which is similar to that original Basque cake. The second, slightly easier cake, is made with store-bought puff pastry, a common shortcut that delivers a buttery dessert in a fraction of the time. Still, if you're not one for all that sugar (ahem, me, ahem), it's best to stick with the older version, which, even if fairly time consuming, isn't difficult to make. You don't even need a stand mixer to knead the brioche dough, and the striking stripes on top are achievable even for beginner bakers. 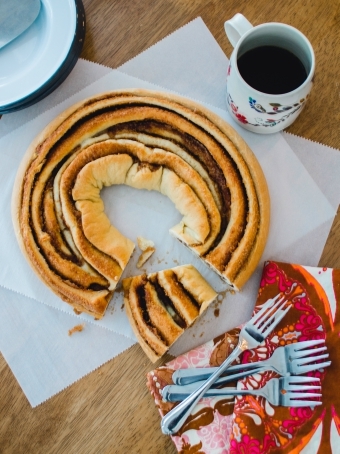 Cinnamon Swirl King Cake
Note: This recipe is lightly adapted with permission from Anne Byrn's cookbook, American Cake, where she writes that you can adapt the filling to suit any of your favorite flavors, such as raisins, chopped nuts, or even citrus zest.

Instructions
To make the dough: Lightly grease a large bowl with butter. Line a rimmed baking sheet with parchment paper.

In a second large bowl, stir together the water, milk and yeast. Stir in the butter, sugar, nutmeg and salt. Add 1 cup of the flour and blend well, smashing the butter against the sides of the bowl to mix it into the flour. Stir in the eggs and the remaining 2 cups flour. Mix well to form a soft dough.

Transfer the dough to a lightly floured counter and knead until the dough is smooth and elastic, about 5 minutes. Add a little more flour, if needed, to prevent the dough from sticking to the counter. Transfer to the buttered bowl. Turn the dough so that the top is greased. Cover with plastic wrap, place in a warm location, and let rise until the dough has doubled in size, 1 to 1 1/2 hours.

Meanwhile, make the filling: In a medium bowl, stir together the brown sugar and cinnamon.

Once the dough has risen, transfer it to a lightly floured counter and, with a floured rolling pin, roll the dough out to a 9- by 26-inch rectangle. Brush with the melted butter and sprinkle the brown sugar mixture evenly over the dough, leaving about 1/2 inch of bare dough along the far long edge.

Beginning at the long end closest to you, roll the dough up tightly, as for a jelly roll. Lightly blot the bare edge with water and press and pinch firmly to seal. Carefully pick up the rolled dough and place it, seam side-down, on the prepared baking sheet. Bring together the two ends to make a 12-inch circle. Blot the ends with a little water and pinch together to seal. Use a sharp knife to slice open the middle of the circle all the way around, cutting through the layers and almost to the bottom of the dough. Cover with a clean kitchen towel, place in a warm location, and let rise until doubled in size, about 40 minutes.

Meanwhile, heat the oven to 350 degrees.

Once the dough has risen, bake until it is lightly browned all over, 25 to 30 minutes. Transfer the cake to a wire rack to cool for 15 minutes. If you'd like to insert a plastic baby figurine, push it into the underside of the cake now.