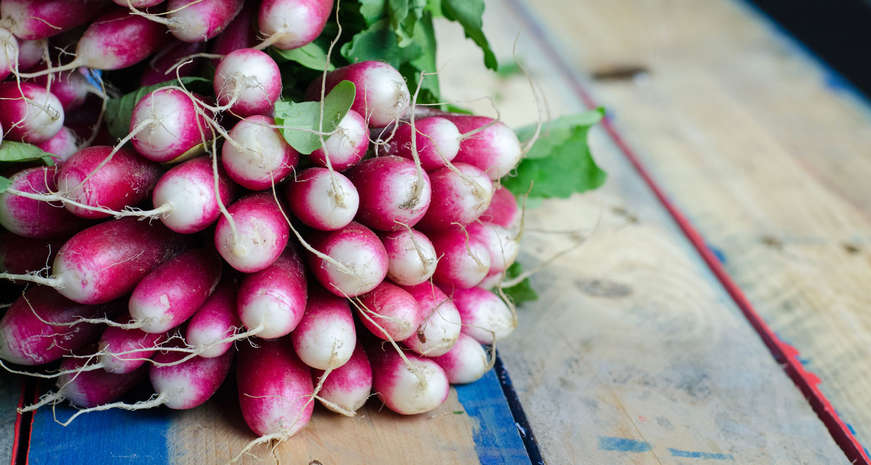 Forget what you think you know about radishes, this savory frittata dish redefines how delicious they can be

A radish sends mixed messages. It can look like something designed by Willy Wonka, but taste like mustard gas. In perhaps the ultimate bait-and-switch of the vegetable world, eating a radish can feel like leaning in for a kiss and getting slapped. Which I'm not saying is a bad thing. The key is to get as much mileage out of that slap as you can.

Too often, radishes are sliced into salads, which doesn't offer enough contrast to let them shine. The company of other raw plant parts brings out unflattering sides of a radish and, likewise, it can make the entire salad too harsh.

But it doesn't take much to let a radish shine. For hundreds of years before the advent of avocado toast, French chefs have laid thin slices of salted radish upon heavily buttered baguettes.

Taming the taste
It's a simple recipe, but not at all plain. The radish's watery, pickle-like crunch adds texture to the yeasty, crusty medium. Disarmed by salt and harnessed by butter, the root's pungency is put to work, without the slightest foul whiff to be sniffed.

I make radish toast on sourdough, with a few thin slices of onion. The key is to not skimp on the butter, and don't forget the salt.

Indeed, salt alone makes a big difference with a radish, countering its feisty flavor with an equal but opposing force. On cut radish, a pinch of salt pulls droplets of water from the white faces. The slices become translucent, like pieces of sushi, and deliver a brief, salty, wasabi-like hit. A simple plate of salted radish makes a great palate cleanser between courses. Or soak off the salted radish in water. It will crisp up a little, but stay mild.

Another way to tame a radish is with heat, in both temperature and spicy senses of the word. Radishes get mellow with cooking, their pungency replaced with sweetness. Spicy heat, meanwhile, fights fire with fire, building a spicy bridge between a radish and the rest of a meal.

In the Himalayas, they employ all of the above radish tactics. Phagshapa is a pork and radish-based dish that uses not only chile but ginger and onion to convene a pow-wow of pungency. Phagshapa was one of my favorite dishes during a brief time I spent in Bhutan. Thanks to sadomasochistic levels of hot pepper and ginger in a properly prepared rendition, this is not a dish for the faint of heart, mouth or belly. If I gave you the recipe I would feel responsible for your safety.

But don't blame the radish for that drama. It is sweet and mellow by serving time, thanks to the cooking. Next to the chile and ginger, the radish is a refuge from the more intense flavors, while contributing a subtle layer of umami. Whatever a radish is cooked in or on, be it pizza, stew or frittata, it has a way of quietly making food taste better without being obnoxious.

Borrowing from the best
Radish frittata is my New World answer to phagshapa, with chopped bacon taking the place of boiled pork. And in a nod to France, my frittata contains butter.

It consists of a crispy matrix of bacon and potato, embedded with radish slices and whole radish leaves and other select flavorings, and topped with a fried egg &#8212; or conjoined with a beaten egg.

We use the radish leaves because they are tender and tasty, contain more nutrients than the roots, and because there is not a single reason not to. Some radish varieties are grown specifically for their leaves, though any radish leaf is worth eating. But not in salad, as some radish leaves can be fuzzy when raw.

In the radish frittata, they add to the matrix, and are a welcome splash of green. My frittata may not measure up to a French radish sandwich or Bhutanese phagshapa in terms of pure elegance or cultural importance, but it's an American-style way to eat radish that borrows from the best, and tastes good with coffee.

Instructions
Add the chopped bacon to a heavy pan on medium heat, then the grated potato (which I grate directly into the pan as it heats). Unless the bacon is super-fatty, add the olive oil. Stir at a medium pace, allowing crust to form and brown but not burn on the bottom before scraping it off the pan. Cook for about 10 minutes, until it looks like a splintered bird nest.

Beat the egg, if going the beaten route, with a tablespoon of milk, cream or water.

Push the potato matrix to the side of the pan and add the butter, garlic, radish parts, salt, pepper and jalapeno. When the radishes are wilted and soft and you can smell the garlic, about 2 minutes, stir everything together and spread it out. Make a little dimple in the pile, like a nest, to catch the egg.

Crack or pour the egg into the dimple and allow it to cook, unstirred, for about 2 minutes, uncovered. If the egg is sunny side up, add a teaspoon of water to the side of the pan and put a lid on, to steam the top. If using beaten egg, give it a few stirs to break it up and turn it over, so all the egg cooks. Serve hot.

Get more bacon into your life

16 breakfast dishes you can find on a Southern table

Get more bacon into your life

16 breakfast dishes you can find on a Southern table