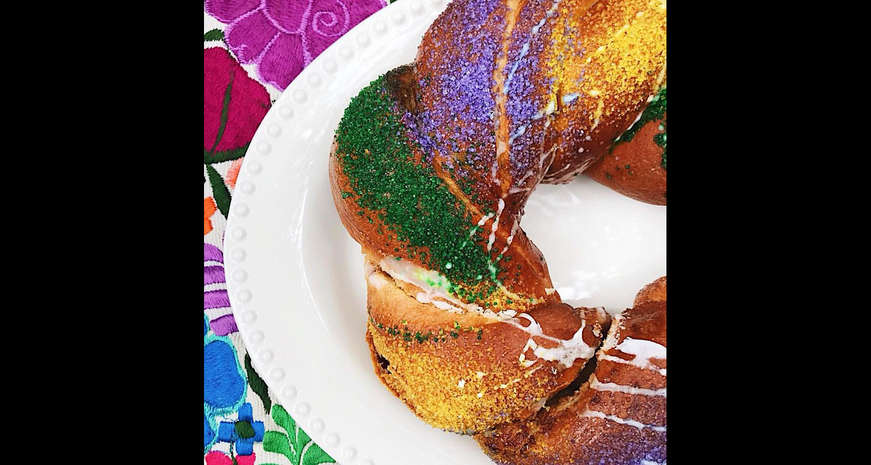 A Mardi Gras celebration is not complete without a sugary, sweet and colorful king cake. Originally used as part of a Christian tradition to celebrate the arrival of the Three Wise Men in Bethlehem, king cakes are now just as much a part of the party as Hurricanes, parades and beads.

Over time, the king cake has taken many forms. The classic French version of a king cake, the galette des rois, is a puff pastry cake that is usually filled with frangipane (a sweet cream made from almonds, butter sugar and eggs). Today, the modern, New Orleans-style king cakes are shaped like rings and covered in purple, yellow and green sugar. In both versions, small charms, usually plastic baby figurines that represent Jesus, are hidden somewhere in the cake and the person who finds the charm will have both good luck and the task of bringing a king cake to the next party.

With growing influence from Latin American cultures in the South, the Roscón de Reyes (three kings cake) is becoming more and more popular. The Roscón de Reyes is “a crown-shaped cake made of yeast-based bread that is very fluffy and airy once baked. The rosca is typically topped with candied fruits and bands of colorful, sugary paste,” according to National Public Radio.

While many bakers love making these three classic types of cake, others across the South are taking creative liberty and putting their own spin on the traditional treat. To get you ready for the party, we’ve rounded up the very best of these cakes. Click the arrows above to see (and drool over) each one. 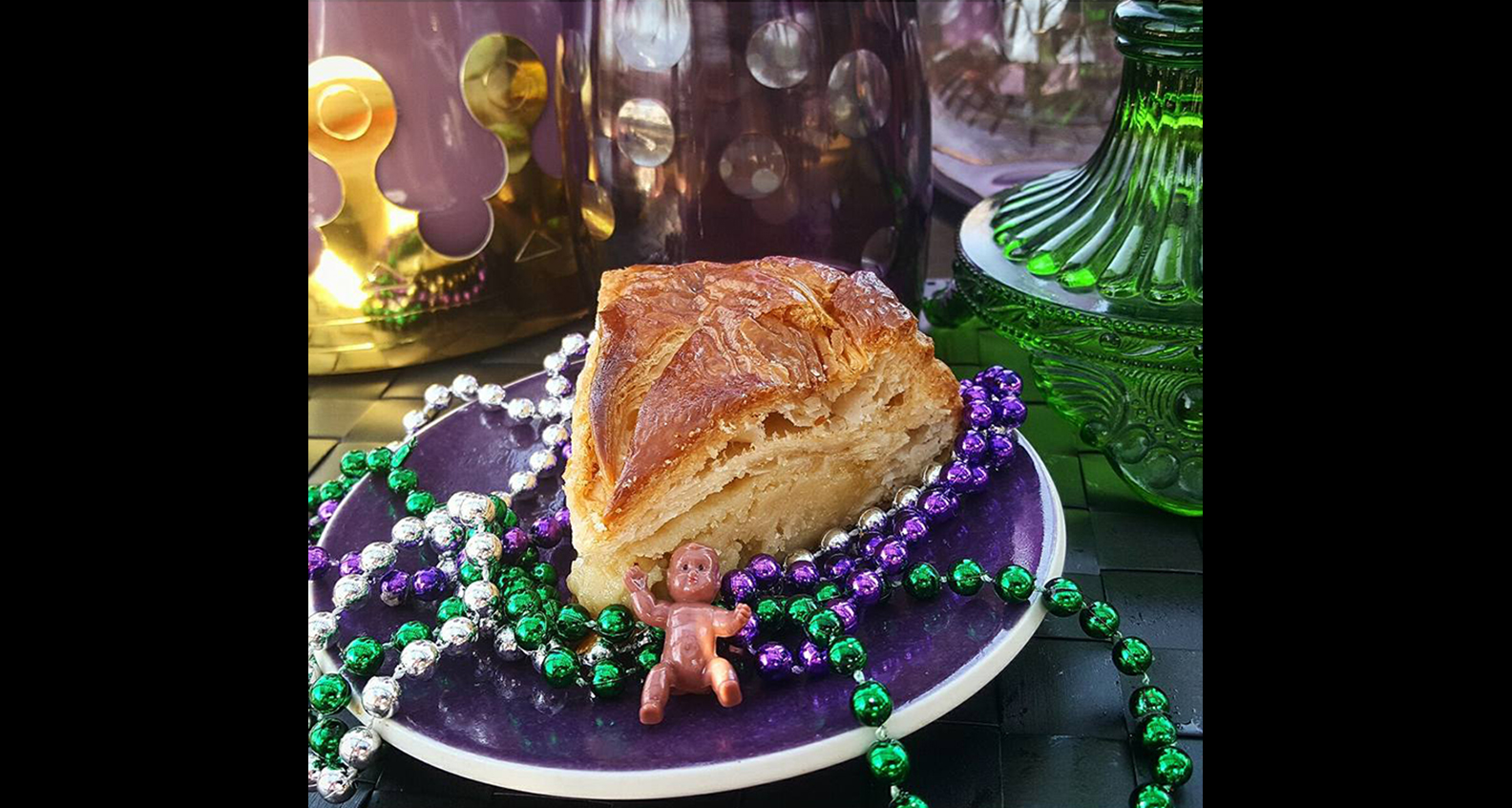 This Austin bakery has been offering everything from buttery cookies to French pastries for the past 40 years. If you’re looking for a classic puff pastry galette de rois, you can't do much better than Sweetish Hill’s house-made almond paste-filled cake. 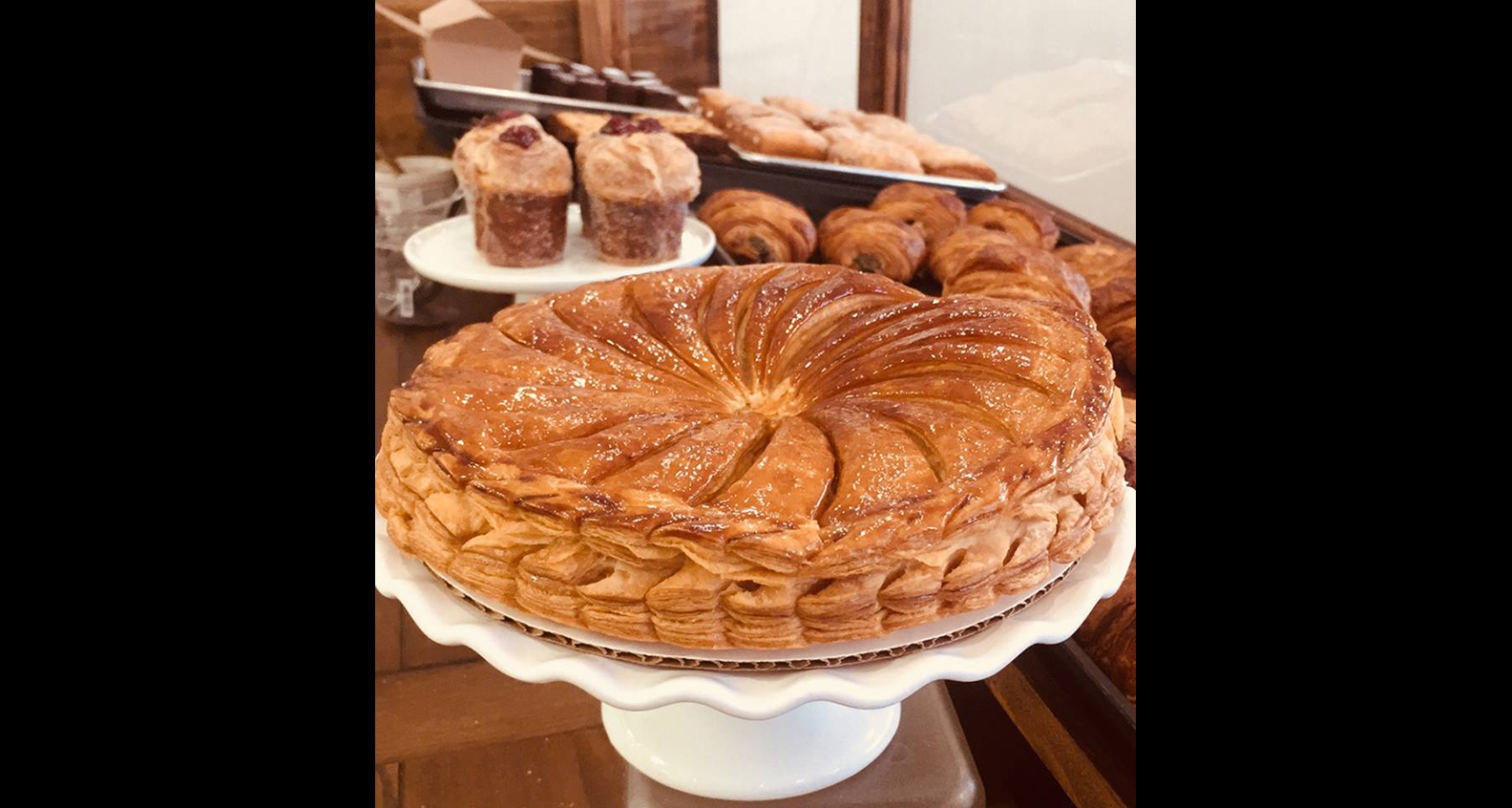 Lya and Jeff Becnel have been in the restaurant industry for the past 25 years. At La Petite Sophie Patisserie, the two have brought their unique styles to the New Orleans food scene, and their updated versions of time-honored pastries are turning heads. Their classic galette de rois looks like it came right out of a French bakery. 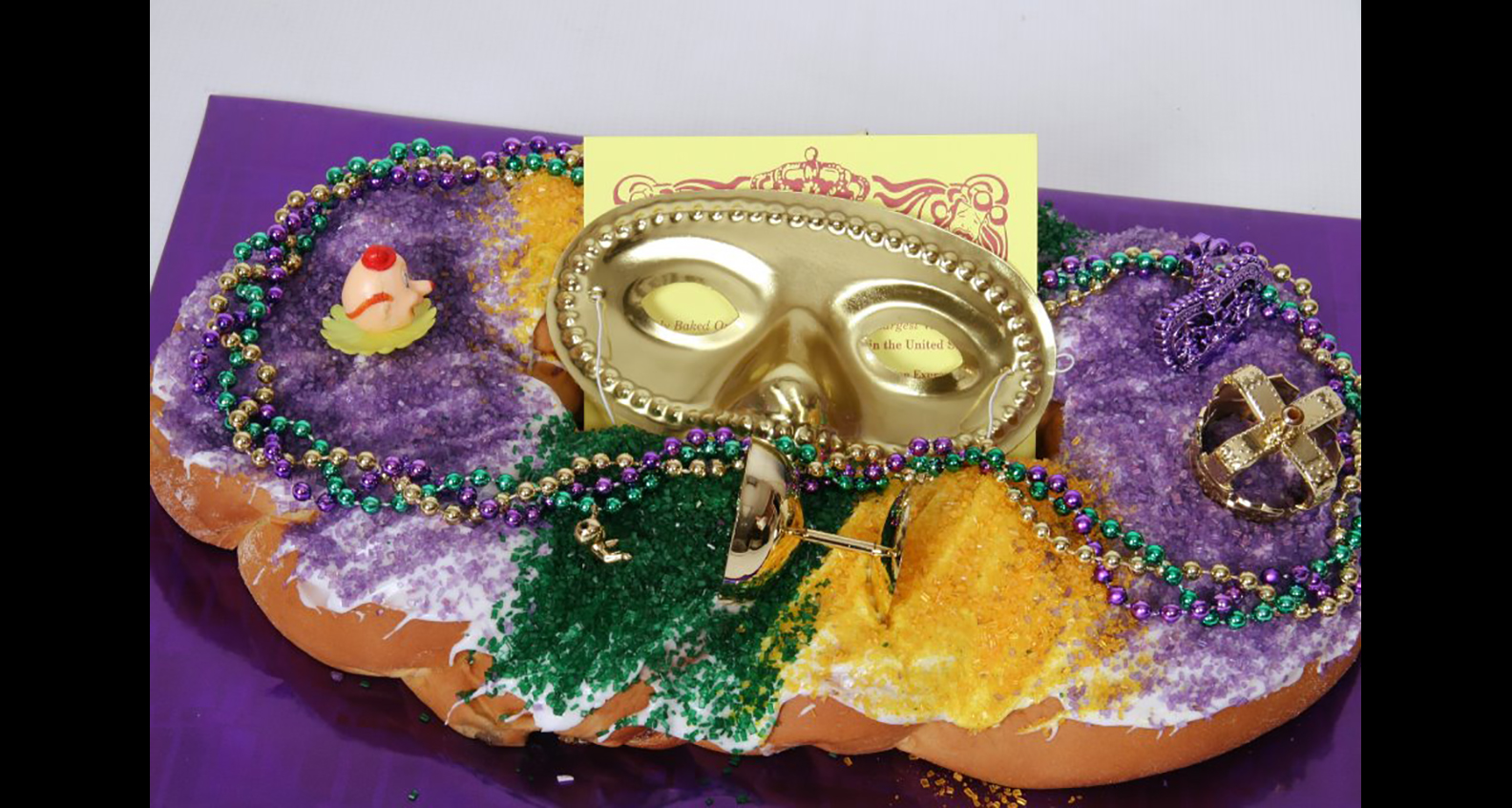 60 flavors of king cakes at Cannata’s in Houma, Louisiana

With 60 flavors to choose from, it might be hard to choose just one king cake at Cannata's. The cakes are made from scratch and come with a few Mardi Gras trinkets to help you decorate. It’s fine if you want to stick with a classic flavor like cinnamon pecan, but customers who want to branch out can try more adventurous fillings like gooey butter snickerdoodle, Creole praline or coconut chocolate cherry. 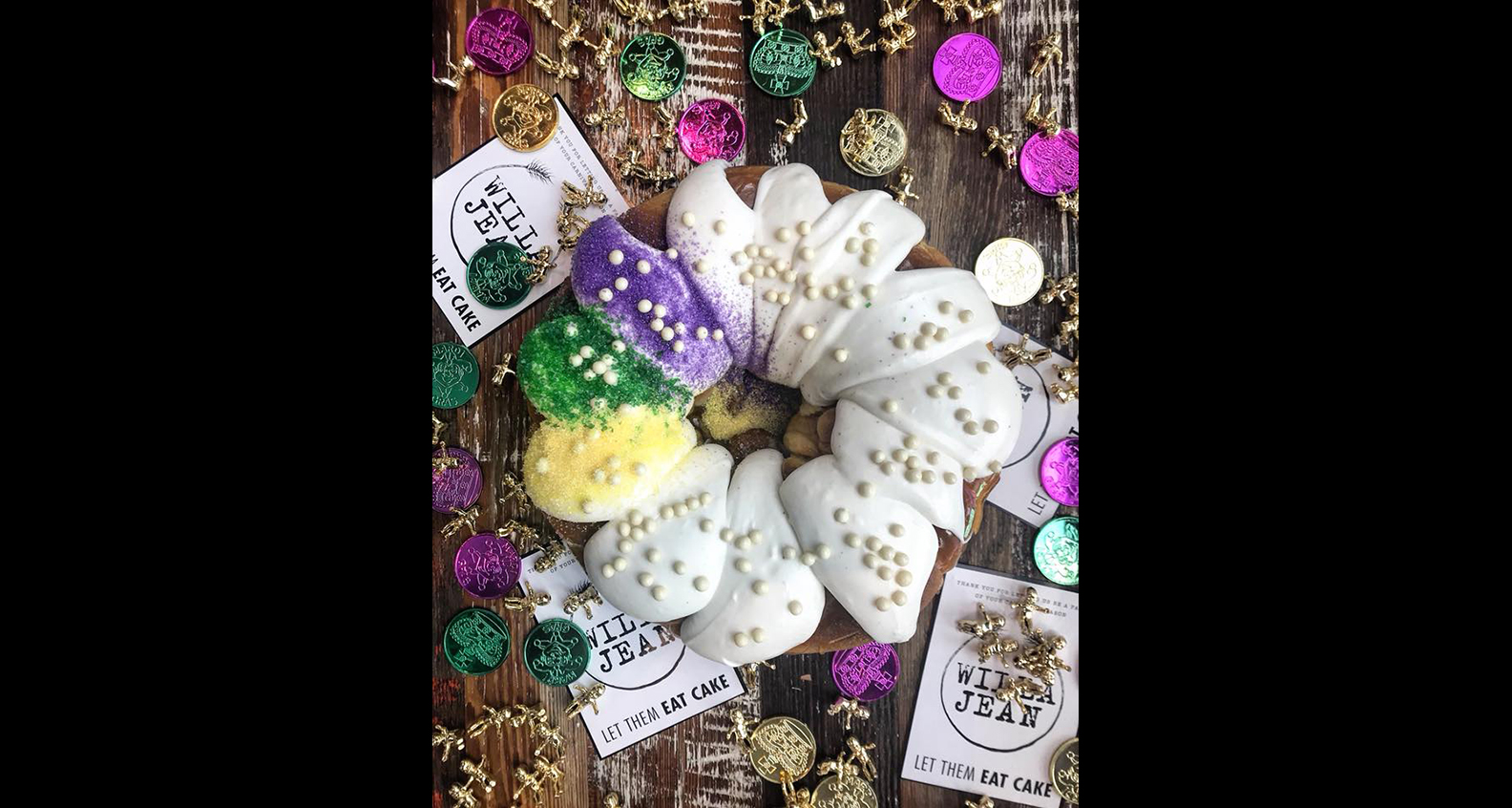 Executive pastry chef Kelly Fields has invented some creative takes on a king cake. In the past, she’s combined ingredients as unique as mascarpone, bananas and caramel sauce in the filling, but this year, Fields is offering a caramel crunch king cake with a cream cheese glaze. The icing on her cake? Spectacular decorations. 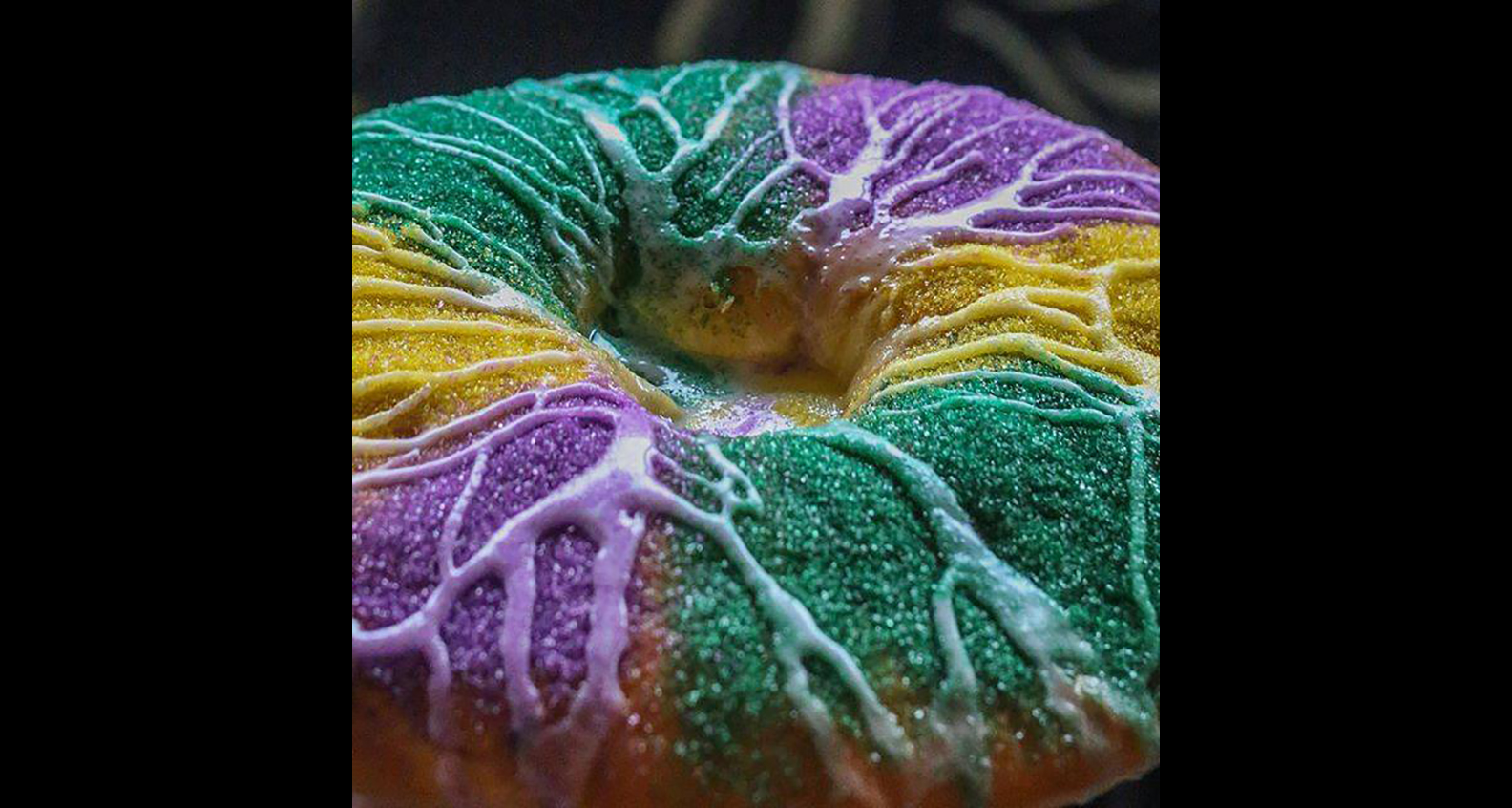 Getting a king cake without leaving your car is a possibility thanks to Bywater Bakery. Order a king cake online and curb-side pickup of your choice of eight different flavors is available every Friday. For fruit lovers, a chantilly king cake is filled with a light, berry-filled chantilly cream or the strawberry king cake are good options. Looking for a more adventurous flavor? The bouillie king cake, a traditional king cake filled with Cajun bouillie custard. 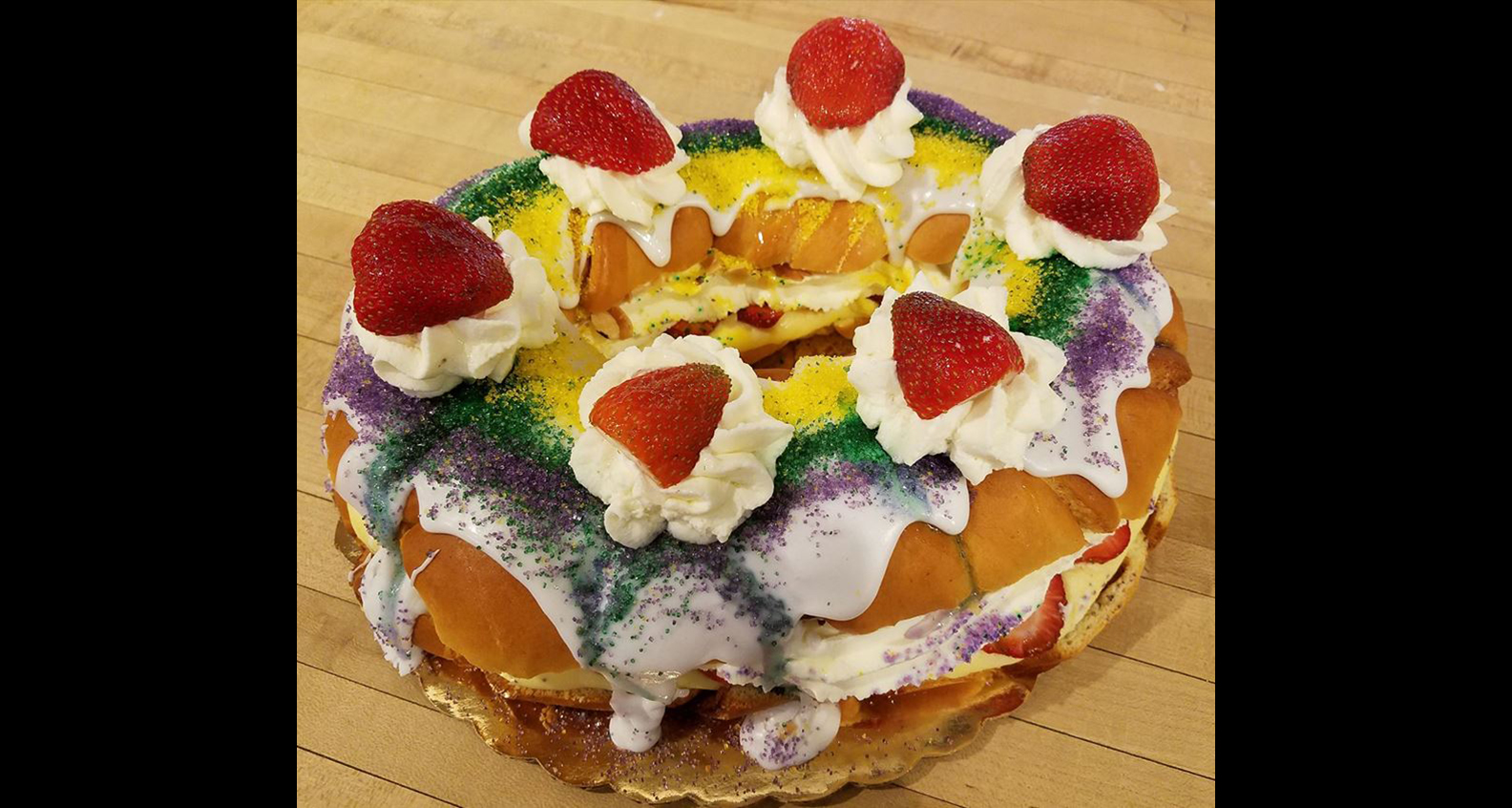 All of the classic French pastries created by Jean-Luc Albin at Maurice’s French Pastries are beautiful, but the king cakes are truly something else. The Woodland Plantation cake is filled with Bavarian praline cream, praline morsels, Southern Comfort liquor and chantilly cream, and the Bourbon Street cake has a creamy chocolate custard flavored with Kentucky bourbon, chantilly cream and toasted pecans. Or if you don’t want any booze in your king cake, the Ponchatoula (pictured above) is filled with Bavarian cream and topped with fresh strawberries, chantilly cream and toasted almonds. 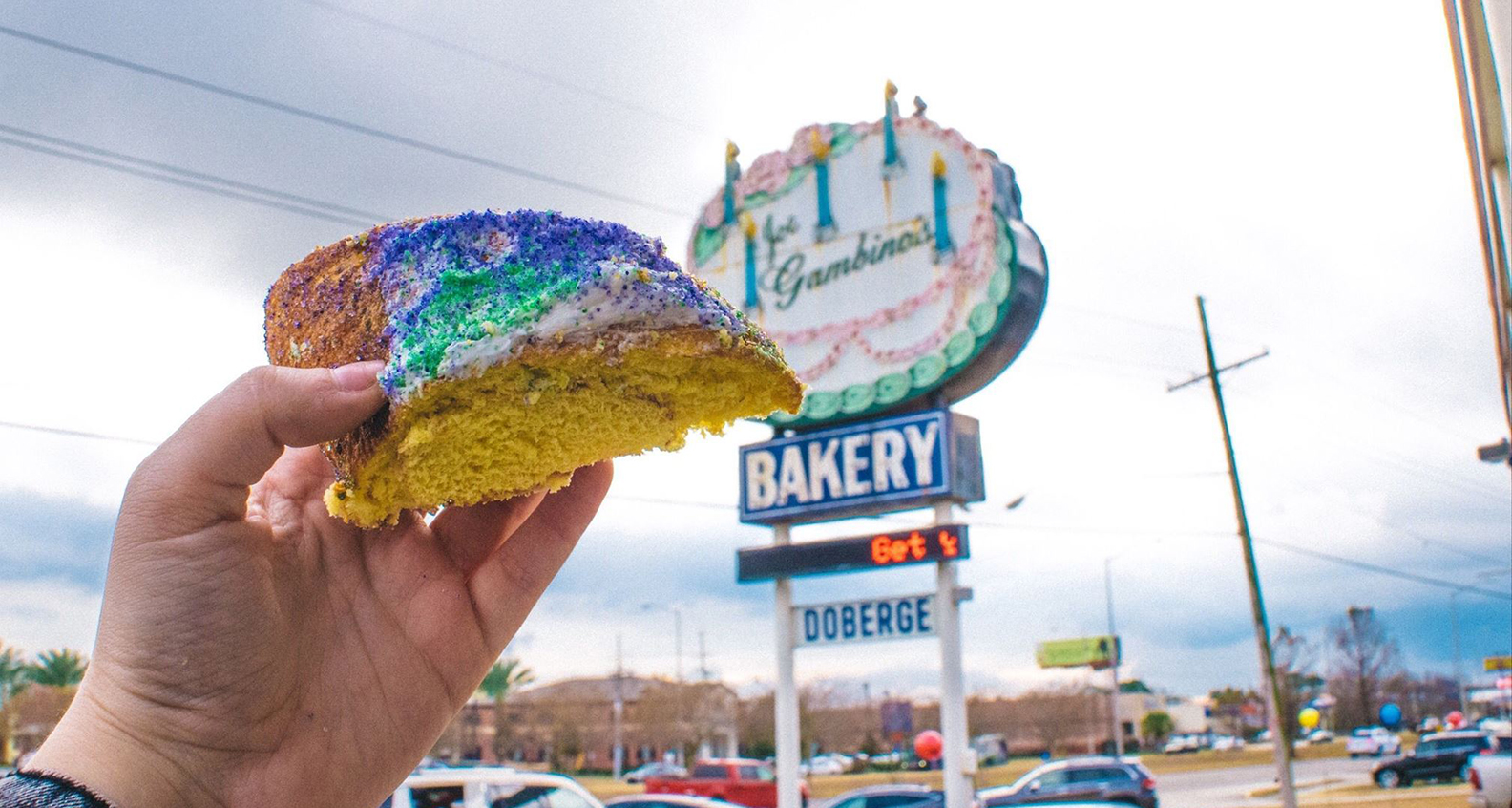 This bakery has been baking classic New Orleans-style king cakes for over 60 years and Mardi Gras wouldn’t be complete without one. Gambino’s king cakes aren't just for those living in the Crescent City — colored sugar loving customers can have them shipped around the world.

And while the traditional version is great, the bakery has a few other Mardi Gras treats that are just as sweet. Try the petit four-size king cake bites or the jester cake, a brightly-colored layer cake that’s available by the slice or full shebang.

Any size cake you want from Walton’s Fancy and Staple in Austin, Texas

If you don’t need a giant king cake for a large party, the brightly colored cakes from Walton’s Fancy and Staple come in a few different sizes. Or if you just want a slice, you can order that, too. 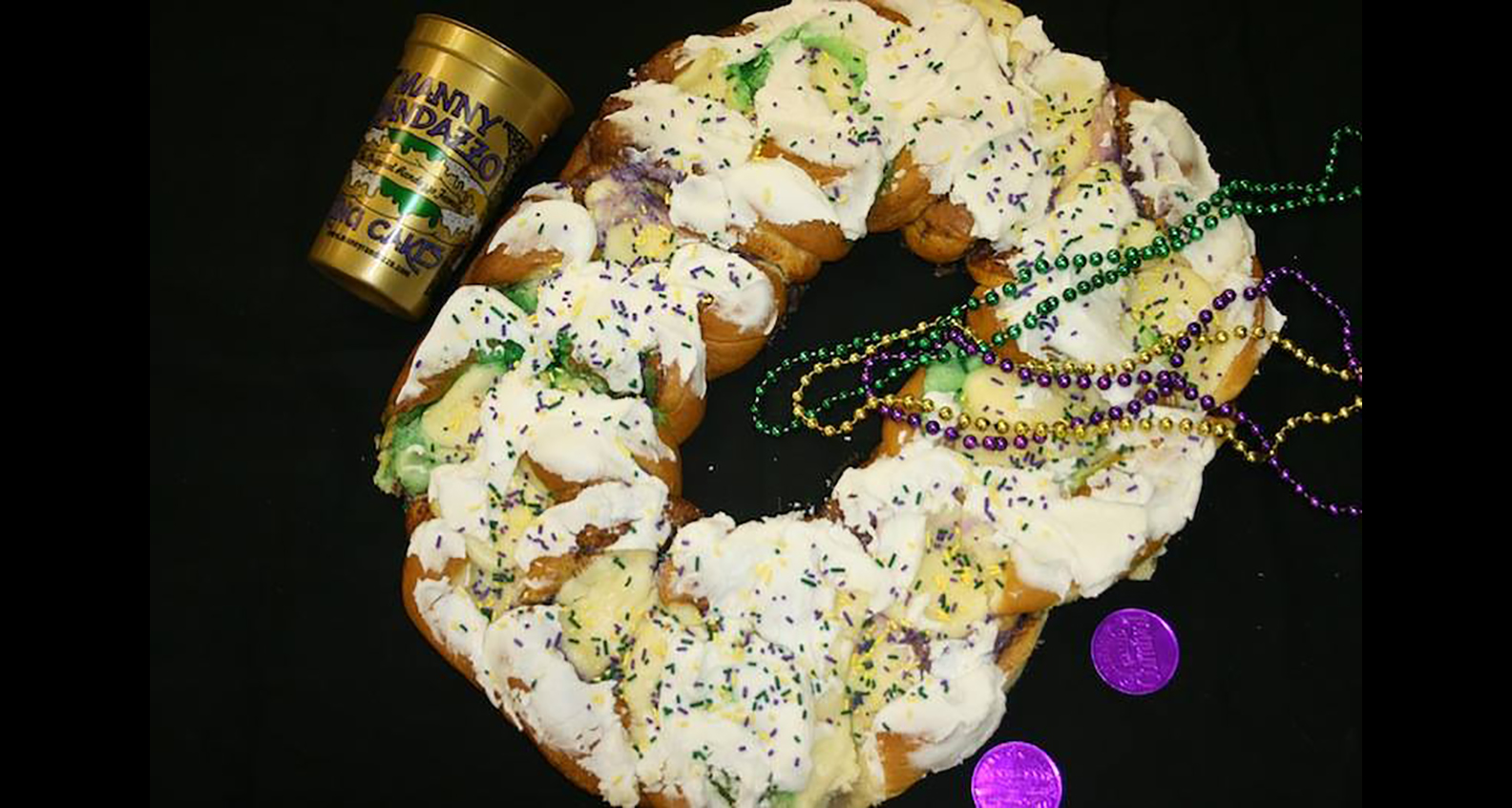 For more than 50 years, Manny Randazzo’s has been serving up some of the best king cakes in the city. The bakery has long lines throughout carnival season, but for king cake lovers who can’t make it to the bakery in New Orleans, it ships the cakes across the country, even overnight. The cakes come in seven different flavors, but the pecan praline king cake is the stand-out — it won the King Cake Crown from the Times-Picayune. 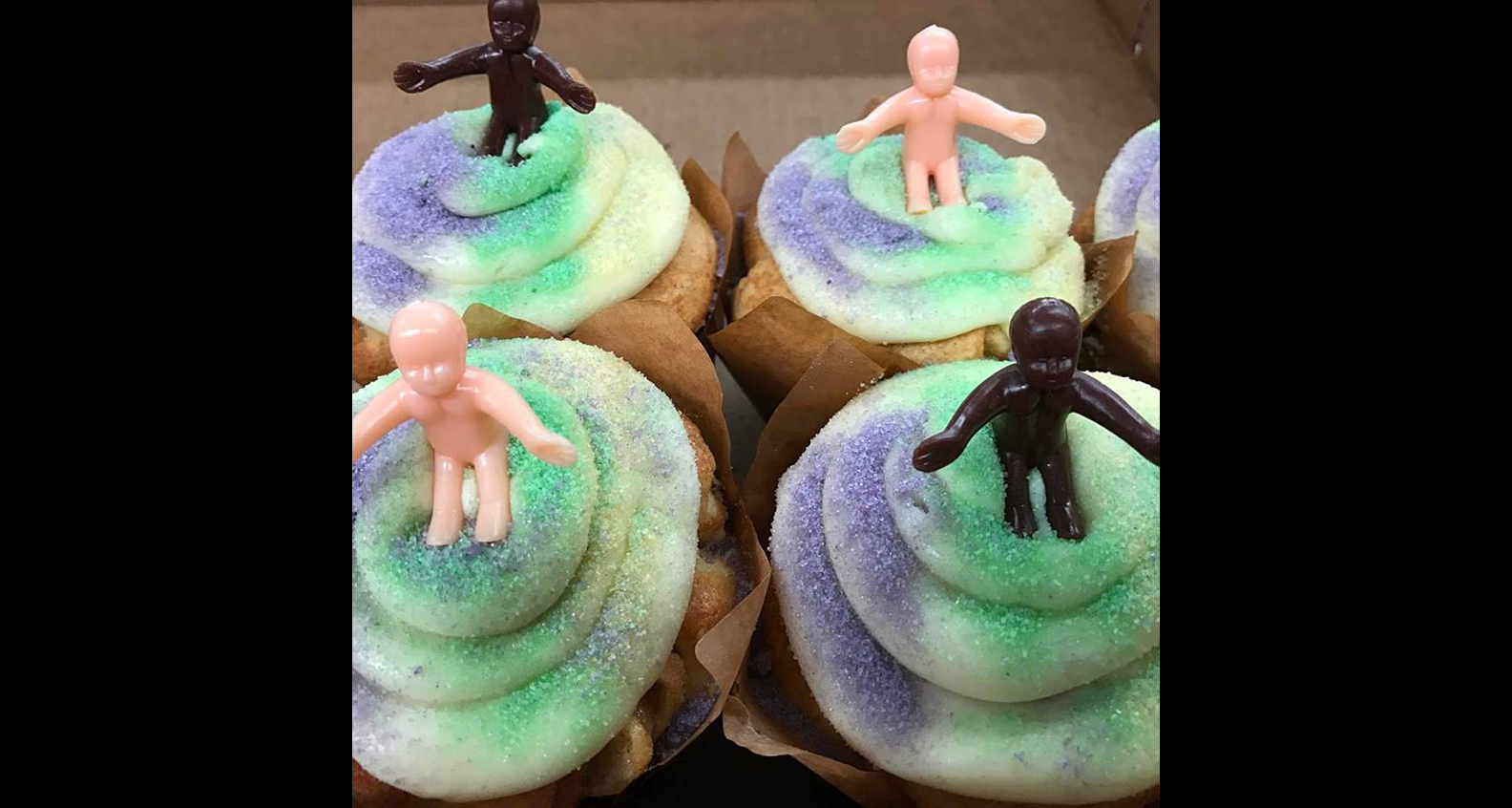 Baker Nicole Wolfe is bringing New Orleans to Nashville with her miniature takes on the king cake. All of the cute treats are made from scratch and topped with naturally dyed sugar decorations. Her flavors include cinnamon, blueberry, raspberry and cream cheese, but the lemon curd is the winner, according to Nashville Scene.

The king cakes from Haydel’s Bakery are not only baked for Mardi Gras, but they also come in different shapes and colors for holidays throughout the year. Of course, the classic green, gold and purple sugar sprinkles are on the menu, but customers can also choose from black and gold sprinkles to honor the New Orleans Saints, red and green sprinkles for Christmas, and red and pink sprinkles for Valentine’s Day. Customers can also choose from a king cake shaped like a fleur de lis, a heart or a candy cane. If these myriad decoration options aren’t enough, there are eight flavors of filling to choose from.

Hey Alabama! Can’t make it to NOLA for Mardi Gras this year? Not to worry, Edgar’s Bakery in Birmingham has a classic king cake on its menu. The purple, green and gold oval-shaped cake is made from scratch using cinnamon roll dough. Customers can choose between cream cheese, pecan praline or strawberry cream cheese as a filling. 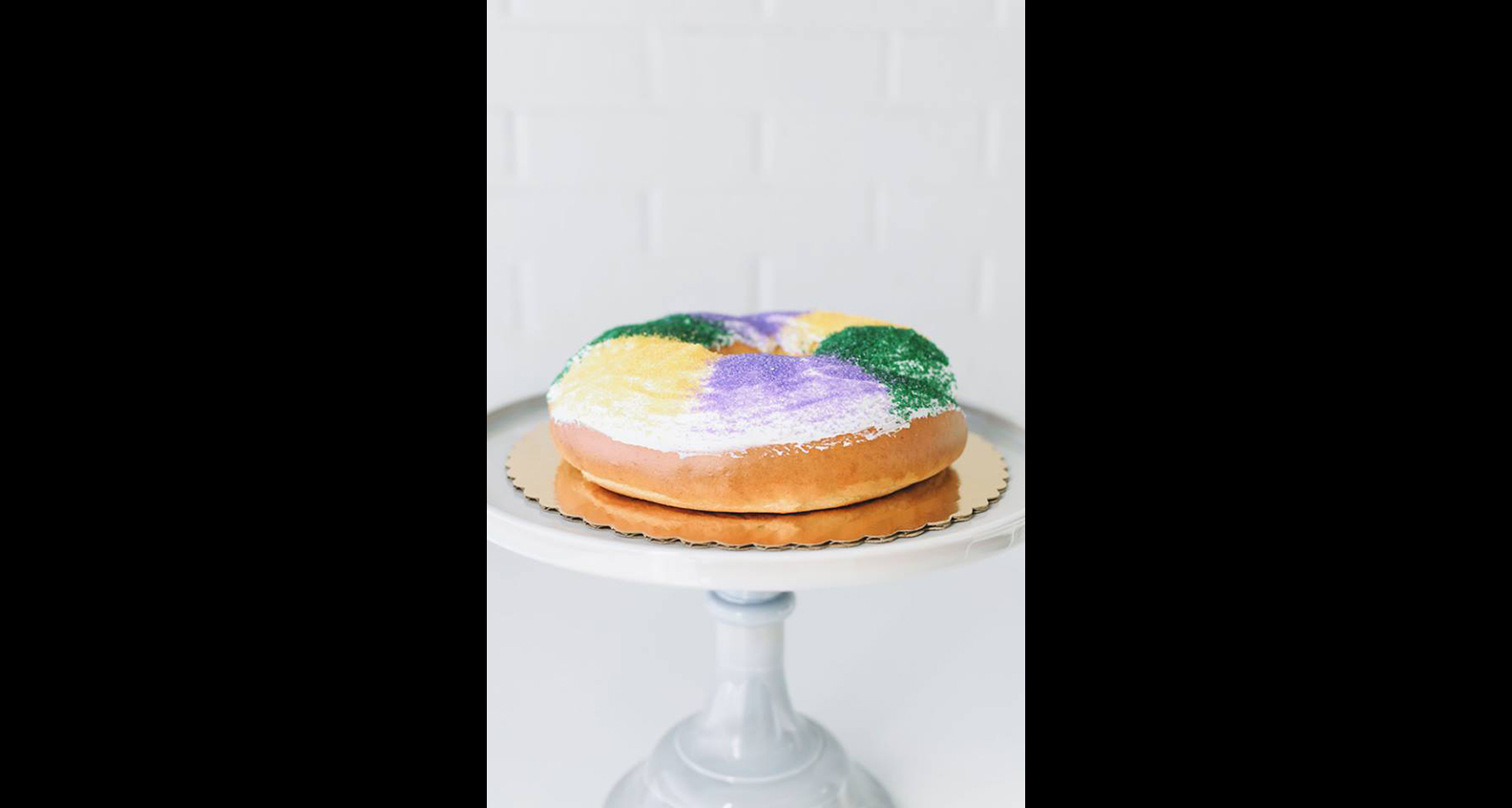 It’s easy to grab a king cake even if you’re far away from NOLA in the Queen city for Mardi Gras. At Suárez Bakery, the king cake is made with a sweet brioche dough and iced with vanilla glaze. It's simple, but sure is delicious. 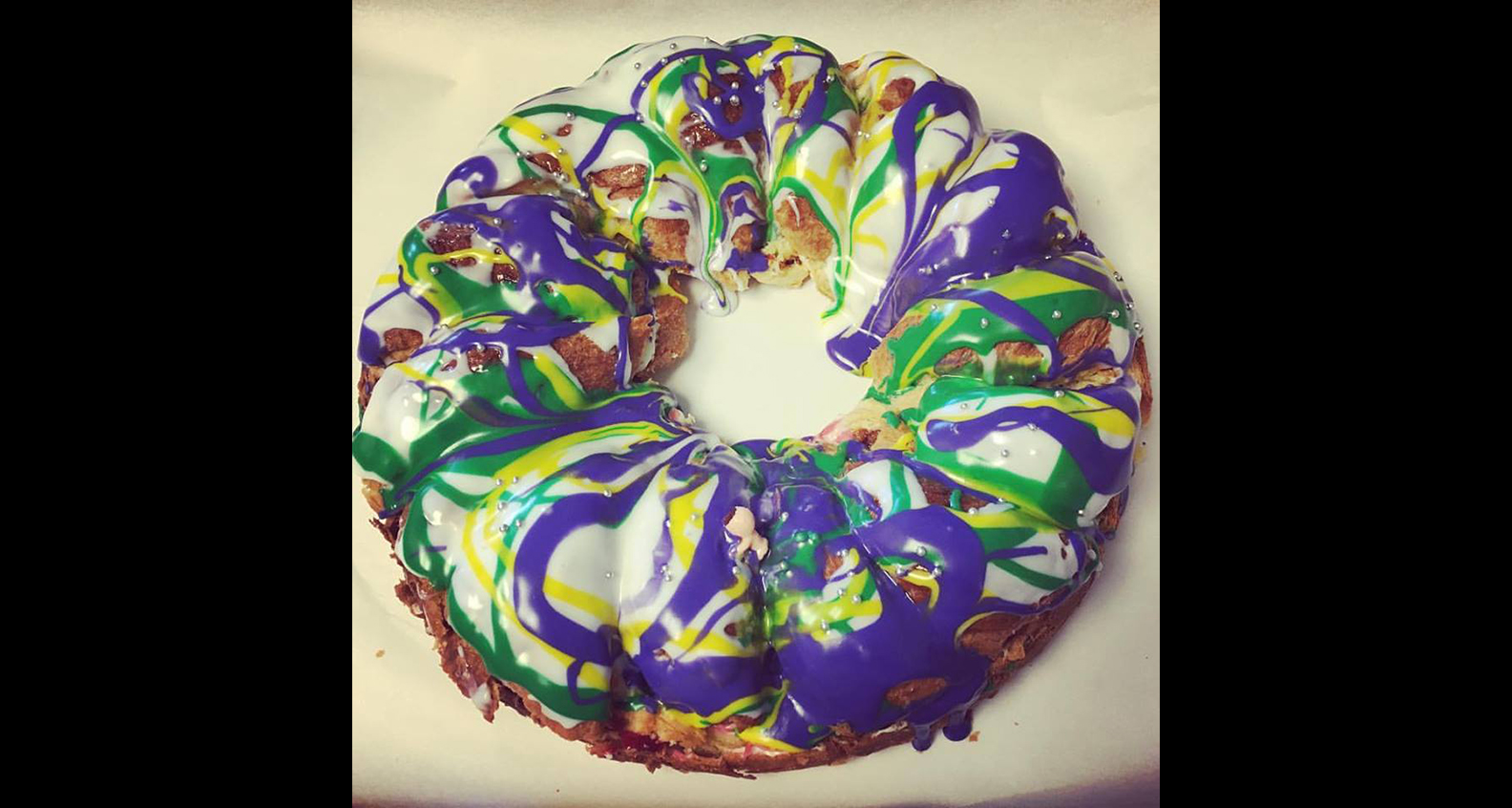 Sandra Bubbert has been baking up delicious Texan sweets for politicians and celebrities, such as Reba and Barbara Bush, since the 1990s. According to the Houston Press, Bubbert’s king cake recipe was passed down from her grandmother, who was a baker in St. Martinville, Louisiana. The no-frills cake has a croissant-like texture, and the green, gold and purple icing is marbled on top. 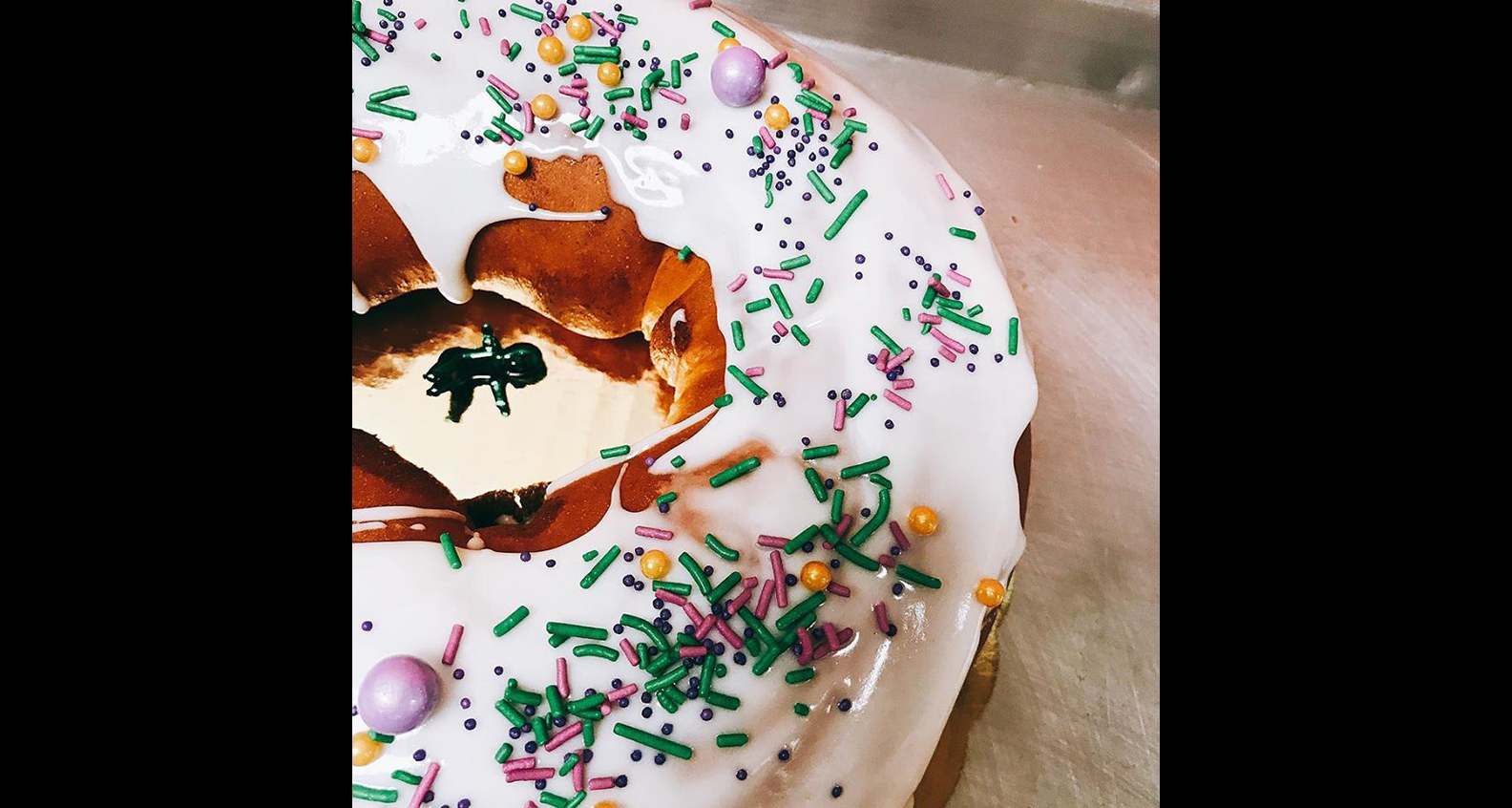 Forget about brightly colored sprinkles. At Gracious Bakery, king cakes are decorated with “fancy sprinkles” that give the king cakes a more sophisticated look. These classy cakes come in pecan praline and cinnamon flavors. 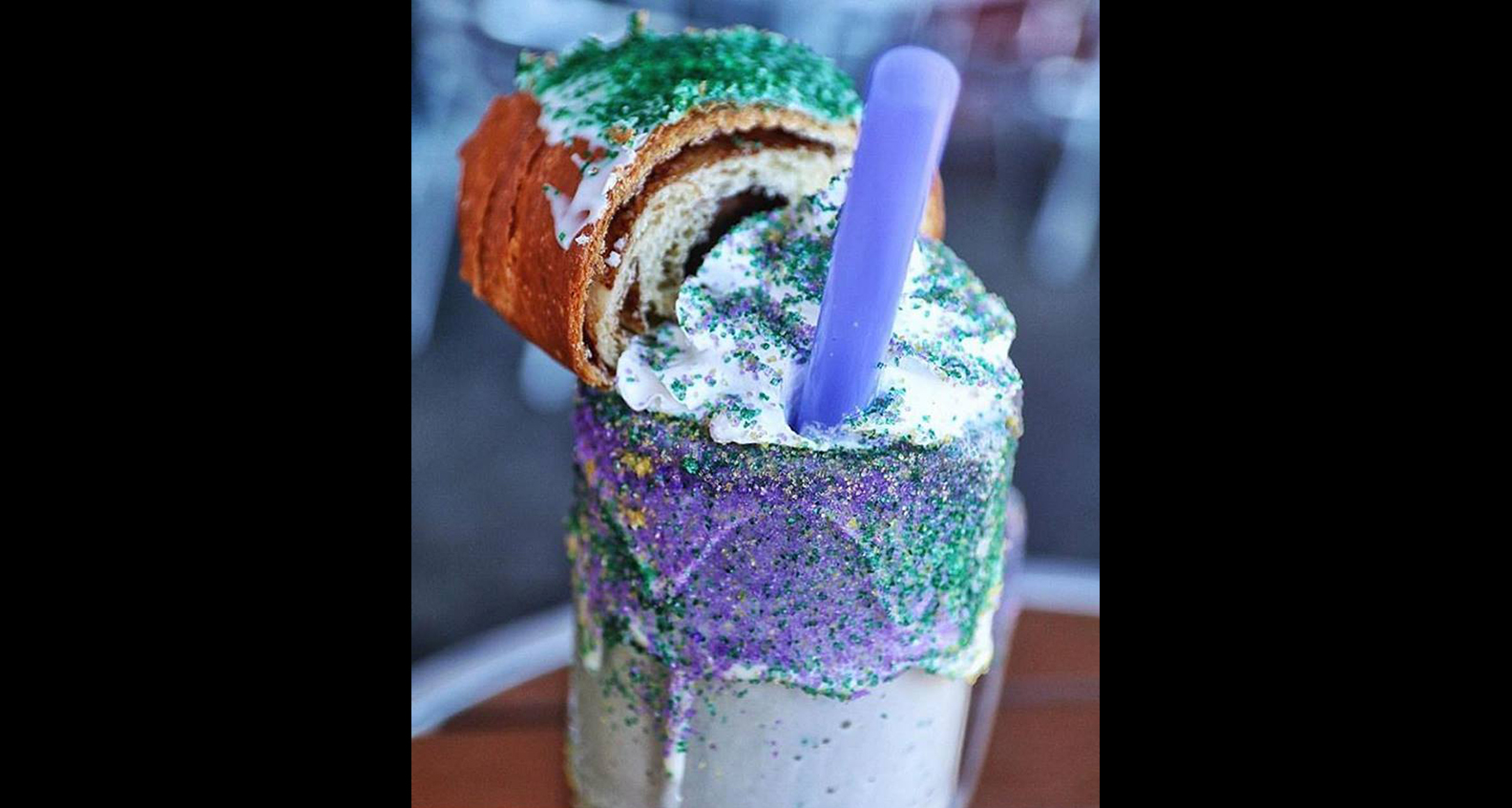 Frey’s is known for its barbecue, whiskey and milkshakes, so it should come as no surprise that during Mardi Gras, the restaurant whips up a king cake and ice cream concoction. In the cup goes cinnamon and vanilla ice cream with plenty of colorful sprinkles, and on top is a slice of Dong Phuong king cake. 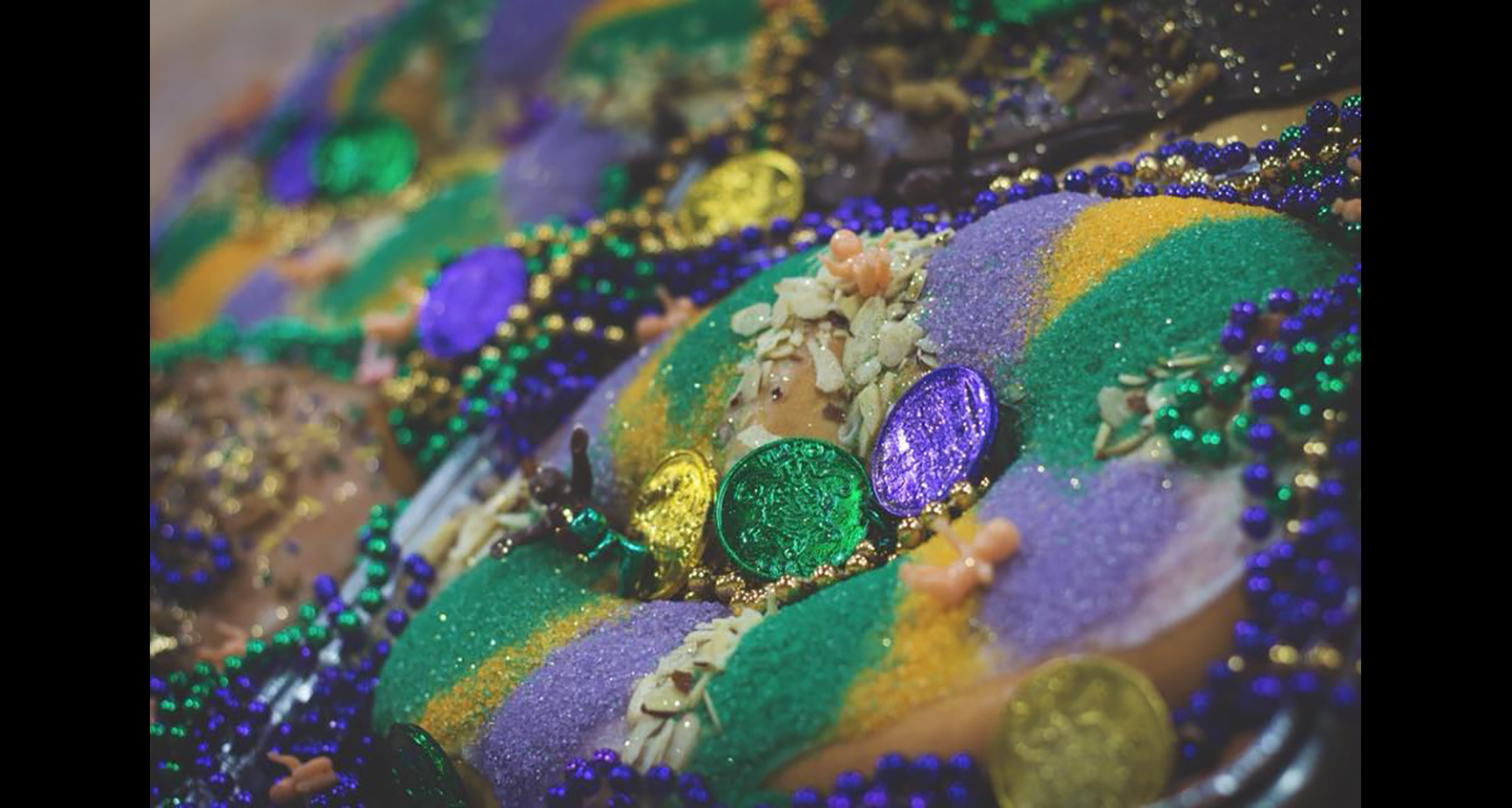 This bakery is known for being the first bakery to fill a king cake, and now customers have over 20 flavors from which to choose. Pecan praline, Mississippi Mud, and apple all sound pretty yummy to us. To keep the cakes fresh, they are shipped without any icing or decorations; customers can glaze and decorate their king cakes themselves. Paul's also makes sure to send along a Mardi Gras cup and Mardi Gras beads for a final touch. 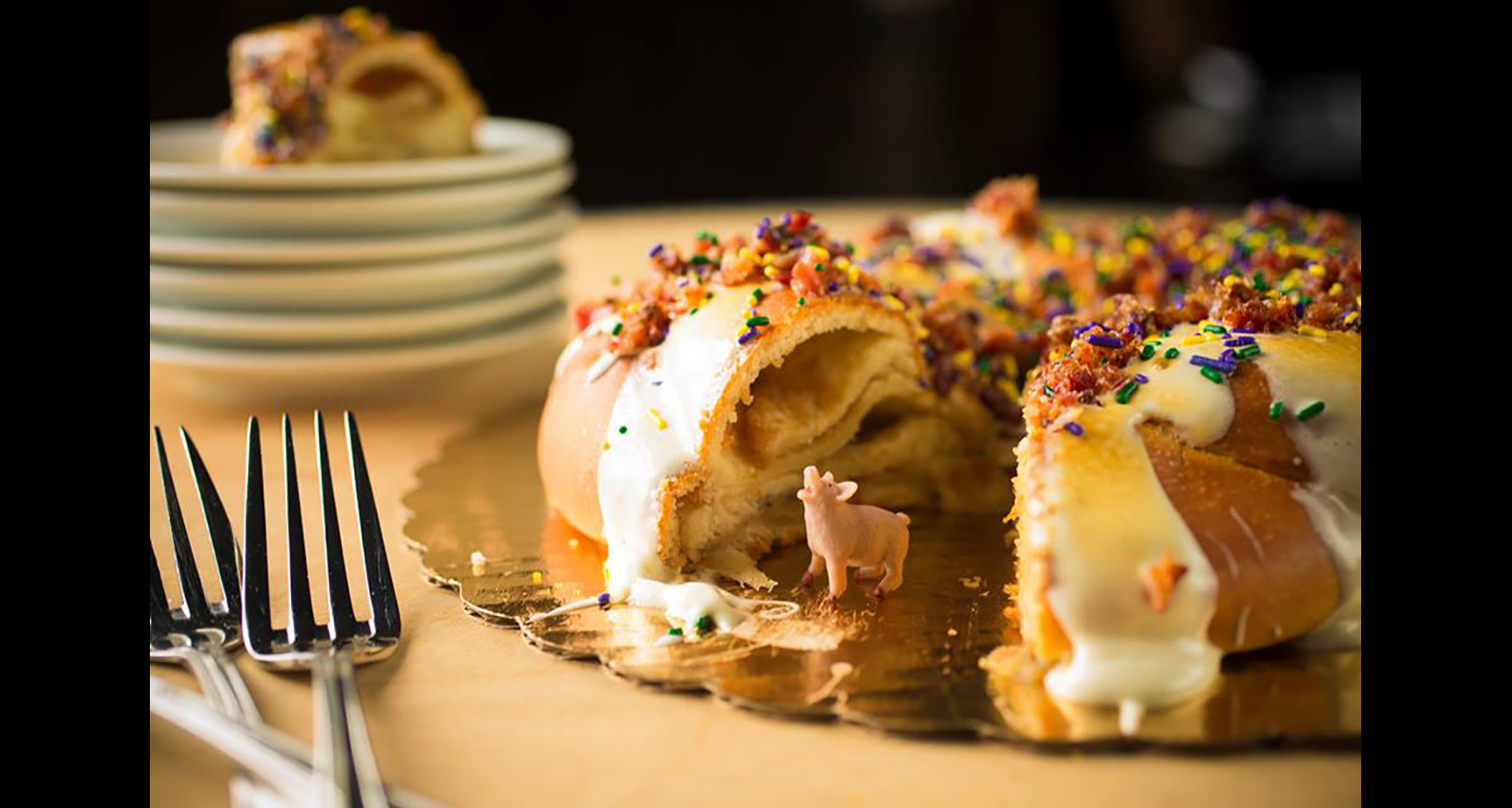 Cochon Butcher is all about smoked meats, so it’s no surprise that savory aspects make it into its king cakes. One of the standout flavors is The King, which is filled with peanut butter and bananas, and topped with bacon and toasted marshmallow. Instead of plastic babies, tiny pigs are hidden inside of the cake. 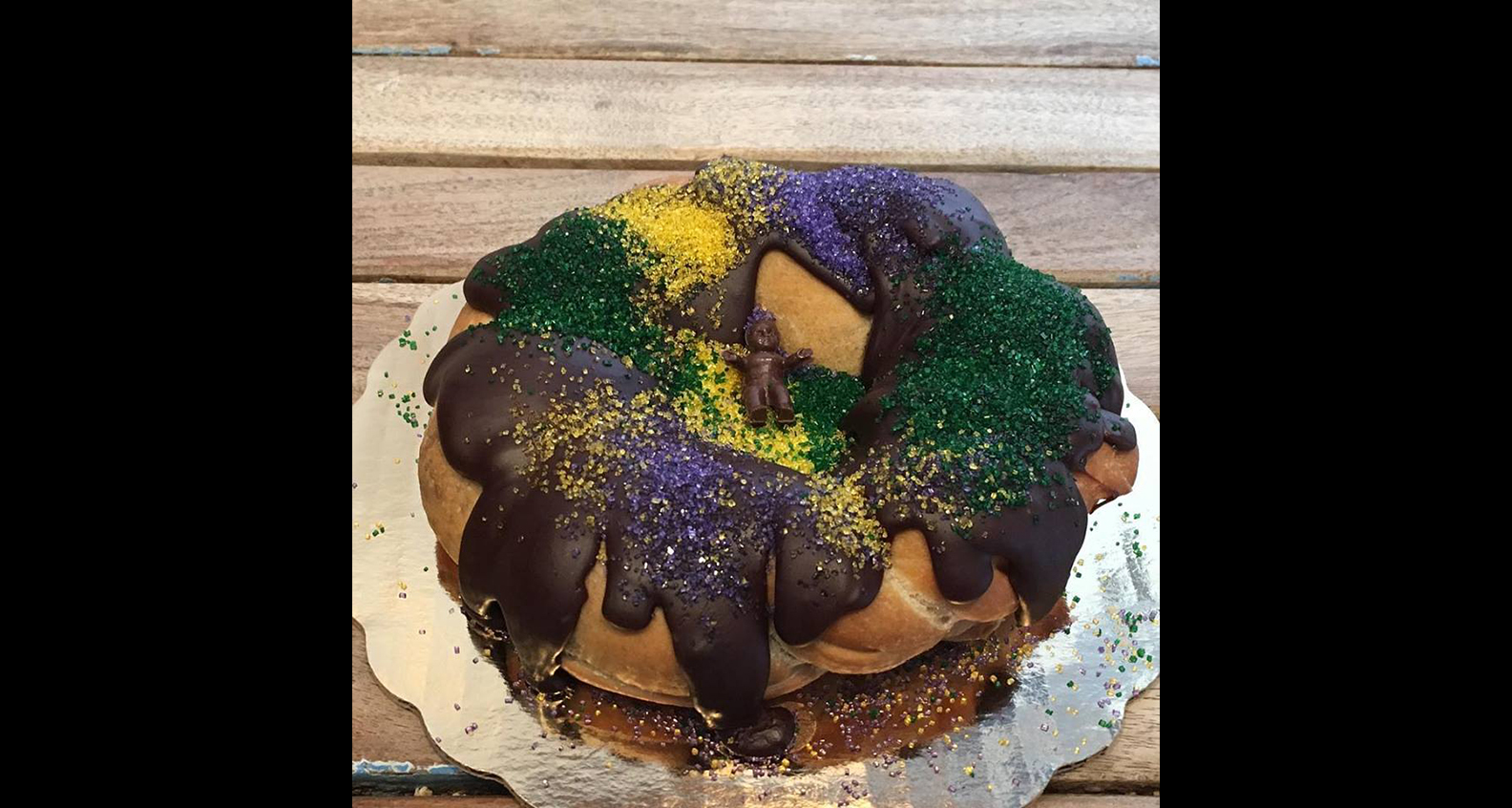 The chocolate king cake from Bittersweet Confections is perfect for chocolate lovers. Instead of classic vanilla icing, the braided brioche cake is drizzled with chocolate icing and colored sprinkles. 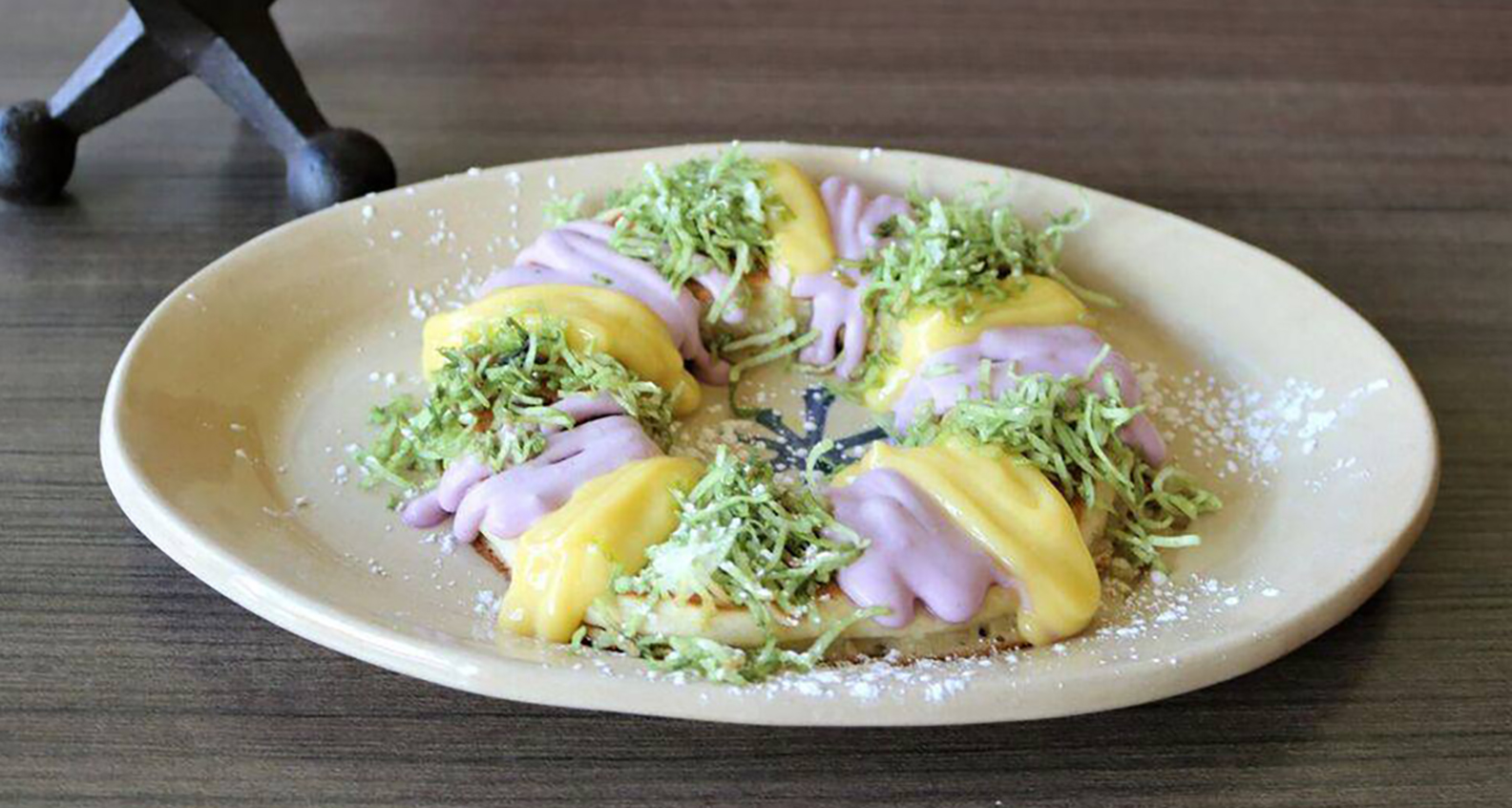 King cake pancakes from Snooze, with locations throughout Texas

This breakfast hotspot has some interesting pancake flavors, such as pineapple upside down cake and hot cocoa, but to get in the mood for Mardi Gras, Snooze is bringing back the king cake pancake. For one day only on February 13, it'll be serving ring-shaped white cocolate chip pancakes topped with green-dyed toasted coconut, lemon curd and blueberry mascarpone to make it look official. 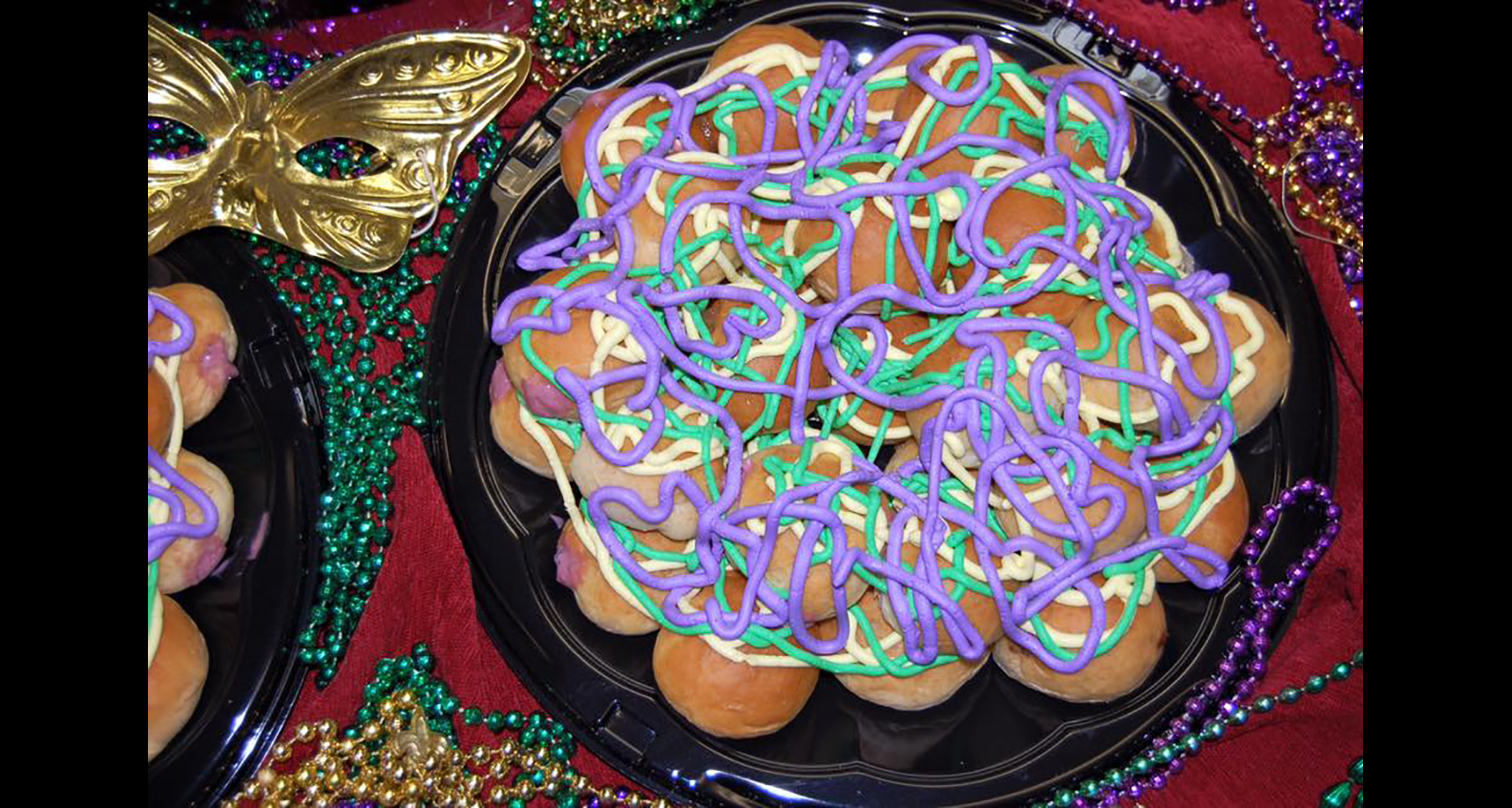 At Electrik Maid Bake Shop, king cakes come in delicious little bites instead of slices. Customers can choose from strawberry, vanilla, blueberry, chocolate, raspberry or cream cheese fillings. Grab them by the dozen or two for a snack at home or a Mardi Gras party. 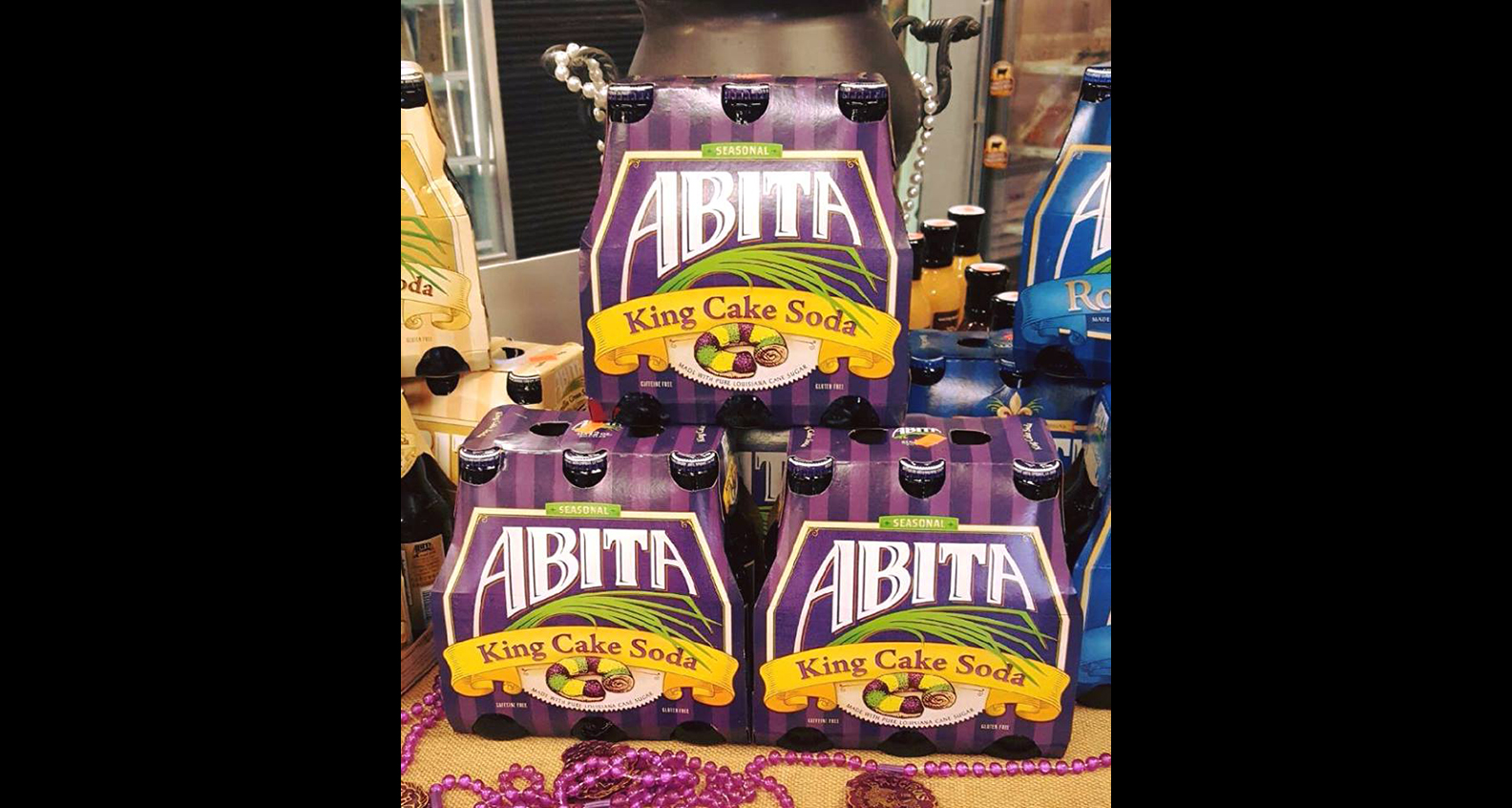 King cake is delicious to eat, so why not try it as a drink? (At least that's what Abita Brewing has thought.) The Louisiana-based brewery has created a soda that brings together all of the flavors of a king cake (candied sugar, frosting and cinnamon dough) in a bottle. If you're feeling adventurous, find out if you can buy king cake soda here. 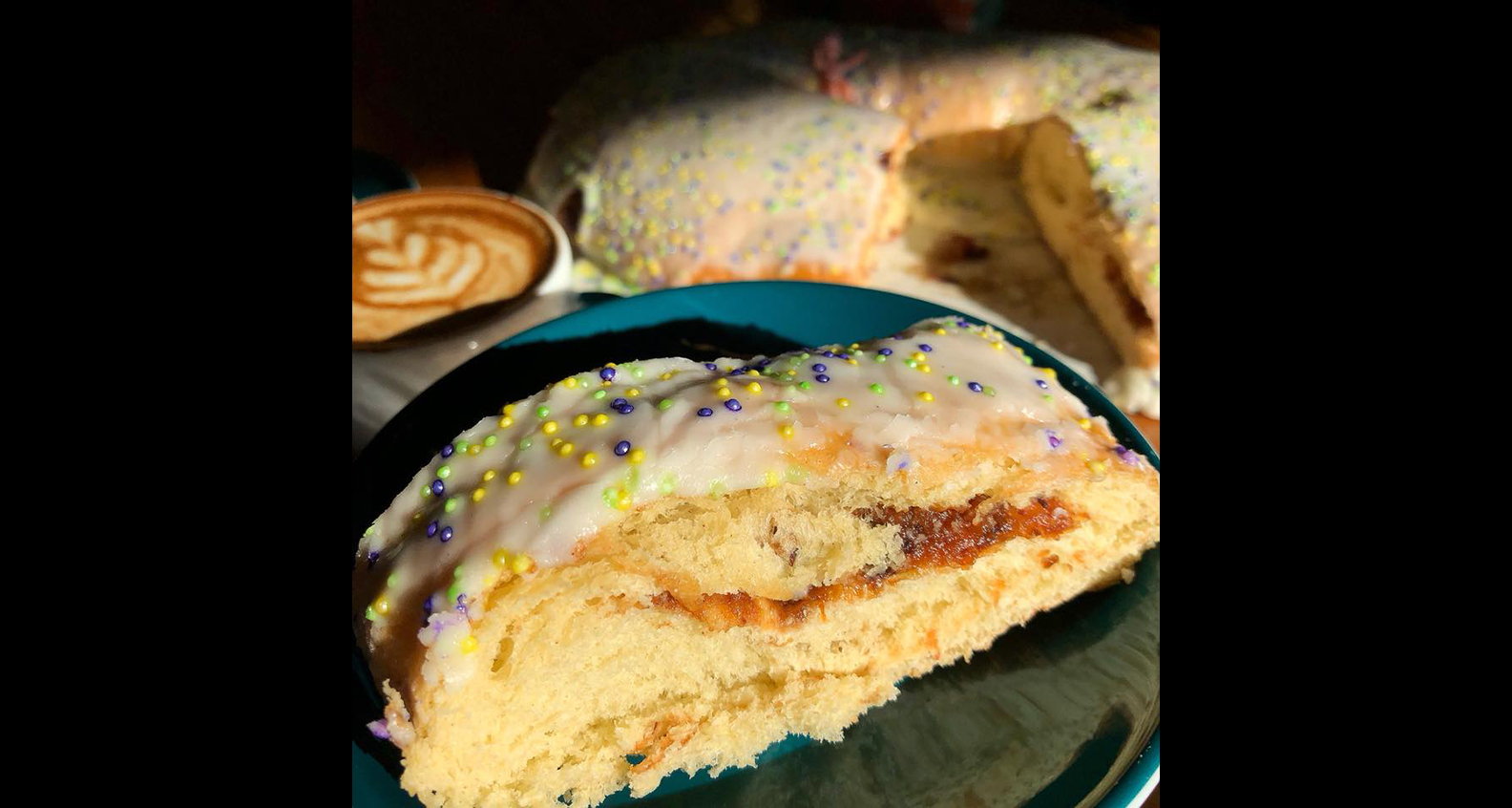 At District Donuts, the focus is usually on donuts, but during Carnival season, the bakery shifts to king cakes. This year they’ve created a cuccidati king cake, which is based on an Italian fig cookie. The filling for this speciality cake is made with fig, date, walnut, raisin, honey, orange and spices, and it is wrapped in an icing-topped brioche dough. 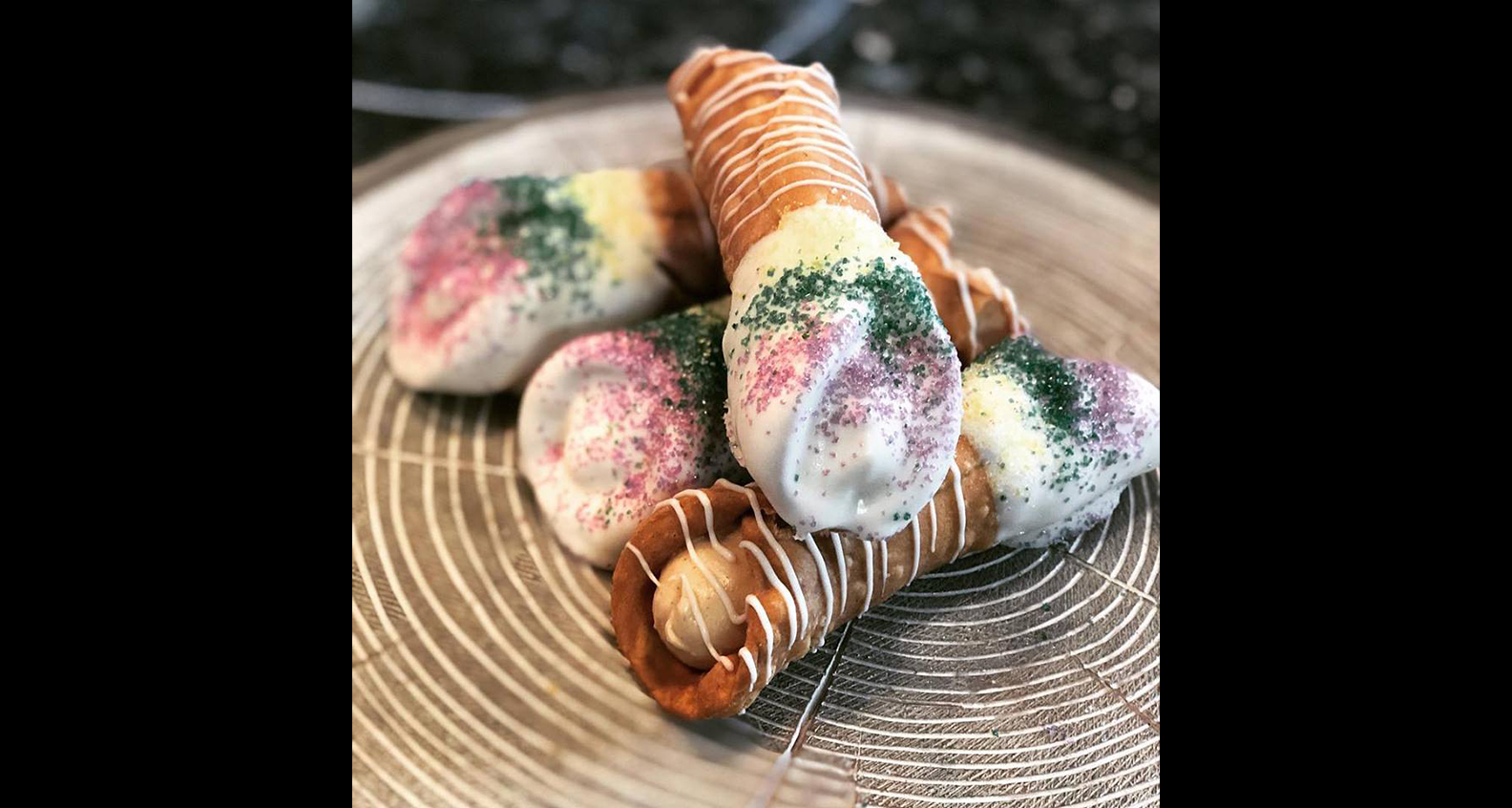 Not a cake person, but still want king cake? Uptown Downtown Bakery has the perfect solution. Its king cake cannoli is filled with a traditional cream filling and decorated with colorful sugar so you can still get in the Mardi Gras spirit. 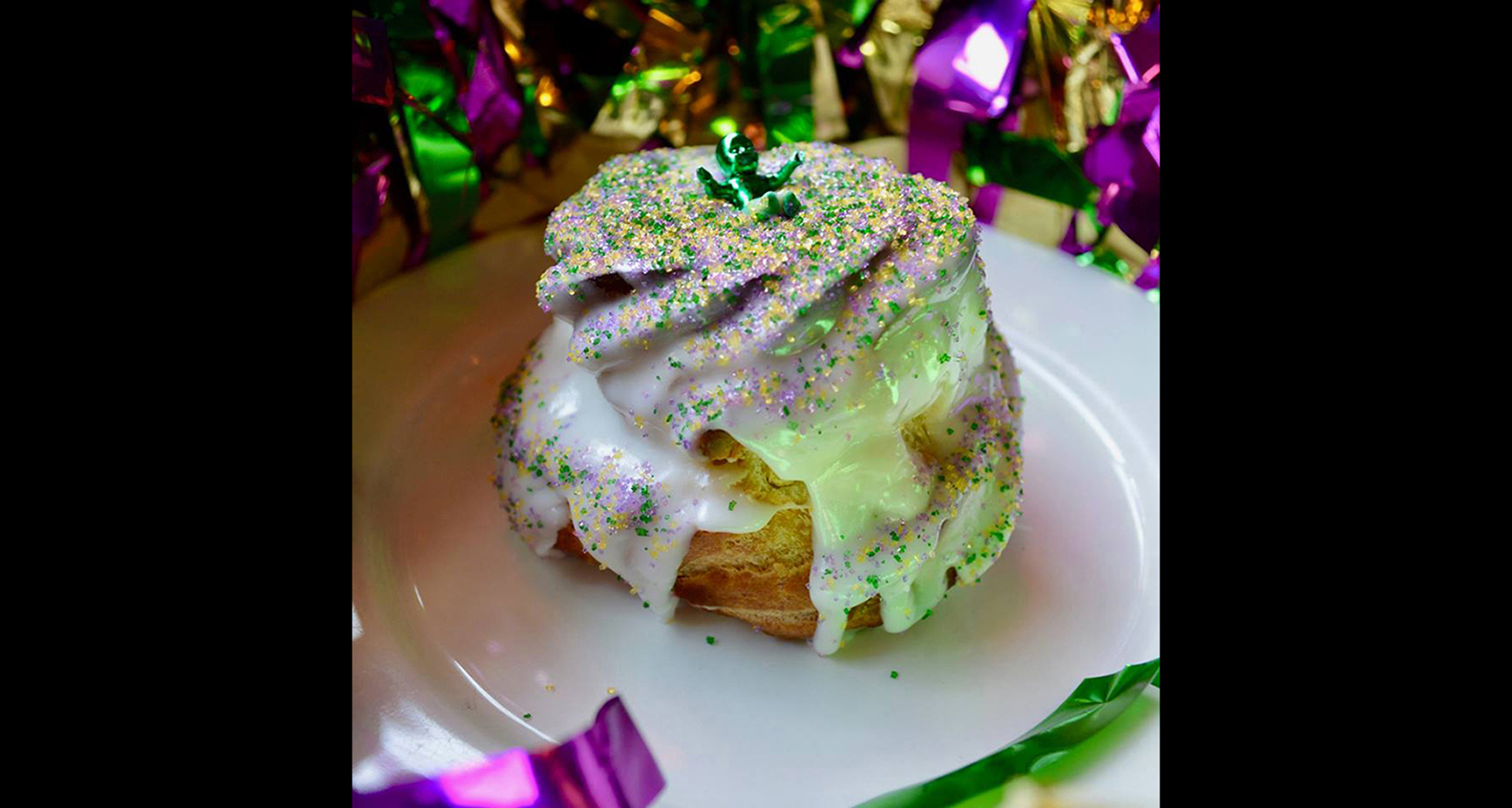 The chefs at Bourbon House create a new variation of a king cake each year. This year, the king cake pate de choux is filled with almond, orange and cinnamon pastry cream, and topped with almond icing and the traditional green, gold and purple sugar.  Don’t forget to order a King Cake Bevvy, a cinnamon, rum and vanilla ice cream concoction, with this dessert. 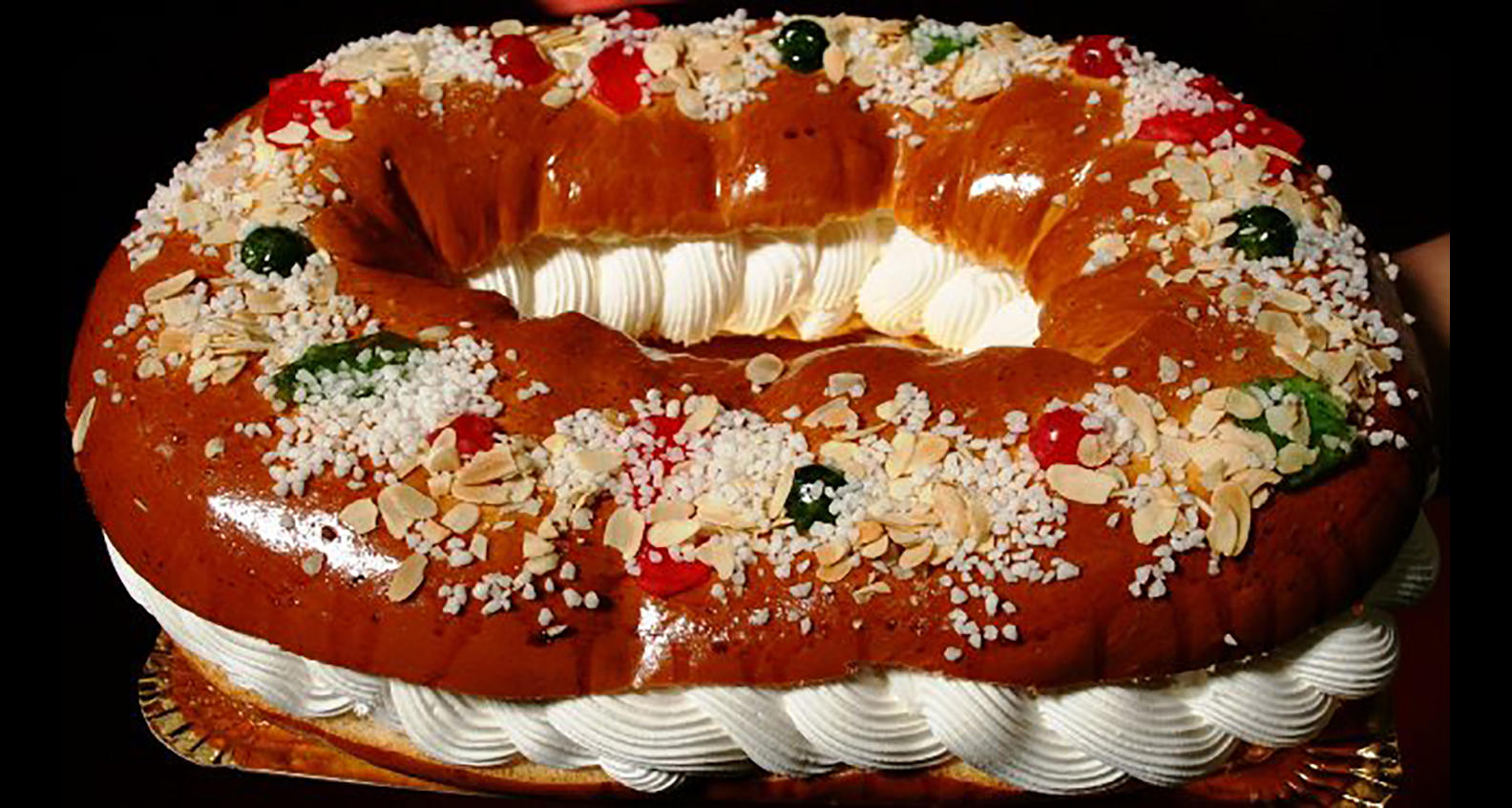 The roscón de reyes from Taberna de Alabardero is a traditional version of a three kings cake with a few different filling options. Customers can choose between plain, whipped cream or truffle as a filling.