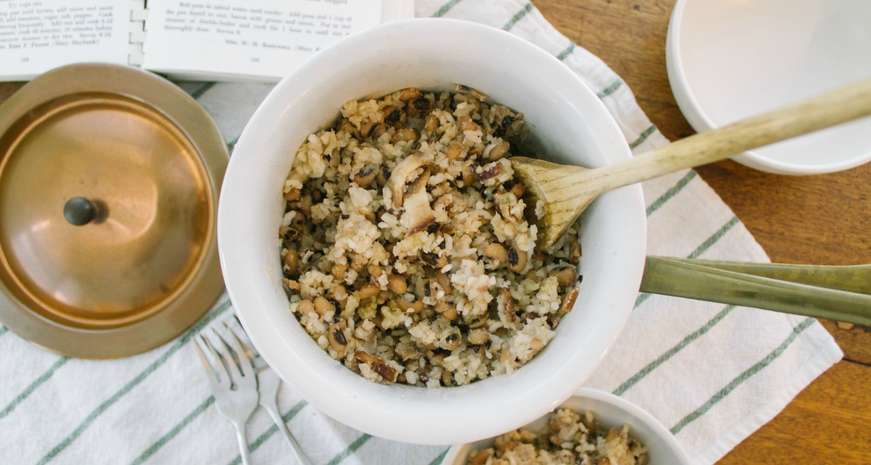 Don't cut corners in your Hoppin' John: Here's why it matters

It took me a long time to like Hoppin' John. When I was really young, I remember sneaking bite after bite into my napkin on New Year's Day to keep it good and hidden — at least until my mother did the laundry. As I got older and developed a taste for spicy foods, I'd drown out my obligatory bowl-ful with a combination of Pickapeppa and Tabasco, and I'd always mound far more rice than beans in said bowl. At some point, though, I must have eaten enough to finally make my taste buds accept, if not appreciate, the subtle flavor of commodity black-eyed peas and rice. But I still eat them with plenty of hot sauce.

I am not alone in this need to amplify the flavor of Hoppin' John. Most of us eat the dish once a year, and only once it has been dressed up with aromatics, pork products, chicken stock and spice. As food writer Robert Moss explained in his detailed history of our traditional New Year's dish: "Hoppin' John is the textbook example of how hard it can be to recreate the traditional dishes of the antebellum Southern kitchen, and it's not just a matter of recipe or technique. You can dig up old 19th century 'receipts' (as they were called back then), follow them to the letter, and still end up mystified that anyone could ever have loved such stuff, much less decided it was an iconic Southern dish. The problem with once-great iconic food often comes down to ingredients."

The technique of cooking rice and beans together came to America through the slave trade; you'll see variations in any country and region where enslaved Africans were taken. Moros y cristianos in Cuba, the pois et riz collé in Louisiana, Hoppin' John in South Carolina. Most historians point towards the Senegalese dish thiebou niebe, a one-pot meal of black-eyed peas or other field peas and rice, as the source of our Hoppin' John. Senegambians were sought after by slave traders in Charleston for their experience farming both rice and cow peas, wrote Michael Twitty in the essay, "The Transnational Dish of the Motherland: The African Roots of Rice and Beans," and those enslaved as domestics likely prepared the dish in plantation kitchens. 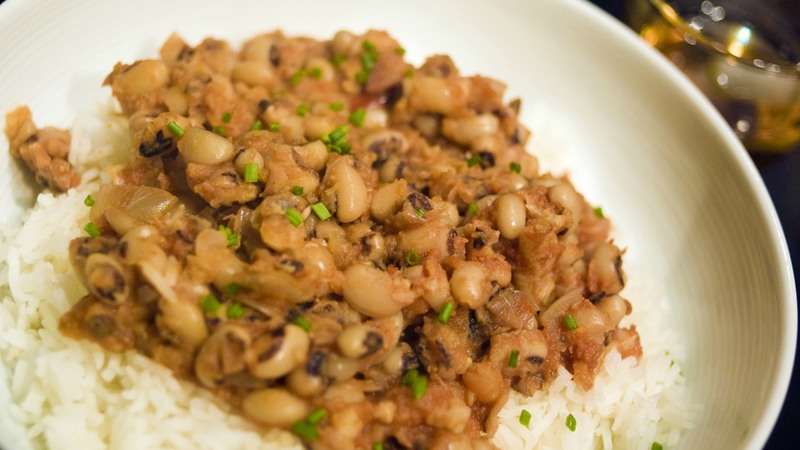 It wasn't until 1847, however, that a written recipe for the dish was codified, in Sarah Rutledge's "The Carolina Housewife":

One pound of bacon, one pint of red peas, one pint of rice. First put on the peas, and when half boiled, add the bacon. When the peas are well boiled, throw in the rice, which must be first washed and gravelled. When the rice has been boiling half and hour, take the pot off the fire and put it on coals to steam, as in boiling rice alone. Put a quart of water on the peas at first, and if it boils away too much, add a little more hot water. Season with salt and pepper, and if liked, a sprig of green mint. In serving up, put the rice and peas first in the dish, and the bacon on top.

Read closely, and you'll see that this Hoppin' John was not made with the variety of black-eyed pea with which we are familiar. The dominant field pea in the low country was a red variety, the Sea Island Red Pea, which has now been popularized by the likes of Anson Mills and Sean Brock. Far more flavorful and firm than commodity black-eyes, Sea Island Reds gave the dish far more character than you taste today. (Add to that Carolina Gold rice, again, a nuttier and more aromatic variety of long-grain rice, and you've already got a character-filled pot of food. Strips of bacon or ham hock or, really, any kind of cured pork that hasn't been injected with water and fed a diet of commodity feed, add even more character.)

However, as Adrian Miller writes in "Soul Food: The Surprising Story of an American Cuisine, One Plate at a Time," black-eyed peas managed to become the predominant field pea in the Southeast, and, eventually the United States as a whole. African-Americans from the Low Country who moved north during the Great Migration ended up substituting black-eyed peas for red peas, as these were what where available. 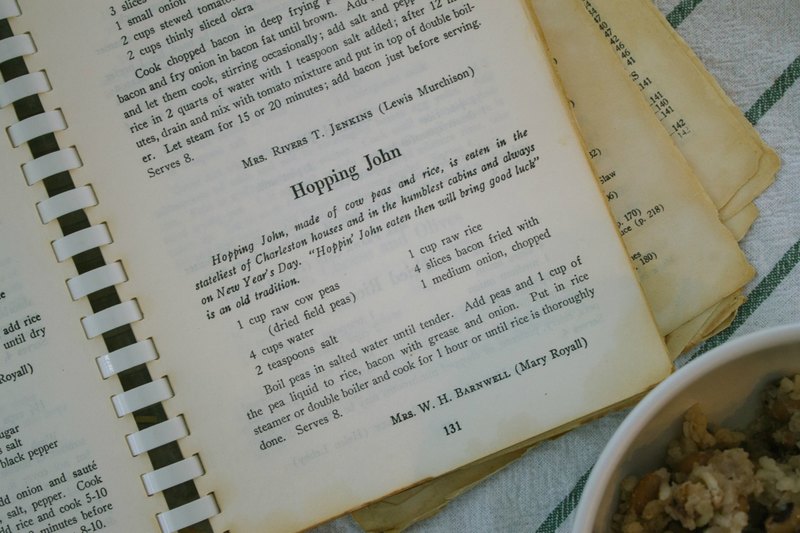 But even with commodity black-eyed peas, you can still make an old-fashioned Hoppin' John, and you don't need to build a fire. I dug up a mid-century recipe for Hoppin' John (spelled then "Hopping John") in an original copy of "Charleston Receipts." Like the Rudledge recipe, the dish is simple, adding only an onion to the original, and cooked all together in a single pot. The author, Mrs. W. H. Barnwell, calls for either a rice steamer or double boiler to finish the dish, allowing the rice to steam slowly among the boiled peas and bacon, and giving the whole dish a cohesive, and delicious aroma.

The original recipe works almost as written; however, I've increased the volume of water to cook the rice and added a note to add more water to the boiling peas, as well. If you choose to finish the dish in a double boiler, be sure to give the mixture a gentle stir every once in awhile to make sure each grain of rice gets cooked evenly.

Remember, though, the more flavorful the ingredients you start with, the better the final dish will turn out. Either way, I won't fault you for adding some hot sauce. 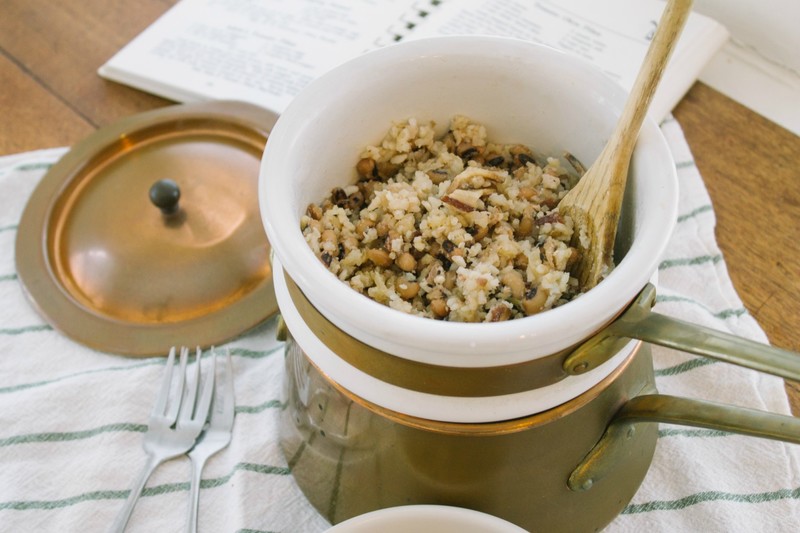 Old-Fashioned Hoppin' John
Note: The quality of your ingredients will really make a difference in this dish. Choose heirloom peas and rice, if possible, and make sure to purchase high-quality, flavorful bacon. Look for a bacon brand that does not include water in the ingredients list for best results.

Instructions
In a large saucepan, combine the water, peas and salt. Bring to a rapid simmer over medium-high heat, reduce the heat to medium low, and simmer until the beans are tender, 45 minutes to 2 hours, depending on the freshness of the peas. Add additional water to the pot, as needed. Remove from the heat and let the peas cool in their cooking liquid. Strain the peas, reserving both the peas and their cooking liquid.

In a fine-mesh strainer, rinse the rice until the water runs clear. Let the rice drain until mostly dry.

In a rice cooker or top pot of a double boiler, combine the peas, bacon-onion mixture and rinsed rice. Add 1 1/2 cups of the pea cooking liquid.

If using a rice cooker, follow the manufacturer's directions to cook the rice. Let the Hoppin' John rest for 10 minutes after the timer dings before serving.

If using a double boiler, fill the bottom pot of the double boiler with an inch of water. Place the bottom pot over medium-high heat and bring to a simmer. Cover the top pot tightly, adding a layer of aluminum foil if necessary, and place over the simmering water. Reduce the heat to low and cook, stirring gently every 10 to 15 minutes, until the rice is tender, 1 to 2 hours. Let the Hoppin' John rest for 10 minutes off the heat before serving.