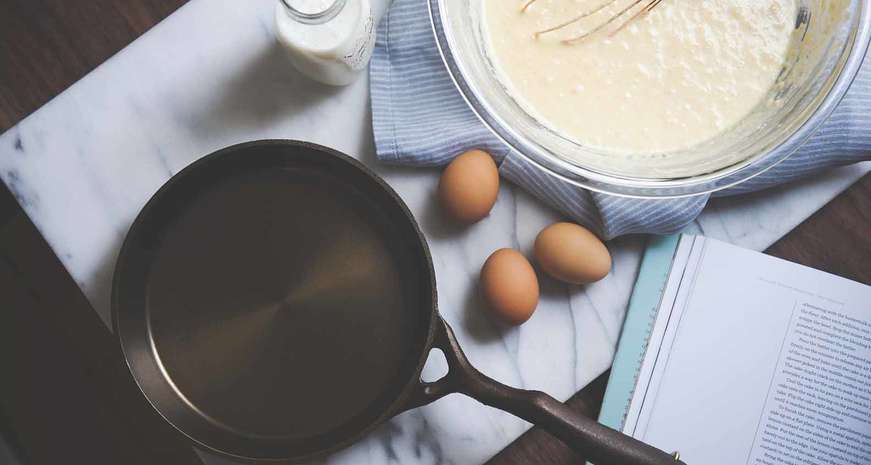 Cast iron cookware is one of those things people dare not insult in the South. If you were raised here, there’s a good chance you’ve had lots of family meals made, in some part or portion, in a skillet and/or Dutch oven crafted with the wonderfully low-tech, high-heat-retaining metal, so you know what it can do.

Cast iron makes dinner and especially breakfast foods entirely more delicious than they are in its absence. It appears humble, while it is in fact a culinary over-achiever that has survived various attempts at replacement by modern cookware design and technology. And once you learn how to manage and maintain your cast iron cookware, you start to realize how reliable and consistent it allows you to be in your kitchen. 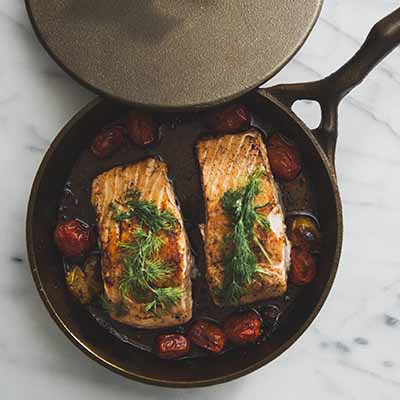 Today, with cast iron seemingly more popular than ever, people see their saucepans, skillets, tea kettles, griddles and roasters as more than just cookware — they’ve become cultural symbols of tried-and-true Southern cooking. And as we’ve realized that what was good for our grandparents is quite literally even better for us (if we cared for it and didn’t ruin the patina), we’ve come to appreciate their value enough to understand that a top-shelf cast iron cooking vessel is worth a somewhat-higher investment on the front end. You just have to look at the extra cash you’re spending on higher-grade cast-iron cookware like it’s actual food you’ll prepare in it: What you put in will always be worth more by the time it’s coming out.

Southern Kitchen is fortunate to have people on the team who know a bit about cooking in high-end cast iron, and are happy to help explain what you’re getting when you upgrade.

One is Josh Conner. As a graduate of the Johnson & Wales University College of Culinary Arts and alumnus of several influential Atlanta restaurants (see his bio below), he’s always a good resource of info when it comes not only to products but also recipes. Our other expert is Sean Pruett, who may not have the culinary arts degree but has over a decade of retail experience, and cures and smokes his own bacon at home. We trust these guys and you can too.

So how do you know what to spend, and what makes higher-end cast iron cookware worth the higher price? 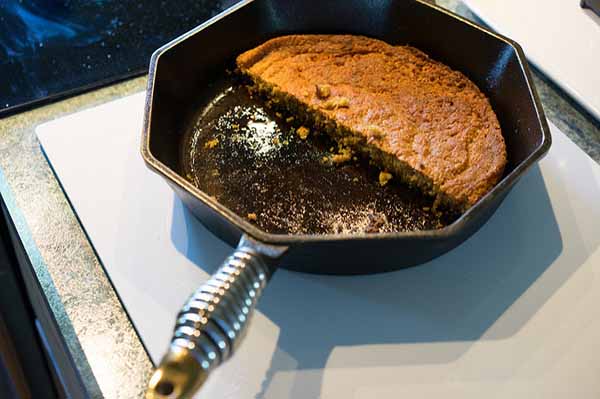 According to Josh, you should start by considering the manufacturer’s business motive. “These artisan skillets cost more than mass-produced ones cost,” Josh admitted, "but they truly are heirloom items that, with proper care, should outlive the person who buys it.” He said you should think of beginning-level pans as jacks-of-all-trades, calling them “not excellent, but serviceable.”

That’s not to say that he doesn’t appreciate the utility of mainstream cast iron that costs less. “I still cook with the first cast iron skillet I bought 18 years ago and it still performs admirably,” he said. “For the most part, many of the entry level cast iron skillets can do a pretty good job in most applications. If you need to shallow fry a chicken, pan-roast some spuds or sear a steak, these skillets will be perfectly acceptable in accomplishing these goals.”

Sean agreed. “Modern mass-produced cast iron will never perform like the old Griswold and Wagner’s your grandparents cooked on. Those skillets were produced using more time-consuming methods that produced a much smoother skillet. That’s not to say a modern mass-produced skillet doesn’t have a place, but there is a reason we’re seeing the growth of high-end, craftsman driven cast iron in the market.” 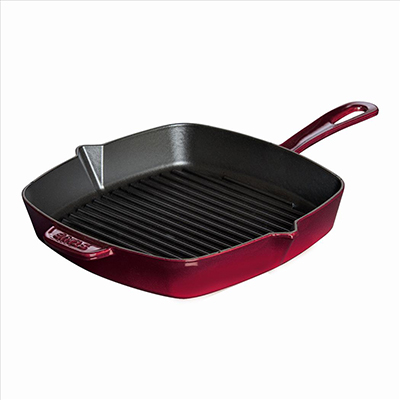 The design should also be considered. Everything about a cast iron kitchen product should feel trustworthy, not just hefty. The form and shape should work in proportion to the weight applied to your wrist as you handle it. Once you’re comfortable with how it feels when using it, especially if you’re new to cast iron cooking, you should find that it’s less-intimidating and actually adds confidence.

You'll also want to factor in what you like cooking at home before deciding on enamel versus non-coated cast iron. The biggest benefit of enameled cast iron is that it's pretty — you'll probably be able to find something in a color that matches your kitchen without much trouble, whether you're a Lodge loyalist or in the market for a fashionable Staub. Just be aware that you won't want to put your enameled cast iron on high heat (below 500 degrees is advised by Lodge), so outdoor cooking by campfire is no longer an option. Nor will you want to use metal utensils, or you'll damage the colorful frit coating. These items do allow you to cook acidic foods (tomato sauces and such) with more peace-of-mind, since it won't degrade the metal underneath. You can even use it for refrigerated storage without worrying what'll happen next time you heat it up. And clearly the maintenance is much easier — you can soap them up, and many models are even dishwasher-safe — but you're sacrificing the seasoning for convenience. 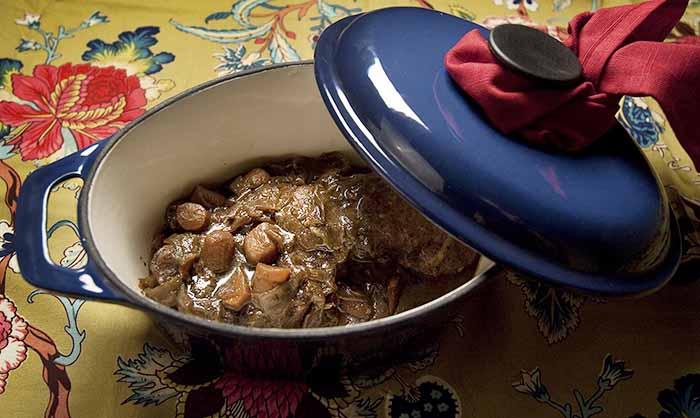 The main difference between general-use and higher-end cast iron, as Sean and Josh further agreed, is the extremely smooth cooking surface on the high-end enamel-free model, which lets the food have more contact with the hot metal and helps to achieve better results, especially with browning proteins. Cast iron products with grittier surfaces tend to be easier on your pockets, but this makes the task of creating a flavor-rich patina – that reflective layer of broken-down oils across the bottom of a well-maintained pan, also known as “seasoning” – a bit more time-consuming.

Not long ago Josh got a premium Smithey cast iron skillet with a polished interior, reminiscent of the heirloom pieces that are traded so fervently online. “That thing is amazing,” he said. “As I have continued to use Smithey and the seasoning has developed into a beautiful black patina [the reflective sheen across the bottom of a well-maintained surface], the non-stick properties are as good, if not better, than the true nonstick pans that I have. My original model has had 18 years’ worth of use and it’s seasoning is perfectly fine for most things, but that polished surface in the premium brand is what sets it apart.” 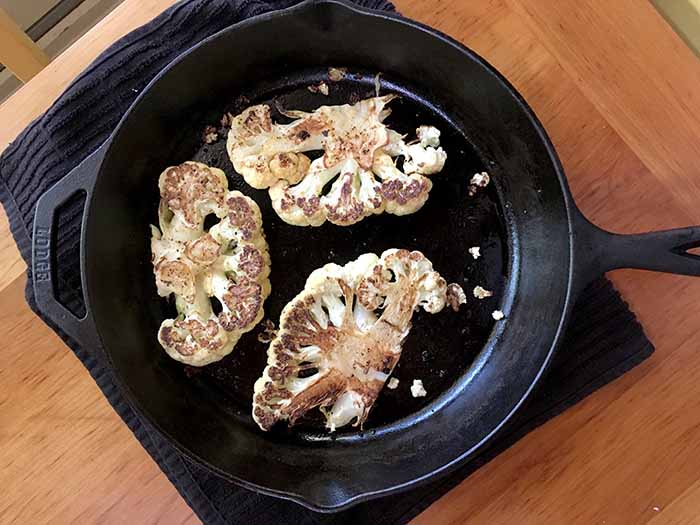 Both Josh and Sean have their favorite foods to prepare in cast iron, although they vary depending on whether he’s using more-sophisticated cast iron or not. “If I’m cooking something a little fancier, I reach for my nicer skillet and pan-sear sea scallops," Sean said. "Nothing beats the good hard sear that the cast iron gives the scallops, but you really need a nice slick surface to make sure the scallops don’t stick, so make sure your skillet is very well seasoned. I’ll use fresh sage from my garden to make a sage-infused brown butter, and after searing the scallops for about a minute on one side, I flip them over and baste them in the brown butter for about three minutes to finish off the cooking."

Still, Sean’s favorite dish to prepare in cast iron is chicken thighs, and he still uses a standard-grade skillet to make them. “Start with a nice hot skillet and a little bit of oil on the stove top to get a good crust on the skin, then transition to the oven to finish off. One of the great properties of cast iron is that, unlike stainless steel, the entire skillet gives off heat, so you end up cooking the chicken from three sides. Serve them up with some Carolina Gold rice and a nice pan gravy made from the drippings, and you’ve got one heck of a good meal.”

“I’ve found that the level of production quality of the inexpensive cast iron cookware is a great starting point for your beginning forays into cooking with cast iron,” Josh said, “but as your skill level increases, so should the quality of the tools that you work with. Not only will you get better results in your kitchen, but due to the superior longevity of cast iron, these heirloom pieces can be enjoyed for generations.” 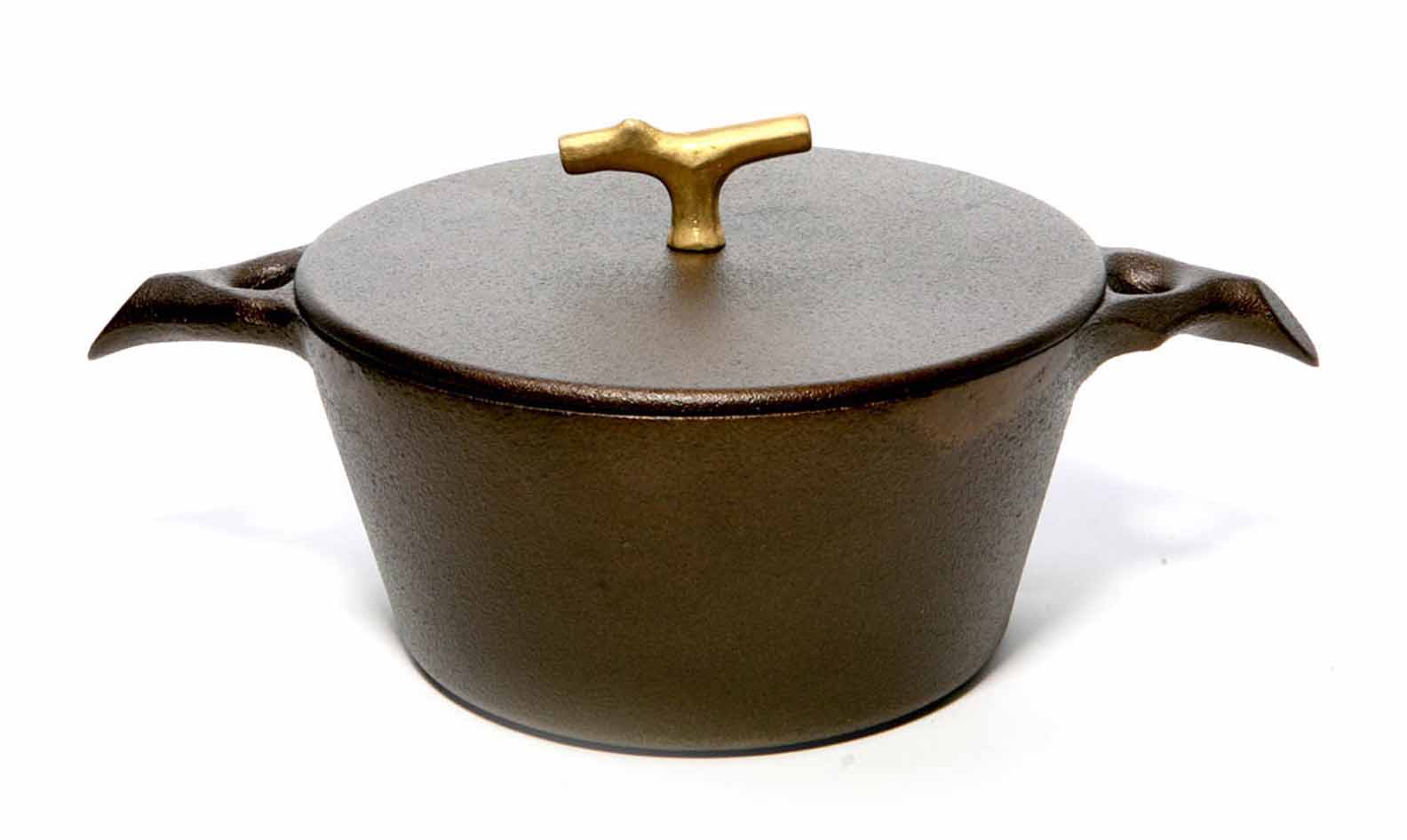 Josh prefers a thick-cut ribeye in his cast iron pan. “The reason is not just because the steak gets a great crust from direct contact with the pan, but all the flavor left on the pan after the steak has finished cooking lends itself to a number of different sauces to accompany the meal.”

He says his favorite trick is using both the interior and exterior of two cast iron pans – one slightly smaller than the other. “Heat the smaller one in a 400-degree oven for 20 minutes. Spatchcock a chicken and season it liberally with your favorite seasoning salt. Heat the larger skillet over medium-high heat, lightly coat it with oil and place the chicken inside, skin-side-down. Pull the other skillet from the oven and lightly coat the bottom of it with oil. Place it on top of the chicken, bottom-down, and place it all in the oven for 25 minutes, or until an internal temperature of 165 degrees is reached. The added weight of the preheated skillet on top decreases the cook time by almost half, and also presses the skin side down onto the larger skillet, producing a wonderfully crispy skin.”

Ultimately your cast iron cookware purchase should be personal. You know what you like, and you know what works well for what you want. Knowing the differences gives you an edge in perfecting your favorite cast iron-friendly meals, so have a look around before you make your next purchase. With so many companies now competing for shelf space (not only in stores, but eventually your kitchen), it never hurts to know as much as you can about the range in value of cast iron cookware to make sure the dollars make sense.

“Each of the brands is taking their own approach,” Sean summarized, “but they all have the same goal: Produce a skillet that has the same heirloom quality of those great skillets of past generations.”