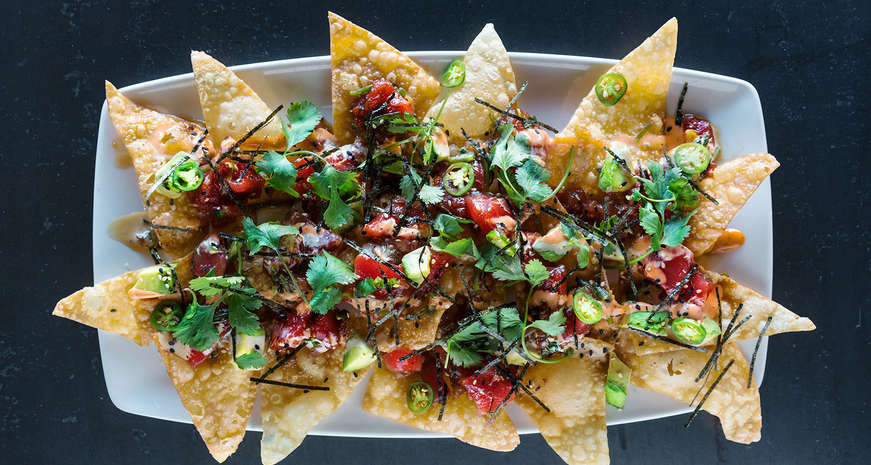 Dining in the new home of the Braves

Spring brings the return of baseball, and this season will be a big one in Atlanta, thanks to the completion of SunTrust Park, the new home of the Atlanta Braves. The modern, 41,000-seat stadium, though smaller than the Olympic-sized Turner Field, will be full of fancy new amenities that fans new and old will surely enjoy. But it’s the food and drink options that have us already hungrily humming “Take Me Out to the Ball Game.” 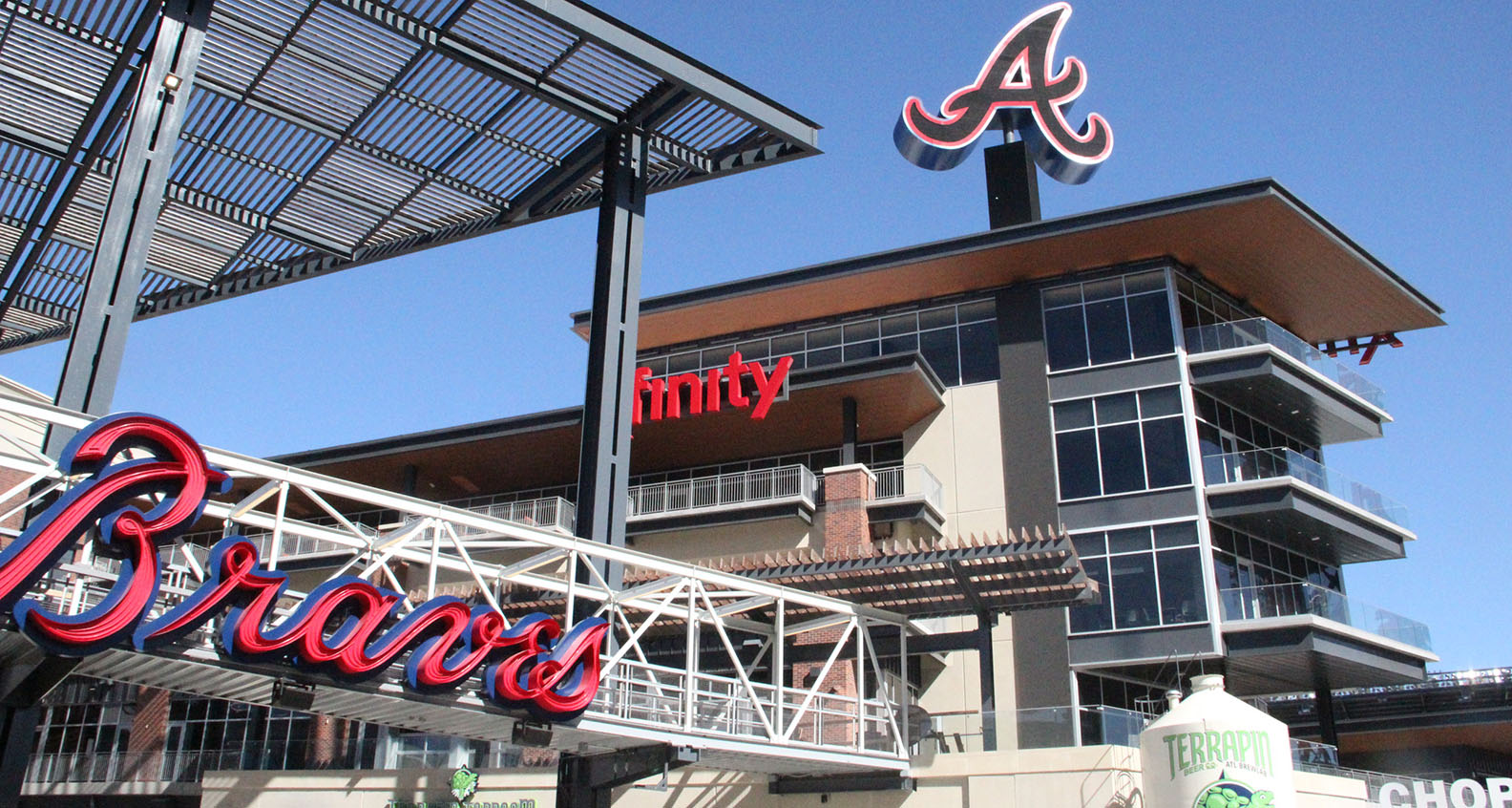 SunTrust Park will be home to The Battery Atlanta, a residential, office, retail and restaurant space constructed just outside the stadium. Inside The Battery will be restaurants from some of Atlanta’s most revered chefs, offering a diverse array of unique dining options and creating an updated drinking and dining experience for those ready to consider upgrading their traditional ballpark favorites. 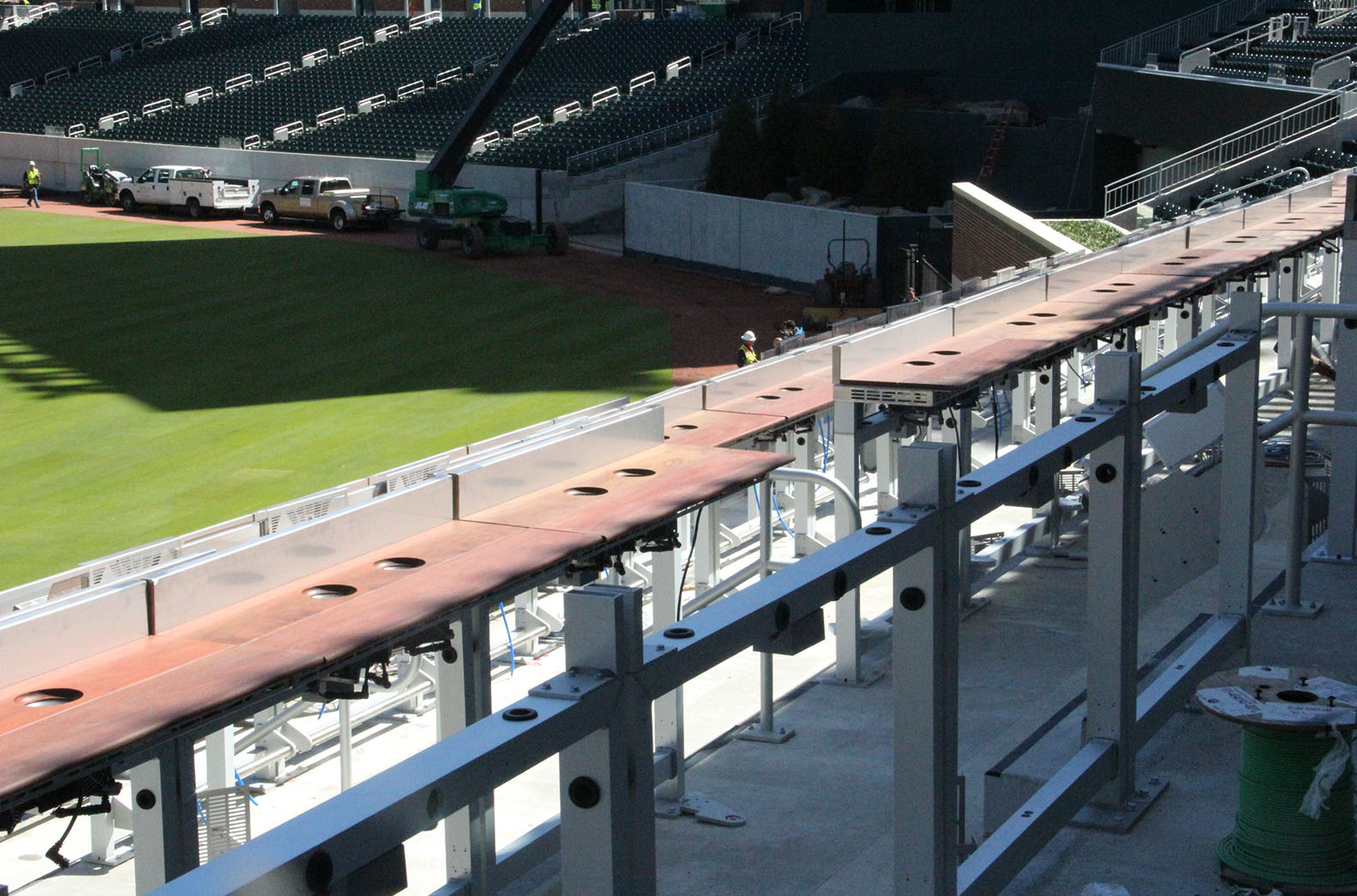 One of the chefs is Todd English, whose Todd English Tavern will be part of Live! at the Battery Atlanta, the destination’s main dining and entertainment district. Centering on wood-fire-grilled meats created in an open kitchen, the Tavern will serve what English called “neo-bistro” food. He says the focus will be on “interesting elements of food and international flavors, but localizing them” by using local ingredients and indigenous cooking techniques in order to give them a different culinary style.

English was raised in the Sandy Springs suburb of Atlanta. A true celebrity chef (how many others have ever been named one of People magazine's 50 Most Beautiful People?), he's been both a host and a judge for two separate PBS cooking shows, and has more than 15 restaurants around the country and beyond, including one in the Philippines.

Now that he’s bringing one to his hometown, it's fitting that it’s in the Braves new stadium: Prior to attending Culinary Institute of America he had a baseball scholarship to attend North Carolina’s Guilford College. Now he’s combining his chosen path with a pastime that might have become a profession. 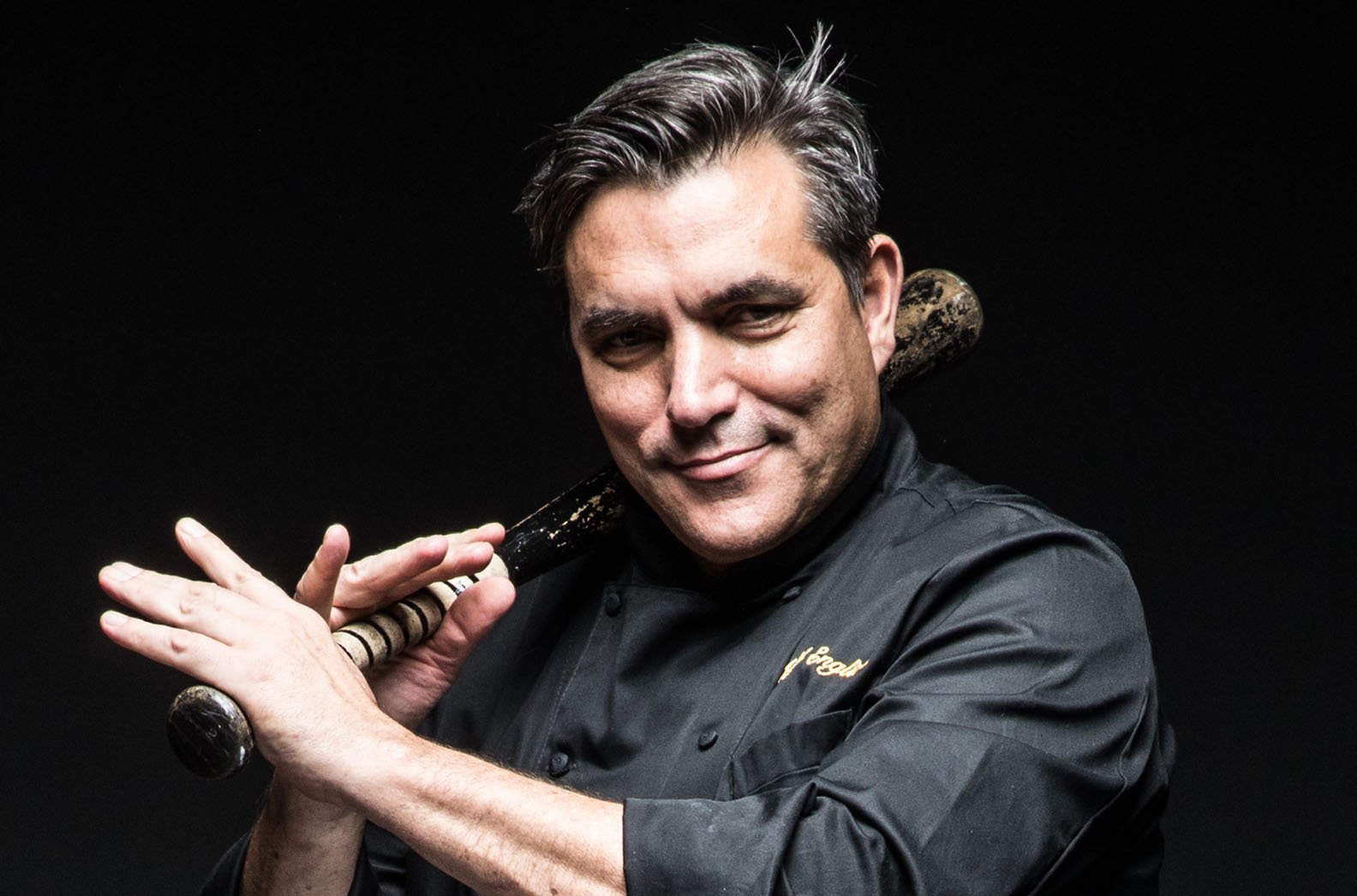 English is testing items for the new menu now, experimenting in order to create a new experience for Braves fans, instead of simply bringing over the menu from one of his already successful restaurants (which we probably wouldn't mind anyway, to be honest). Some of the dishes he'll be trying out will include duck prosciutto flatbread, a duck burger and Heritage pork belly, among others. [Read to the bottom of the story; Todd English shares an exclusive recipe from Todd English Tavern: Squash-Baked Macaroni]

“What I love is to take common ingredients and present them in an uncommon way,” English said, speaking about his culinary style. “Neo to me means taking it out of its element and remixing it a bit, like music and fashion, but keeping to the traditions that we still stand by, this being Atlanta. Taking that Southern tradition and bringing it into a different direction. It can be serious, it can be simple. Never taking ourselves too seriously, but then again being disciplined about what we’re doing and having fun with it. And it’s a fun environment!”

Chef and cookbook author Hugh Acheson is another one of those big names. The James Beard award-winner, Top Chef judge and Empire State South restaurateur will bring artisanal hot dogs and sausages to both The Battery and inside the stadium with his First & Third Hot Dog & Sausage Stand. 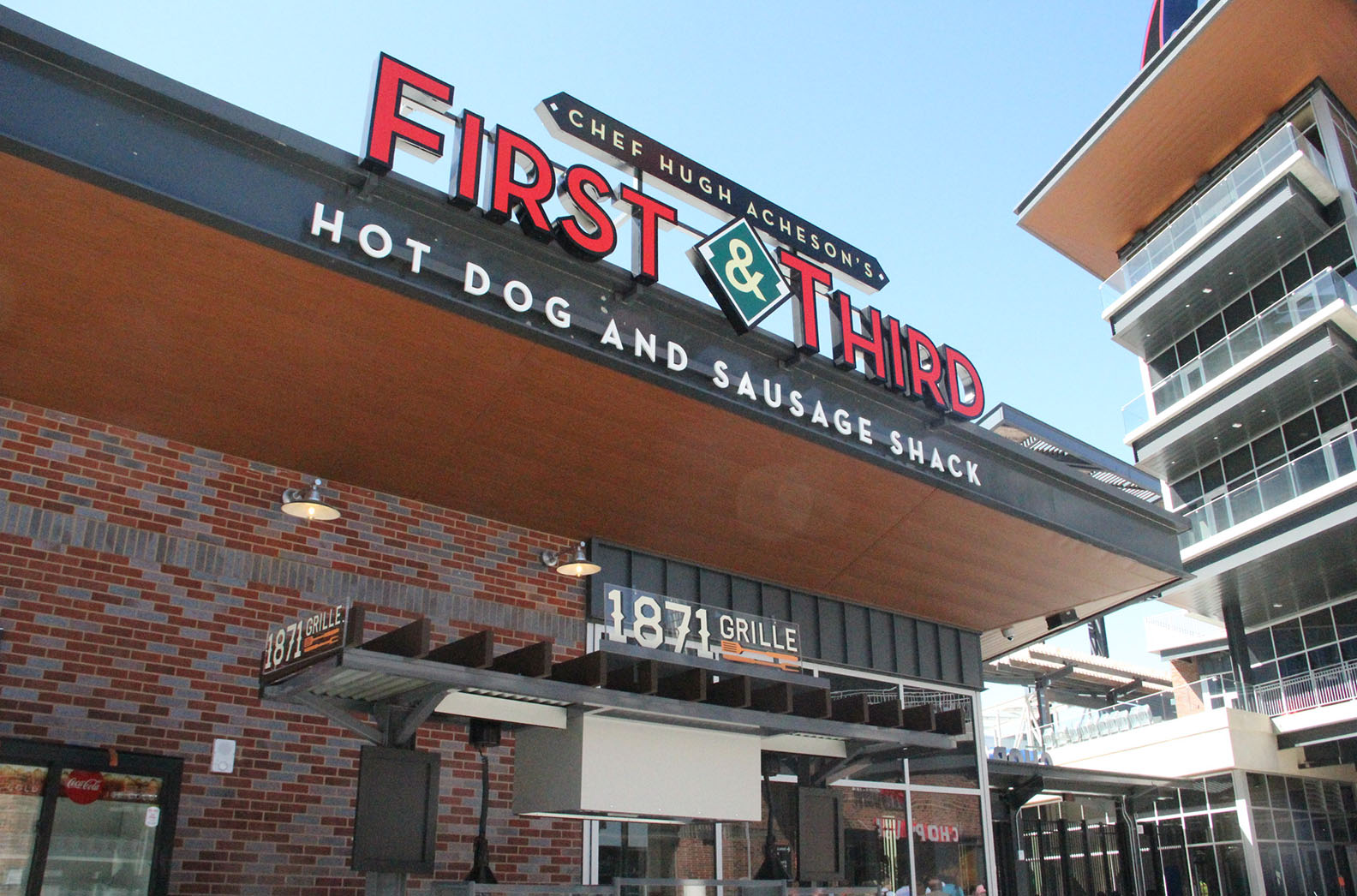 Menu options will include merguez and andouille sausages sourced from Patak Meats, which specializes in European styles of meat and is located just 12 miles southwest of the stadium in Austell, Ga. In addition to First & Third, Acheson is also a “culinary partner” in Punch Bowl Social, a two-story bar and entertainment complex with a variety of gaming (bocce ball, vintage arcades, bowling), private karaoke rooms a large circular bar and a 2,200-square-foot rooftop patio. He plans to bring southern flair to Punch Bowl’s burgers, sandwiches, salads and more.

Other popular chefs who’ve signed on to have their own spaces at The Battery include Linton Hopkins of Restaurant Eugene and Holeman & Finch, and Ford Fry, whose family of restaurants include The Optimist, JCT. Kitchen, St. Cecelia, Superica and others. Fry will open the second location of Tex-Mex restaurant El Felix, and Hopkins, taking things up a notch from his heralded cheeseburger offered to Braves fans at “The Ted" ,will open a steakhouse named C. Ellet’s, named after his great-grandfather. 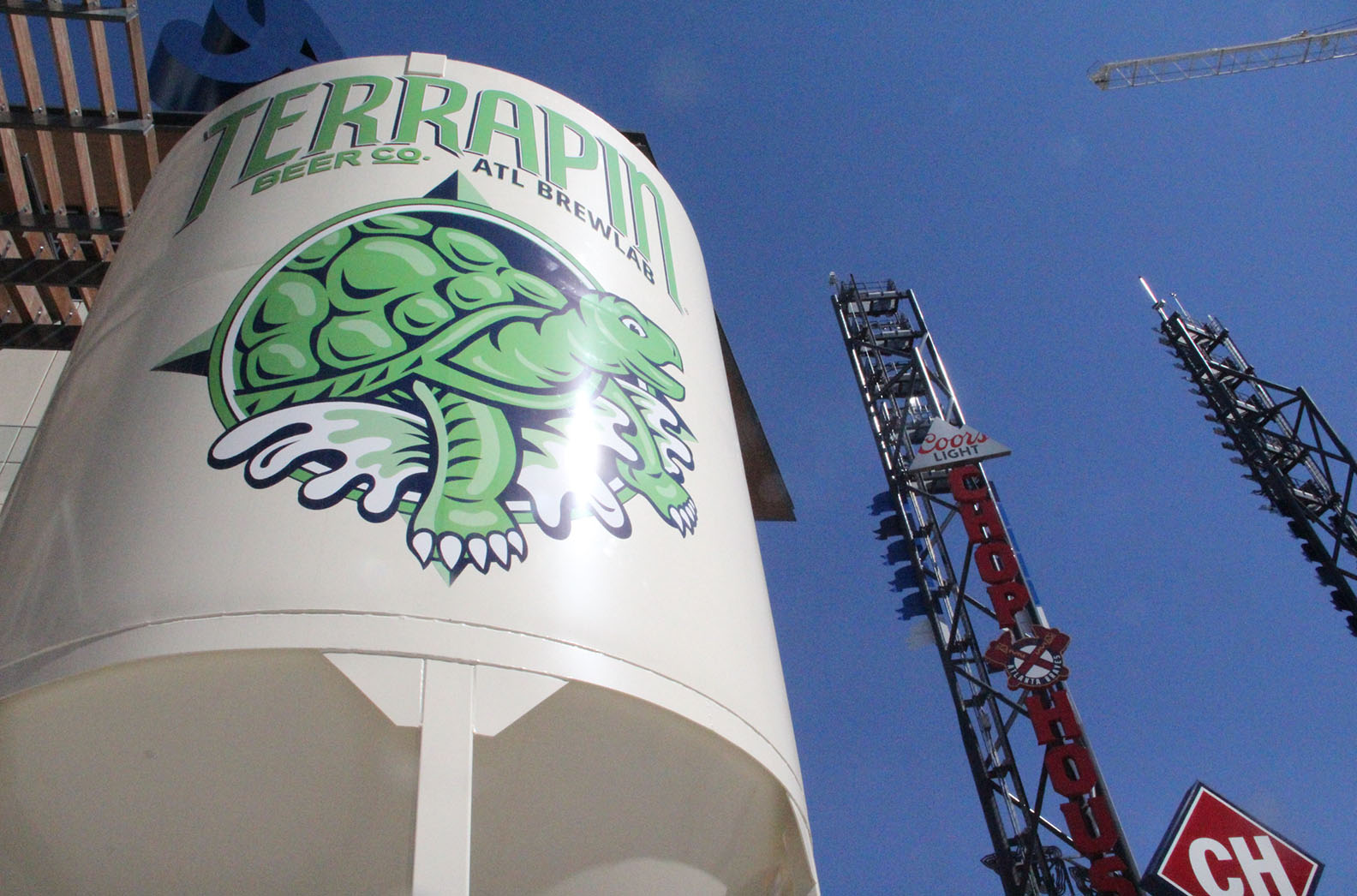 The comfy options will continue at Terrapin Taproom, where the Athens-based craft beer brewers will offer small batches of experimental beers created in the on-site ATL BrewLab and not available outside the stadium. Favorite Atlanta barbecue restaurant Fox Bros. will provide their famous sauced-and-smoked meats. 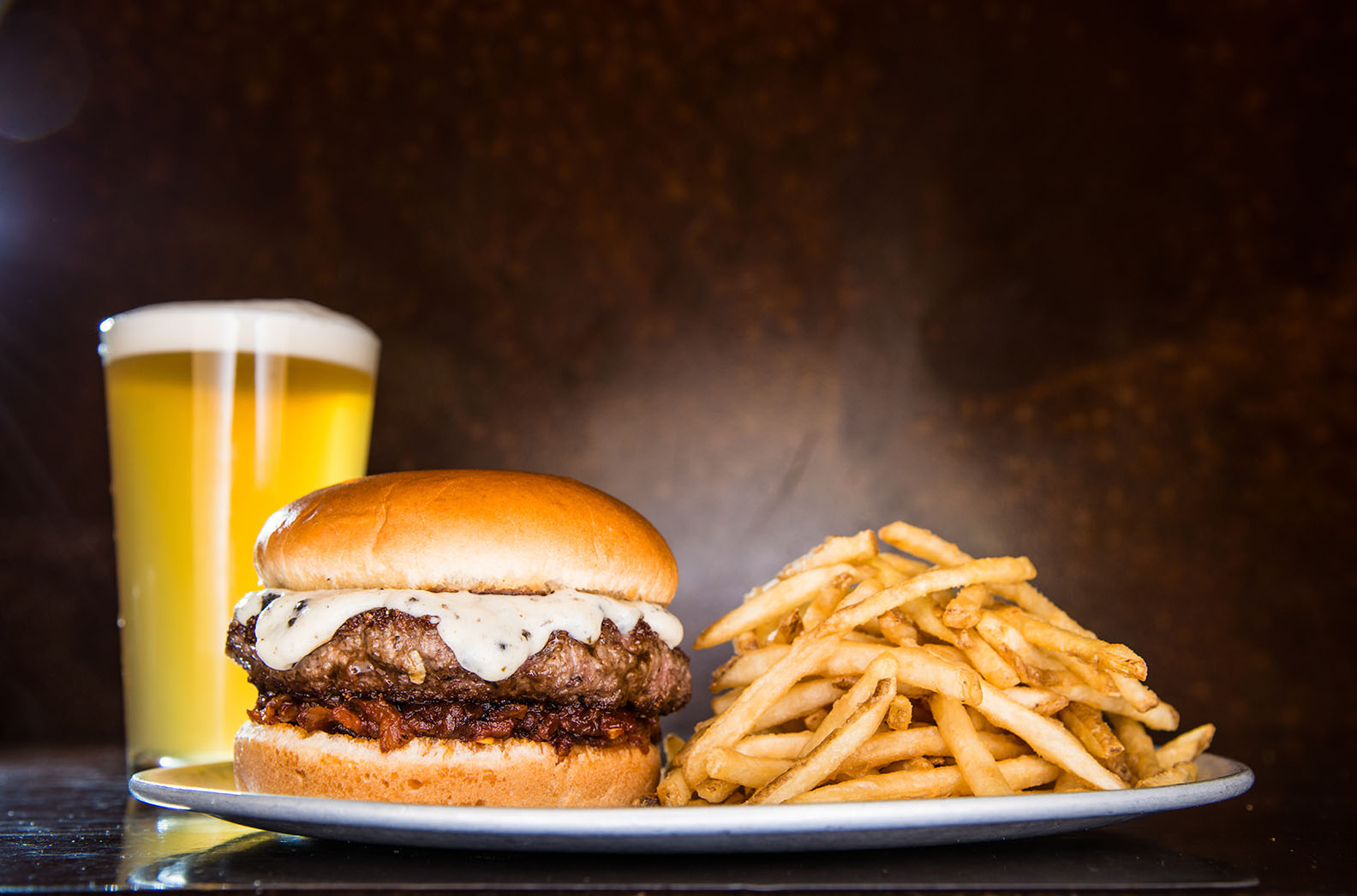 There’ll be even more beer served in the 12,000 square feet of Yard House, which will seat over 800 guests and offer 130 tapped beers, including offerings from local and regional breweries.

And because baseball, like all things, is better with fried chicken, you’ll get your double-brined fill from FEED - Fried Chicken & Such, Chef Marc Taft of Marietta restaurant Chicken and the Egg. FEED’s poultry will come from Georgia’s own Springer Mountain Farms, and the menu will feature Nashville-style hot chicken, North Carolina catfish, chicken-fried steak and other meals sure to inspire a walk around the Park, but only after a sip or two of beers, bourbons, vodkas and gins from the Southeast. 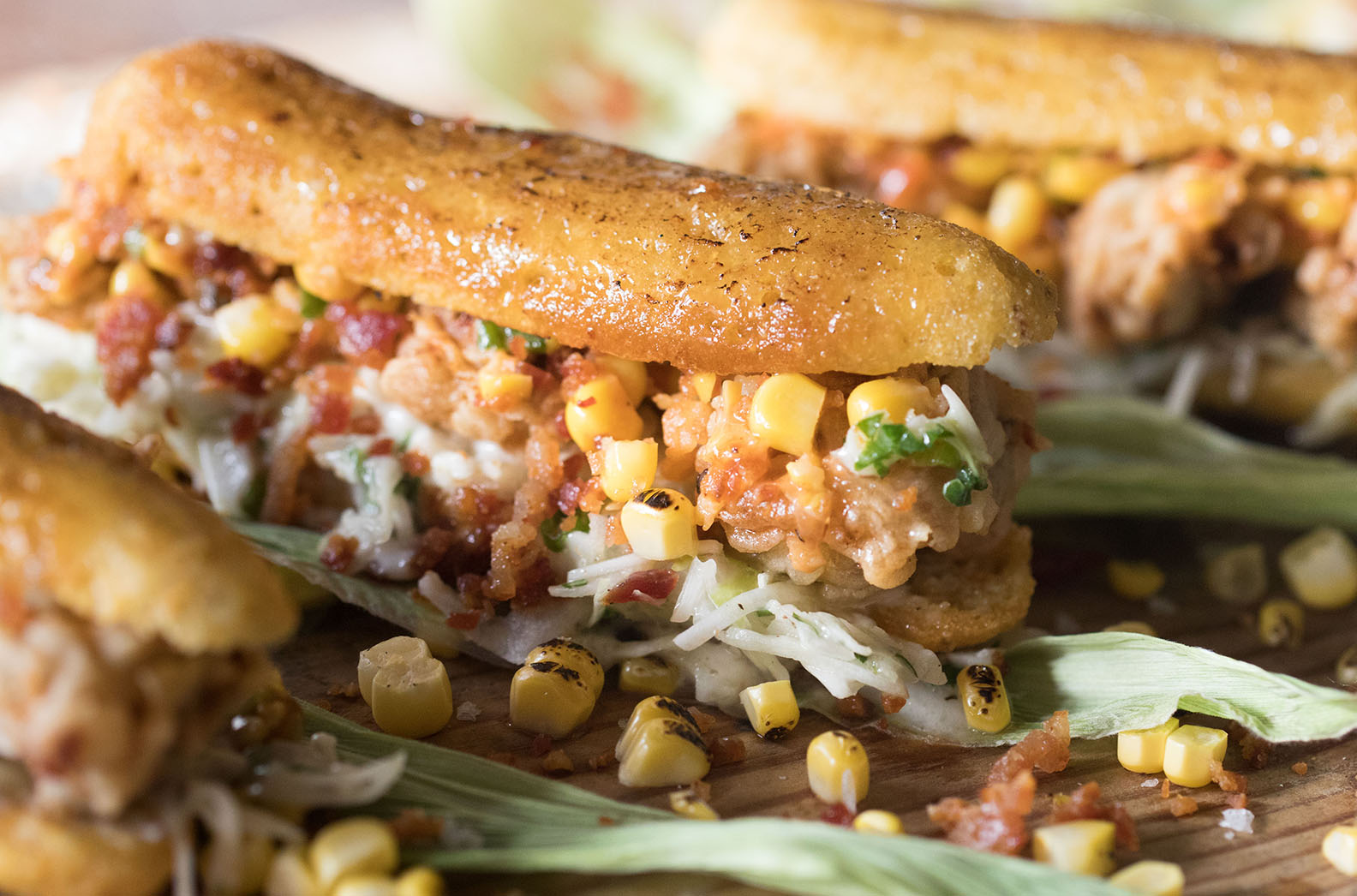 All in all, SunTrust Park sounds like it’s going to be a great place to root for Braves as well as enjoy new food concepts from some of Atlanta’s most respected culinary minds. Sure, it’s certainly a new day when such heralded chefs heed the call to cook for baseball game attendees, but for his part at least, Chef Todd English can hardly wait for the gates to open, the grills to fire-up and the games to begin.

“Whether it’s the fried oysters or a tuna poke with charred pineapple, it’s bringing my experiences of traveling around the world and bringing it back home,” English said. “I enjoy the challenge and the journey, because it keeps it interesting for me as well. It’s the fun of creating and discovering, and it’s constantly changing. You’ve gotta stay hip to it and be part of it.”

You can purchase single-game tickets starting today at Braves.com. Even if you're not usually the baseball type, you'll be a fan of The Battery Atlanta and your new field of feeding options at SunTrust Park.

Until you get your seat, here's an exclusive recipe for one of the dishes that will be on the menu at Todd English Tavern, offered by Chef himself.

Preheat oven to 350˚. Butter a baking dish; set aside. Transfer squash to a rimmed baking sheet; drizzle with oil. Toss squash until evenly coated. Rub the cut sides and the cavities of the squash with butter, and season with salt and pepper. Place cut sides down. Bake until squash are very soft. Remove from oven and set aside to cool. Do not turn off oven.

When the squash is cool enough to handle, use a large spoon to scoop flesh into the bowl of a food processor; discard skins. Add cream and pureé until smooth. Add nutmeg, and season with salt and pepper. Process until well combined. Transfer mixture to a large bowl; set aside.

Bring a large covered pot of water to a boil; add salt. Add pasta, cover, and return to a boil. Uncover, and cook according to package instructions until al dente. Drain and add to bowl with cooked pasta along with 2 cups Parmesan cheese and the marscapone cheese. Stir until well combined. Transfer mixture to prepared baking dish. In a small bowl, combine remaining ¼ cup Parmesan cheese, bread crumbs, and amaretto crumbs. Sprinkle mixture evenly over the surface of the pasta mixture. Bake until heated through and the top is golden brown, about 30 minutes.