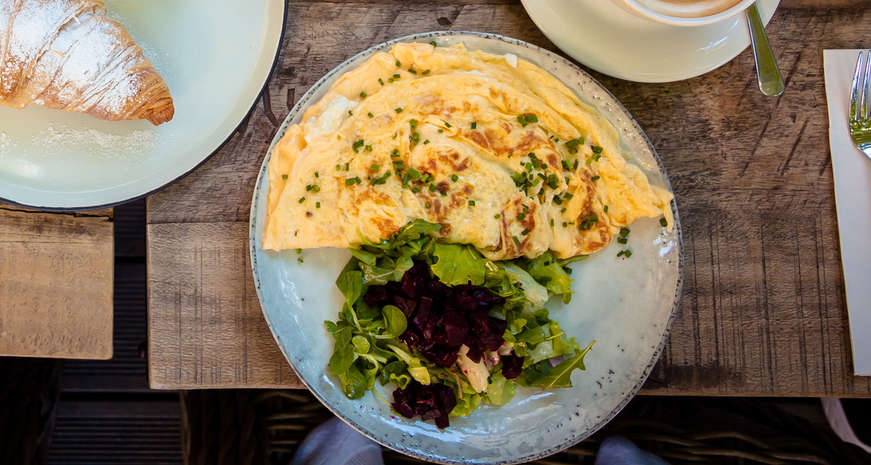 While the expected health outcomes of eating eggs keep changing, their nutritional value doesn't. Eggs pack protein, minerals, carotenoids and all of the other materials they need to organize into a baby chicken and peck its way out of a shell. I find that impressive, but I'm biased. I ate three or more eggs just yesterday, thanks to a flock of hens in the backyard and a recipe for a crepe omelet that has increased my risk for bliss.

Floating one's a rotten egg
If eggs were truly bad for one's health, consuming multiple crepe omelets per day would be a problem. But the only egg-related concern weighing on my ovovorous heart is: "Does it float?"

A floating egg is a rotten egg, which is an egg you want to avoid. Most hen keepers have the experience of discovering an unsanctioned nest in some random corner of the yard, filled with eggs of an uncertain age. Cracking and sniffing is one way to assess the fitness of an egg, but can also lead to PTSD, not to mention ruin breakfast.

Place the egg in question on the bottom of a pot of water. If the egg lies prone, it's as fresh as tomorrow's news.

As the egg ages, it will produce waste gases that collect in the wide end, which will rise toward the surface, while the pointy end stays touching the bottom. At this stage an egg will taste fine, although the texture won't be as tight. The yolks won't stand up like solid spheres; instead they'll collapse into yellow circles in a thin puddle of watery white albumen.

Once the egg rises off the bottom, it's done. Send it to the landfill. Triple-bagged.

Tasty options
Assuming you have decent eggs, there should be no stopping you from making this indecently good omelet. When filled with Nutella or topped with whipped cream, it will taste like the sweetest crepe in Brittany. But when filled with savory ingredients and spattered with hot sauce, it tastes like the sunniest omelet. Salty or sweet, the crepe omelet will always taste good with a cup of coffee, which is all I truly ask of an egg. That, and to not float.

You will need a good pancake recipe for this dish. I use Krusteaz Buttermilk Pancake mix, which was developed at the University of Washington in the 1940s to feed Alaska pipeline workers. Whichever recipe or mix you use, it will probably take an omelet or two before you figure out how much to add, as each mix will perform differently. With Krusteaz, I use 2 teaspoons per egg.

Once you have mastered the basic recipe, you will be ready to take it in any sweet or savory direction you wish. Fill it with fruit or vegetable, ricotta cheese or Philly cheesesteak. Usually, I just add grated cheddar, which melts into the egg batter. My kids have been requesting the chocolate omelet, in which cocoa powder and sugar are mixed in with the batter, and the omelet is filled with sour cream. Just remember: if it tastes good, it will taste good in a crepe omelet. 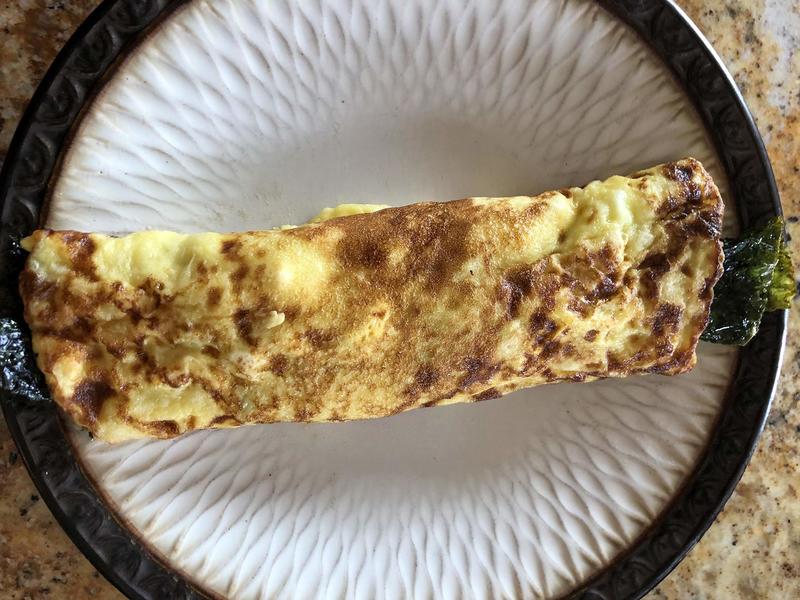 Instructions
Crack the egg into a bowl and beat with the milk and pancake mix. Don't over-beat or go after every lump. Melt the butter in an omelet pan on medium. Add the mixture, tilting the pan around for even coverage. When bubbles appear on the edge of the disc, lay the filling across the middle, perpendicular to the direction you will fold the omelet.

The delicateness of the crepe omelet makes it difficult to fold in half like a normal omelet. Instead, fold and roll the crepe across the pan in several little movements.

When bubbles appear toward the middle, slide a spatula under an edge and give it a test. If it feels solid, turn over an inch or two of the edge. Let it sit there for a moment to set up, then fold again. You may want a second spatula to help fold it evenly.

Keep turning over, a little at a time, until it's a cylinder pushed up against the edge of the pan. (If you botch the folding part, stir it around like you meant to all along, and serve a glorious pile of scrambled eggs.)

Turn off the heat and let it sit for a minute to set up. Slide onto a plate and serve with coffee.

It's time to mix up your deviled eggs

It's time to mix up your deviled eggs