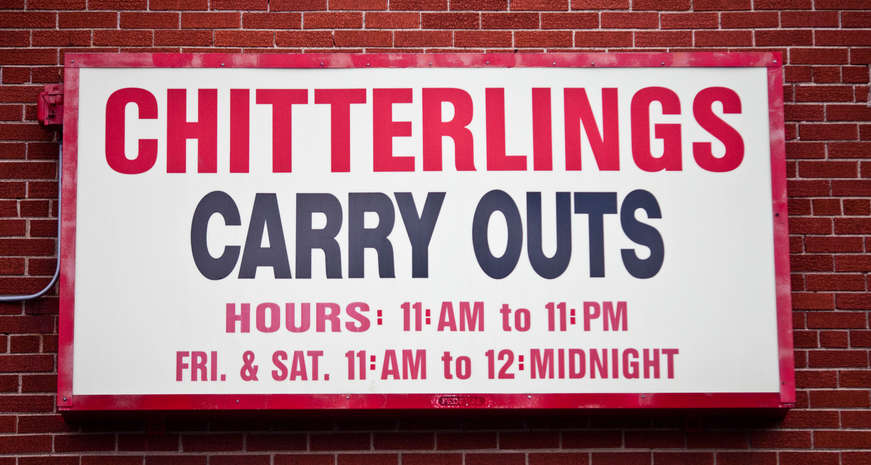 A few weeks ago, my 82-year-old grandmother Annie Marie Murphy came to visit me from Los Angeles. Getting her on a plane is a fairly large feat and so much of her visit was aimed at showing her around the new South.

My grandmother is originally from Shreveport, Louisiana but left, as so many African-Americans did, during the Great Migration. She was a small child when her family left Louisiana for California, but her memories, usually tied to food, remain vivid. So many of the foods I grew up eating are the same ones she did, save for one: chitlins.

Chitlins, or chitterlings, are the small intestines of pigs. Typically braised in a large pot with onions, peppers, vinegar and various seasonings, chitlins are a soul food delicacy. But they're not for everyone.

First of all, they smell like a rotting corpse. And the cleaning process is a nightmare — just think about what is actually in an intestine. Once cooked, chitlins have a texture reminiscent of boiled soft rubber. Even so, they enjoy a fairly widespread popularity among all sorts of Southerners.

As a small child, I remember my grandmother coming to our home for the holidays to make some of my favorite foods — sweet potato pie and collard greens. But, inevitably, the smell in the house would change from the sweet and familiar to the repugnant, and that's when I knew she'd started cooking chitlins. I would run out of the house, practically gagging (yes they smell that bad) and would refuse to come back until the smell had dissipated. I could not, for the life of me, figure out why my family would gather around the chitlin pot like eager children in order to get their hands on a bowl. 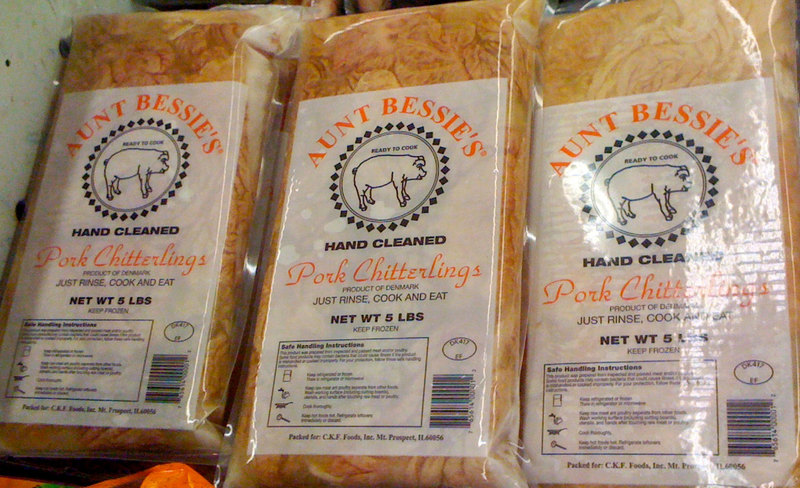 Who on earth would ever want to eat something that smelled that foul? Year after year I refused my mother and grandmother's pleas to try. A strong and curt, "no thank you," was always my response.

The years passed without chitlin incident until I found myself enrolled at The New School of Cooking for culinary school. As part of the curriculum, we explored foods from different cultures: pâté and terrines from France, grilled chicken livers and gizzards from South East Asia and Italian-inspired sweetbreads. I learned to not only enjoy these bits of offal, but to celebrate them. I even went so far as to start ordering these items when I would come across them at different restaurants. Which led me to start thinking: If I could learn to appreciate offal in other cultures, why was it so hard to embrace it in my own?

When my grandmother arrived at my front door this fall, I asked her to make chitlins. Her response was, of course, unexpected after my years of refusing to eat hers. "You want me to do what baby?" she asked, eyeing me with a mix of disbelief and bemusement. I repeated myself and assured her that I did in fact want her to cook a pot of chitlins in my small condo, which of course would mean my whole home would smell horrible. 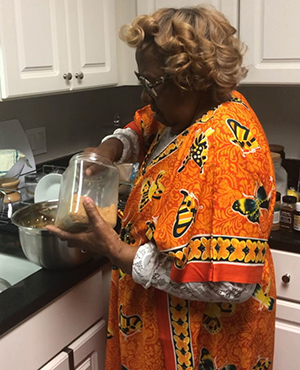 Off we headed to the market to buy a tub of pork innards, which we found, frozen, at the Buford Highway Farmers Market. Once we got all of the other ingredients we would need and got the chitlins defrosted, the real work began.

The process of cleaning chitlins is not only arduous, it's quite simply gross. The intestines are predictably slippery and while their packaging assures buyers that they are purchasing pre-cleaned guts, there is still much to do.

To watch my grandmother in the kitchen at this point is to watch a master at work. She spends at least an hour diligently bent over my kitchen sink peeling the tough membrane-like outer coating away from the intestines and, once that task is finally completed, she begins flushing the innards with cool water until everything runs clear.

I'm not going to lie, the smell here was already incredibly strong and it only got stronger when the chitlins were placed in a large stock pot with peppers from my garden, onions, vinegar, bay leaves and black peppercorns. It smelled exactly as I remembered from my childhood and for over two hours I seriously considered if I had made a grave mistake. 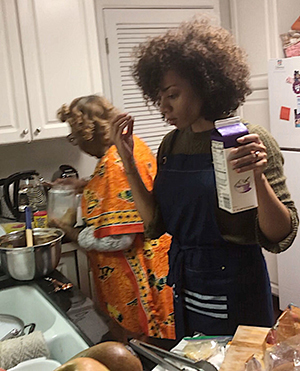 The house smelled to high heaven outside our front door, on the balcony and down the stairs, too. No matter where I went the scent of what we were cooking followed me. I half expected the neighbors to lodge a complaint against me or turn up at my door angrily asking me what the heck I was cooking. Luckily, after three hours the smell went away (or we all got used to it) and soon it was time for my grandmother to ladle a healthy helping on chitlins into a small bowl.

I have learned over the years that for me, smell, taste and texture are indivisible. Chitlins challenge my palate on every level.

I wish I could tell you that eating this batch of chitlins changed my mind, but that would be a lie. I just plain do not like them. However, I do respect them. I respect and honor that because of chitlins, I have a cultural tie to other African-Americans I might otherwise not. More immediately, I appreciate that chitlins are the reason my grandmother is in my kitchen, sharing stories of her childhood and teaching me (however begrudging I may be) to make a soul food staple.