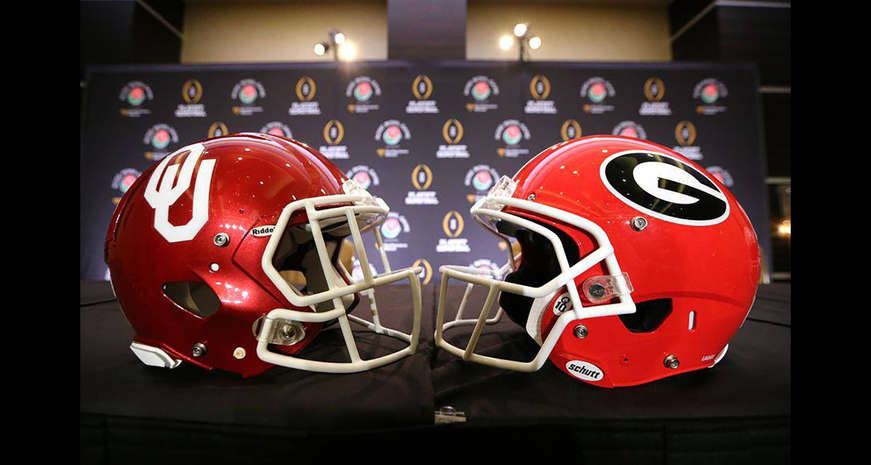 So what’s up for grabs? A chance to name and serve a commemorative collaboration beer in the winning breweries tasting room.

Alabama’s Good People Brewing Company, American Solera of Oklahoma, Birds Fly South Ale Project of South Carolina join Georgia’s Scofflaw Brewing Co. in betting on who will win the National Championship title, which will be played on January 8 at the Mercedes-Benz stadium in Atlanta. But before the Championship game, the four teams will have to get through the first round of playoffs taking place this weekend.

The Georgia Bulldogs will take on the Oklahoma Sooners in the Rose Bowl on New Year’s Day. And the Clemson Tigers will play Alabama’s Crimson Tide in the Sugar Bowl.

And each brewery is confident their team will come out on top and aren’t afraid to voice their opinion. “We all know the Bulldogs will take a bite out of these guys’ asses,” said Scofflaw’s Shirah. “The only thing good to come out of Oklahoma was T. Boone Pickens and Travis Herman, our brewmaster.”

We have placed bets w @bfsbeer, @GPbrewing & @americansolera that Bulldogs will win National championship vs. Tide/Tigers and Oklahoma. Losers meet at winner to brew collaboration beer, but not one that Suks like Oklahoma. pic.twitter.com/2ahVTdL7rr

According to a press release: “Shawn Johnson, co-founder of Birds Fly South Ale Project, is still savoring last year’s win by Clemson in the title game. ‘Alabama? What are you? An elephant? The Red Sea?’ he said. ‘Everyone knows Coach Saban has dirt on the NCAA or Alabama wouldn’t be here again.’”

And the brewery owners have every right to talk some smack because there are some consequences for the losing breweries. Those who end up in the loser’s bracket will have to pose for a picture while wearing the winning’s team jersey and collaborate on a commemorative beer at the winning brewery.

The guys from @ScofflawBrewing @GPBrewing + American Solera were foolish enough to take a bet against the #ClemsonTigers in the first-ever College Football Craft Beer Championship. It's gonna be roll-over-tide come Jan. 1. when The Devil Himself meets his Death Valley tigers.

You can keep up on the trash talk by following the four different breweries on Facebook for updates on who will be serving up the commemorative National Championship beer.