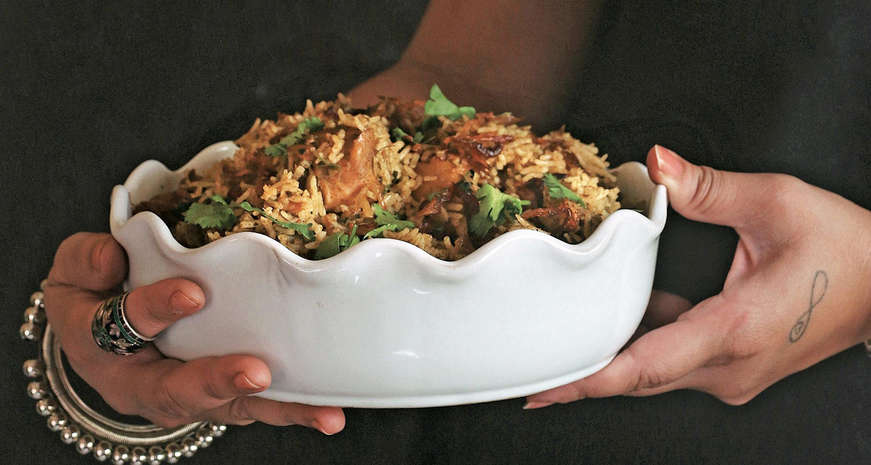 Chicken Dum Biriyani from "My Indian Kitchen: 75+ Authentic, Easy and Nourishing Recipes for Your Family" by Swayampurna Mishra

From paella to biriyani, chicken and rice is a global comfort food

This story was originally published on Austin360, and it was re-published here on Southern Kitchen through More Content Now, our content distribution hub.

If you've never cooked chicken in a bed of rice, add one of these recipes to your to-make list.

Chicken and rice is a comfort food anywhere you'll find both chicken and rice, which is most places around the world, including here the South. That's why you'll find regional variations from Spain to India, from Morocco to Mexico, and each cuisine has its own spin on making the dish, not to mention each cook who makes it.

Even if you haven't mastered the crunchy socarrat found in a paella, chicken and rice is still a comfort food worth cooking and tweaking, according to the spices you're craving or the vegetables you have on hand. You could even replace the chicken with any number of proteins if you prefer.

You might not have every single ingredient in some of the recipes, such as the biriyani, which calls for both green and black cardamom pods, but don't let that stop you from trying a new technique or from seeking out one or two new spices for your pantry. 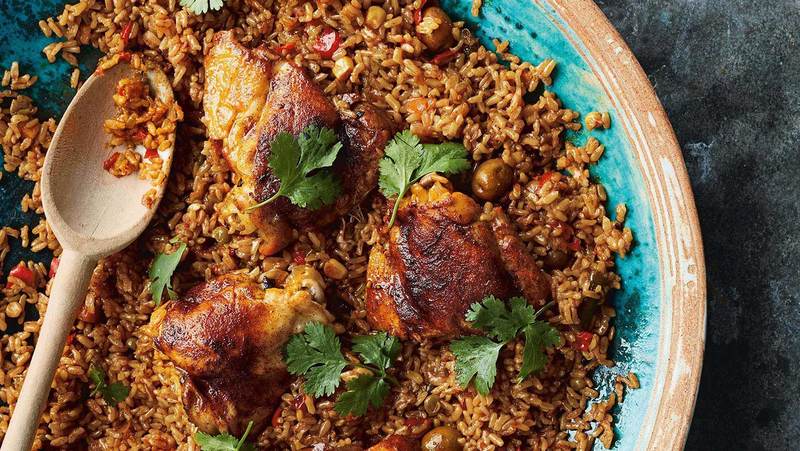 Instant Pot Arroz con Pollo
Growing up with a Latin mom, I had rice with just about every meal. So it's no surprise that one of my favorite dishes from childhood was arroz con pollo. In fact, I still request it when I have dinner at my mom's. It's pure comfort food to me. To make it a bit healthier, I use brown rice in place of white, and I cook it in my Instant Pot with fabulous results. Serve this dish with some sliced tomatoes and cucumbers for a quick and simple side salad. (Gina Homolka)

Instructions
Season the chicken with the vinegar, 1/2 teaspoon of the sazón, the garlic powder and the salt.

Press the saute button on an electric pressure cooker. When hot, add 2 teaspoons of the oil and cook the chicken until browned, 1 to 2 minutes per side. Transfer to a plate.

Seal and cook on high pressure for 27 minutes, until the liquid is absorbed and the chicken and rice are cooked. Use either a quick or natural release, then open when the pressure subsides.

To serve, place 1 cup rice on each plate, top with 1 chicken thigh, and garnish with the cilantro, if desired. If you like spice, top with the hot sauce. 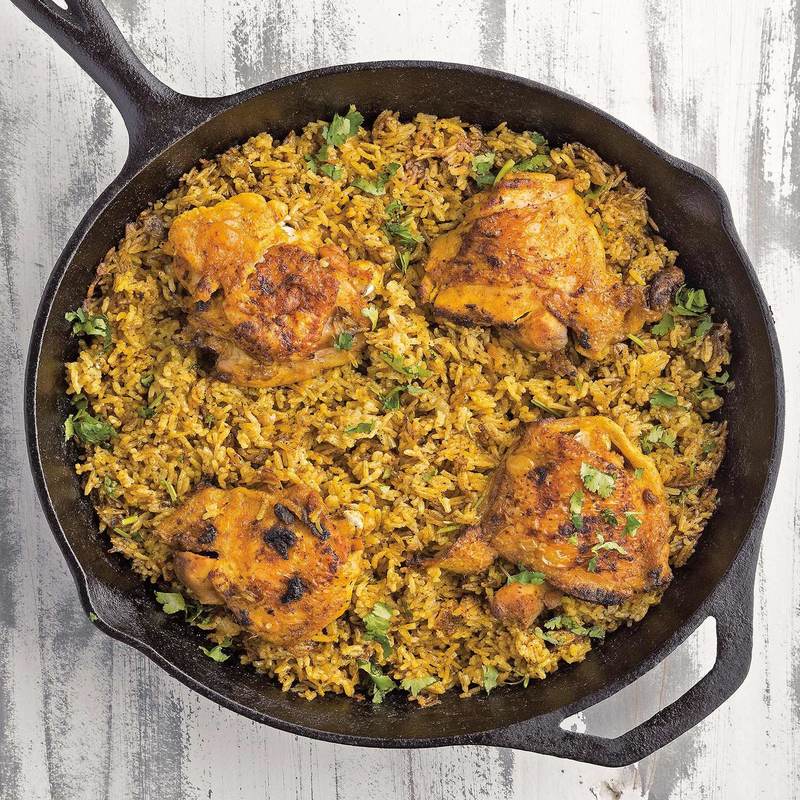 One-Pot North African Chicken and Rice
The first time I ever made chicken and rice in one pot was amazing. The flavor and juices from the chicken seeped down into the rice and gave it an incredible flavor. Everything in the pot was seasoned, and it turned out to be a treat. This chicken and rice is just like that. Both the rice and the chicken are seasoned with flavors most popular in North Africa, and they finish cooking together in the oven. It's absolutely delicious. (Evi Aki)

Remove the chicken and set it aside. Remove any black or burned bits from the skillet, then add the remaining 1 tablespoon of oil. Add the onion, oregano, turmeric and cumin. Saute until the onion becomes translucent, 2 to 3 minutes. Add the garlic and rice and saute for 1 minute, just until the rice begins to turn golden. Add the chicken stock, water and salt and bring the mixture to a simmer. Place the cooked chicken thighs directly on top of the rice. Cover the skillet with a lid and transfer it to the oven.

Bake the chicken and rice in the oven for 30 minutes. After 30 minutes, remove the skillet's lid and bake for 15 minutes, until all the liquid has been absorbed. Remove the skillet from the oven and let it sit for 10 minutes before serving. Garnish with the grilled lemon slices and fresh parsley.

From "Flavors of Africa: Discover Authentic Family Recipes From All Over the Continent" by Evi Aki (Page Street Publishing, $21.99) 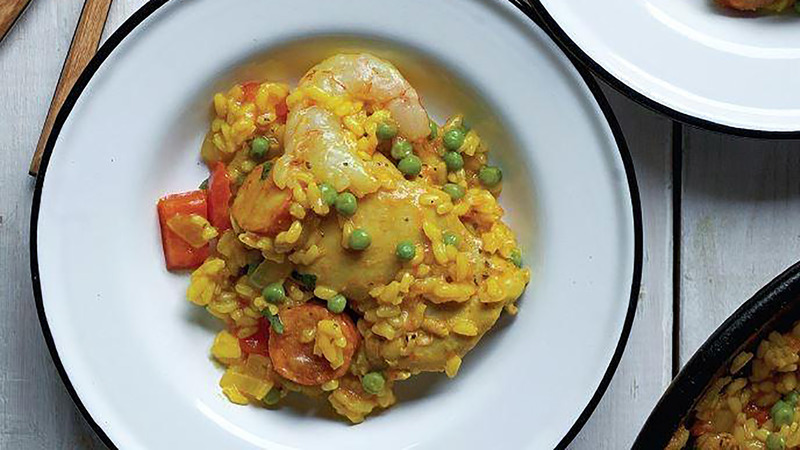 One-Pan Paella
The first time I made this dish, my teenage sons claimed it was the best thing I had put on their plates all year. Seeing as I feed a family of five three meals a day and had spent months testing more than a hundred recipes for this book, I beamed at the high praise. Although I suggest making this in a 12-inch (30 cm) skillet, it will work in a 10-inch (25 cm) skillet as long as it's deep. For a larger group, feel free to double the recipe and cook it in a 14-inch (35 cm) pan; this recipe is forgiving and will work without issue, but to ensure that the rice cooks evenly I suggest rotating the pan on the burner frequently. Chorizo can be tricky to find, even in fine supermarkets, so here's an inspired substitution if needed: replace the paprika with smoked paprika and the chorizo with kielbasa. You may be tempted to, but don't stir the paella; you'll be rewarded with the delicious crispy rice on the bottom of the pan known as the socarrat. Feel free to add 8 shrimp (peeled, with tails intact) and 8 mussels to the pan with the peas for a more traditional take on paella. (Jan Scott)

Heat a 12-inch cast iron, stainless steel, or nonstick skillet over medium-high heat. Add the chicken and cook until browned, about 3 minutes per side. Transfer to a plate and set aside. Add the remaining 1 tablespoon oil to the skillet. Tip in the chorizo, onion and pepper and cook until the vegetables are soft and the sausage begins to crisp, 4 to 5 minutes. Stir in the rice and turmeric, coating the rice evenly with the oil.

Pour the tomatoes and broth into the skillet and stir to combine. Return the chicken and any accumulated juices to the skillet. Bring to a boil, reduce the heat to medium-low, partially cover and cook until the liquid has evaporated and the rice is tender but firm, 15 to 20 minutes.

Scatter in the peas and shrimp. Cover, turn off the heat, and let sit for 3 to 5 minutes, or until the shrimp are opaque and pink. Season with more salt, if needed. Garnish with lemon wedges and serve immediately.

From "Oven to Table: Over 100 One-Pot and One-Pan Recipes for Your Sheet Pan, Skillet, Dutch Oven and More" by Jan Scott (Penguin Canada, $24.95) 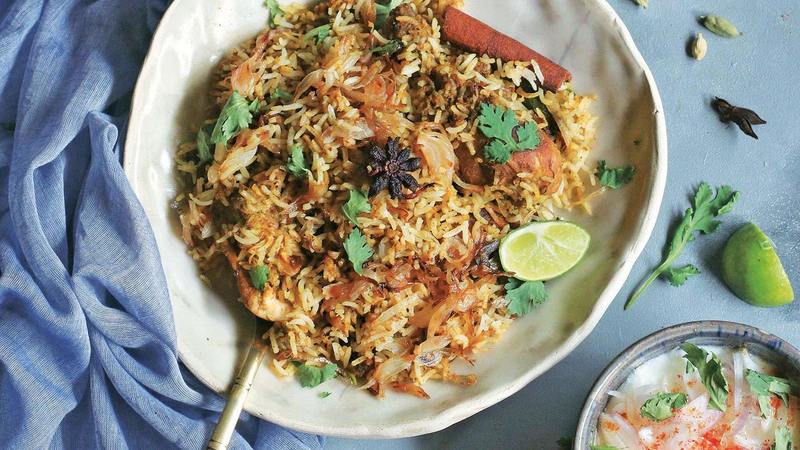 Chicken Dum Biriyani
A perfectly made bowl of chicken dum biriyani is India's answer to Italy's spaghetti, France's beef bourguignon and Spain's paella. A one-pot meal of what is essentially just rice and chicken is taken to another level with various spices and a special cooking style called dum, which essentially means sealing the fragrance and the essence of the dish by making sure it's slow cooked in a sealed vessel. As you take a good spoonful of this dish, the fragrance from the ghee, the richness of the spices coating the chicken, the tenderness of the meat, the gloriousness of it all will hit you — and before you know it, you will have finished five quick spoonfuls as though in a daze. Finally, you will slow down and start to savor the intricate flavors of the dish, wonder at how these mere ingredients can be turned into something that's an art in itself, marvel at how the marriage of basmati rice and chicken can seem like it's made in heaven. And then you will forget everything else and simply sink in. Any cut of chicken with work in this dish, but this recipe works best with chicken that has been marinated overnight. (Swayampurna Mishra)

Heat some oil in a large, heavy-bottomed saucepan over medium-high heat. Add the onions, reduce the heat to low and cook until they are browned, about 15 minutes. In a food processor, combine the browned onions, ginger, garlic, green chiles, cumin seeds, peppercorns and red chiles. Add a little water if needed to blend it till smooth.

Pour this masala into a large bowl. Add the yogurt, Kashmiri red chili powder, turmeric, garam masala, biriyani masala, lemon juice, salt, cilantro and mint. Mix everything well. Add the chicken to the marinade and stir to thoroughly coat the chicken. Cover the bowl and let the chicken marinate in the refrigerator overnight, at least 8 to 10 hours. When you are ready to make the biriyani, take the chicken out of the refrigerator and let it come to room temperature.

To make the rice: In a large pot, bring plenty of water to a boil over medium-high heat. Place the cloves, green cardamom, black cardamom, cinnamon, bay leaf, peppercorns and star anise on a piece of soft, clean muslin cloth and make a bundle of it. Now add this spice bundle to the water. Add the ghee and salt and let the water come to a full boil. Add the rice and let it cook just until it is half done, 7 to 8 minutes. (Be careful not to overcook the rice — it should be grainy.) Drain the rice and let it cool a bit while the chicken is cooking.

To cook the chicken: melt the 2 tablespoons of ghee in a large, deep, heavy-bottomed Dutch oven with a tight-fitting lid over high heat. Add the marinated chicken and marinade liquid. Let it cook for 5 minutes undisturbed. Turn the chicken pieces over, reduce the heat to low and cook the chicken, covered, for 15 minutes. Add a splash of water if you feel it's sticking to the bottom of the Dutch oven.

In the meantime, prepare the layering components: Heat 2 inches of oil in a deep pot over medium-high heat. Once the oil is smoking, add the onions to it and fry until they are crisp and brown, 6 to 7 minutes. Remove the onions with a slotted spoon and transfer them to paper towels to drain. Set the fried onions aside. Place the milk in a small bowl or measuring cup. Add the saffron. Set the saffron milk aside.

After layering the rice and meat, make sure at least a quarter of the Dutch oven is free for the steam to collect and aid in cooking. To create a seal on top of the pot, place a piece of aluminum foil across the Dutch oven, then close the lid tightly over the foil, making sure no steam can escape. Turn on the heat to low and cook for 20 to 25 minutes.

Turn off the heat, but keep the Dutch oven sealed for at least 30 minutes, or until you are ready to serve. Before serving, dig into the rice, making sure to get all the layers, and serve with a simple mixed raita.

From "My Indian Kitchen: 75+ Authentic, Easy and Nourishing Recipes for Your Family" by Swayampurna Mishra (Page Street Publishing, $21.99)