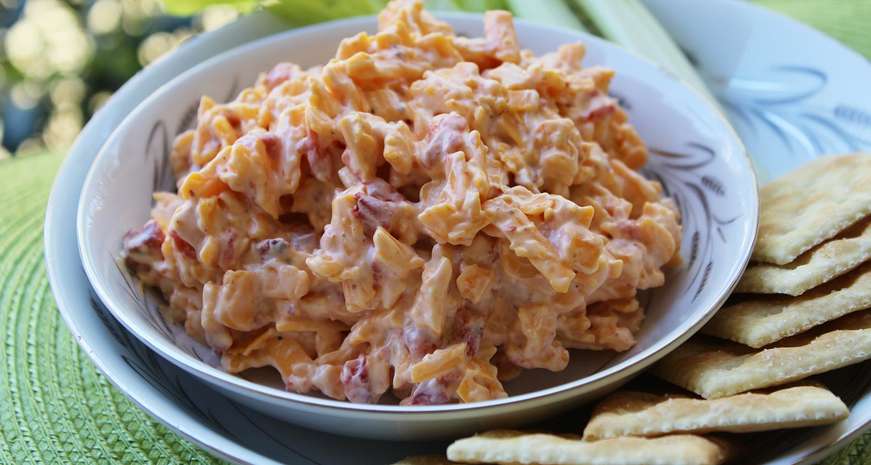 Cheese, peppers and possibilities: Anne Byrn on the history of pimento cheese in the South

We asked former Atlanta Journal-Constitution food editor and New York Times bestselling author Anne Byrn to give us a bit of pimento cheese history. She not only obliged but also provided a fantastic recipe below that's ready to be widely spread.

When it's hot outside and we don't feel like cooking inside, pimento cheese comes to the rescue. It's the "pate of the South." Just open the fridge and it's ready for fishing trips, family reunions, funerals, and even weddings.

I was dusting my cookbook shelf last week and uncovered an envelope postmarked from Mobile, Alabama. The letter inside, from the late food writer Eugene Walter, brought back a flood of memories. Had it been 21 years ago since I telephoned Walter and asked his thoughts on pimento cheese?

Knowing he was a man of flowery prose and opinion, I knew what he said would be good fodder for a newspaper column. Walter was wonderfully old-school and typed his thoughts (yes, using a typewriter) onto pages in the envelope.

He recalled pimento cheese as a "a filling in school lunchbag sandwiches back in Depression days." Then he queried his friends. "Everybody knew pimento cheese but nothing about it," Walter reported to me. "Most thought they first ate it in the 1920s before the Wall Street crash, some thought after."

And then he digressed, "An old Mobilian of Greek background, whose family had dealt in foodstuffs for over a hundred years, remembers that a favorite dish at summer luncheons and buffets was quartered avocados dressed with lemon juice and a pinch of salt, and stuffed with a glop of soft cheese flavored with any one of hundreds of possibilities... but when some kind of pepper was part of it, it became pimento cheese."

Pimento cheese is just that - cheese, peppers, and possibilities.

A Little Pimento Cheese History
It was named for the Spanish word for pepper: pimiento. The second "i" has mostly been dropped in spelling the word today, but you'll find "pimiento" purists who insist on the original spelling, just as they insist on making "pimiento" cheese like their mothers did.

And I hate to break it to them, but "pimiento" cheese wasn't invented in the South. It's well documented that the first pimento cheese was a blend of Neufchâtel cheese and diced pimento peppers. It was sold by the slice or in a jar in early 1900s groceries all over the country, from Richmond to Portland. And with the onset of World War I, and the need to feed troops and volunteers easily, and inexpensively, sandwich spreads like pimento cheese came into vogue.

Food writers of newspapers and cookbooks instructed readers how to turn this store-bought white and supposedly bland pimento cheese into something interesting to spread on bread. You could grind it and combine with a little cream until spreadable, they said. Or, according to a food writer from Shreveport, Louisiana, you could add mayonnaise, lemon juice and Tabasco. 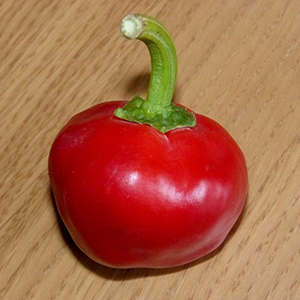 Around that same time, Georgia farmers were experimenting with growing the Spanish pimento -- a meaty, heart-shaped red pepper. Pomona Products founder George Riegel of Experiment, Georgia (located south of Griffin), requested seeds from the Spanish consulate, and in 1916 was the first U.S. farmer to grow the peppers.

Pimento canning started a little later and was done mostly by Moody Dunbar, an East Tennessee company begun in 1933 by a former school teacher and seed salesman who made his money canning peppers for food companies. One of those food products was a commercial pimento cheese spread similar to what we see today. If you lived in a southern town in the 1930s, you could buy this new orange pimento cheese, but if you lived in “the country” or couldn't afford it, you made your own.

The earliest home recipes were a mix of grated hoop or "rat" cheese, the cheddar-type sold at country stores, along with canned pimento peppers and mayonnaise, either homemade or one of the new store brands. There was Hellman's, born in 1905 and popular in much of the upper South, specifically Kentucky and Tennessee. Duke's was the regional brand of South Carolina. In fact, founder Eugenia Duke sold pimento cheese sandwiches to soldiers at Camp Sevier near Greenville, South Carolina, before she sold her mayonnaise in 1917. 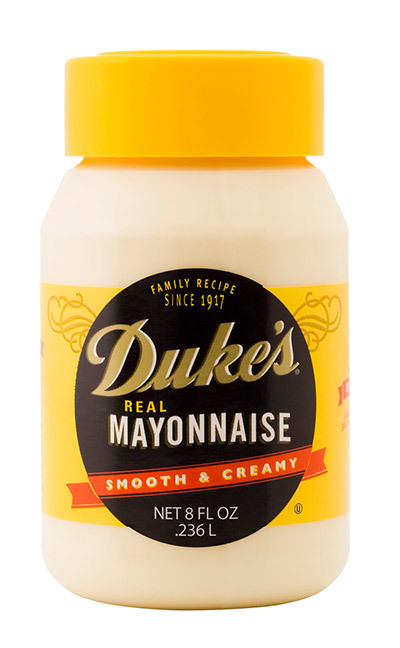 When one of her employees told her the reason people liked her sandwiches so much was because of her mayonnaise, Duke decided to bottle it. Twelve years later Duke's was bought by the family-run C.F. Sauer company of Richmond, Virginia, extending Duke's brand awareness into the Old Dominion as well as North Carolina. On the other hand, beginning in 1929 down south in Louisiana you had Blue Plate Mayonnaise, popular in New Orleans and much of Mississippi.

The South agrees on its sacred pimento cheese, but we don't agree on what mayonnaise to put in it.

You Say Duke's, I'll Say Hellman's
Rebecca Collins of Nashville, Tennessee, remembers the pimento cheese of her youth growing up in Magnolia, Mississippi, a little town on the Louisiana line. A Hellmann's mayonnaise jar was always in the fridge and filled with homemade pimento cheese. "I realized later that everybody didn't do that," said Collins, “but back in Mississippi, pimento cheese on white bread was a staple, like milk. We ate it for lunch and it was the go-to food when you were hungry." She adds that her father, a New Orleans native, was a Blue Plate man, but as her mother preferred Hellman's, that's the mayo they used.

The late Craig Claiborne, a New York Times food writer from the Mississippi Delta, never specified his mayo of choice, but he added chopped green onions and garlic, and liked a blend of mild and sharp cheddar cheese. I wouldn't be surprised if Claiborne used homemade mayo because he was such a purist about other things.

Novelist Eudora Welty wrote in her foreword to the The Jackson Cookbook in 1971 that you couldn't buy mayonnaise in Jackson, Mississippi, when she was a girl. And besides, homemade mayonnaise "had a mystique... girls were initiated into it by being allowed to stand at the kitchen table and help make it." Birmingham chef and Alabama native Frank Stitt calls for homemade or top-quality, store-bought mayo in the favorite pimento cheese he calls "Miss Verba's," and while Eugene Walter didn't say a word about a specific brand of mayonnaise in his letter about pimento cheese I tend to believe he fell into the homemade camp.

Over in Augusta, Georgia, where each April a green jacket is sought after at Augusta National, golf fans line up for pimento cheese sandwiches between rounds. That pimento cheese used to be made by one man: the late Nick Rangos, a native of Aiken, South Carolina, and an active member of Augusta's Greek community.

His recipe was a secret, and it is said to have been the gold standard – something caterers have tried to crack and expose the secret ingredient. Being from South Carolina, could Rangos have used Duke's mayo, and did he use the popular Greek seasoning salt in the mixture? The pimento cheese recipe in one edition of the Tea-Time at the Masters cookbook, written by the Junior League of Augusta, calls for a little blue cheese and "lite" mayo. Really?

Those could be fighting words in the Carolinas, where Rangos was from, where pimento cheese is proudly called "South Carolina caviar,” and where only Duke's is worthy of pulling everything together.

Hanna Raskin, food writer and critic for The Post and Courier in Charleston, says the popularity of pimento cheese in South Carolina is largely due to Duke's marketing efforts. That goes for much of North Carolina too, although the late cookbook author Martha Pearl Villas, who lived in Charlotte, suggested homemade or Hellmann's in her recipe. Could this have been because she was born in Georgia?

Just don't use light or "diet" mayo, Martha Pearl warned. "The only thing good about those fake, watery mayonnaises are the jars that might be used for canning."


In the Kitchen: Pimento Cheese Family Secrets
My daughter Kathleen was married in May to a wonderful guy whose mother is known for her pimento cheese – so well known that I was a little nervous about putting pimento cheese crostini on the appetizer menu at the wedding reception because, well, we weren't sure it could live up to hers.

So I texted Kathleen's new mother-in-law, Julie Osteen of Georgetown, South Carolina, and begged for her recipe. Or at least, her pimento cheese secrets.

“I have several ingredients that I believe can make pimento cheese 'a cut above'," said Julie, via text. "Roasted red peppers rather than pimentos. I use half mayo (Duke’s, of course) and softened cream cheese, grated Vidalia onion, diced pickled jalapeño and jalapeño juice (sparingly), as well as cayenne pepper for heat, and 3-to-1 extra sharp cheddar cheese to Vermont cheddar. I add salt and pepper as needed."

Got it. Now I drive to the grocery store because I don't have a jar of Duke's in my fridge. Julie's husband Graham says Duke's is "just the best... rich, creamy… a little more tangy" than other mayo. And the online pimento cheese devotees/police informed me that Duke's contains no sugar. Heaven forbid; pimento cheese shouldn't be sweet.

Then I assembled the mis en place (French for “everything in its place”) of add-ins for Julie's recipe. I grated the Vidalia onion, minced the pickled jalapeno and made what Julie calls the "sauce," which is the mixture of microwave-softened cream cheese and Duke's mayo. She adds the seasonings to this "sauce," then mixes in the peppers and finally the cheese. You need plenty of sauce, she said, and if after chilling in the fridge the pimento cheese needs smoothing out to make it spreadable, add a little mayo and pickled jalapeno juice.

It seems fussy to make the first time, but I’m sure once you make it enough times it's a downhill ride. And what you get is a South Carolina-style pimento cheese that is fabulous and addicting. Julie spreads hers on pita chips, Triscuits, Ritz crackers and hamburgers. I spread mine onto Saltine crackers and immediately felt a part of the family.

Pimento cheese has come a long way since Neufchâtel. And the little ladies who spread what they thought was pimento cheese onto wartime sandwiches would be mind-blown over what we're calling pimento cheese 100 years later. Cleaning the bookshelf and finding Eugene Walter's letter opened my mind to memories and all kinds of pimento cheese possibilities.