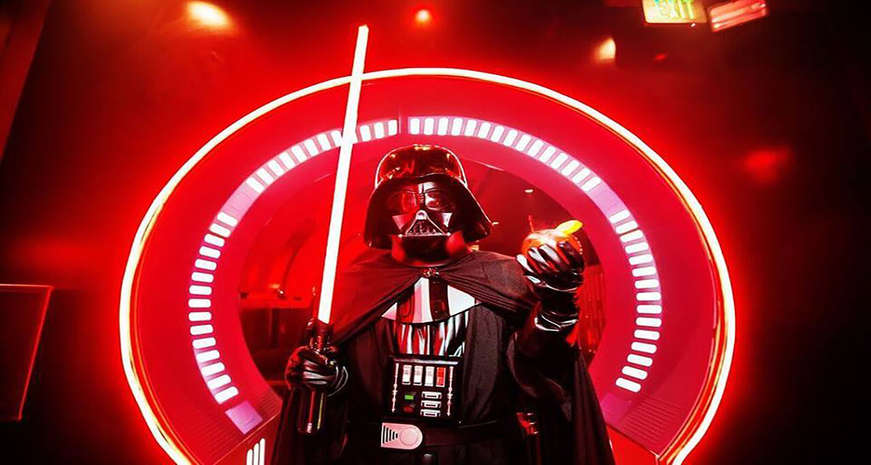 Celebrate Star Wars: The Last Jedi with Star Wars themed food and drinks at restaurants around the South

The upcoming release of Star Wars: The Last Jedi on Friday has fans going crazy theorizing about what will happen in the latest installment of the beloved movie franchise. To celebrate the release, restaurants and bars are creating cocktails and food that are out of this world. And we can’t think of a better reason to dress up as our favorite intergalactic character and celebrate the new movie with some delicious and creative food.

A fully immersive galactic experience awaits Star Wars fans at the Darkside pop-up bar in Washington D.C. Guests will be tempted by the evil side of the force with custom cocktails and food from around the galaxy.

“When you walk in, it’s going to feel like you’ve walked into the set of a Star Wars movie,” bar creator Zach Neil said in a Lonely Planet story. "I’m a macabre kind of person, I love things on the darker side. I’ve always rooted for the bad guys, Darth Vader and the dark side of the force.”

According to Food and Wine: “Pop-up guests can enjoy six different specially crafted drinks based on various parts of the galaxy, iconic planets, and memorable moments from the entire series of films. That includes cocktails like the Red Force, Blue Force, The Imperial, The Dark Side, The Galaxy, and The Mindtrick, many of which smoke, sizzle or flame.”

The creative food menu at The Dark Side changes daily, but guests can expect galaxy-inspired items, like Bantha Fodder (vegan sushi egg rolls). And don’t forget to dress up. Costumes are not required but encouraged by the bar’s creator. “If people don’t dress up we’re going to let them in but we’re going to frown at them the whole time,” Neil said.

If you can’t make it to the pop-up bar before the movie comes out, you’re in luck. The bar will be open until the new year. Walking up to the bar is a possibility, but for the best intergalactic experience, reservations are highly recommended. Entrace costs $33 per person and includes two custom cocktails.

As one of the newest members of the Disney family, Star Wars will be getting its own theme park in Orlando, Florida, which is slated to open in 2019. In the meantime, love for Star Wars is showing up in the form of food in Orlando. Disney’s Hollywood Studios will be hosting Star Wars: Galactic Nights on Decmber 16. “Star Wars fans should look for food and beverage items ranging from the Wookiee-inspired shrimp and chorizo skewer and Tatooine Bisque to the watermelon lemonade Jettison Juice, served with a miniature Death Star glow cube,” reported Orlando Weekly. But the star of the show will be the Lightsaber Churro, which is a red or blue churro resting in a classic Lightsaber hilt.

These Lightsaber Churros from @StarWars: Galactic Nights Are Calling to You: https://t.co/Va9PeISn8A 💫 pic.twitter.com/HGRej3Zkpz

The Galaxie bar in Louisville, Kentucky offers Star Wars biggest fans a chance to snack on some yummy Star Wars themed snacks, like Vader fries, in a spaced-themed bar. If you’re looking for a sweeter Star Wars treat, Sugar Shack Donuts in Virginia Beach, Virginia is selling a set of five Star Wars themed donuts for $12. Today is the last day to preorder the donuts. Sugar Shack is also giving away a free donut today to customers who bring Star Wars memorabilia into the store.

In Texas, Galaxy Burgers and Breakfast takes Star Wars seriously. The Star Wars themed restaurant serves breakfast, burgers and sandwiches all with names that perfectly fit the Star Wars theme. On the menu, guests can find: The Rebel Taco Alliance, Millenium Flyer, Dark Side of the Moon and A Newer Hope.