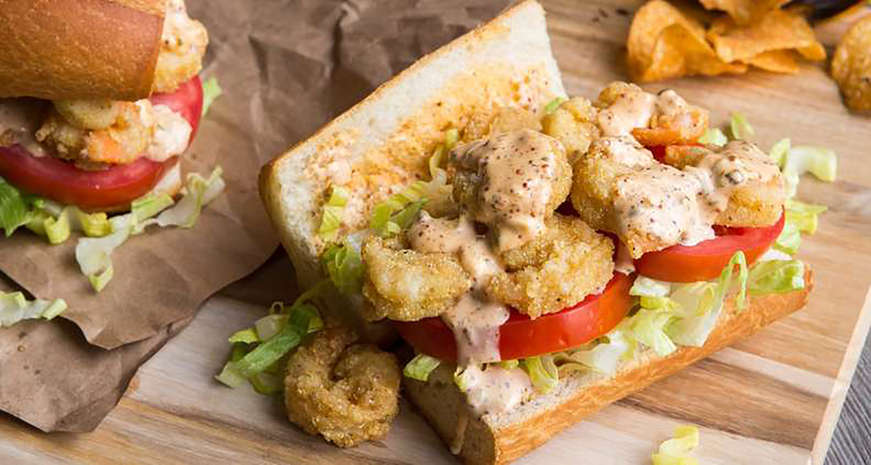 Who doesn’t love a good sandwich?  Po’boys and barbecue sandwiches quickly come to mind when you think of the South but there are plenty of other delicious options to choose from in the region. To celebrate National Sandwich day we’ve rounded up some truly Southern favorites.

Here is the official sandwich of every Southern state:

The mayonnaise-based white sauce has been topping Alabama-style chicken sandwiches since 1925 when a railway worker in Decatur, Alabama decided to start smoking barbecue in his backyard.

Throughout Arkansas you can easily find a fried catfish sandwich on the menu. Ask for hushpuppies on the side to complete the experience.

This sandwich is a Latin variation of a grilled ham-and-cheese sandwich that you can find throughout Florida. It is also known as a Cubano, and is pork, ham, Swiss cheese, mustard and pickles grilled between Cuban bread.

Don’t worry if you can’t make it to Augusta to eat the official sandwich of the Masters, it’s easy to make at home. Find the recipe here.

Louisville’s most famous sandwich was created in the 1920’s when chef Fred Schmidt topped an open-faced turkey sandwich with bacon and Mornay sauce.

Created in New Orleans in the late 1920s, a Po’Boy can be topped with everything including crab, crawfish and fried oysters but Louisiana’s favorite is a shrimp Po’Boy.

A late spring and early summer treat soft shell crabs are “any crab that has molted within the past 12 hours.” During this period of time the entire crab can be eaten with the gills and parts of the abdomen removed. Before it’s served on a sandwich the crabs are typically fried.

This delicacy can be found at the Big Apple Inn Restaurant in Jackson. The “smokes” are their version of tamales that are chopped smoked sausage sandwiches and vary in heat. If you’re daring enough try the pig ear sandwich.

Similar to a Po’Boy, the fried oyster sandwich is served on a bun instead of a French baguette.

Head to Hattie B’s in Nashville for this classic, spicy and flavorful sandwich.

After being seasoned, the brisket on this sandwich is slow cooked for eight to twelve hours and comes out so tender that it will melt in your mouth.

Topped with country ham and cheddar cheese, these biscuit sandwiches are then warmed up to create a yummy sandwich.

Get the recipes for our favorite sandwiches here