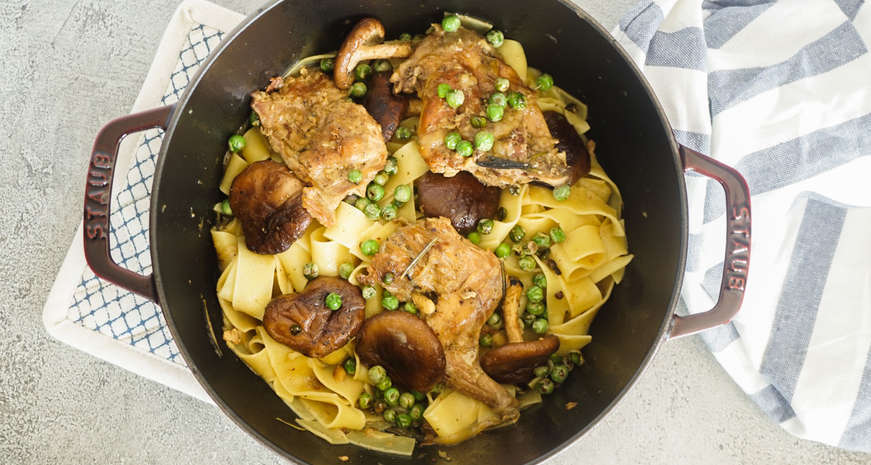 This braised rabbit pasta is the soulful, springtime stunner that'll get your tastebuds hoppin'

Whenever the word rabbit is mentioned, you likely picture a cute fuzzy bunny happily jumping around or mindlessly chewing on a carrot. While there is no denying that they are incredibly cute animals, rabbits are also a very nourishing protein that also happens to be delicious.

Here's how to transform it into a show-stopping dinner party dish.

I'll admit that developing a rabbit recipe in the middle of spring — a season with a ton of adorable bunny imagery — is perhaps a bit too on the nose (tail?) but never-the-less, rabbit is meat source that really should be on more tables across America. The first time I was introduced to rabbit was while I was enrolled in culinary school. To say I was squeamish about preparing it would be an understatement, but I had to pretend I was comfortable around my uber-cool classmates.

We were tasked with creating a braised rabbit dish. Because we had just studied pasta the week before, I decided to make a rabbit ravioli dish. To my great surprise my experiment was a complete success and I became an instant fan. The more I read about different rabbit dishes, the more I realized what an incredibly underutilized protein these four-legged animals actually are.

Not only are they higher in protein than turkey, chicken, pork and beef, they're also lower in fat and calories. Still, rabbits aren't yet readily available in many local grocery stores. The good news is that specialty markets or butchers usually have them, and they're more than willing to do the hard work of cutting up the rabbit for you — making it easier to hurry home and start cooking.

This braised rabbit pasta with cremini mushrooms and freshly shelled English peas screams springtime. It's a set-it-and-forget-it dinner that certainly takes some time to cook, but once it's ready, you'll have a new favorite that the entire family will love. 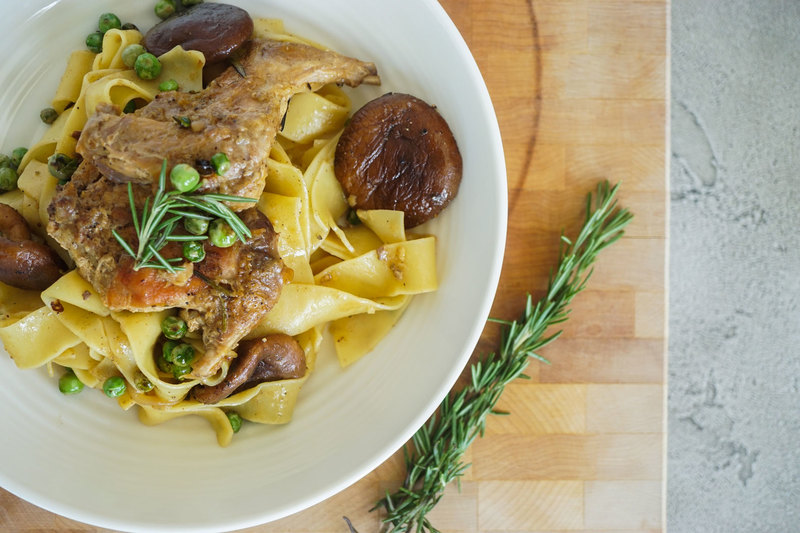 Braised Rabbit Pappardelle with Blistered English Peas and Cremini Mushrooms
Note: If you're unfamiliar with rabbit, you should ask your butcher to cut it up into six pieces for you. However, if you're ready to try this step yourself, you should separate the two legs, two arms, and slice the body (saddle) into two pieces.

Instructions
In a large bowl, toss the rabbit pieces with the flour, 1 tablespoon salt and 1 teaspoon pepper.

Heat 1 tablespoon of the oil in a medium Dutch oven over medium-high heat. When the oil is hot, brown the rabbit pieces, in batches, until a golden crust forms on all sides. Transfer the browned rabbit to a plate.

Add the chicken stock and the rosemary sprig, increase the heat back to medium-high, and bring to a simmer, scraping up any browned bits from the bottom of the pot. Once liquid is gently bubbling, return the rabbit to the pot. Cover, reduce the heat to low, and simmer until the rabbit is very tender, about 1 hour.

Carefully remove the rabbit from the pot and transfer to a plate. Bring the liquid left in the pot to a rapid simmer over medium-high heat. Continue to simmer rapidly until the liquid has thickened into a pasta-coating sauce, about 10 minutes. Set aside, covered, to keep warm.

While the braising liquid is simmering, bring a large pot of salted water to a boil over high heat.

Once you've got the water on, heat the remaining tablespoon of oil in a large skillet over medium-high heat. When the oil is shimmering, add the mushrooms and peas and cook, stirring frequently, until the peas are well-blistered and the mushrooms are browned, 5 to 7 minutes. (Some of the peas may jump from the pan; be careful!) Season to taste with salt and pepper.

When the braising liquid is reduced, add the rabbit back to the pot, along with the mushrooms and peas. Keep warm over low heat.

Drop the pasta in the boiling water and cook just until al dente, 3 to 5 minutes. Drain well, and then add to the pot with the rabbit and vegetables. Stir gently to coat everything in the sauce. Serve.

How to make bacon-y, cheesy pasta from pantry ingredients

How to make bacon-y, cheesy pasta from pantry ingredients