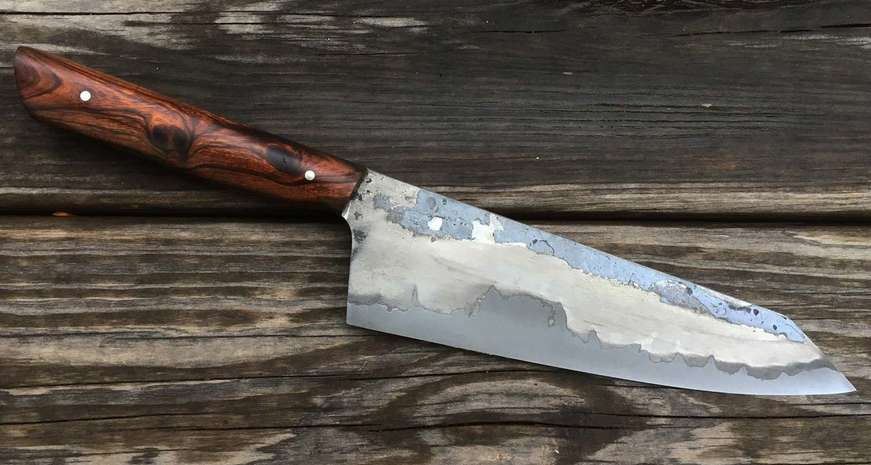 Before BootHill Blades was even an idea, much less a successful line of custom handmade knives and handcrafted wooden kitchen items, Kylee Thatcher and her husband Jared, a financial advisor, were living in Arizona with their children and decided it was time for a move. So the couple made what to them was the sensible decision on where they'd head next: They literally picked the town of Clarksville, Tennessee, randomly, on a map.

"We found a job that offered him a position and we moved, like two weeks later. We wanted a spot that wasn't super-hot or super-cold," Kylee said. "We didn't really want to raise any more kids in Arizona because it's pretty expensive and there's not a lot of country living."

That's not quite where BootHill Blades began, but it was the spark that started the Tennessee-based business. Kylee stayed home with their children, "doing the normal mom thing," while Jared continued his financial advising career and hunted deer in his spare time. One day, Jared brought home a deer, realized he had a "terrible" knife and figured he'd buy a custom-made blade. But after shopping around, he had another idea — he'd create one for himself. 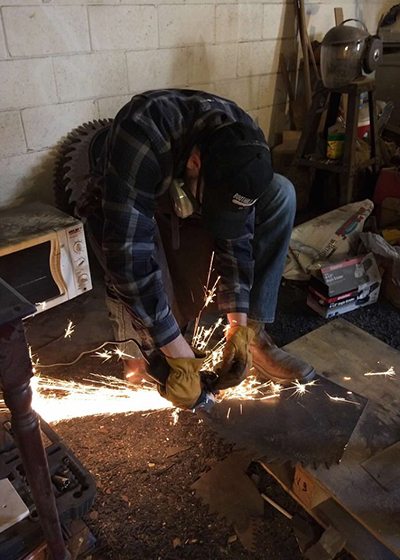 After spending what Kylee said were "hundreds of thousands of hours" researching how it's done, Jared purchased a set of basic equipment and began making hunting knives. Impressed with what he was able to make as a beginner, but also constructively critical of himself, he figured his knives would be much better if he got really serious about it.

He bought more equipment, then started experimenting with creating his own spoons, cutting boards and other wood items, but to him those extra items took too much time to create. "At that point," Kylee recalled, "I jumped in and said, 'Well I'm gonna play around with this wood stuff while you're making the knives.' We just taught ourselves and watched videos; that was about it."

Jared also contacted other knife-makers, in the U.S. and abroad, who would give him tips. They were given neighborly advice by the makers of Atlanta-based Bloodroot Blades, which, like BootHill, is run by a team of married business partners — two couples in Bloodroot's case.

They also sent knives to some "pretty big chefs," who critiqued them on what was good and bad. Chef Sean Brock was an early adopter, starting on the woodworking side. Admiring her craft, Brock had Kylee make items for his Nashville location of Husk, then had a few knives made by Jared. Once word got out that Sean Brock loved and was using their stuff, other restaurants wanted custom items as well.

Kylee said it quickly turned into a full-time gig. Jared did everything dealing with the knives; Kylee did the kitchen woodwork, making everything from utensils to cutting boards, serving platters and cake tins. They played around with the equipment, helped each other with their machinery when necessary and created quality work, which in turn created a solid reputation and new relationships with Nashville chefs and restaurants. The Thatchers were certainly beneficiaries of good timing, having moved to suburban Clarksville, Tennessee, just outside Nashville, as the area was undergoing a major culinary boom.

"We didn't know when we started that it was going to happen," Kylee admitted, but says it wasn't long before she and Jared were treated like family. "We didn't know these people were out there or what we got ourselves into. The food and accessibility to fresh ingredients through the farming community here is what we love. These people we've met at restaurants and farms, and things we've tied ourselves into because of what we're doing, are amazing." 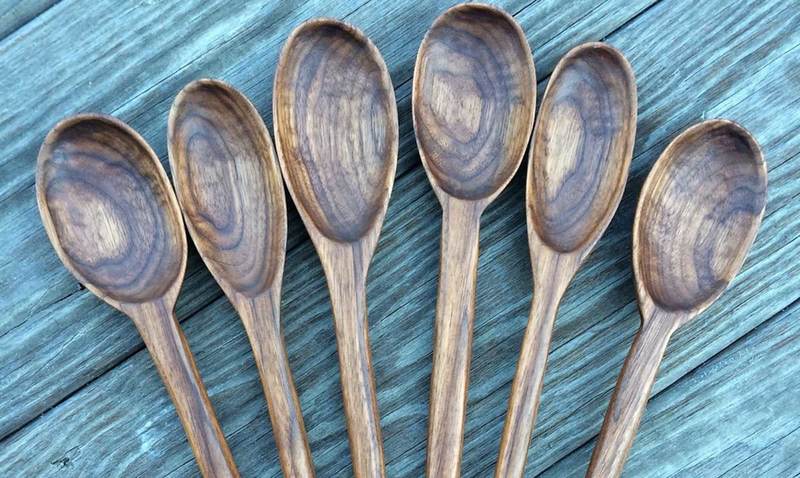 How amazing? They're currently working thorugh a waitlist for knife orders that goes well into December 2018. It's good news for them, but it might be a drag if you were hoping to have a BootHill Blade immediately.

There is, however, another way to get your own Boothill Blade much sooner, although it involves seriously good timing and a bit of luck. You can sign up for their email newsletter, in which they feature knives Jared decided to make and sell that month. Kylee said they usually sell out in 30 minutes, so you'll want to be timely. 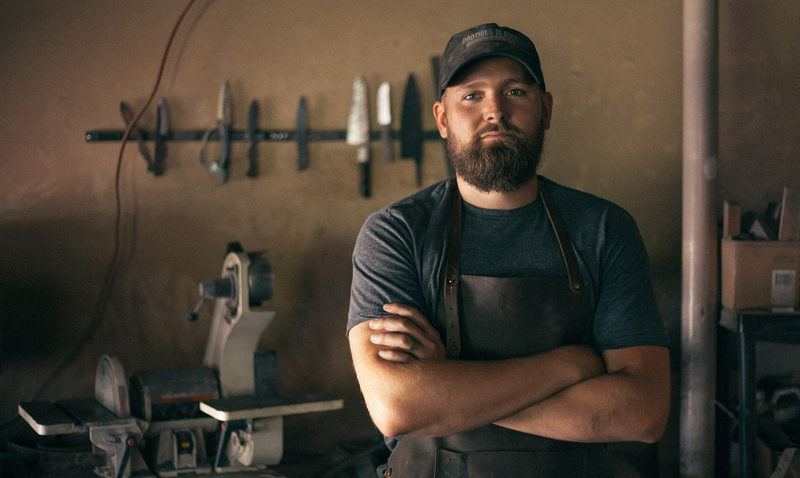 As they continue to create and try new things, Jared has started using different metals to make the knives. "We used to only use old files and old sawmill blades," Kylee remembered. "We used to put the file in a forge and hand-forge it with a hammer into the shape you wanted — making the knife out of it. And then he'd grind it down, shape it, put the handle together and put it on."

Now with a power hammer they've just purchased, Kylee's excited about being able to create more with less effort. "What we'll usually do is take a big round sawmill blade, take an angle grinder and cut little squares, depending on what knife he's using it for — smaller or bigger ones. He'll put it in the forge, heat it up really hot, then using tongs he'll hammer it with the power hammer and from hand-forging. We used to just cut them out but now every single knife is forged. We also have a kiln that keeps a certain temperature to get the knives to a certain hardness for whatever they're made for. Then there's heat-treating, dipping in oil, heat-treating again and straightening out." 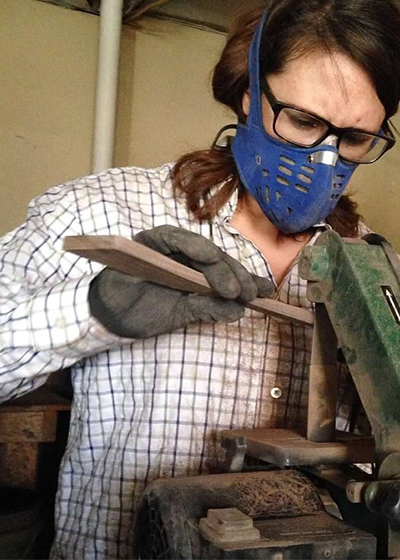 Kylee admitted that the most challenging aspect of doing business was "the physical part." "The actual physical labor we put into it is pretty rough, especially in the summertime. It's hot, it's stuffy. And we work in our garage, so it's hotter than outside, with no air flow. But it's easier to run the show when there are just two people involved. Luckily we just got a power hammer so that's gonna help him. I already have carpal tunnel; I sleep in braces."

The time and energy saved will help both of them create at their best. "Now we don't really help each other at all," Kylee laughed. "I do my thing, he does his, and we kind of mash it all together. We're in the same shop and most of our stuff is combined so we use a lot of the same equipment. We're both in with the same people in the same restaurants and industries; we just don't do the same thing. We're more of each other's second eye."

As for her part: "All my wood comes in 8-to-10-foot pieces, and they're all different widths. I cut whatever I'm using, then I either carve out what I'm doing or I just shape it on a grinder by eye. So every piece I'm doing is a little bit different."

Kylee uses mostly Tennessee walnut, maple and other hardwood from nearby. Metal files and materials for Jared's blades are sometimes found at local flea markets and antique stores, although he's also made blades and handles from client-provided material with sentimental value to clients.

"I think the reason I became so interested and didn't just do it as a hobby is because I have an extreme amount of love for the kitchen, in general," Kylee said. "Like, I love the kitchen, what comes out of it and everything about it: cleaning it, cooking in it, just sitting in it." 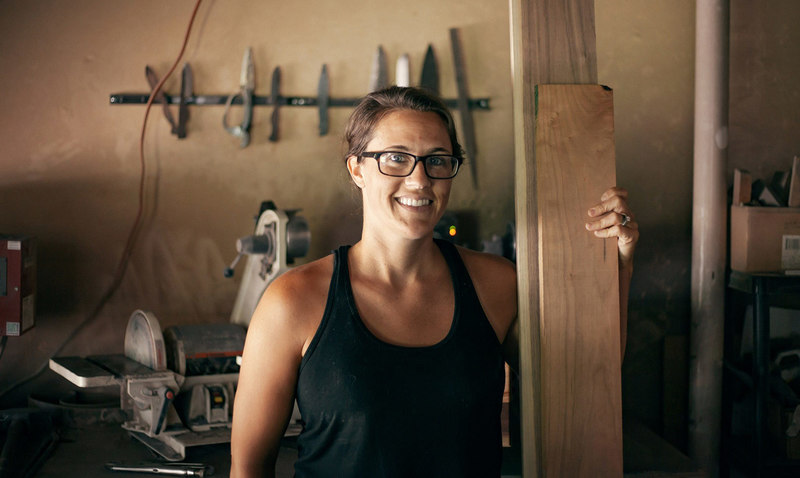 So the Thatchers will continue making some of the coolest kitchen items you can get, from blades to boards and everything they can think of to use around them in your home. And it's their inspiration, and yours, that keeps them going.