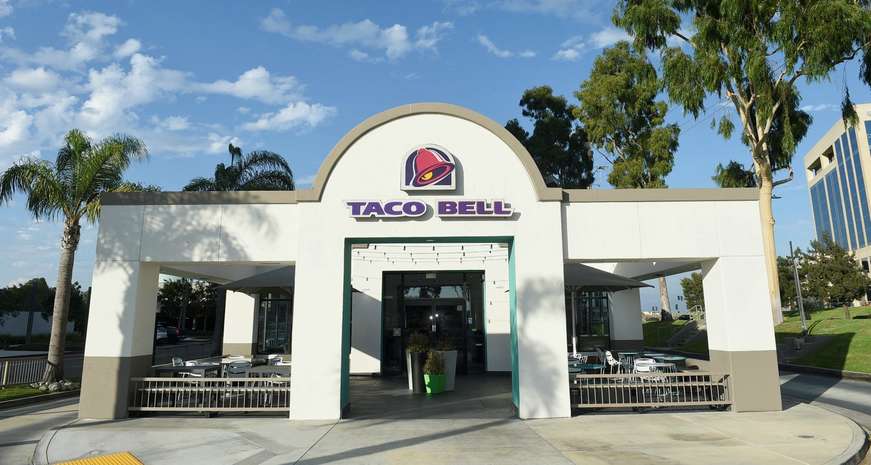 Count this among the things that should probably never exist: Chicken and biscuits from the Taco Bell drive-thru. But if you live in Indiana, you can now order a paper sleeve of triangle-shaped fried chicken mixed with triangle-shaped biscuits.

The chicken and biscuits come with either a sweet and spicy jalapeño honey dipping sauce or a nacho cheese dipping sauce. You're welcome to add Fire sauce to your order as well, which is likely a better choice than the others.

This breakfast menu item is part of Taco Bell's "Naked Chicken" line of menu items, which make use of what are basically pieces of fried chicken in the shape of tortilla chips. Additional new Naked Chicken dishes include a Crispy Chicken Quesadilla, Naked Chicken Chips with nacho cheese sauce, and a Naked Chicken "taco shell" filled with bacon and ranch. (This last item is only available in Knoxville, Tennessee).

It isn't the first time that Taco Bell has jumped on the chicken and biscuit train: In 2015 they launched a short-lived biscuit taco filled with your choice of sausage, egg and cheese; bacon, egg and cheese; crispy tortilla-chip breaded chicken with country gravy; or crispy chicken with jalapeño honey. The dish was widely panned. Our own chef Jeffrey Gardner tried in back during its release and remembers the taco as "a gummy insult to biscuits."

So it is telling that Taco Bell has lauched its trial run of chicken and biscuits exclusively in Indianapolis, not here in the South. Were the higher-ups scared of the blowback from legions of chicken and biscuit fans whispering, "Bless your heart," under their breath? We can only imagine the numbers of ancestors rolling in their graves.

But if these chicken and biscuits manage to find a following in Indianapolis, it'll only be a matter of time that it shows up in our rest areas and strip malls. Be ready.