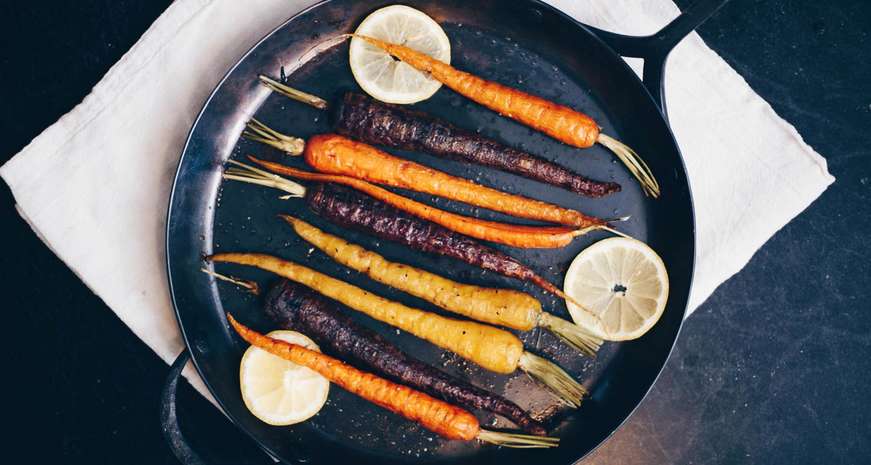 Though the Virginia-based blacksmith collective may not yet be a household name, Blanc Creatives has developed something of a cult following in the world of handmade heirloom kitchen products. Praised heavily by customers ranging from discerning home cooks to a variety of restaurants in the region and around the country, their high-quality carbon steel and copper cookware are worthy of your own pursuits of culinary art.

Many people have career fantasies in which they leave behind jobs for decidedly harder work, but a type of work they actually love. Not everyone makes such a leap of professional faith, and fewer still make a sustained living (much less a killing). But those who chase such creative callings usually have similar reasons why they chose their paths. They do it because they have to do it; nothing else will do. And there are few things more inspiring than when a group like Blanc Creatives finds success using its combined creative talents.

Blanc Creatives was started in 2009 by Georgia native Corry Blanc, who was raised in the Appalachian foothills of North Georgia, near Lake Lanier. With roots extending to New Orleans, Corry’s upbringing was greatly influenced of Southern food.

He recalls being pushed by a high school arts teacher to pursue art as a career. After considering college and several arts programs, he decided to join a family-owned metal fabrication business, finding metalwork to be a natural fit for his creative talents. He also worked in restaurants as a caterer, cook and server. He made friends in the world of food and beverage, and began noticing the ubiquity of carbon steel in restaurants. 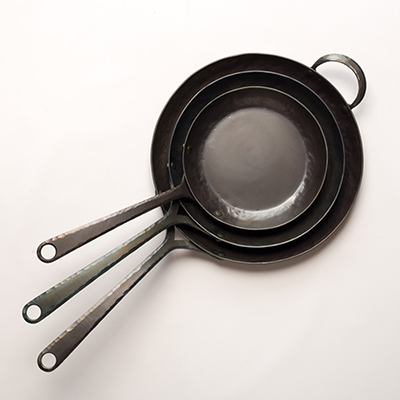 A standard of Southern commercial kitchens, many chefs find it to be somewhat lighter than cast iron, with a smoother cooking surface but a similar ability to take high heat. Existing somewhere between cast iron and stainless steel on the oven/stovetop spectrum, it’s got the best of both worlds.

Corry eventually found a position working for Stokes of England, a Charlottesville blacksmithing company reputed for premium architectural ironwork. But while working commissions for gates, light fixtures, fireplaces and more, he realized he wanted not only to do more but to also go into business for himself.

He began by creating similar works for his own clients until one day he decided to make a pan, just for fun. He hung the pan in a visible spot on his booth at a holiday market, just as a way to draw attention of passersby. They didn’t just notice – they made offers. And though he turned them all down, he realized he had something special.

Blanc Creatives business and marketing director Keith Freeman, who has been working with Corry for several years now, says this was when those restaurant relationships came in handy. “We started making pans for different chefs in the area and the design has changed a little over time. They came to us and said, ‘What we’re cooking with is great but they don’t last – they sit on the back burners a lot, they fall apart and they’re pretty unattractive.’ 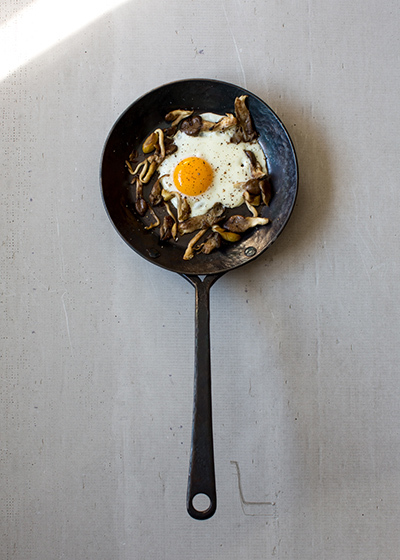 "We eventually landed on what we have now, which is something a little bit thicker than your [average] carbon steel pan. It’s designed with a longer handle and it’s got low side walls for kitchen use. We’ve grown that to about 12 pieces, mostly from feedback from customers and chefs.”

Freeman said it was important that their designs were informed by the hands of chefs. “We designed a  pan that was going to literally stand up and stand out in commercial kitchens. Then we kind of adapted that to the homeowners market.”

They follow a specific, intensive, 12-15-step process to create every carbon steel pan, skillet and roaster. It takes five to eight hours, and involves taking flat, circular steel discs sourced from a local foundry, pressing them between larger and smaller rings (to raise the side walls and create the rough beginning of a pan shape), then heating the “blank” in a forge and hand-hammering the sidewalls into shape. 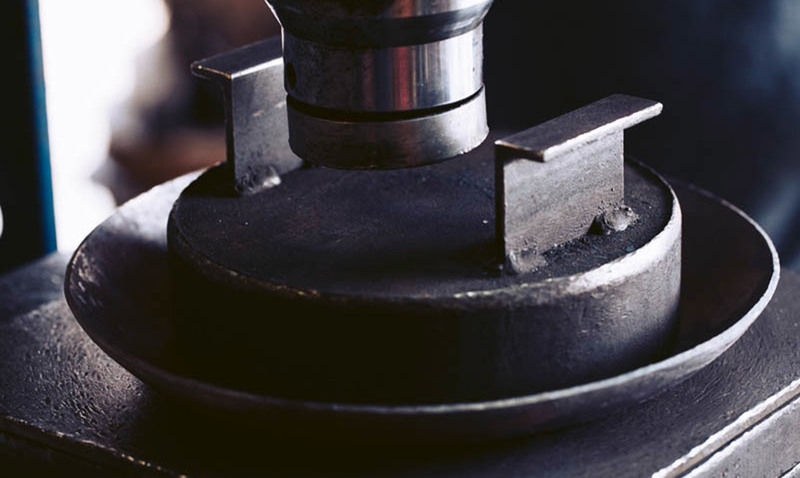 Once the side walls are even, the pan is pressed with 15 tons of pressure to flatten the base before a blacksmith knocks more detailed adjustments into the walls. A handle is added, then the pan is sand-blasted and wire-brushed before it is deep-treated and seasoned. Each pan is then baked for 30 minutes at 700 degrees, then soaked in coconut oil, which provides the beautiful dark blueish-grey layer of iron oxide which seeps into the metal’s pores at high temperatures and seals it from moisture. 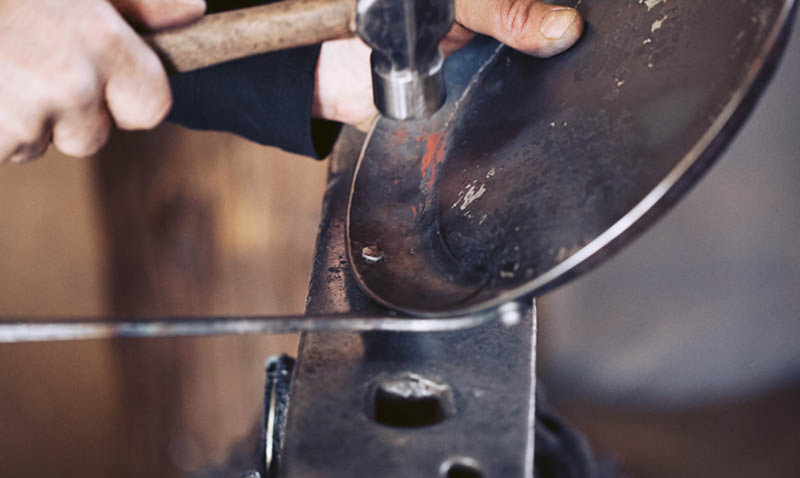 Freeman says this level of craftsmanship and dedication to quality are part of what makes Blanc Creatives products stand apart from cast-iron cookware. “The big important difference between what we make and other pans is it’s kind of a middle-ground product. A lot of folks are familiar with cast iron and we’re often mistaken for cast iron.

“With cast iron you’re basically taking 100% iron, heating it to liquid and pouring it into a mold. The trouble with that is you can’t design it in very many ways and it’s also pretty brittle, so it lasts forever but it’s really thick and heavy. What steel allows us to do is make a thinner pan that’s kind of like a sporty version of the cast iron. It’s going to cook the same way; it’ll season the same way but it’s a stronger material so it can be thinner, lighter and more durable. It’s kind of like a modern-day cast iron, in a sense.”

There are similarities between the two when it comes to cooking and care. Carbon steel pans are reactive, which means you’ll want to avoid things like soaps and acids (you don’t really want to cook tomato sauce in them) because it’ll break down fats that season the base and keep it nonstick. Carbon steel cookware’s searing ability, especially on meats and seafood, also parallels cast iron. “It really likes grease and to be cooked with fatty foods and oils. The more often you cook, the better off the pan will be,” Freeman said. 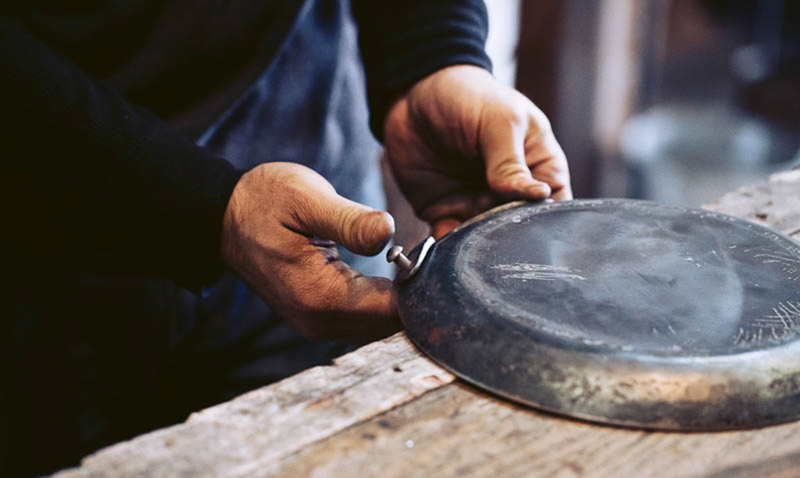 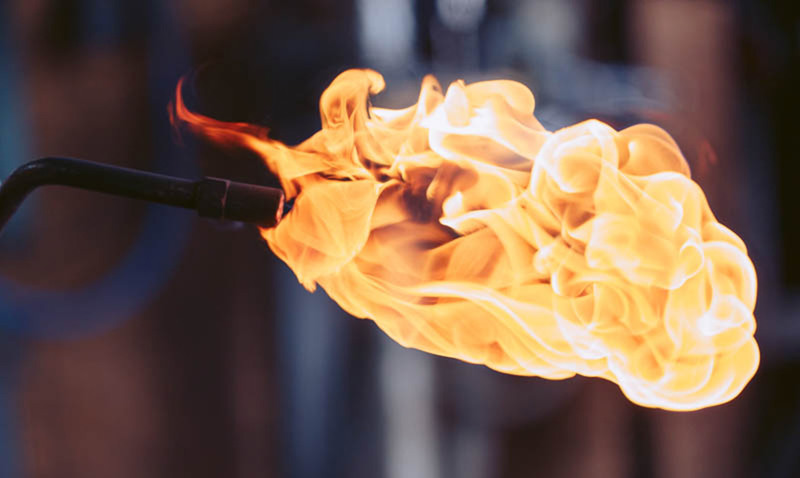 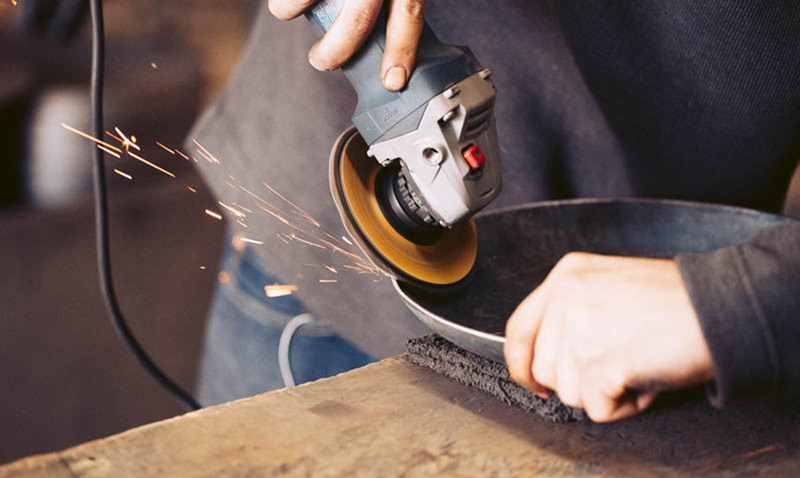 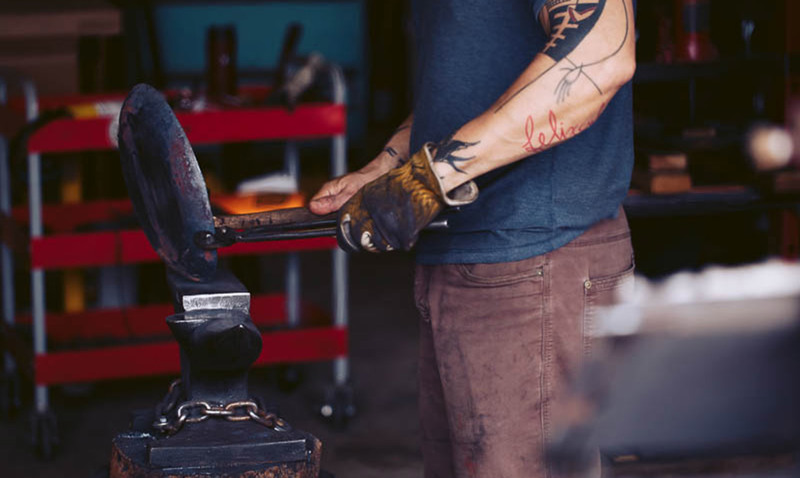 Freeman says they realize their cookware is at a more expensive price point but explains it with the amount of individual work that goes into making the items and the lifetime warranty. “You can get a steel pan for like $50 or $60, but here it was made by a real person and it’s going to last forever. And if anything ever goes wrong we’ll take care of it here in the shop, but there’s really nothing you can do to the pans. You can throw them out of a truck — it might get a dent or something but that’s about it.”

When Corry and the rest of Blanc Creatives aren’t creating their most popular selling items, in morning and afternoon shifts from their two-bay auto body garage in the Charlottesville community of Belmont, Virginia, they’re continuing to build new items, along with camaraderie outside work, as friends and neighbors. They even allow anyone with a credit card to buy beers for the team right from the Blanc Creatives website.

“We pretty much spend about 40 hours a week here at the shop and then we’re typically all together on the weekends hanging out in town. A lot of us live around each other — Charlottesville is pretty small town — so we typically stick around after work on our own side projects, woodwork and ceramics.” This explains why you’ll also see a variety of accessories occasionally added to the site, such as key chains, spatulas and spoons.

“The reason we all work here is because it’s a good place to be, good people and it’s fulfilling. A lot of us came from different backgrounds and used to make more money, but we’re happy to be here because it’s an artistic outlet. We’re all here with the same kind of motivation to make interesting things and be part of a good small team.

"It’s a good healthy mix, and we all want to grow this company collectively. It’s not so much about just having a space to work as it is about all of us investing our time and efforts into building the company up as much as possible.”