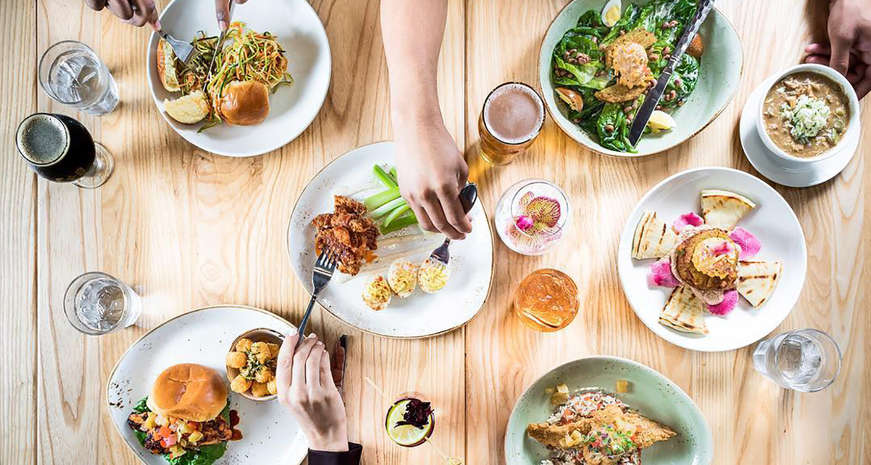 A dinner spread at Chicken+Beer, a Ludaris-owned restaurant in Atlanta's Hartsfield-Jackson International Airport

Hey Ya! Atlanta is the home for hip-hop and R&B legends and their restaurants

The song “Forever I love Atlanta (F.I.L.A.),” by Atlanta native Lil’ Scrappy, is more of a battle cry than anything else. This city has a well-earned chip on its shoulder, yet few others have produced more hip-hop and R&B talent. Atlanta is often overlooked by the rest of the country in music culture contributions, especially when compared to the New York and California scenes.

But Atlanta’s importance in the music world is undeniable. Whether we’re talking crunk, chopped and screwed, or soulful vibes, Atlanta’s artists literally do it all. Far from being just another city in the South, Atlanta has made a name for itself by being the birthplace of legendary music acts such as Gucci Mane, TLC, Usher, Ludacris, Ciara and, of course, Outkast, among almost countless others.

These hip-hop and R&B artists have not only changed the music game, they've also helped shape culture and provided an alternative narrative to life in "the dirty South." As a part of this trend, some have recently begun branching out and opening restaurants outside of the world of chain chicken wing spots. 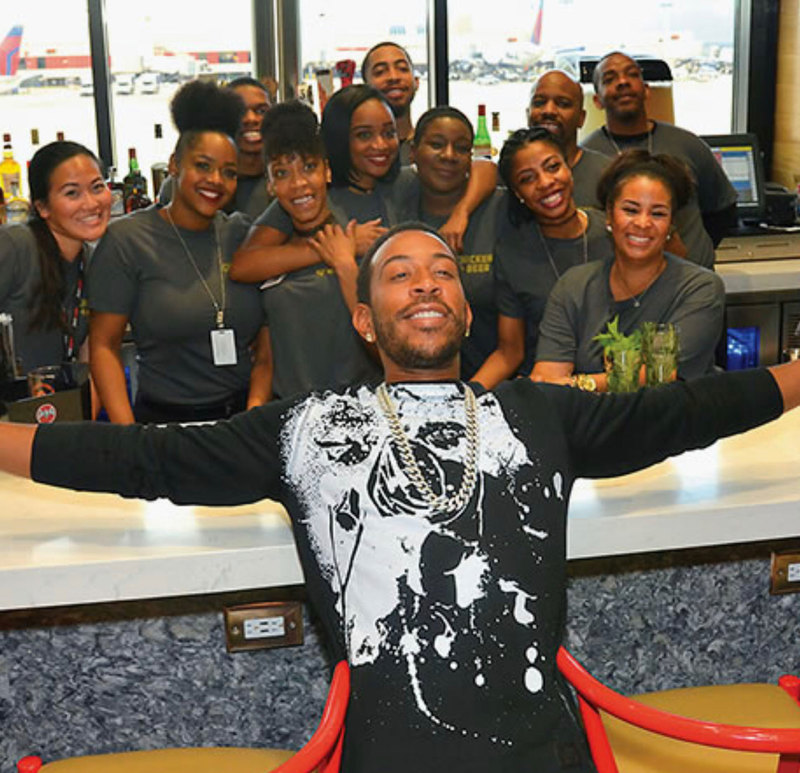 Chicken+Beer
Travelers from every end of the world come through Hartsfield-Jackson International Airport, many seeking the food and hip-hop culture synonymous with The A. And they don't have to actually leave airport to experience some of the best attractions that Atlanta has to offer —  they simply have to head to Concourse D and step into Chicken+Beer, co-owned by Chris Bridges, a.k.a. Ludacris.

Chicken+Beer came out of a friendship between Ludacris and beloved local chef, Todd Richards, who also owns a second fried chicken restaurant, in Krog Street Market, that bears his name. The restaurant, named after Ludacris's iconic 2003 album, is a veritable tourist attraction all on its own.

According Daniel Halpern, Founder and CEO of Jackmont Hospitality, which co-owns Chicken+Beer, Atlanta was the perfect place for this concept. "Atlanta was a natural fit to launch the Chicken+Beer brand, which blends a hip-hop soundtrack and a taste of [the city] with a restaurant that offers something truly unique, welcoming and energetic to our guests. … For many, Chicken+Beer is the first taste they’ll have of Atlanta, or [it's] a taste of home for those getting back."

Even if you’re not a deep-fried poultry fan, there’s something to try at Chicken+Beer. The restaurant goes beyond is name and serves a robust menu of  Southern hits such as gumbo, a collard green bowl and fried catfish, among many other tasty treats. 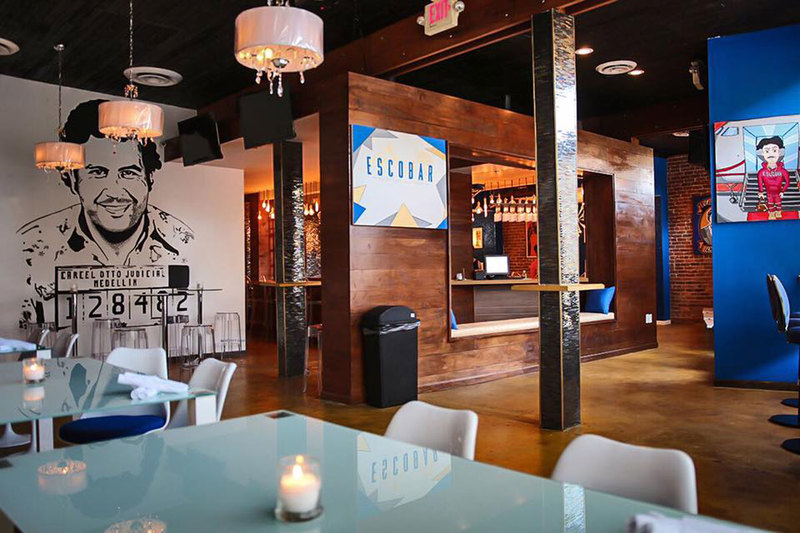 Escobar
Down a little past the massive new Mercedes-Benz arena, in the historic neighborhood of Castleberry Hill, Tauheed Epps, also known as the rapper 2 Chainz, opened Escobar, a global tapas-style restaurant, in 2016. But unlike Chicken+Beer, 2 Chainz's involvement in Escobar isn't obvious, save a dish dubbed the "Tity Boy Turkey Burger," after a nickname for the artist.

This eclectic eatery and hookah bar serves a global menu. Dishes include jerk shrimp, macaroni and cheese spring rolls, and twin lobster tails. The cocktail menu, however, is really where the 2 Chainz persona shines through. Should you find yourself at Escobar, you'll be offered cocktails like “1+1 = 2 Chainz,” which is made with a mix of Hennessey, green tea and agave nectar, or “The Grammy,” which features Four Roses Bourbon, Jamaican ginger beer and lime juice.

The restaurant, which is named after famed drug lord Pablo Escobar, brandishes the same bravado for which the kingpin was known. Massive paintings of the rapper adorn the walls as well as some of Escobar himself. One thing is for sure, 2 Chainz, who is not stranger to making headlines, is sure to be a fixture in Castleberry Hill for the foreseeable future. 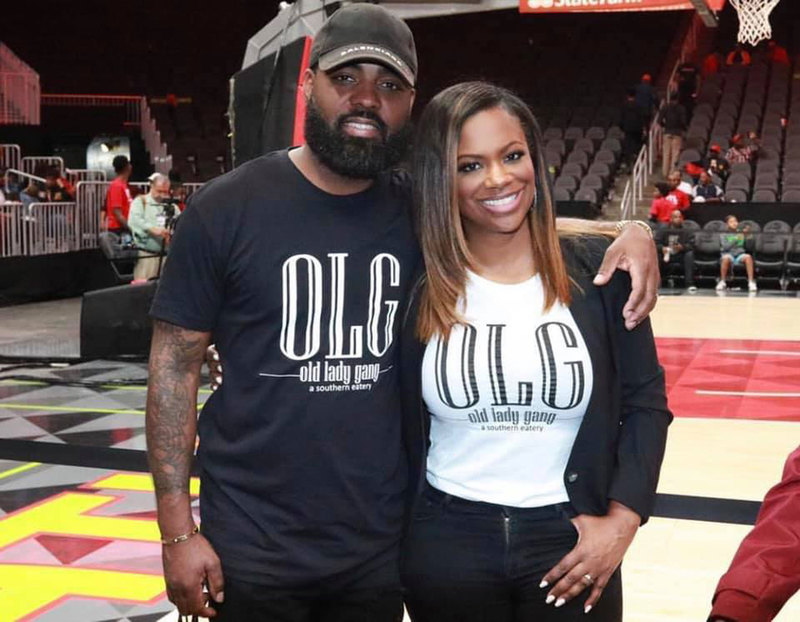 Old Lady Gang
From the outside looking in, Old Lady Gang — or OLG — looks like any other soul food restaurant. The faces of the brand are three older African-American women, but behind their images is the financial backing of R&B juggernaut Kandi Burruss, a former member of the super group Xscape. Burruss, born in College Park, has also had a name in some of the greatest musical hits of all time, including "No Scrubs," by TLC; "Bills, Bills, Bills," by Destiny's Child and "Shape of You," by Ed Sheeran.

In addition, Burruss is easily recognizable for her role as a peach-wielding character from "The Real Housewives of Atlanta," which airs on Bravo and continues to be the one of the network’s most popular television series.

Old Lady Gang was born when Kandi Burruss and her husband Todd Tucker decided that they wanted to enter into the restaurant industry with a concept that would showcase all of the singer’s favorite foods growing up, cooked by her mother Joyce Jones, who is, as you may have guessed, one of the three members of the OLG.

The OG OLG is located just down the street from Escobar in Castleberry Hill. Two new locations recently opened in the recently renamed State Farm Arena and at the Camp Creek Marketplace in East Point. Should you find yourself in the mood for down home cooking with an unbeatable music-driven atmosphere, you’d be hard-pressed to find a better location than here. 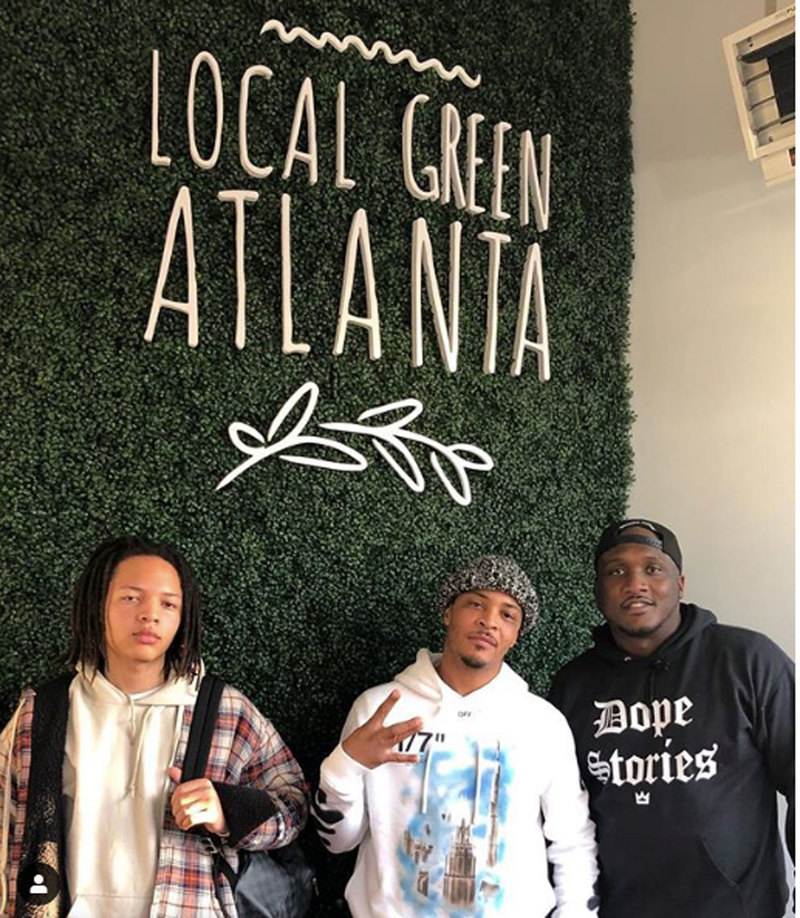 Local Green
Originally located in Southwest Atlanta, or the SWATs as it’s locally known (and now just up the way in Vine City), Local Green is a health-conscious fast casual restaurant hoping to change the way urban dwellers eat. Owned and operated by hip-hop legend Zachary Wallace, a.k.a. Big Zak, Local Green is more than food, it’s a mission to provide fresh, healthy food options for a community that is often overlooked.

Local Green started out as a food truck that made a habit out of parking in different spots within the SWATs to ensure that as many locals as possible had the opportunity to sample tasty fare. Its menu reads like a resume, as it highlights various artists with whom Big Zak has worked. There are the “Notorious” fish tacos named after the late hip-hop legend Biggie Smalls. A “Bad and Boujee” Tuna Wrap is a shout out to the latest rap stars Migos and last, but certainly not least, a "Kryptonite" smoothie named after perhaps the most well-known rap duo to come out of Atlanta, Outkast.

Here Big Zak is running a concept that is as much concerned with the community as it is with turning a profit. With his deep ties to the local neighborhoods and fellow hip hop stars, Wallace has used his voice to turn a spotlight on issues such as food insecurity and health issues within urban communities.

5 celebrity owned restaurants to visit in the South

5 celebrity owned restaurants to visit in the South