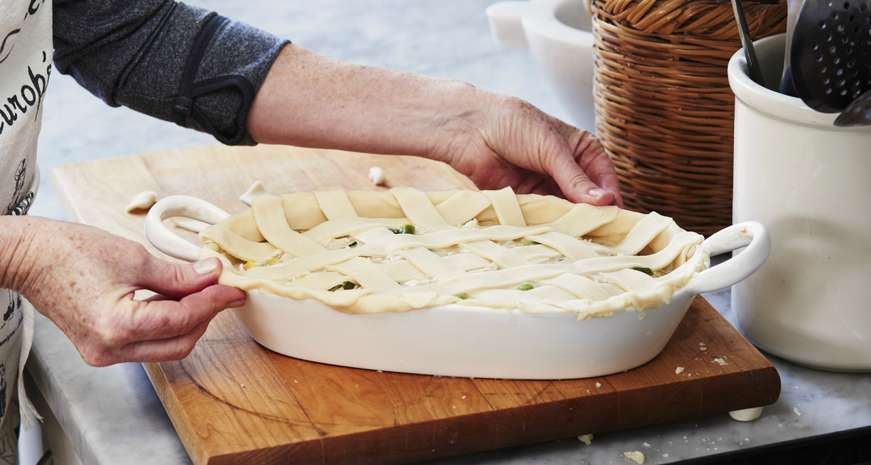 My sister Susan knows that chicken pot pie is meant for sharing. Many of you might not agree. Sharing this time-tested combination of chicken, vegetables and sauce covered in pastry might seem just too generous, too tempting to give away.

But Susan learned years ago that chicken pot pie is specifically designed to give to others. She preps, freezes and stores these pies until a friend is home from the hospital or has lost a loved one. She carries warm, freshly baked chicken pot pie to new neighbors on her street, and her grown sons have plucked them straight from the freezer to bake in their kitchens.

Still, it wasn't like she planned chicken pot pie to be her signature gift. It came along organically. "It all started when we would cook a whole chicken or a turkey," Susan said. "We ended up with lots of leftovers and my family got tired of it before it was finished." So Susan made a batch of chicken pot pies, froze them, and the rest is history.

"Chicken pot pie is the ultimate comfort food because it reminds you of a home-cooked meal from your mother's kitchen," Susan said. "It is filled with good ingredients and love." 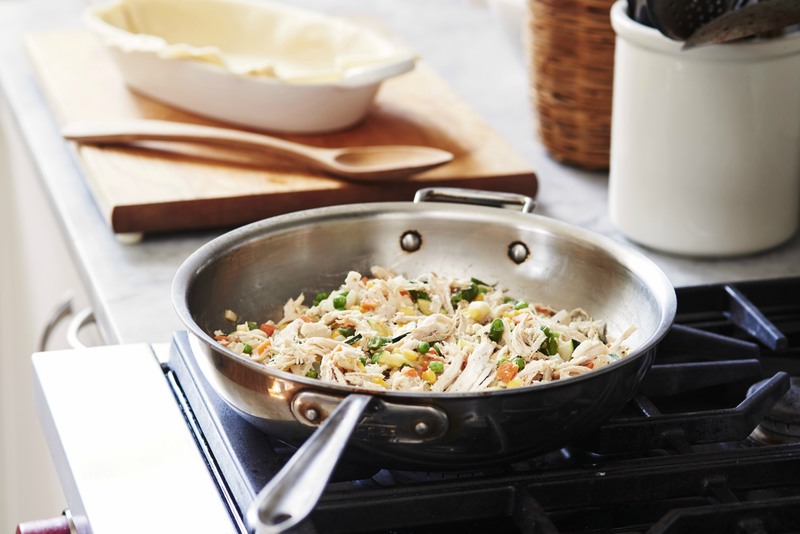 What can you bring?
Ten years ago, when I wrote the cookbook "What Can I Bring?", I searched for those recipes that people make and take with them to friends, to parties, to the office, to church, to the weekend getaway. Susan's chicken pot pie was one of the first recipes I included in the manuscript. And that chicken pot pie remains one of everyone's favorite recipes.

Pot pie — whether containing chicken or beef — is an American classic. It has appeared in print since 1792, according to John Mariani in "The Dictionary of American Food & Drink." The name comes from the pot or deep pie pan used to bake the savory pie. The formula is pretty simple: Cooked chicken, a roux of butter and flour, chicken broth, and chopped carrots, peas and other vegetables baked with pastry crust on the top and bottom. And it was a homemade staple long before Swanson's marketed frozen pot pies to the busy homemaker in 1951.

But let's be frank — I don't care how great the frozen pot pie is, you can taste the difference between homemade and store-bought. And in fact, this was another reason Susan created the recipe. She didn't want her pot pie to be based on canned soup. She wanted it to contain fresh, seasonal ingredients. "I didn't like the canned soup recipes for chicken pot pie," she said. "What makes this recipe nice is that it is healthy."

However, in the spirit of true confessions, Susan buys frozen crust for the bottom and uses a sheet of refrigerated store-bought crust for the top. "I am sure if would be even better with homemade crust," she added. Just another way this recipe is so darned flexible. Fresh or frozen crust, your choice of veggies, and chicken broth, homemade or straight from the can. 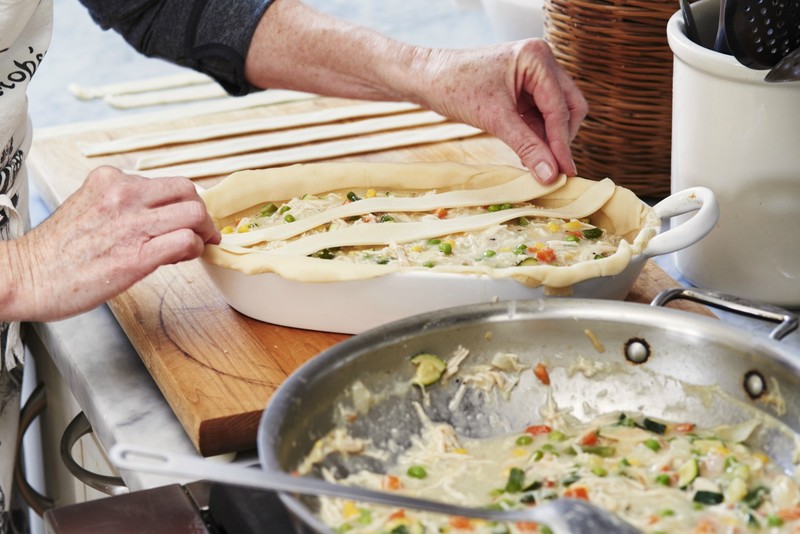 Three decisions for chicken pot pie
While Susan likes to make pot pie from leftover chicken or turkey, I love to cook chicken especially for the dish. This is your first decision to make: leftovers or freshly cooked? If you do cook your own chicken, choose a whole chicken or a mix of bone-in chicken parts. You want the bone in the chicken because it adds flavor and a natural thickening agent — gelatin — to the broth. Discard the bones and skin after cooking, of course. And if you do simmer your own chicken, you get a two-for-one: meat and homemade broth. If not, put a can of broth on your shopping list with the chicken.

Measure out 2 cups of that chicken for the pie. You can always refrigerate leftovers for sandwiches or salads, or you can freeze it. To maximize the broth's flavor, I will often add a teaspoon of chicken base or bouillon to the simmering chicken. This is a lazy trick I learned, and you don't have to worry about seasoning the broth with a ton of salt afterwards.

With the chicken covered, you're on to your second decision: the vegetables. Use a frozen combination of peas, carrots and corn, if you like. Or use all fresh, such as chopped carrots, fresh peas, asparagus tips, halved mushrooms, sliced leeks and even zucchini. You need about 1 1/2 cups vegetables, so use what you have on hand or what is in season. But avoid the broccoli and cabbage family because those veggies don't play nicely in pot pie. Their strong and assertive flavors take over the show.

And the last decision is the crust. It's up to you whether you want to buy it or make it, and I'll not get involved in this decision because for pie purists, homemade crust is essential. I get it. But for busy cooks who have gone to the trouble of cooking their own chicken and chopping fresh vegetables, reaching into the freezer or fridge to grab a crust make sense. Use what you like.

Then assemble the three components according to Susan's recipe. A trick is to run the baked pie under the broiler before serving so it turns golden brown. Vary the recipe as you become more comfortable with baking pot pie. Susan's latest experiment is smoked turkey instead of chicken — a nice change-up. And remember to add the love! 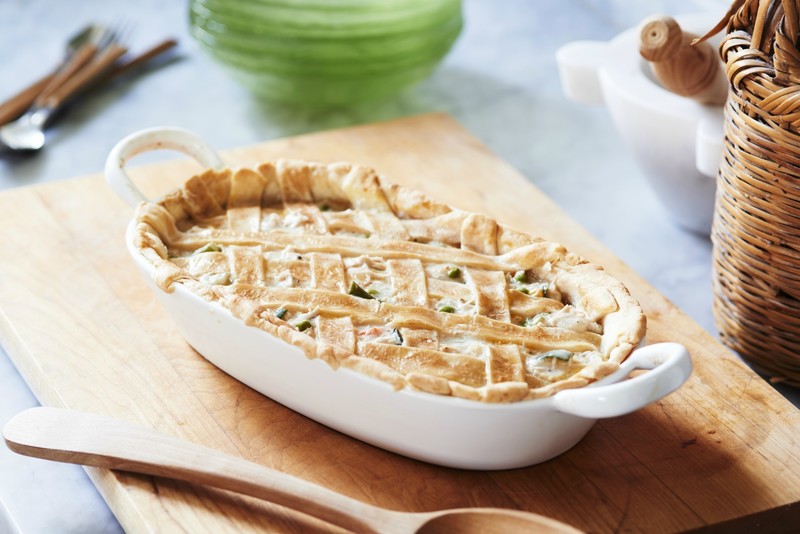 Instructions
Place a rack in the center of the oven, and heat to 450 degrees.

Place one pastry round in a 9-inch pie pan that is 2 inches deep or a small casserole dish. (If you use a casserole dish, you may need to use additional pastry to line the bottom and sides of the pan. Use enough pastry to overlap an inch over the sides.) Crimp the edge of the pastry with a fork, then prick the bottom a few times. Bake the pastry until it is well browned, 7 to 8 minutes. Transfer to a cooling rack and reduce the oven temperature to 350 degrees.

Pour the chicken mixture into the baked crust. Cover the top with the remaining pastry. (If you'd like, you can cut the top pastry into strips and weave it into a lattice over the top.) Press down around the edges, crimp the two together with your fingertips, and press around the edge of the pie with a fork to seal the top and bottom crusts. Make several vents in the top pastry with a sharp knife.

Bake until the crust is golden brown and the juices are bubbling, 20 to 30 minutes. If the pie seems done but the top is not brown, run the pie under the broiler briefly. Let rest for 10 minutes, then serve.

Make it fast or make it slow

Pure comfort in a casserole

Make it fast or make it slow

Pure comfort in a casserole