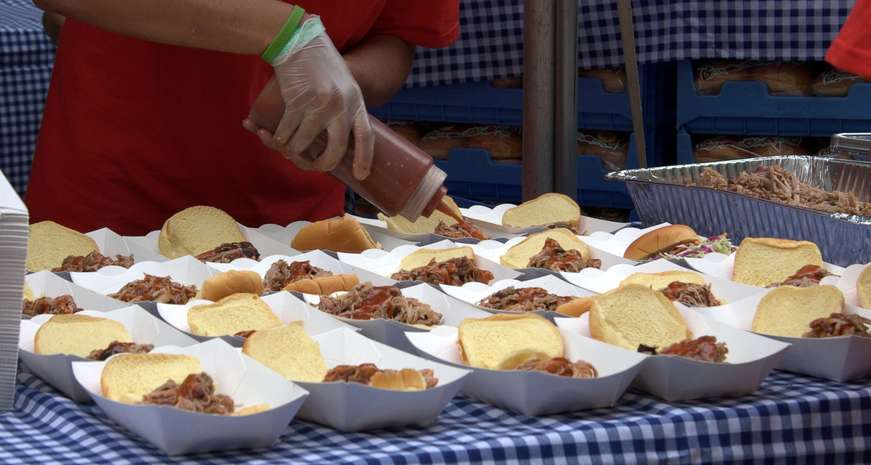 While we certainly don't mean to insult the great barbecue of Texas, Memphis and Kansas City, the Carolina region of the South holds the title for both the most traditional, and most regionally-specific styles and sauces. And nothing is more divisive in the Carolinas than barbecue sauce. Read on for a guide to the three key sauces of the region.

The technique of cooking whole animals low and slow over a flame — otherwise known as barbecue — is well-documented as a Native American cooking technique; however, the use of regionally specific sauces is a relatively modern phenomenon. It wasn't until commercialized barbecue stands and restaurants began opening up across the South in the early 20th century that those crucial differentiators packaged in squeeze bottles started to appear. Today, there is nowhere that these particular sauces are more important than in the Carolinas.

As food historian Robert Moss writes in his book, Barbecue: The History of an American Institution, regional barbecue specialties started to become codified during the turn of the 20th century. As more Americans began moving to cities, restaurants and food stands began popping up to help feed a more mobile workforce. For those in the barbecue business, it made good economic sense to cook and serve the livestock and produce that was cheapest and most readily available. And because at this time, refrigeration wasn't widely available, barbecue cooks needed to limit menus to that which could be cooked and sold within a short time frame. This meant that while 19th century barbecues tended toward large, rambling, potluck-style affairs, burgeoning barbecue restaurants stuck to a few simple specialties — one whole hog cooked per weekend and a couple of sides. These dishes and techniques became, over time, characteristic of that one restaurant or region. The sauces served alongside followed suit.

There are four distinct sauces (well, five, if you count the ketchup-mustard blend known as "rust gravy") served with barbecue throughout the Carolinas — vinegar and pepper, mustard, light tomato and heavy tomato — but it's really the first three that are most important to the region. We'll leave heavy tomato to Kansas City and call it a day. 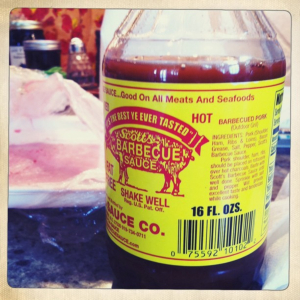 Vinegar and Pepper
This tangy, spicy sauce most frequently seen at barbecue restaurants in Eastern Carolina and South Carolina's northern coast (or Pee Dee region) is the mostly closely akin to the first barbecue sauces and mops used by Native Americans. These early sauces — made most frequently from butter, vinegar, salt and pepper — were used to baste the whole animals cooked over pits for traditional barbecue. In the Caribbean, where colonizers recorded the first such evidence of barbecue cooking styles, meat was basted with both vinegar and spicy pepper. As early as 1700, Moss has found evidence of colonists and their enslaved African cooks doing the same; they'd use a salty, vinegary basting sauce to keep the meat moist as it cooks, but would serve it sans sauce.

As barbecue became popular in the British colonies and, later, the United States, this same tangy, salty basting sauce was used fairly consistently. Early cookbooks, such as Lettice Bryan's Kentucky Housewife (1839) and Annabella Hill's Mrs. Hill's New Cook Book (1872), describe barbecue basted with this simple sauce and dressed very simply, with either lemon and butter (in the case of Bryan) or a little extra sauce (for Hill).

The earliest commercial pioneers of vinegar and pepper sauce were Adam Scott, of Goldsboro, and Bob Melton, of Rocky Mount. Both opened up in the decade after World War II, serving finely chopped whole hog barbecue dressed with a sauce made only from vinegar, salt and red and black pepper. These two men came to define the Eastern Carolina style and had lasting influence on the region. Scott's barbecue sauce is still sold today online and in grocery stores throughout the region, and Melton was named the "King of Southern barbecue" by life magazine in 1958. His restaurant remained open until 2005. 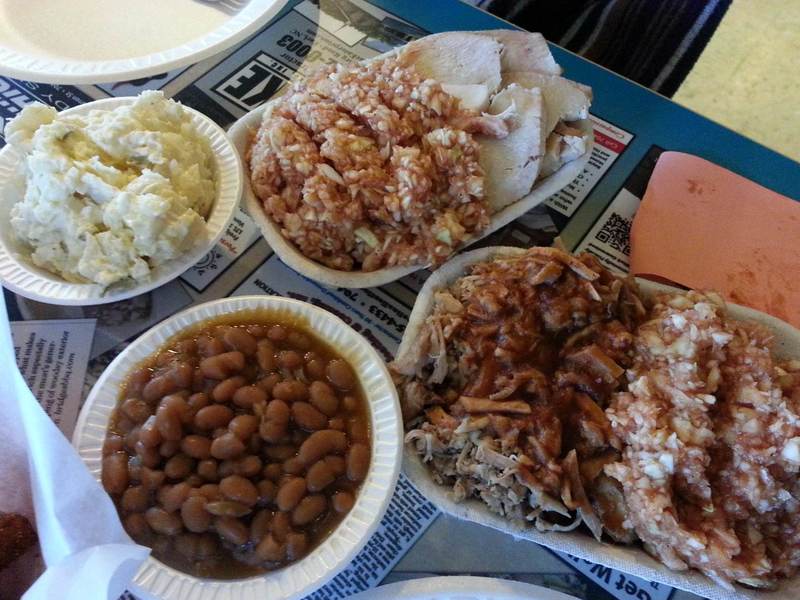 Light Tomato or Lexington-Style
The defining Piedmont and Western North Carolina-style barbecue sauce, which basically takes an Eastern-style sauce and adds just enough ketchup (or ketchup-like ingredients) for a little sweetness and body, came into use after the Heinz company began mass-producing what we today know of as American-style ketchup around the turn of the 20th century. Most writers and historians credit German influence for this sauce; German immigrants were influential in the region and preferred to cook with pork shoulders over whole hogs (another defining feature of Lexington-style barbecue), and they are said to have created the sauce to mimic the sweet and sour flavor of dishes from Germany.

This style of barbecue was commercialized in 1919, with the opening of two stands by Jess Swicegood and the two-man team of Sid Weaver and George Ridenhour, both in Lexington, North Carolina. This barbecue was, again, made entirely from pork shoulder, so it is a bit fattier and juicier than its Eastern counterparts. It is also typically much more coarsely chopped or even sliced, which may actually be a better explanation for the thicker sauce than anything else. Thin, vinegary sauces have a tendency to slough right off of large hunks of pulled or chopped pork; that little extra thickness from ketchup gives it just the body it needs to stay firmly in place on the pork. (But this is just one person's speculation!) 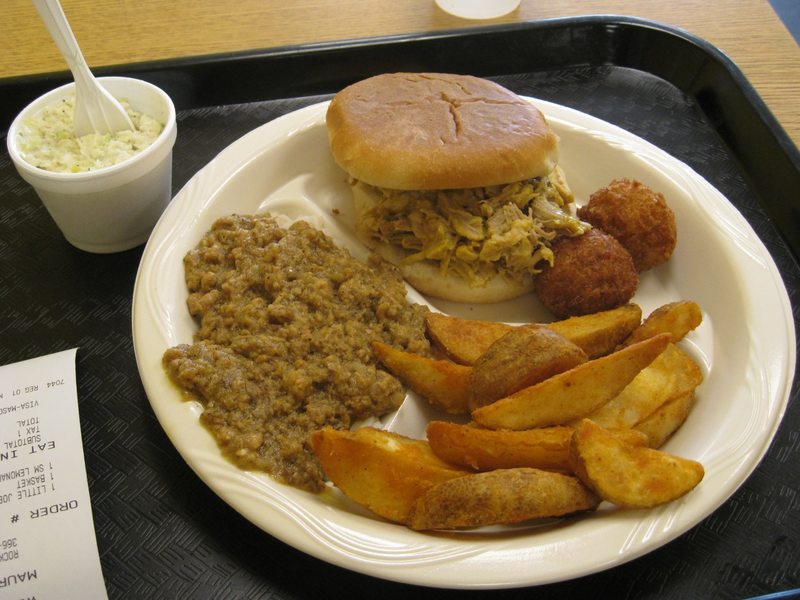 Mustard
The most contentious of all the Carolina barbecue sauces, yellow mustard sauce is a hyper-regional mixture native to the midlands region of South Carolina. While today you can find it popping up in other places in the South (B's Cracklin' in Atlanta serves a peach-mustard sauce), it has historically been a central South Carolina thing, and that alone.

Its history isn't well-documented; some give credit, again, to German immigrants (pork and mustard!) while others claim it was the creation of the now-infamous Bessinger family. Regardless, it was Maurice Bessinger, a devout white supremacist, who first commercialized the sauce and was responsible for its popularity in the region. By the late 1970s, it had spread from Newberry County (west of Columbia) east to Charleston, and north to Lake Marion and Lake Moultrie. Moss reports that he has found mustard sauce as far south as Jacksonville, Florida, and today, it's been slowly making its way further afield, but regardless of where you find it, mustard sauce is still neon yellow and tossed with chopped or pulled pork.

Whichever sauce is your preference, know that with every pulled pork sandwich, you're taking a big bite of Southern history.

A guide to the most famous Southern barbecue styles

A guide to the most famous Southern barbecue styles