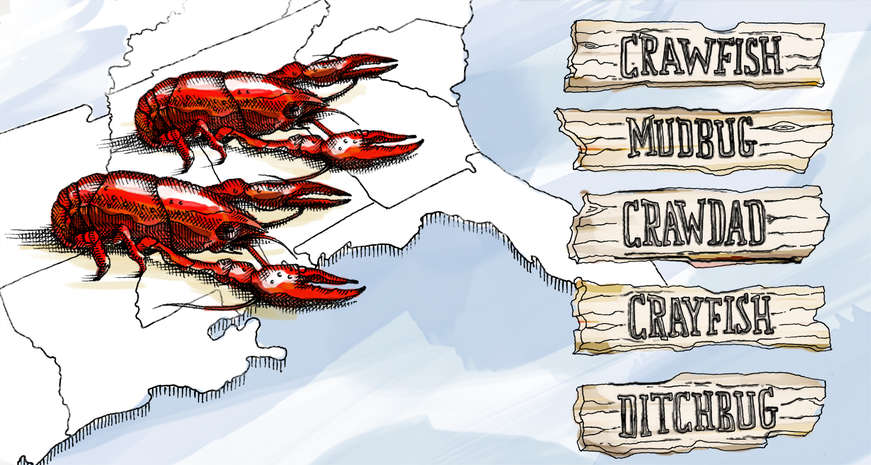 A ditchbug by any other name: Digging into the diverse culinary lexicon of crawfish

There are hundreds of species of crawfish in America’s creeks, rivers and ponds. Sometimes it seems like the names we have for them are just as numerous. From the clinical and scientifically accurate “crayfish” to the more colorful “mudbug” to the more obscure but no less entertaining “ditchbug” or “crawpappy,” the nomenclature of crawfish is a linguistic melting pot. But where did these terms come from — and what do they say about the person who uses them?

Sam Irwin grew up in Breaux Bridge, Louisiana, a little town with the big title of “Crawfish Capital of the World.” Irwin’s roots in crawfish culture run deep: not only was his grandfather instrumental in building the crawfish industry in St. Martin Parish, but also Irwin himself has become the unofficial authority on the little crustaceans — he literally wrote the book on them. And, after decades of studying the history, culture and industry surrounding Procambarus clarkii (the scientific name for these creatures), Irwin knows one thing for sure: out of the dozens of regional nicknames we’ve given these critters, “the term ‘crawfish’ has won out,” he said.

To get to the bottom of the matter, we turned to one of the most ambitious and fascinating studies of American linguistics: the Dictionary of American English (DARE), a record of the ways in which dialect varies in communities around the country. DARE fieldworkers surveyed over one thousand American communities to explore how words and language evolve throughout time and place, asking informants questions that ranged from physiology (“What do you call large front teeth that stick out of the mouth?”) to insects (“Any names for an extra-big mosquito?”) to, yes, a certain aquatic critter (“What do you call the small, freshwater crayfish around here?”).

Over one thousand people answered with more than 40 different ways to refer to the critters, from the expected (“crawfish” and “crawdad” were most common) to the, er, less so — we’re looking at you, folks who volunteered “water dogs” or “gumbadies.” The diversity might seem astonishing, but George Goebel, DARE’s Chief Editor, said this is actually a pretty common theme when it comes to underwater-dwelling critters. “One of the areas in which regional variation seems to be especially alive and well is in names for fish and other aquatic creatures,” he said. “So, this variety of names is not at all surprising.”

We dug through the data from DARE, and added a little anecdotal evidence from Irwin himself, for a complete look at where these terms came from, both etymologically and geographically. Here’s what we found.

According to Alan Davidson’s Oxford Companion to Food, the term “crawfish” was coined some time in the 19th century. Currently it reigns supreme in American English, with a pretty far-reaching proliferation throughout the country. The term is most likely a derivation of “crayfish,” but with a twist based on the crawfish’s tendency to, well, crawl.

DARE notes that its use is “widespread,” but particularly so west of the Appalachians and throughout the South and Midlands. In Louisiana, home of the crawfish industry and the epicenter from which America’s fascination with crawfish grew, “the general term that everybody uses is ‘crawfish,’” said Irwin. (Though that’s not always been the case: Irwin notes that in the ‘50s, there were still about 1 million Louisiana residents, the Acadians, who spoke French as their primary language. They called the crustacean by its French name, écrevisse.)

“Crawfish boil” is an equally widespread term. “Probably the way most people get introduced to crawfish is at a crawfish boil,” Irwin said. “They pour the big orange red crawfish out, you drink some beer, you peel the tails.” It’s perhaps the most recognizable dish to come from crawfish country, and no matter what you call them, it just might be the best way to introduce newcomers to a real Louisiana delicacy.

This is the original term from whence most of the other derivatives sprung: it’s a variation on the aforementioned French term, écrevisse, which is possibly a riff on an Old German word for “crab,” krebiz. Despite its etymological significance, “crayfish” is a little more likely to elicit a raised eyebrow or two; it’s not terribly common, and only about 5 percent of DARE’s interviewees provided it as an answer to the survey.

You’re not likely to encounter a Southerner who calls them this, especially not in Louisiana. In fact, the term even drew some controversy from Times-Picayune readers in New Orleans, according to Irwin. In the ‘70s and early ‘80s, when the farm-raised crawfish industry was just starting to boom, “journalists were starting to write about them [more], and you’d see them going back and forth between ‘crayfish’ and ‘crawfish,’” he said. “I found letters to the editor in the Times-Picayune from people arguing about which was the better term to use.” DARE’s map shows the usage scattered throughout the country, with few to no occurrences in the South but a few popping up near the Great Lakes, Midwest and New England.

Some might associate this folksy term with the Deep South, but DARE’s files portray the term as mostly west of the Appalachians, with a heavy concentration in central states like Indiana, Missouri, Illinois, Texas, Oklahoma and Kansas. Some reported usages span all the way westward to California. Louisiana, though? Not so much.

“Saying ‘crawdads’ is not common in Louisiana,” Irwin said. “Usually the folks I hear who use that word, they’re kinda country, though sometimes it’s hard to tell if they’re using it in jest.”

Kentucky fiction writer Nic Brown said crawdads seemed to be the prevailing term in his hometown of Manchester. “Everyone I knew called them crawdads,” he said. “There was a small creek that ran through a little hallow near our home. I know that my friends also called them crawdads, and some of them would catch them and try to keep them in used Cool Whip tubs full of water.” Brown added that, in his neck of the woods, the critters were seen more as a part of the natural fauna than culinary commodity.

Meanwhile, in Texas, “crawdads” are both part of the lexicon and the cuisine. Houston, home to one of the country’s largest Vietnamese populations, is the epicenter of a multicultural crawfish zeitgeist. Vietnamese restaurant owners put their spin on the classic crawfish boil by adding lemongrass and ginger to the boil, and serving the crawfish with butter and garlic. Try it for yourself.

“Crawdad” also has a couple curious cousins, including crawcrab, crawdabber, crawjinny, crawldaddy, crawpappy (in the Ozarks) and craydad. Perhaps one of the more notable uses of the term comes in lyrical form, courtesy of Oklahoma-born Woody Guthrie’s “Crawdad Song.”

Little etymological information exists for this affectionate slang term, and while it’s a memorable one, it’s not necessarily common. Only one individual in DARE’s survey cited it as a proper response. “All our earlier evidence for mudbug, and also ditchbug and swamp bug, is from Louisiana or eastern Texas,” said Goebel, adding that DARE’s earliest evidence of the term is from 1955, but references probably predate that. In fact, author Mary Land invoked the phrase in her seminal 1954 Cajun and Creole culinary text, Louisiana Cookery, in a recipe called Pixilated Mud Bugs — essentially, a pound of crawfish boiled in beer and “served with more draught beer.” (“Pixilated,” in this case, references an arcane term for being tipsy.)

These days, though, you’re more likely to witness it printed on a billboard, T-shirt or laminated menu than in casual conversation. “I suspect it was never anyone’s everyday term for crayfish, but an occasional joking term that is now used to intrigue outsiders and create a conscious local identity,” Goebel adds. Joking or not, Irwin told us that just a few decades ago, crawfish farmers were actually discouraged from using the term at all. “In the ‘80s, the price of rice dropped really bad and farmers needed another crop, so they increased their crawfish production,” he said. To help farmers gain a foothold, the Louisiana Department of Agriculture consulted with a marketing firm for help raise awareness of crawfish as a food commodity. “That firm said, ‘Do not use the word “mudbug” if you want to have a larger marketing presence.’”

Shreveport, Louisiana apparently didn’t get the memo — that city is home to Mudbug Madness, an annual festival that draws crowds in the 50,000-range by boiling the eponymous critters en masse alongside live Cajun and Zydeco artists.

The crawfish’s success story is an unlikely one. This runty aquatic creature, at a glance, looks a bit like a poor man’s lobster, without the prestige of its elite New England brethren. It’s ugly. It lives in the mud. It’ll try to pinch you if you come too close. But over the past few centuries, these humble, scrappy, mud-dwelling critters have become a cornerstone of Southern tradition and heritage. The crawfish is perhaps the reigning king of freshwater crustaceans south of the Mason-Dixon, and the catalogue of names we’ve bestowed on it is reflective of the South’s own cultural melting pot (or, for our purposes, stock pot) of foodways and people. Its story is just as colorful as that of the South which they, and we, call home. And that — whether you call them mudbugs or crayfish or crawpappies; whether your go-to method of eating them involves a carefully constructed etouffee or a boatload of seasoning and a lot of cold beer — is something we can all agree is a beautiful thing.