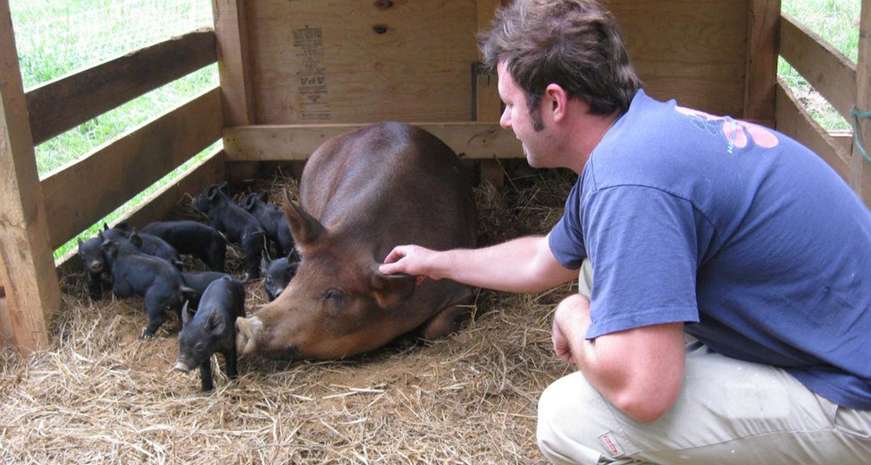 A Charlottesville Pitmaster’s Stand: Brian Ashworth of Ace Biscuit & Barbecue on rejecting racism and the power of comfort food

In towns around the country, it’s not uncommon to find members of the local restaurant industry involving themselves in community activism when hard times occur. In the case of Charlottesville, Virginia, it was Brian Ashworth, owner and pitmaster of Ace Biscuit & Barbecue, who recently took a stand against racism at his restaurant, and in the process became a voice of unity for the city after violent protests resulted in tragedy.

A man named “Wolf” answered the phone at Ace Biscuit & Barbecue on the morning of Wednesday, August 16, 2017. Despite the events which occurred just a few days prior, he was pleasantly energetic, with the sort of friendly voice that sounds familiar to complete strangers. I found out his name when I asked if he was the owner, Brian Ashworth. “Nah,” he replied, “I’m Wolf – the face of Ace.”

Though Wolf wasn't the man I was looking for, he was happy to take my name and number. I'd hoped to speak with Ashworth about the previous weekend, when rival groups of protestors showed up on the streets of Charlottesville to publicly express their opinions on the removal of a statue of Confederate General Robert E. Lee.

Wolf also advised that Ashworth might not immediately return my phone call. After all, Ace had been very busy since Sunday, August 13, when Ashworth confronted and ejected a group of neo-Nazis from his barbecue and soul food restaurant’s parking lot for displaying “Hitler salutes” in view of customers.

“We've done a lot of business from it,” he said of the resulting spike in business since word spread that he’d forced the white nationalists to leave Ace, “but I just think the reason for it is very unfortunate.” 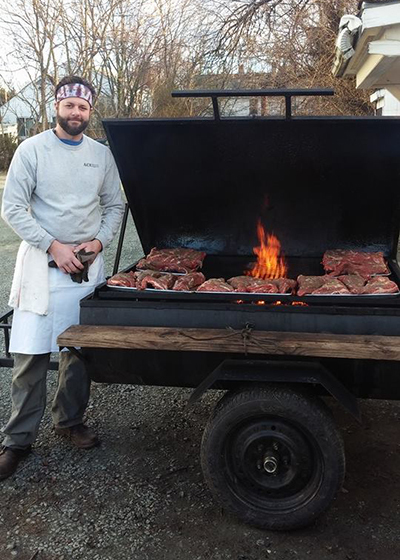 The limits of hospitality
Ashworth was also suffering a bit of media fatigue. He has been interviewed by several national media outlets, including CNN and NPR, since the incident. "I started turning away everything, pretty much, because I can't really even tell the story anymore without being upset at myself for telling it again,” he said over the telephone on Friday, August 18. Still, he was gracious enough to return my call and had plenty to say about what he witnessed, and what Charlottesville experienced.

“I don't want to take another financial hit like that — I basically had to close down the entirety of last weekend because of it. Moving forward, we all just have to pay closer attention to who wants to have events in town. As a city, I think that any kind of events like the ones we had last weekend need to be vetted way more carefully than they were. Security has to be more of a presence.”

He also said Charlottesville is “not going to be a welcoming town” to extremist groups in the future. “We were initially but now it's for sure: We don't want them back. I can't necessarily speak for everyone in Charlottesville's restaurant business, but I know that if the neo-Nazis and KKK come back to town, I'm just going to close my restaurant the whole weekend. That way they don't have the opportunity to come back to threaten me again, or insult me again, or even eat the food here. Cause they're all vowing to come back. And as a hospitality-based industry, how hospitable are we going to be?

“I'm the kind of guy where if I can't do it with a smile on my face, it's not going to happen. If they come back, they aren't going to be eating. It's unfortunate, but that's just the way it's going to go. I have a feeling that a lot of other restaurants in Charlottesville feel the same way.”

Native son
A former executive sous chef at the downtown Charlottesville Latin American restaurant Zocalo, Ashworth calls himself a “cook” instead of a chef and explained that he opened Ace Biscuit & Barbecue in 2012 because he prefers preparing “simple, straightforward foods without a whole lot of fussy ingredients or techniques.” And though he attended both traditional college and culinary school, he said he learned the craft of barbecue through first-hand experience.

“I'm more of an agrarian person: put my hands on it, start to finish, and see the finished product. I have been cooking for about 25 years professionally and I've been barbecuing with my dad since I was a little kid. It's like any kind of education: You get out of it what you put into it. And now here I am, running my own restaurant and wondering what's next.” 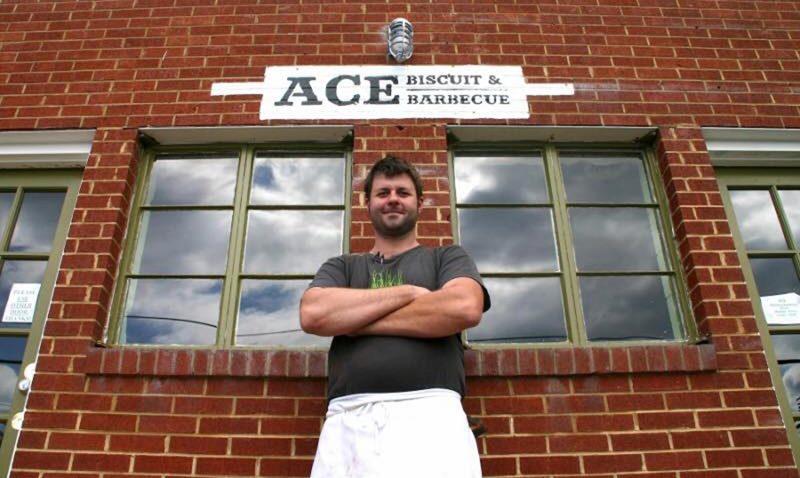 Describing the Charlottesville restaurant community as “tight-knit,” he said friends and peers have begun contributing to charities and developing new ones through which they are making donations in the name of Heather Heyer, who was killed when a motorist drove a car into a crowd of demonstrators. “I want to contribute to something like that, but I'm not sure exactly how yet,” he said. “I can't say that I've experienced anything quite like what we just experienced. I think that's why it's still so bizarre and shocking.”

For now, Ashworth says he'll keep doing what he knows best: cooking and serving comfort food in a city that could use a helping or two. He said he’s got his own style of barbecuing — one that matches his go-my-own-way personality and doesn’t easily fit into established regional categories.

“I can't say that I'm North Carolina style or Kansas style or anything like that, because I've never worked for another pitmaster or in another barbecue restaurant. I love to tell people it's "Rose Hill barbecue", which is the neighborhood that my barbecue restaurant is located in. It's got the middle school I went to when I was a kid, the high school I graduated from and my restaurant all in the same community, right here in Charlottesville.”

Bridge-building barbecue
Meats at Ace are wood-fired using oak, hickory and maple that Ashworth personally cuts from his own farm. For first-timers, he suggested the pulled pork sandwich (which he considers a litmus test for any serious barbecue restaurant), and said Ace’s fried chicken and waffles is extremely popular with fans of soul food. There are also two biscuit dishes he personally recommends: the pit-smoked brisket biscuit (topped with caramelized onions, cheddar cheese, spicy barbecue sauce and egg), and the Ol' Dirty Biscuit with fried chicken, sausage gravy, homemade dill pickles and house-smoked pimento cheese. 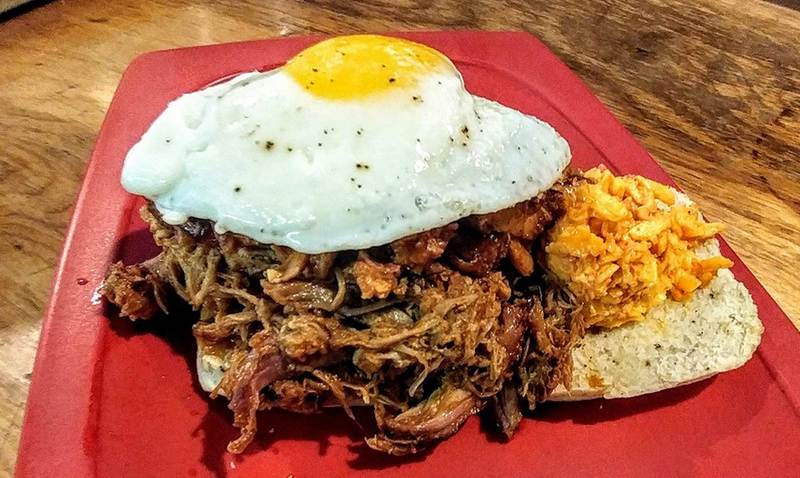 When asked if he thinks barbecue, with its well-known powers for bridging gaps between people of varying races, classes, cultures and other differentiating factors, can be instrumental in healing the city after the negativity seen in the protests, he said he hopes so. 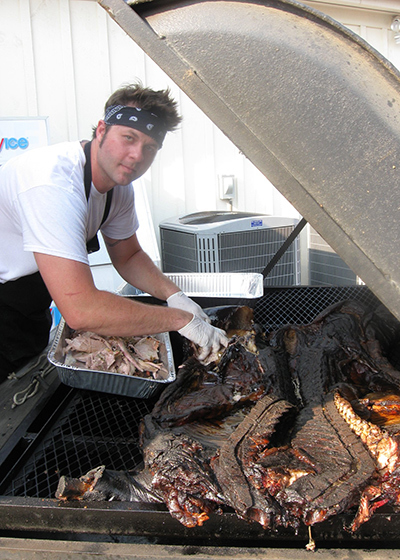 “Traditionally that's exactly what it is — something that brings communities together. It would bring everybody from all points of life to stand around a hog and pick the meat they wanted from it, and put it on their plate. Whether it be politicians, standing on their soapbox at a big, huge barbecue, or at the church feast, it brings everybody together. That's what I want to keep doing, even though there are forces out there apparently trying to draw us apart these days. It's a labor of love, but it's good.”

So as Ashworth, Wolf, and the rest of the team at Ace Biscuit & Barbecue continue serving food that represents the neighborhood — and standing up for his customers’ rights to feel safe and comfortable while patronizing his restaurant — he said he’ll keep uniting Charlottesville residents and visitors who come in peace and bring their appetites. And while he believes getting to a better place will take time, as a Virginia-raised pitmaster he knows that a little time and consistency are just part of what it takes to turn good things great.

“We all know the South has some extremely negative history,” he said. “But in towns like Charlottesville, on a daily basis, I think even before this event people were conscientious to keep with the positive, moving forward in our little community. This is only going to strengthen our resolve.

“There's no turning back in society now. We have to go forward together, as one, you know. And barbecue would be a perfect centerpiece for that.”