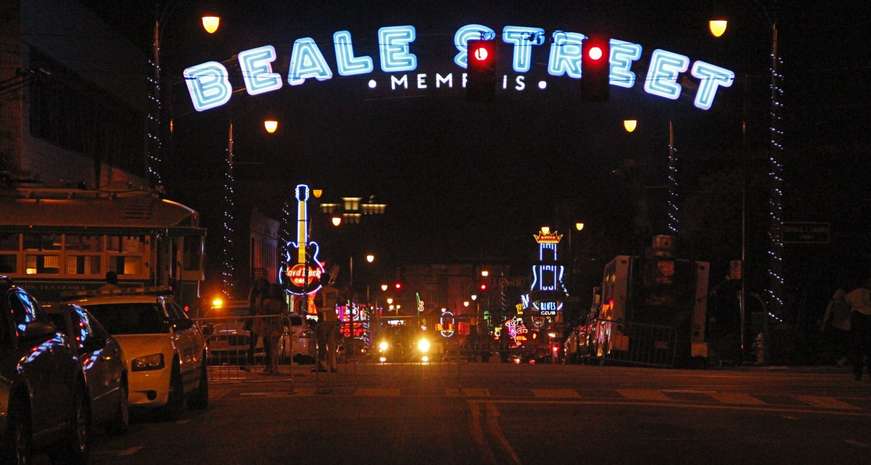 The entrance to Beale Street in Memphis

Interim Editor-at-Large Mike Jordan recently traveled to Memphis, Tennessee, for the World Championship Barbecue Cooking Contest, with a little help from automaker Chevrolet, which provided transportation in the form of a new, tricked-out loaner truck. Between big bites of delicious barbecue, blues music and glimpses of the historic Southern town, here are Jordan’s notes from the Memphis in May road trip.

If you’ve ever been to Memphis in May, you know how vibrant the Tennessee city’s Riverside Drive becomes when the monthlong celebration sets up next to the Mississippi River.

Last May was my first time being in Memphis in more than a decade, and the only time I’ve ever visited during the festivities. I drove up from Atlanta in the very cushy Silverado High Country, listening to Atlanta rap group OutKast and other Southern hip-hop, my generation’s version of the blues. It’s a beautiful ride that ran through Birmingham on Interstate 20 West and passed Oxford, Mississippi before arriving at the Peabody Hotel, just around from Beale Street.

I walked into the Contest entry point at the Beale Street entrance, at the corner of South Second Street. Hungry from the trip, I stopped in at Blues City Café, for what was supposed to be a simple snack but ended up being a half-slab of wet, hickory-smoked pork ribs, which I wolfed down so quickly I almost ruined myself for the rest of the trip. 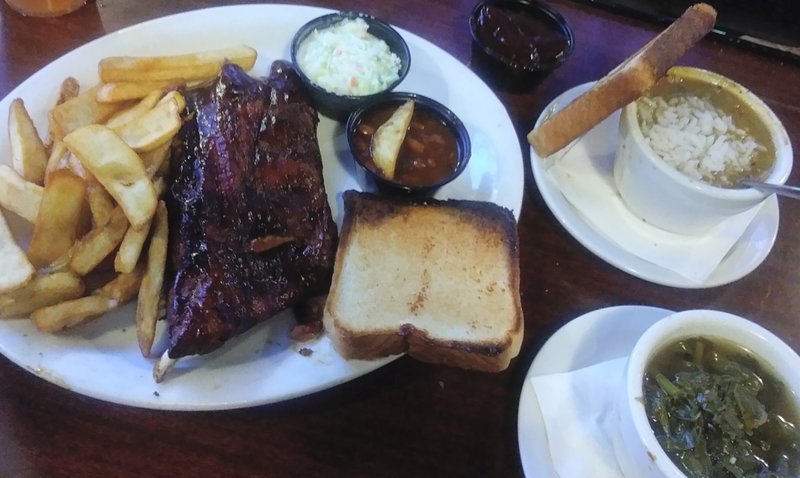 Blues City Café is known for those ribs, as well as having had some major recording artists grace the stage, from BB King and Al Green to Smashing Pumpkins and Jack White. They’ve also been visited by a long list of general celebrities and politicians, including President Bill Clinton, Dave Chappelle, Robert DeNiro, Jimmy Paige, Jerry Seinfeld and “too many players from the NBA to mention.” Bobby Flay has featured the restaurant on his Food Network show, and the Travel Channel put Blues City and its ribs on its “A Taste of America” program. Not a bad start.

I left the Café with considerably less energy than I had when I entered, and decided to burn off the calories by taking a long walk along Riverside. I remembered that Big Daddy Kane was performing during my stay, but I had my days wrong; tonight’s music would be provided by longtime Beastie Boys resident deejay Mixmaster Mike, who spun records the whole crowd enjoyed with a bit of turntable showmanship that hip-hop kids like myself always appreciate. After staying around to snap a few photos, I turned in to save up for the next full day. 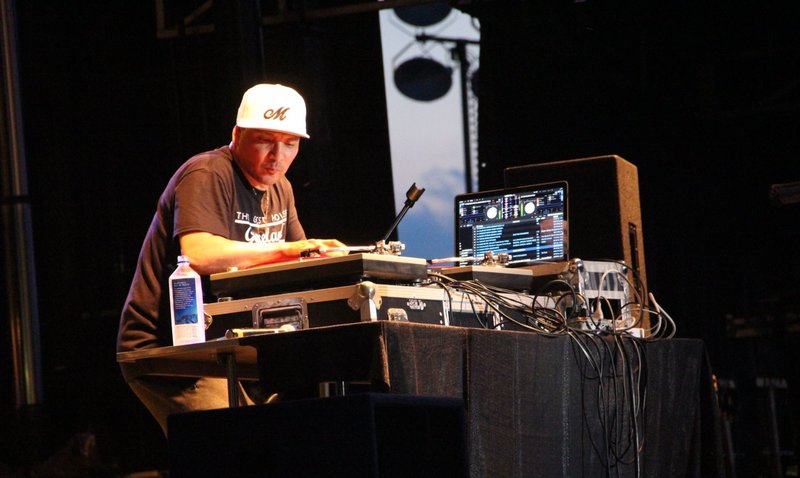 The World Championship Barbecue Cooking Contest is kind of messy, and not just because of the sauce. It’s not really clear where you’re supposed to go or what you need to do, other than eat barbecue and find your way eventually to BBQ Alley. I ended up missing a lot of people I knew, including my good friend Adam Evans (former executive chef of Atlanta restaurant The Optimist), and Jared Smith, a member of the Smokin’ Gavel Competition BBQ crew, who also happens to practice law in South Pittsburg, Tennessee, and helped my dad get his smoker for a restaurant we’re opening this summer. I’d love to see Southern food festivals get their acts together because there’s so much growth opportunity in organizing events in an easier-to-understand fashion. To be honest, I never know where to go and what to do when I visit these festivals. Everyone yells at you to come eat this, try that, bite this, put this in your mouth. It becomes a bit much.

Another thing I noticed, in total honesty, was the level of obesity I saw at the contest. There were so few slim people, and so many more people who were overweight. At a certain level, you feel a sense of responsibility for the promotion of Southern comfort foods, which we know are meant to be enjoyed in moderation. But I wouldn’t bring it up here if it weren’t overwhelming. It wasn’t appropriate to take photos of people and share them here, so I hope you’ll take my word for it when I say I saw enough people who were morbidly obese to shake my certainty in what I do for a living when I write about some of the South’s more indulgent traditions.

The website WalletHub does an annual ranking of America’s Fattest Cities. In 2016, Memphis came in first, right behind Shreveport, Louisiana. This year, Shreveport came in second, with Memphis in fourth. (Little Rock, Arkansas, “won.”) So it’s progress, sure, but it’s not nearly a good sign when you do the math. The total score when Memphis was in first place was 76.97 on the “fatometer.” In 2018, Memphis’ number rose to 79.92. So it’s not that Memphis is getting any healthier — it’s more like America’s relationship with unhealthy eating is getting worse. Shreveport scored an 80.72. Little Rock had 81.03.

Oh, and 16 of the top 20 American cities were in the South. You can look at the study, its methodology and its main findings here.

That made me wonder, and wander. I found myself walking more, all through the downtown area, until I got to a place my friend Kevin Alexander, a James-Beard-Award-winner, told me I had to visit: Earnestine & Hazel’s Sundry Store. He named it “America’s Greatest Burger Dive Bar,” and I have to agree there’s nothing in the country quite like it. That’s because it was once a brothel. There’s an amazing burger that’s light on beef, with a griddled bun and plenty of grilled onions, and is sinful enough to make you wonder just how crazy the building with the crooked staircase used to be, back when it was likely a completely different type of establishment. Oh, Memphis, you beguiling devil/temptress, you.

I left there and strolled around, finding murals like this one: 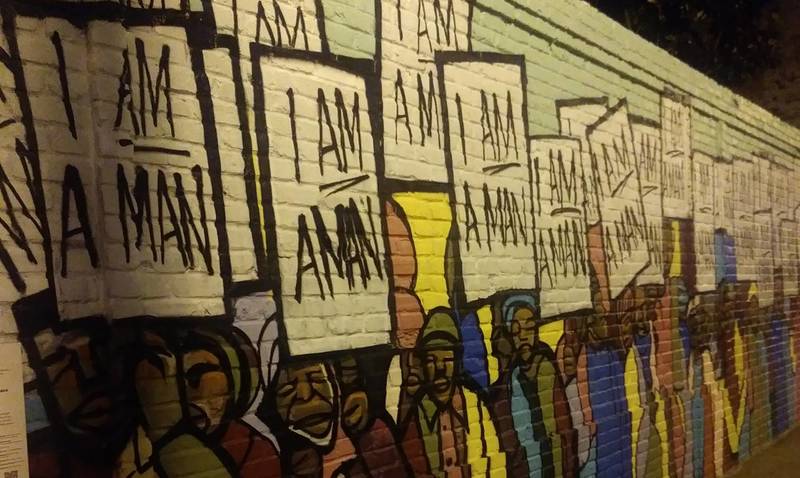 The next day, I visited the National Civil Rights Museum at the Lorraine Motel, where Dr. Martin Luther King was murdered by a domestic terrorist. And while riding in the Silverado High Country to the museum, I realized how downtrodden the city is, outside of the central tourism district. 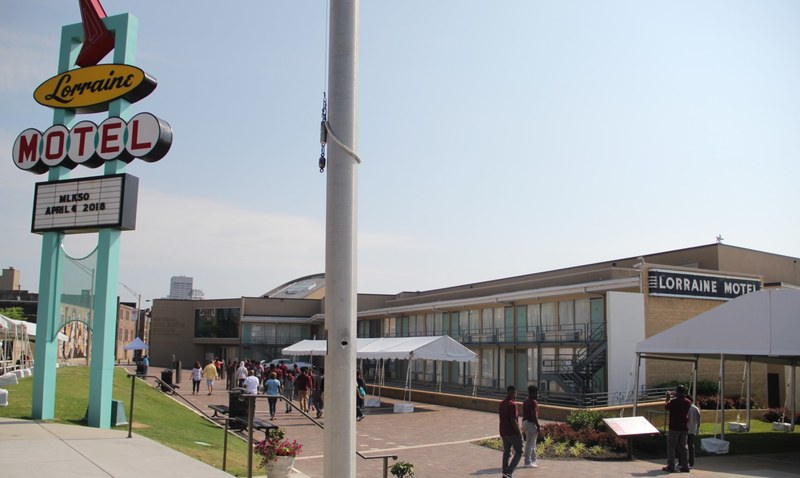 It reminded me that we all have a sense of responsibility for the places in the South where so much history exists. It made me remember that, as a black Southerner who was born in Tennessee, raised in Alabama and became an adult in Atlanta, there is so much more work to be done, particularly in this day and age. And it made me feel a sense of regret that food, when promoted to an extensive level, is just another form of institutionalized passivism. We live in a region that has come to accept the assassination of one of humanity’s greatest examples of righteousness, and in the process we’ve become comfortable eating ribs and listening to music filled with sorrow.

I could go on, but I’d rather not. I’d prefer to visit Memphis again sometime in the future, because I left with the feeling that so much of this beautiful riverside city is cursed with a mentality that feeds into an unhealthy lifestyle, and a second trip soon might help clarify things. Being from the South, I know that people fall into bad eating habits, and that such situations can’t be easily blamed on those who are considered victims of what we’ve been told is part of our Southern heritage.

It was all a bit much. So I checked out of my hotel early Saturday morning and ate breakfast at Memphis’ oldest café, The Arcade. And when I tell you it was one of the best omelets I’ve ever had, I want you to trust me. 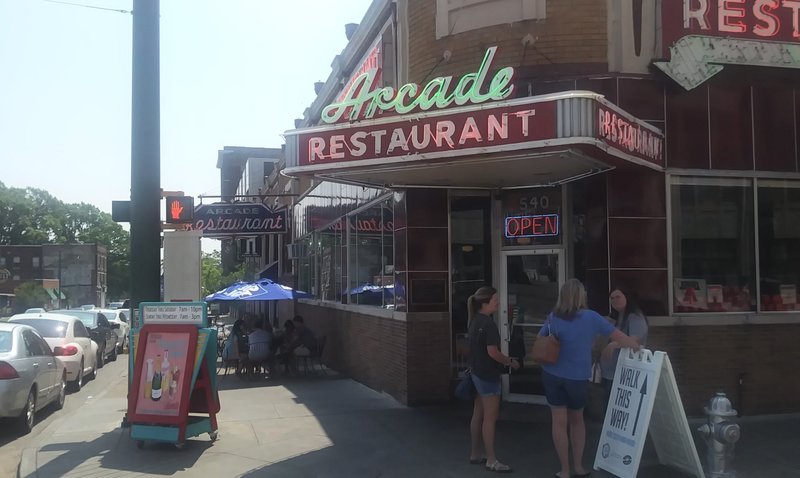 It put me back on track. I know I can’t save anybody by writing about eating habits that happen to be Southern traditions. I can’t claim any righteousness when it comes to advising people on what to eat and drink, because I’m certainly indulgent at times. And I know better than to judge anybody, because I know my mother, grandmother and great-grandmother (may she rest in peace) would have none of that. I realized that the city is doing what it knows how to do when it comes to comforting the people who’ve fallen in love with it. It’s not Memphis’ fault that any particular website says it’s making people fatter than other cities — it’s a much wider issue. It’s Southern. And it’s American. And it needs to be discussed.

As I drove back to Atlanta, I made a last-minute pivot to Oxford to have a meal at one of John Currence’s restaurants, City Grocery. I had the burger, plus a local beer. 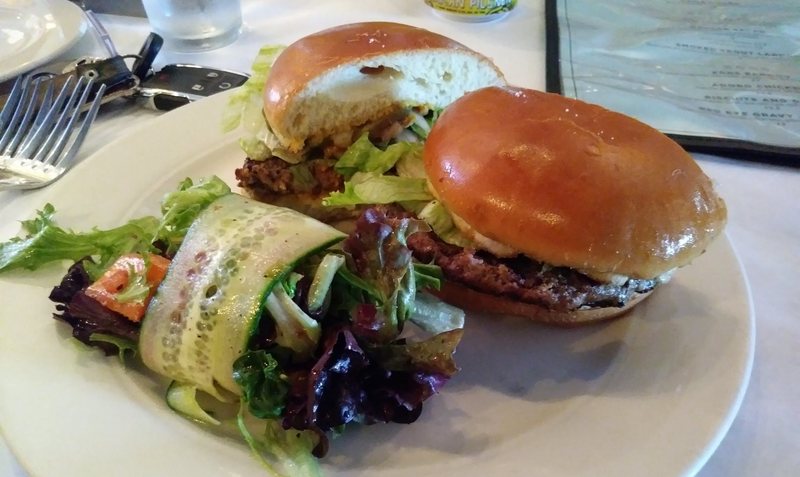 I left there and hit Square Books, just a few steps away, and purchased a photo book of puppies for my six-year-old daughter, along with a book about making money that I’ll share with my wife when I’m finished reading it.

I'm not sure if eating ribs and burgers, and buying books in Oxford after eating a really delicious omelet, qualifies me to criticize what I experienced during my Memphis trip. All I can say for sure is that I left with a sense of responsibility, and the knowledge that we all need to decide how the future of food in the South will be approached. And that means we as individuals must plan for such a future, as it relates to the health of society and sharing the knowledge we gain the same way we share dishes at a potluck.

My plan is to be a force for food education in the South, my homeland, while being as honest as possible about the challenges that we face. Memphis has a systemic problem it needs to address, just as the rest of the South does. I hope to be part of the solution that helps get us to a place where the blues are a thing we always appreciate, but as more of a sound and style of entertainment to be celebrated than a mood that only feeds our most unhealthy habits.