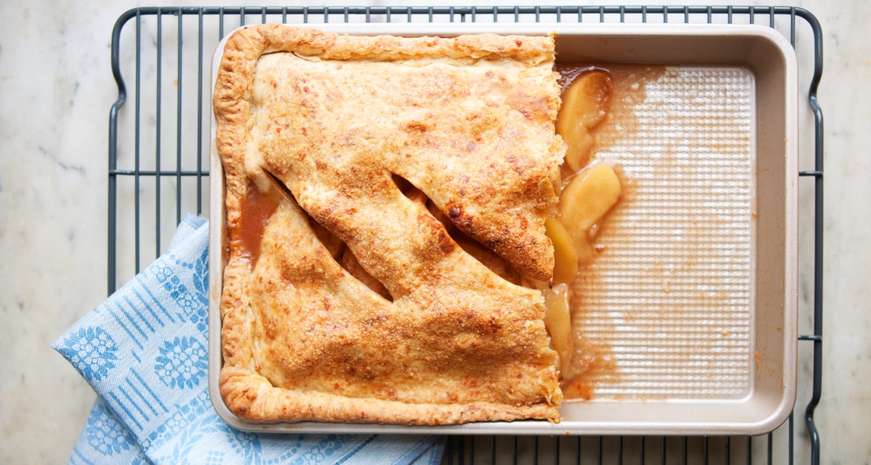 Even though peaches are considered the quintessential Southern fruit, the phrase “as American as apple pie” applies to the South, too. Every weekend during the fall across the South friends and families pile into cars and head to the mountains of Georgia, North Carolina, South Carolina and Tennessee to pick apples.

With the leaves changing color and a brisk nip in the air, this journey is one of the most quintessential, all-American, Norman Rockwell-esque forays of autumn. Many of the small towns throughout Appalachia host apple festivals, and all along the winding roads folks can stop and buy fresh apples to take home, as well as apple butter, apple jelly, apple bread, apple cake, fried apple hand pies, traditional apple pies, dried apples, apple cider and more.

Since colonial times, Southerners have grown apples as a year-round food source for both food and drink. In fact, back then, both hard apple cider and whiskey were consumed more often than water! Drinking water was often contaminated and alcohol had a longer shelf life than non-fermented beverages. If you or a neighbor had an apple tree, it wasn’t simply part of the landscape; an apple tree meant food.

Industrious farmers developed varieties adapted to the various climates and soils of the vast region. They tailored various cultivars for winter storage in the root cellar, and they put up preserves, dried apples and hard cider. When held in a cool cellar, apples lasted for months, providing much needed vitamins and nutrition in the winter. 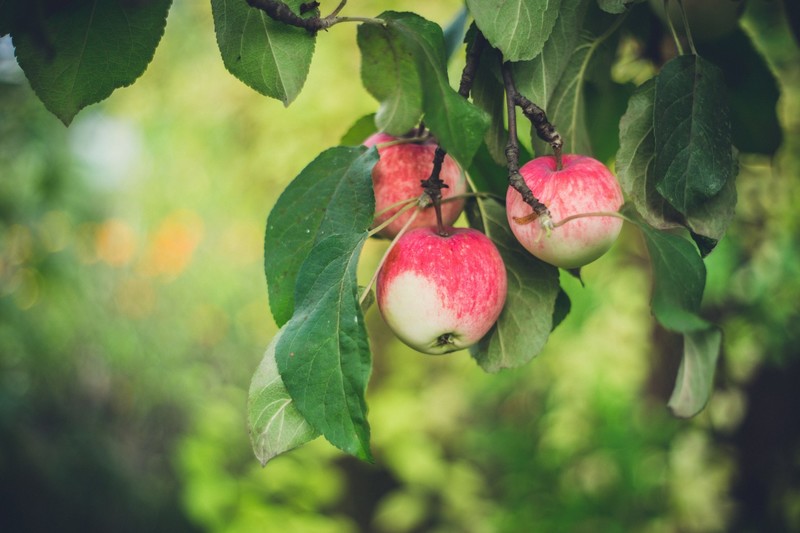 Beyond home use, apples — available in thousands of unique varieties — became a major commercial crop in parts of the South by the late 1800s. However, Prohibition led to the eradication of some of those early nurseries and, once the industry recovered, it settled on a handful of varieties, such as the ones found in the grocery store today, to promote worldwide. The rest were forgotten and became commercially extinct, at least until recent years. Indeed, many of today's apple growers are working to bring back some of those early varieties.

Many factors affect an apple’s characteristics: the age of the apple, the weather and climate where it was grown, and how it has been stored. In turn, these characteristics determine how each apple variety is best used. Some are great for cider-making, others better for eating out of hand, and still more (my favorite) are best for baking. 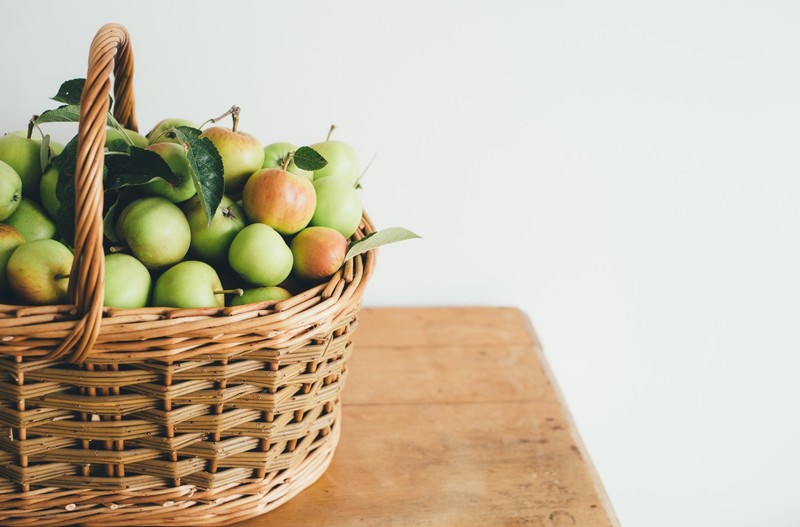 Here are a few suggestions:

Fuji apples are sweet and juicy with firm, red skin. They are among the most popular apples for eating fresh, but they're also great for baking.

Golden Delicious apples are sweet, with a rich, mellow flavor. They are some of the best all-around cooking apples, as they maintain their shape after baking.

Granny Smith apples are moderately sweet and have crisp flesh and green skin.

Honeycrisp apples are exceptionally crisp and juicy with a well-balanced flavor.

Newtown Pippin apples originated in the early 1700s and have firm, crisp, juicy flesh and a clean, highly aromatic flavor.

Winesap apples are firm and juicy with a sweet-sour flavor and sturdy, red skin. 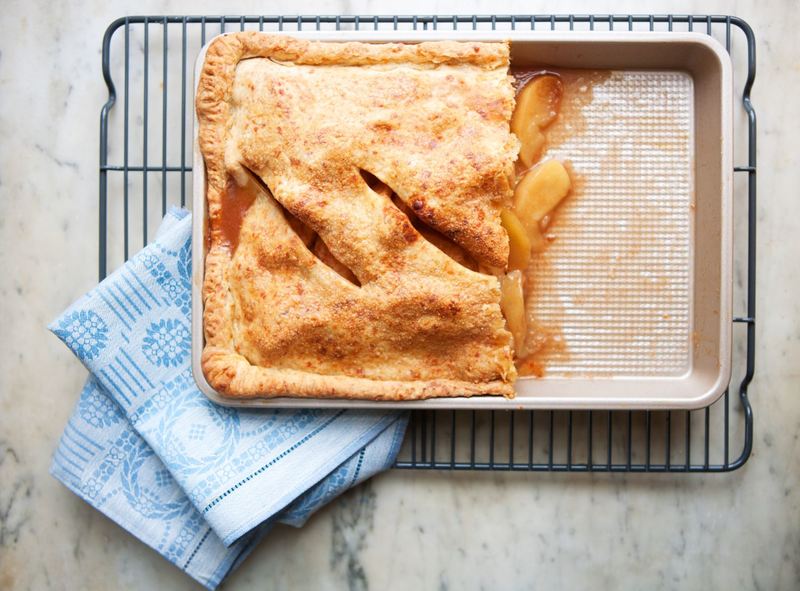 Instructions
To make the crust: In the food processor, pulse the flour, butter, cheese, and salt until the butter and cheese are in small pieces coated with flour, about 15 times. Add the ice water all at once and process until the mixture almost forms a ball. Form the dough into a 6- by 4-inch rectangle using plastic wrap and a bench scraper to firmly press the dough into a cohesive form. Wrap tightly and refrigerate a minimum of 4 hours.

Remove the dough from the refrigerator and allow it to warm slightly. Divide the dough into two pieces, one slightly larger than the other. Roll out the larger piece to 11 by 15 inches and place in the slab pie pan, pressing it into the corners of the pan and allowing the excess to drape over the sides. Refrigerate. Roll out the second piece of dough to 10 by 14 inches, place it on a lightly floured sheet of parchment, and refrigerate.

Heat the oven to 425 degrees; if you have one, place a baking stone, Baking Steel, or inverted baking sheet on the center rack to heat.

To make the filling: In a large bowl, mix together the granulated sugar, maple sugar, flour, cinnamon, and salt. Add the lemon juice and sliced apples and stir gently. I like to use my hands for this. Scrape the filling into the crust in the slab pie pan and top with the dots of butter. Place the top crust over the filling, trim, crimp, and slash.

With a pastry brush, paint the water across the surface of the pie, avoiding the edges. Sprinkle the maple sugar across the top of the pie. Bake (on top of the steel, stone, or baking sheet if using) for 20 minutes. Reduce the heat to 350 degrees and bake an additional 40 to 45 minutes. If the top gets too dark, tent with foil. The pie is done when the filling is burbling through the slashes.

Cool the pie thoroughly before serving. But if a warm pie is your heart’s content, slip the cooled pie in a hot 350-degree oven for 10 minutes before slicing. 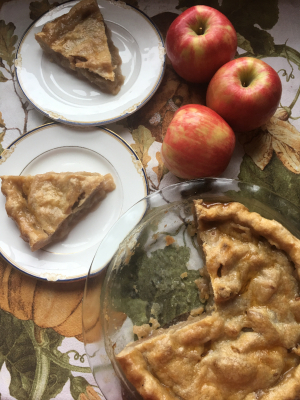 Homemade apple pie is a good thing, and we all get a blessing when somebody makes one and shares it with us. Make the crust or buy it at the store — either way, a homemade heavenly heartfelt apple pie is only a few steps and an hour of oven time away.
Serves: 8

Instructions
Heat oven to 400 degrees. Line a deep-dish pie pan with one sheet of pastry, leaving about 1 inch extended beyond the edge of the pie plate. Trim away excess and save for a future piecrust. Refrigerate the bottom crust while you prepare the apple filling.

Combine the sugar, flour, cinnamon, ginger, cloves, and salt in a medium bowl and use a fork to mix them well.

Peel the apples and quarter them lengthwise to make fat wedges. Cut away the stems and cores, and then slice each chunk into bite-sized pieces, enough to make six generous cups of apples. Place in a large bowl, add the sugar-spice mixture, and toss well.

Arrange sugared-and-spiced apples in the prepared piecrust, piling them high in the middle and thinner around the edges of the piecrust. Place the cold bits of butter all over the apples and then gently arrange the top crust over the fruit. Tuck the pastry snugly against the edges, and trim the overhanging crust to about 1 inch past the edge of the pie pan.

Press the edges of the bottom crust and the top crust together firmly, and trim again, so that you have about an inch of joined crusts extending up above the apple-line. Fold in inward and press to make a nice thick crust edge all around the pie. Then press with a fork to make a design, or pinch with your fingers, all around the edges. Anything goes, as long as the edges know to stay together forever.

Use a sharp knife or the tines of a fork to poke holes in the top crust. Make small vents all around the top so steam can escape as the pie bakes. Brush the top of the pie evenly with cream or half-and-half; or leave it as is. Place on a baking sheet and put in the center of the 400 degree oven for 15 minutes.

Lower the heat to 350 and set a timer for 45 minutes. Check the pie, and expect it to need another 15 to 30 minutes to become bubbly, handsomely browned, fragrant, and done. If in doubt, bake a little longer. If it’s browned well but still not done, place a sheet of aluminum foil lightly over the top of the pie.

Remove from the oven when bubbling, juicy, and hicely browned. Set on a wire rack or folded kitchen towels to cool at least an hour, or to room temperature. Serve at room temperature or warm, with or without ice cream or whipped cream. 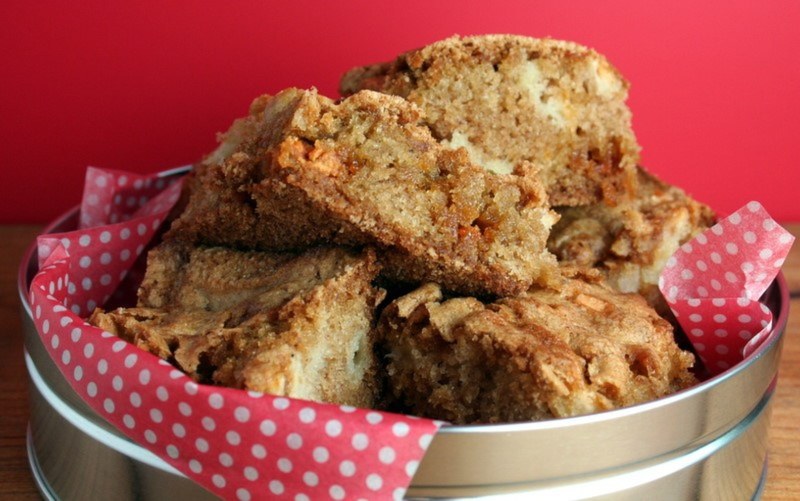 Instructions
Heat the oven to 350 degrees. Spray a 9-by-13 inch baking dish with cooking spray.

In the bowl of an electric mixer, thoroughly combine the oil, eggs and sugar. Sift the flour, baking powder, salt, soda and spices together in a bowl, then add to the oil mixture in the mixer, beating until thoroughly mixed. The batter will be thick.

Use a sturdy spoon to stir in the apple pieces. Scrape the mixture into the prepared pan, spreading it out evenly. Sprinkle the butterscotch chips over the top, pressing them into the batter lightly.

Bake for 45 minutes to one hour, until the golden and pulling away from the sides of the pan slightly. Cool thoroughly and cut into squares.